Edward Taylor and His Use of Metaphor

The Beauty of Metaphor

A Metaphor is defined as a grammatical device that “compares two different ideas by speaking of one in terms of the other. It asserts that one thing is another thing.” One of the best poets at using the metaphor is Edward Taylor, an intellectual New English Puritan. In his “Meditation One,” Taylor compares “God’s Matchless Love” to water, saying that it fills “Heaven to the Brim!” Then, in his “The Reflection,” Taylor says “Earth” was once a “Paradise of Heaven.

Don't use plagiarized sources. Get your custom essay on
“ Edward Taylor and His Use of Metaphor ”
Get custom paper
NEW! smart matching with writer

Edward Taylor’s use of Metaphor in “Meditation One” helps portray his message of Gods never ending love for us. In Line 7, Edward Taylor starts the sentence of by saying “Oh, Matchless Love!filling Heaven to the Brim!” Taylor compares the incomparable love of God to water, as he says it will fill heaven “to the brim.” By using the verb “filling,” the reader automatically thinks of something more relatable to his knowledge, water in context to a drink. When one pours water in, the water fills the cup.

Ultimately, through his diction choice and use of metaphor, Taylor considers God’s love to be something that fills humanities’ needs. Since it can fill “Heaven,” it can fill our souls with a never ending joy. This is why Edward Taylor’s use of metaphor is so effective, it ulaitmely leads to a bigger, more important conclusion that can be easily derived through his relatable examples. This metaphor, in comparison to the one in “The Reflection”, is more effective as it plays a vital role in the establishment of a major theme in the poem.

Edward Taylor’s use of metaphor in “The Reflection” helps portray his message that Earth was once a heavenly place until it was corrupted with sin. In Line 19, Edward Taylor starts the sentence off by saying “Earth once was Paradise of Heaven Below.” 1Divine life, living and dead, whatever the case may be, existed on Earth at one period of time, until the corruptness of sin took over the Godly world. In this metaphor, Edward Taylor says that Earth once “was” a Paradise of Heaven Below, or, in other words, that Earth was once a Heavenly place. In this case, Taylor’s metaphor is much more simple, he calls one thing something else. The metaphor’s main puropose in this case is to call earth, in a past time, a Godly place, until the sinful nature of Adam and Eve led to the abolishment of Earth’s divineness Due to its simplistic nature, and the message that it emphasizes, this metaphor is not as effective as the previous metaphor.

In conclusion, Edward Taylor uses metaphor to perfection.2 To think brillianty and to write brilliantly are two completely different things, and Edward Taylor does both. In both cases, Edward Taylor uses metaphor to call one thing something else. In “Meditation One,” He calls God’s love water, and in “The Reflection,” calls Earth a once Divine place. Ultimately, in “Meditation One,” his use of Metaphor is more effective because it conveys a more important message of God’s undeniable love for us.

Edward Taylor and His Use of Metaphor. (2016, Apr 04). Retrieved from http://studymoose.com/edward-taylor-and-his-use-of-metaphor-essay 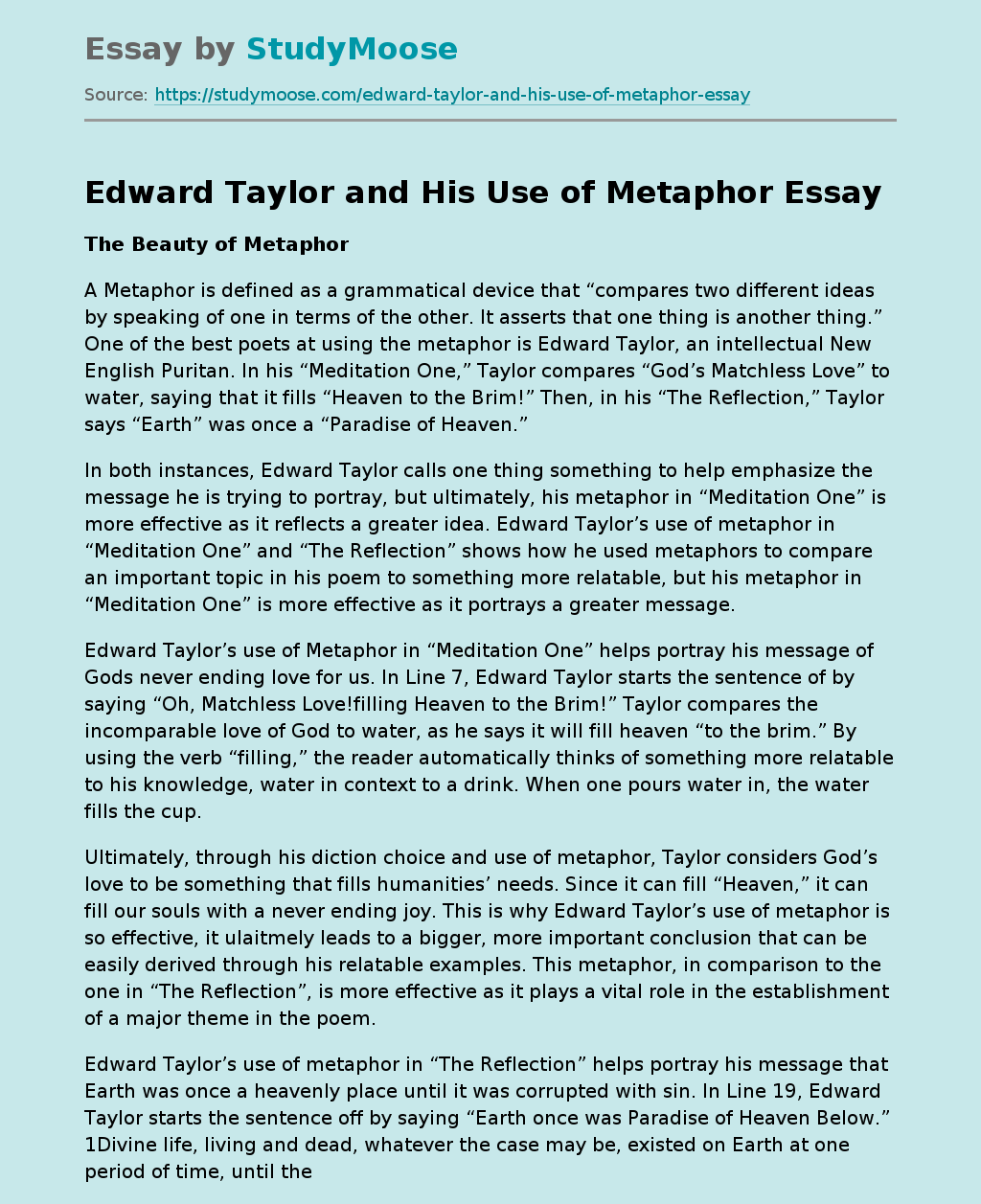