The Stolen Boat as an autobiographical poem

The excerpt, “From the Prelude” has been taken from William Wordsworth’s autobiographical poem, ‘The Prelude’, which consists of fourteen books. This poem has been taken from Book I, the subtitle of, “From the Prelude”, and it is written in blank verse in which the poet has recorded his early life. In this book, the poet records the different stages by which his love for Nature underwent a change. As a child, the poet had an animal love of Nature.

Turn in your highest-quality paper
Get a qualified writer to help you with
“ The Stolen Boat as an autobiographical poem ”
Get high-quality paper
NEW! AI matching with writer

When he grew up, this love was changed into sensuous love of Nature. The poet learnt to love and enjoy the different colours, shades, smells, and sounds of Nature.

When the poet became mature, he developed a spiritual love for Nature. Wordsworth said “Nature is our friend, philosopher and guide. Nature never betrays the heart that loved her. Nature kindles noble ideas in our heart and checks our evil impulses.” This poem mainly talks about, one of his memorable incident of his childhood.

In the chosen poem, Wordsworth has shown how his love of Nature was developed. Wordsworth’s childhood days were spent in the midst of beautiful sights and sounds of Nature. As a child, Wordsworth looked upon Nature as a source of a scene for pleasure like skating, riding, fishing and walking. Wordsworth was more concerned with the physical aspect of Nature.

Wordsworth developed a passion for the sensuous beauty of Nature. The French Revolution opened his eyes and made him realize the dignity of common man. During this period his love of Nature became linked with the love of man.

The revolution humanized his soul and built him into a poet of man. The French Revolution taught Wordsworth that every human being was intrinsically great and capable of infinite development.

The elementary feelings, the essential passions of the heart are at their purest and simplest, he found, in humble and rustic life. These are the powers in human nature which are like the primal energies of Nature, their strengths, beauty, and force seem to spring from the same source. He considered man and nature as one. (Class 12 course, notes, 2006) In this poem, we find many passages in which Wordsworth strangely expresses his belief in the inner life of nature. Once he had stolen a boat to explore the silent lake in the evening, he felt as if a huge mountain peak uproared its head.

“I struck and struck again,
And growing still in stature the grim shape
Towered up between me and the stars, and still,
For so it seemed, with purpose of its own
And measured motion like a living thing,
Strode after me.”

These lines are remarkable for the sense of guilt that the poet feels, after having stolen a boat. While enjoying rowing the boat that moved like a swan, the poet was much disturbed by the awful shape of a black mountain peak, growing larger in stature and following the poet with a measured step. The child-poet trembled with fear and at once retreated from the place to reach home. Wordsworth is not merely poet of Nature, I would say that he is a prophet of Nature. To him Nature is the educator of senses and mind alike, and sower in our hearts of the deep laid seeds of our feelings and beliefs. His childhood experiences taught him that if we do anything wicked, we will be punished by Nature. The poet talks about his personal experience with great honesty and sincerity and tries to extract a moral from it. The poem makes a delightful reading simply because the poet is very sincere about his ideas. The poetry of Wordsworth soothes our minds. 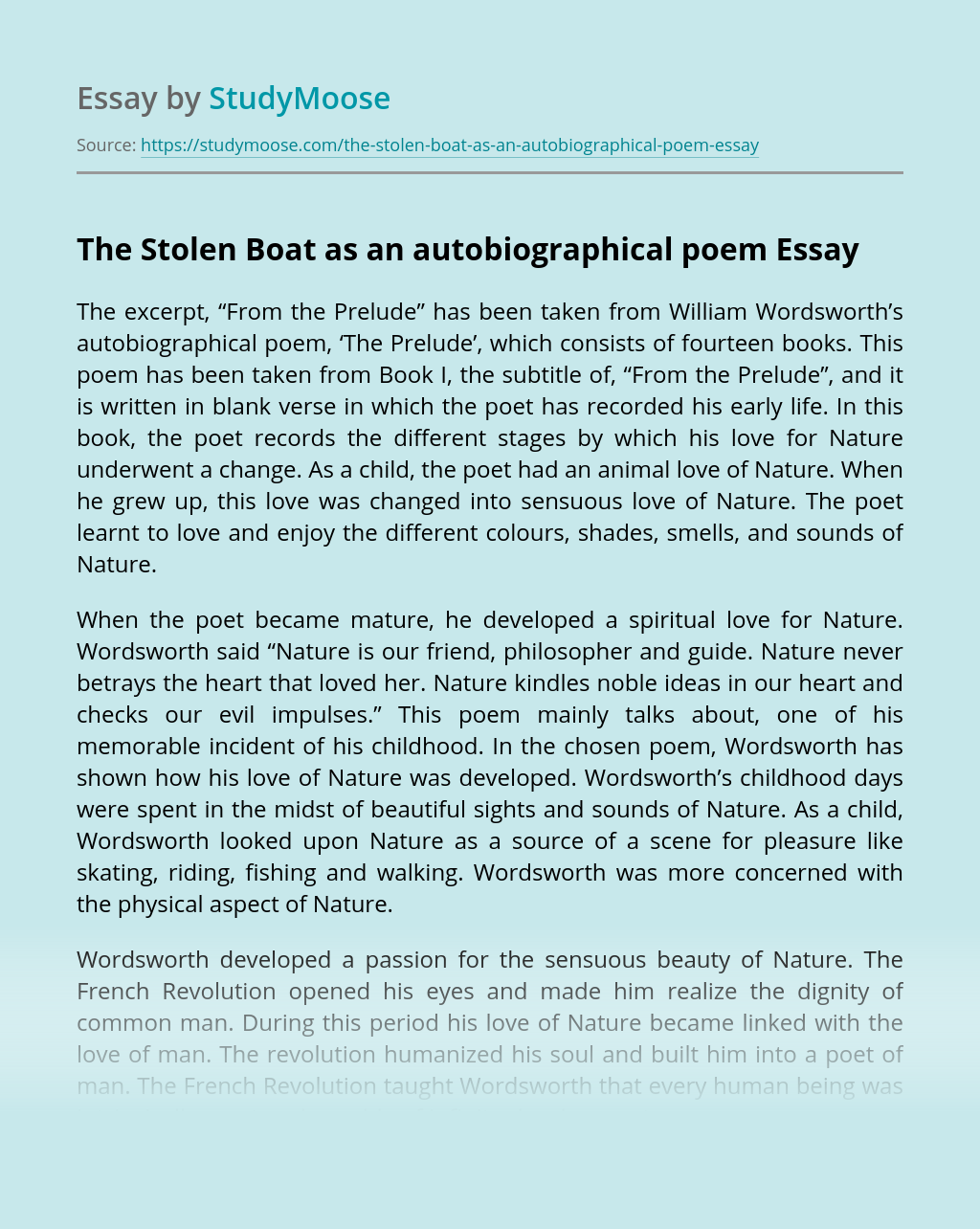 Turn in your highest-quality paper
Get a qualified writer to help you with
“ The Stolen Boat as an autobiographical poem ”
Get high-quality paper
Helping students since 2015
Stay Safe, Stay Original