It is amazing how many things we take for granted. We make plans for the day, and don’t think twice about how those plans can be taken away in the blink of an eye. I never thought as much about it myself, until I faced with the shock, and undeniable truth of my grandfather’s death. I don’t think anyone really thinks about tragedy until they are actually faced with shocking news. Of course at the time I was only 10 years old and the word death has never even crossed my mind even once.

Turn in your highest-quality paper
Get a qualified writer to help you with
“ Autobiographical Incident ”
Get high-quality paper
NEW! AI matching with writer

I remember I never really liked or even wanted to spend anytime with my grandfather, all he did was scold and punish me. However, I realize I will never be the same because after learning about his life, I regret not even getting to know him before his unfortunate death, just 5 minutes would’ve been enough.

Just thinking back all I could ever remember of my grandfather was that he never showed any emotion; never said he loved anyone, never said whether or not he was having a good time, he showed no emotion what so ever.

Maybe once in awhile he would flash a tiny smile but other than that he never expressed anything. I was always wondering why he always looked so mad, maybe because he is old? Or maybe because he was having a bad day? Three years after his death, after all of my relatives have calmed down, I took the initiative to ask around the family to get to know him.

Can you imagine all the suffering and pain? At age 19 he was kidnapped by the North Korean army and forced to fight for the “greater good”. Without even a notice, a goodbye, or the sight of his parents he was taken to fight, for all he knew that would be the last time he ever saw his parents. Just even typing this essay wants to make me throw up and cry, I can’t even imagine all the stress and pain he could’ve gone through. Dead people everywhere, women, children, and soldiers as well as friends. After the war had ended on July 27, 1953 my grandfather had the chance to stay in South Korean territory and receive asylum as a South Korean citizen where he met his brother after 5 years. From there he married my grandmother and life goes on.

My grandfather was great man, after realizing what he had gone through my view on him had changed. His habit of not expressing his feelings? I finally understood it all, the pain he had gone through- after tasting blood and seeing your friends die all around you how much more can you suffer? Looking back I remember at his funeral, looking down into the coffin, “Who is this old man? Why did I never take the time to get to know him better?” Hearing all the eulogies my cousins gave was like talking to him again, I got to know his favorite ice cream flavor, his favorite place to fish, favorite book, song, and so on.

I will never view my grandfather the same way after this experience. From being the old man who scolded me everyday into the great man who survived 2 great eras of history and I finally understood, he couldn’t say it but those short tiny lasting smiles were his ways of saying I love you, his deep laughs were apologetic gestures, and scolding me was a way of saying he loved me, his grandson. As I recall I never felt miserable or even slightly sad at the time of his death, and I regret that. I regret never taking my chances while he was still alive, just one more yesterday would have been enough for me to tell him that I loved him and thank him for raising me and called me his favorite grandson.

It has been eight years since that day, and sometime I still hope that it was all a dream. But nothing is more certain in life than death. I wish he was still alive, oh how I wish he could have seen me graduate middle school and see me graduate high school as well as all the achievements that I had conquered. It hurts to know how I will never get another chance to talk with him again, but I know she is up in heaven watching over me and waiting for the day until I can see him again. A life can change drastically at any moment. Don’t take life or the people that you love for granted, some feelings are expressed through one way or another. Of course most of all I regret not ever getting the chance to know him truly as he was. My loving grandfather. 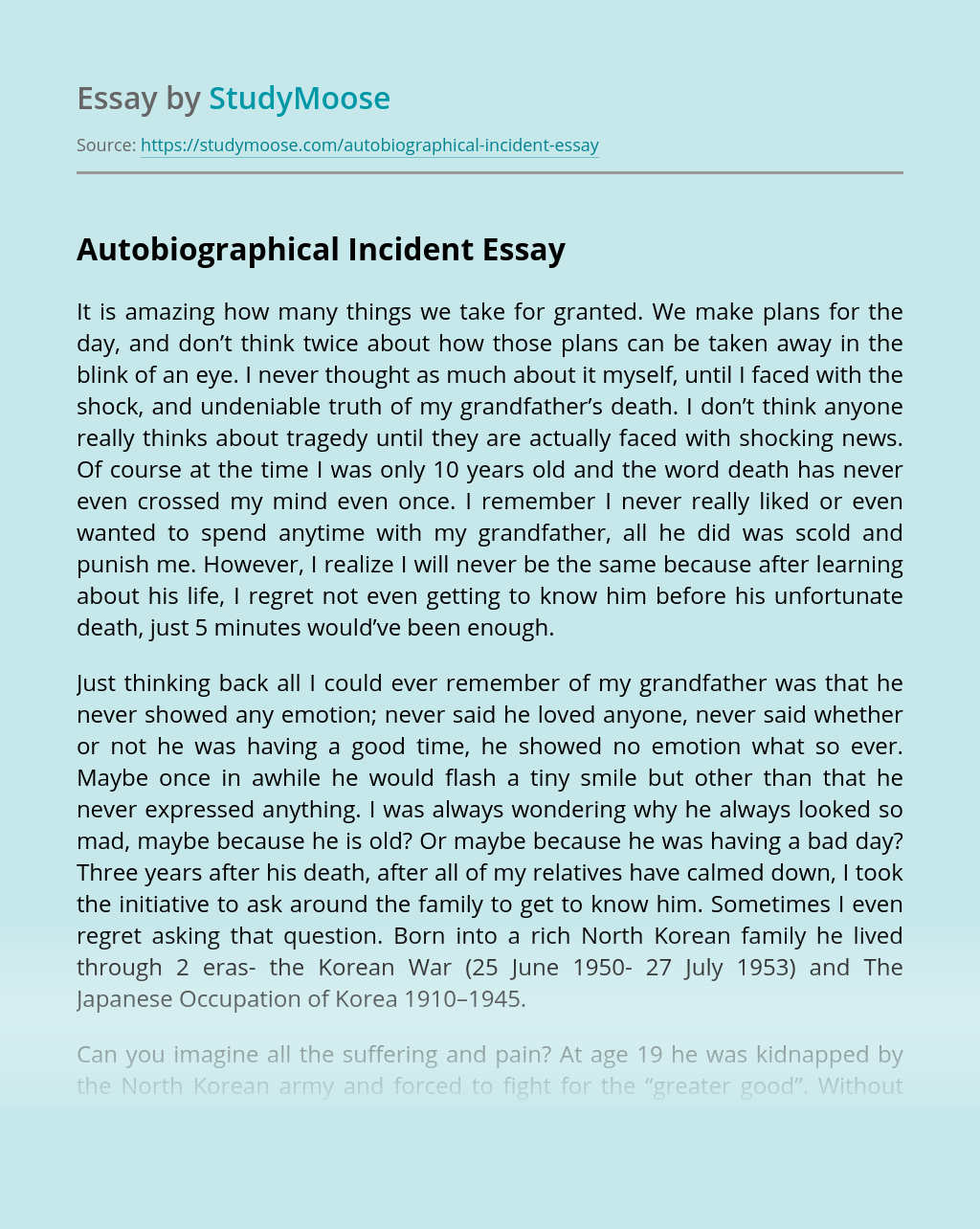 Turn in your highest-quality paper
Get a qualified writer to help you with
“ Autobiographical Incident ”
Get high-quality paper
Helping students since 2015
Stay Safe, Stay Original