How tone is created in the story Of Clay are we created?

Tone is the attitude the author shows towards the story. And of Clay Are We Made written by Isabel Allende is a story where the author focuses on tone through setting, characterization, conflict, theme, special techniques, and diction. Where the price of human life is nothing, and the leaders are more concerned with other problems. The story takes place in Columbia, South America. For the author talks about the natural disaster taking place, and killing many leading it to create a sad tone.

Don't use plagiarized sources. Get your custom essay on
“ How tone is created in the story Of Clay are we created? ”
Get custom paper
NEW! smart matching with writer

“In that vast cemetery where the odor of death was already attracting vultures from far away, and where the weeping of orphans and wails of the injured filled the air. ”(Page 586) Hence making it obvious that the author is sad. The characters in this story are the Narrator, Rolf Carle, and Azucena. “The girl could not move, she could barely move, but she did not seem desperate, as if an ancestral resignation allowed her to accept her fate.

Proficient in: Human Life And Environment

”(Page 589) Azucena is stuck in the mud for she is pulled downwards by the corpses of her brothers and sisters, creating a sympathetic tone.

Isabel clearly creates an admiring tone, when the narrator admires Rolf Carle for staying with Azucena and tries to help her. “Azucena and Rolf were by my side; I knew everything my love did to wrest the girl from her prison and help her endure her suffering. ”(Page592) Therefore, the author creates an admiring and sympathetic tone through characterization. There is a conflict between Rolf and himself, when he understands that he can no longer run away from his past.

“It was impossible for Rolf to flee from himself any longer, and the visceral terror he had lived as a boy suddenly invaded him. ”(Page 593) Furthermore the internal conflict that takes place in the story builds up a thoughtful tone. The Theme in this short story is about the objectivity of reporting which creates a sympathetic tone. Emphasizing on the fact that even the reporter that is considered objective has feelings, and might be affected by the events and tragedies he or she sees.

“Camera had a strange effect on him, I came to realize that this fictive distance seemed to protect him from his own emotions…your cameras lie forgotten in a closet”(page 588) In this excerpt the narrator is describing Rolf Carle, and states that when he was on air he was a different person. The camera had a strange effect on him, but later on after Azucena’s death he seemed to change and could no longer hide his emotions. The author uses special techniques in this story to build up tone. Isabelle foreshadows Azucena’s death and creates a sad tone.

“A doctor stated that she had fever but added there was little he could do: antibiotics were being reserved for cases of gangrene. ” (Page 592) Isabelle’s choice of words referred to as diction; is direct and filled with the narrator’s feelings. The author Isabelle Allende creates a sympathetic, admiring, sad tone through setting, characterization, conflict, theme, foreshadowing and diction. A natural disaster kills thousands of people; an objective reporter faces himself after meeting a young girl.

How tone is created in the story Of Clay are we created?. (2016, Jul 18). Retrieved from https://studymoose.com/how-tone-is-created-in-the-story-of-clay-are-we-created-essay 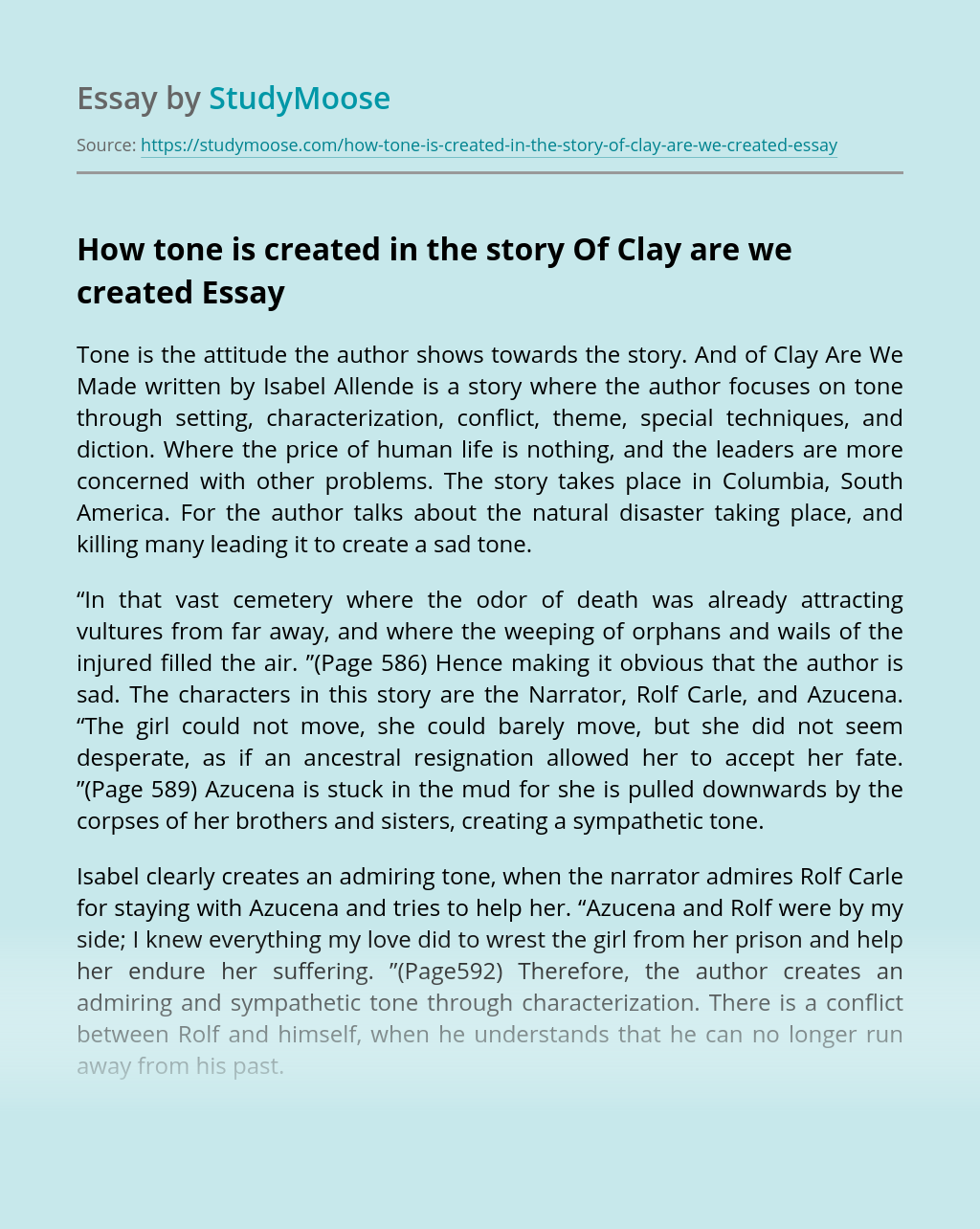