Tone and mood greatly affect the way readers precieve a poem, essay, story, etc. Tone is how the author feels about what he/she has written. A tone can be either positive, negative, or neutral and is given through context clues such as setting and word choice. Tone may change throught a piece of writting. Moo is how the writer wants the reader to feeland is generated through the setting, dialouge and plot. Mood can either be positive or negative and like tone can change throught the writting.

Don't use plagiarized sources. Get your custom essay on
“ Tone and Mood ”
Get custom paper
NEW! smart matching with writer

Tone and mood are evident in Edgar Allen Poe’s “The Raven”,Tim O’Brian’s “on the Rainy River”, “Man In the Water” by Roger Rosenblutt and “The Lottery” by shirely Jackson.

“The Raven” a gothic poem writen by Edgar Allen Poe about a man greifing over lost love, has a melancholy tone. Throught the poem the narrator goes through several stages of grief over the loss of Lenore (his deceased love) and when the black bird comes through his window repeating the single word “nevermore”, each times the narrator hears it it gives him less and less hope.

Another example of the poems melancholy tone is in line seven: “It was in a bleak December” (7). This creates a feeling of coldness and despair.

The mood for “The Raven” is lonelyness. Poes creates the mood through word choice and setting. For example when the narrator says “But the silence was unbroken, an the stillness gave no token, And the only word there spoken was the whispered word, “Lenore?” This I whispered, and an echo murmured back the word, “Lenore!” Merely this, and nothing more.

“On the Rainy River” is a short story about a mans internal conflict of weather or not to fight in a war he is morally against,written by Tim O’Brian. This short story has a reflective tone. One example of this is when Tim says “I was too good for this war. Too smart, Too compassionate,…I was above it.” (629) This demonstrates how he feels about himself and about th war. Another example of the storys reflective tone is when Tim says ” It was a moral splt. I feared war but i also feared exile.” he could not decide weather to go to Canada or to Vietnam. He is apposed to both ideas, but he needs to choose which is less terrifying. The mood for this story is sympathy, because of Tim’s tough decision the reader feel for him.

“Man in the Water” an essay by Roger Rosenblatt, about a man who saves his fellow passangers instead of himself when their plane crasses into water. This essay has no distinguishable tone but the mood is sadness. The mood is created from the deaths of several in the same circumstances. It’s a heartbreaking feeling that affects everyone who reads “man in the Water”

“The lottery” ,a short story about a towns annual summer tradition written by Shirely Jackson, like “Man in the Water” also has a neutral tone. The mood for this story is shock. The shock comes from page nine when the reader finds out the towns lottery is ritural sacrifice and that she will be stoned to death.

Tone and mood are very important when it come to readign and understanding literature. They give the reader a better sense of what is going on in the story, how characters and the author feel, and how they themselves feel about what they are reading. Tone and mood, because they are constantly given throughout the story, they help you better understand contex, setting, character,and how you are supposed to feel about what you are reading. 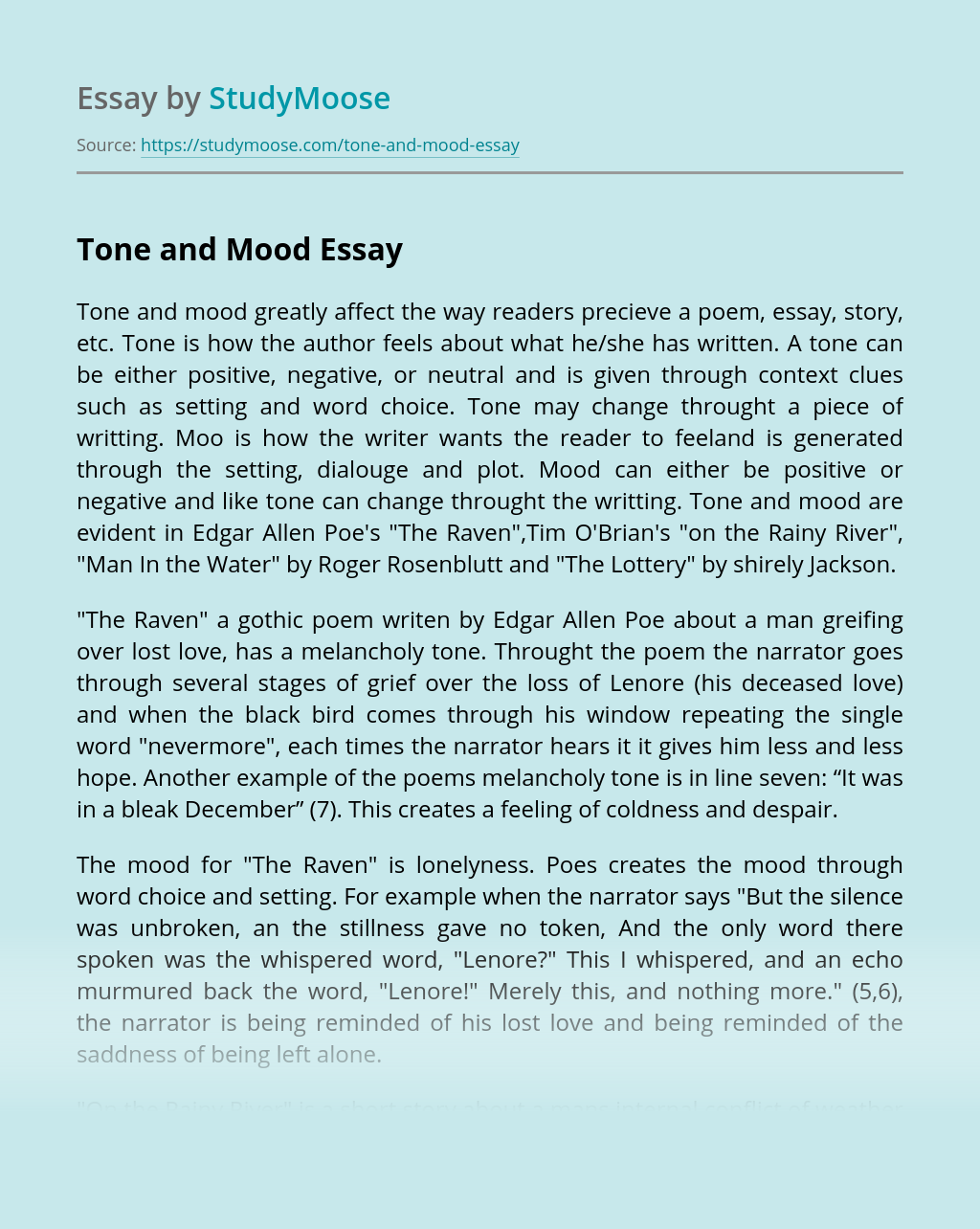