"My Last Duchess" by Robert Browning

Robert Browning sets the tone of “My Last Duchess,” by using three significant poetic techniques, one of which is imagery. Browning uses the Duke’s monologue to sketch out images in the reader’s mind of the Duchess herself, and the sinister personality of the Duke. Browning also uses another key device, which is diction to illustrate the darkness in this poem. Browning’s careful word choice adds to the description of the Duchess and perhaps her disgraceful behavior, as well as the Duke’s terrifying jealousy, and expectations.

Finally, Browning also uses symbolism, which is instrumental in showing the Duke’s jealousy, which possibly could have led to the Duchess’ demise. Robert Browning is able to achieve a haunting, mysterious, and eerie tone in “My Last Duchess,” by using imagery, precise diction, and symbolism.

The imagery in “My Last Duchess,” conveys a clear picture in the reader’s mind of not only of the Duchess, and her portrait, but also the darkness of the Duke’s life.

The Duke begins his soliloquy by saying, “That’s my last duchess painted on the wall, / Looking as if she were alive,” (1-2) already the reader is hit with the image of the late Duchess’ portrait. A mysterious tone lurks as the Duke speaks because the reader now wonders how the Duchess died. As the Duke continues with his speech, he vividly paints a picture of the Duchess. The Duke recounts how the painter, Fra Pandolf compliments her beautiful skin by saying, “Paint / Must never hope to reproduce the faint /Half-flush that dies along her throat” (17-19).

As the Duchess blushes at Pandolf’s kindness, the Duke’s jealousy is building up. As the Duke and his guest make their way downstairs to meet the rest of the company, the Duke says, “Notice Neptune, though / Taming a sea-horse, thought a rarity” (54-55). The image of Neptune as he tames the sea horse is a perfect example of the Dukes temperamental, and controlling personality. This image reflects his domineering disposition, which adds to the haunting, eerie tone.

An eerie and mysterious tone is further enhanced by Browning’s use of diction. Browning’s particular word choice in this dramatic monologue steers the reader to believe that over time the Duchess’ flirtatious nature becomes more difficult for the Duke to handle. As he says to the emissary, “Sir, ’twas not / Her husband’s presence only, call that spot / Of joy into the Duchess’ cheek,” (12-14) the Duke begins to explain how she is charmed by anyone, and “too easily impressed” (24). In addition to being overly impressed by gifts from “officious fools,” (27) the Duke is especially upset as he says, “she ranked / My gift of a nine-hundred-years-old name / With anybody’s gift.” By marrying the Duchess the Duke gave her the gift of nobility, and she now holds a higher social rank. He feels that that gift alone should maintain her happiness, and commitment to him.

The Duke’s anger, and jealously have now escalated, and the reader begins to question what his madness will carry him to do. Another meticulous selection of words Browning uses is, ” Oh, sir, she smiled, no doubt, / Whene’er I passed her; but who passed without / Much the same smile? This grew; I gave commands; / Then all smiles stopped together.” (43-46) The poem has now turned very mysterious, how was the Duchess executed, and who other than the Duke is responsible?

Browning is able to make the Duke’s controlling nature apparent through the use of symbolism. The Duke’s need to be dominate and in control at all times is frightening. The portrait of the late Duchess is a symbol to show the Duke’s dominance. The Duchess had slightly rebelled against the Duke, and he questions her fidelity when he says, “She thanked men, good! But thanked / Somehow I know not how” (31-32). The Duke was distraught that he was unable to control her innocent blushes, or friendly smiles at others. It finally came time for the Duke to take matters into is own hands, he then, “gave commands,” (45) and “then all smiles stopped together” (46). The art is a symbol that he is now able to control her every glance and every smile. Not only does he now have complete control over her, his guests are only allowed to see her when he draws a curtain and permits them to. It is exceptionally haunting that the Duke is so obsessed with having the power to control someone.

The imagery brought to the reader’s mind as the Duke is entertaining the emissary is chilling. Browning’s comparison between the Duke and Neptune increase the mysterious effect. As the Duke explains that he refuses to allow his next wife to behave the way the late Duchess did, mystery sets in as it makes the reader question if he is capable of committing this crime again, and how the Duchess was brought to her demise. Browning’s word choice also enhances the mystery and eeriness of the poem. By using diction, the Duke’s controlling personality was described. Finally, Browning uses the Duchess’ portrait as a symbol

In conclusion, Robert Browning achieved a haunting, mysterious, and eerie tone through the use of three poetic techniques.

"My Last Duchess" by Robert Browning. (2016, Jun 21). Retrieved from http://studymoose.com/my-last-duchess-by-robert-browning-essay 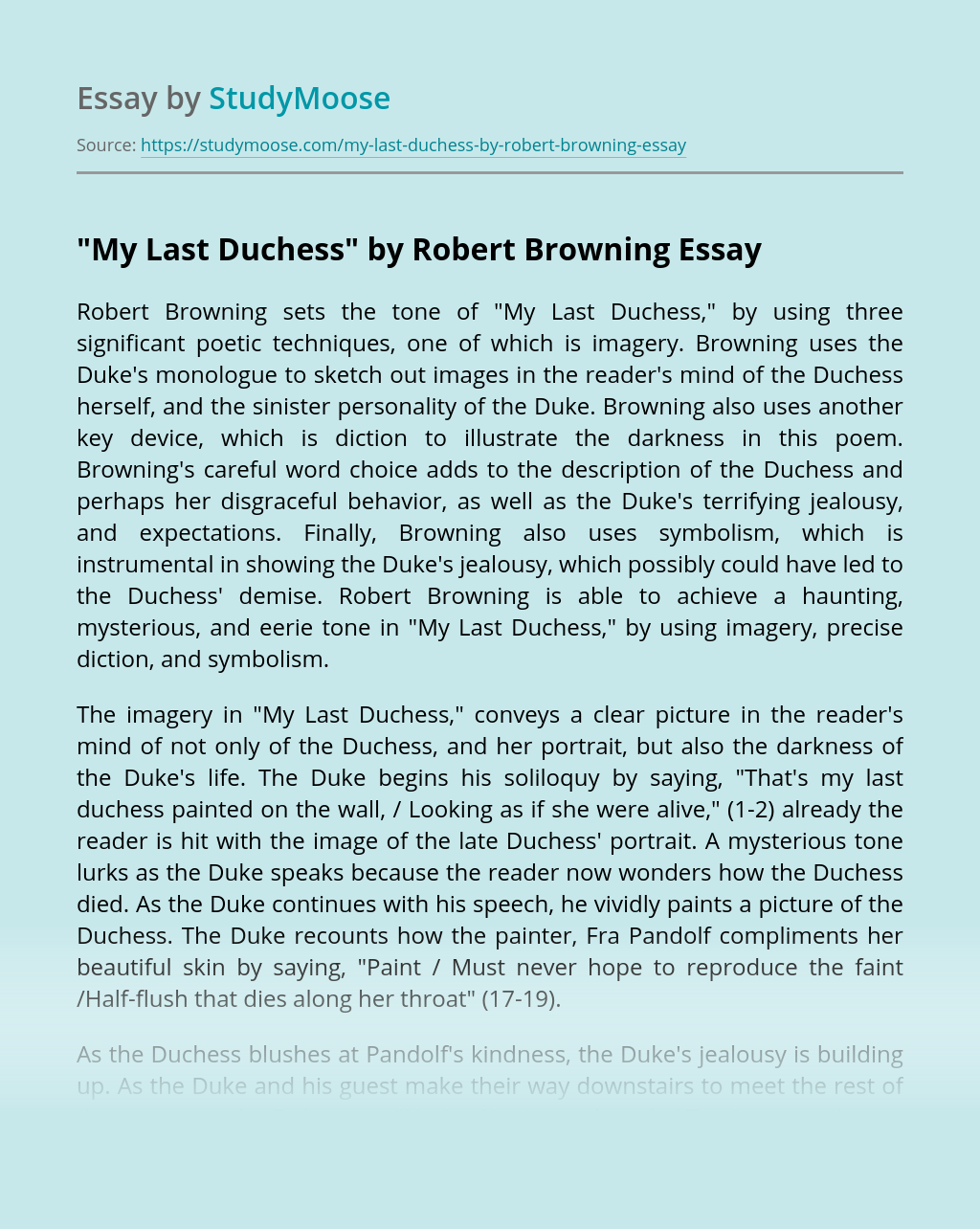 Don’t waste time
Get a verified expert to help you with “My Last Duchess” by Robert Browning
Hire verified expert
$35.80 for a 2-page paper
Stay Safe, Stay Original