Monologue and Attitude Revealed through Browning’s ‘My Last Duchess’

The 16th century poem My Last Duchess by Robert Browning is a monologue of a Duke showing an audience the painting of his late wife. Browning, in this poem, as in many of his poems, uses monologue to reflect on the concepts and notions of his time.  This particular monologue reflects on the perception of women in the 16th century, and in particular, aristocratic women.

In this particular monologue, like many of Browning’s monologues, we get not only a feeling for the Duke’s character, but also a feeling about the expectations of a particular class and a particular gender—basically, a women must be obedient to her husband, and any independence is frowned upon.

Don't use plagiarized sources. Get your custom essay on
“ Monologue and Attitude Revealed through Browning’s ‘My Last Duchess’ ”
Get custom paper
NEW! smart matching with writer

Browning typically used monologue in many of his poems to use this affect—basically, he creates a character to reflect on his own feelings of society, but by using the character, he is able to somewhat mask, or hide behind, that character’s observations.

In this monologue, we see the Duke as a particularly jealous man.

His suspicion would be easily aroused every time his wife thanked someone, especially if it was another man, for a small favor done to her.

The Duke thinks that his “gift of a nine-hundred-years-old-name (line 33)” was the most valuable gift his wife received from her and thus, she should have not just given away her smile and blush for anyone but him. He saw this attitude as a kind of stooping down on her part and in turn, an insult on him and his position in society.

The monologue thus reveals a lot about the main character that is speaking, and in this poem, it is the Duke:

The style and structure of this poem play a significant role in the
effect of the poem.  As is typical of Browning’s poems, “My Last
Duchess” is written as a dramatic monologue: one speaker relates the
entire poem as if to another person present with him.  This format suits
this poem particularly well because the speaker, taken to be the Duke of
Ferrara, comes across as being very controlling, especially in
conversation (My Last Duchess Analysis).

When he got tired of these exchanges of smiles between his wife and other people, he “gave commands;/ Then all smiles stopped together (Browning, lines 45-46).” This ambiguous statement gives the reader a clue as to how the Duchess became an ex-wife. It is not specific, however, so that one can only guess as to what happened—maybe he had her killed or sent her away where she died.

From these absurd, oftentimes ridiculous, and obviously arrogant words, the reader can conclude that the Duke was a controlling husband. Lines 50 onwards tell the reader that the Duke is looking for a new wife and the person whom he is showing the painting to, is the assistant or messenger of a Count whose daughter the Duke is eyeing as a prospective wife. The talk he would have later with the Count would be about the arrangement of his next marriage (My Last Duchess Discussion).

The Duke represents the traditional male and his attitude towards his late wife mirrors the attitude and expectations of a patriarchal and Victorian society towards women in his monologue. The society of that time expected women to simply obey. She should only reserve her charms for her husband. She must not even try to be beautiful in her own painting. The mere act of being happy, pleasant to anyone regardless of rank and stature in life, and to love the simple pleasures in life as watching the sunset or riding a mule in the case of the Duchess, were all considered acts of unfaithfulness.

In short, it was a sin to be naturally beautiful and to have a happy disposition. Men liked to control their wives. Being the only one who could open the curtain to reveal the painting of his beautiful and smiling late wife is symbolic of how this man would do anything to control his wife. If he couldn’t stop his wife from smiling at anyone when she was still alive, at least when she was dead and only lived through her painting the Duke could finally decide as to whom to share his wife’s smiles and charms.

Through the painting done by a master, she has also became the expensive commodity that she should have been while living, but a role of which she never assumed because she stooped to being accessible to anyone, much to the disappointment of her husband, the Duke. Noble women should assume the position that their rank in society expected them to and this meant they should be unreachable in the eyes of commoners. They should not be easily pleased with trifle matters like favors from servants.

Finally, the talk of arranging his new marriage with the father of his future bride suggests how women were not allowed to express an opinion even to the important topic of whom to spend the rest of their life with. Women were commodities traded upon by men and they have price tags called dowries. By showing the Count’s emissary the painting of his former wife and telling him why he didn’t like her conduct sends the message as to how he expects his next wife to behave. Otherwise, she might become another Last Duchess, another hidden painting in the house.

Therefore, this monologue, like many of Browning’s monologues, reflects on his interpretations of his society.  However, by using a character’s reflections on a particular thought, Browning can somewhat mask his inner feelings and thoughts.  The aspects of his reflections come across clearly, and in this monologue, Browning is obviously taking a deeper look at the treatment of women.

My Last Duchess Discussion.  2008 May 14.  2011 May 4. <http://www.englishforums.com/English/LastDutchessDepthAnalysis

Monologue and Attitude Revealed through Browning’s ‘My Last Duchess’. (2017, Apr 27). Retrieved from https://studymoose.com/monologue-and-attitude-revealed-through-brownings-my-last-duchess-essay 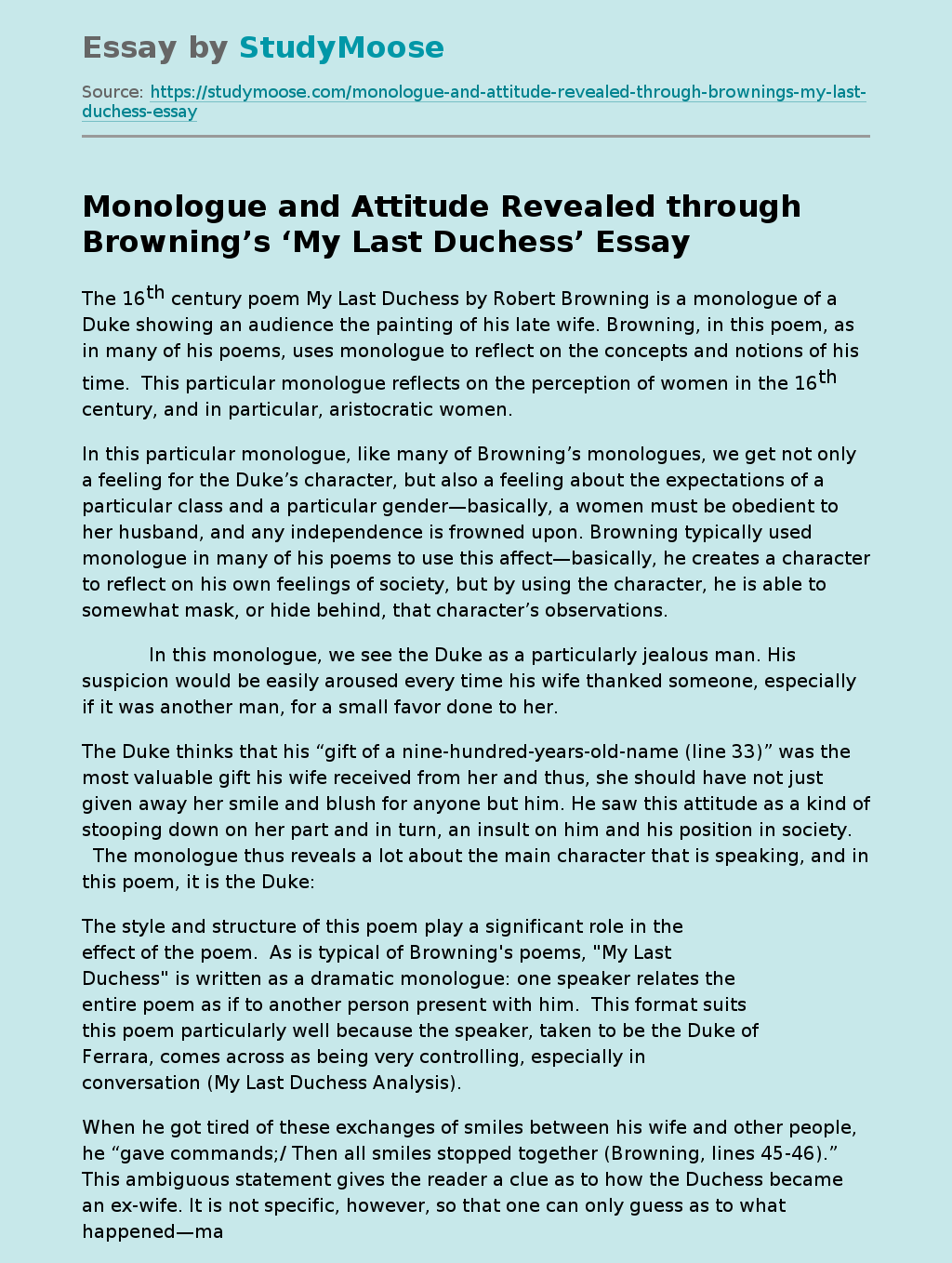