William Golding’s Psyche Revealed Through the "Lord of the Flies"

“I began to see what people were capable of doing. Anyone who moved through those years without understanding that man produces evil as a bee produces honey, must have been blind or wrong in the head” (Biography). William Golding lived through both World Wars and participated in one he was able to see the “real world,” with these experiences and his beliefs, he was inspired to write this book. Golding once said: “It was simply what seemed sensible for me to write after the war when everyone was thanking God they weren’t Nazis.

Don't use plagiarized sources. Get your custom essay on
“ William Golding’s Psyche Revealed Through the “Lord of the Flies” ”
Get custom paper
NEW! smart matching with writer

I’d seen enough to realize that every single one of us could be Nazis” (Golding). The allegory William Golding uses in the Lord Of the Flies reveals the horrible truths of the human society: Everyone has evil inside them everyone is power hungry and desire control and without order, humans will become savage and barbaric.

Golding believes that everyone has evil inside them, even those who are seen as good.

“Maybe there is a beast… maybe it’s only us” (Golding 80). He shows a lot of this belief throughout the Lord of the Flies, specifically with the characters: Ralph, Piggy, and Simon. On page 143, Simon hallucinates himself speaking to the Beast: ‘Fancy thinking the Beast was something you could hunt and kill!… You knew, didn’t you? I’m part of you? Close, close, close! I’m the reason why it’s no go? Why things are what they are?” (Golding 143). Just the thought of the Beast has everyone terrified on the island, but after the conversation with the beast, Simon realizes they themselves are the real beasts.

Another way Golding shows this belief is after Simon is killed. Ralph and Piggy feel guilty about it, but then they begin to blame it on Simon. “It was an accident,’ said Piggy suddenly, ‘that’s what it was. An accident.’ His voice shrilled again. ‘Coming in the dark–he hadn’t no business crawling like that out of the dark. He was batty. He asked for it.’ He gesticulated widely again. ‘It was an accident.” They were meant to be the good people in the book but by saying it was his fault and not theirs, Golding strategically had the boys blame Simon for his own death so that the boys did not have to deal with their guilt. Golding proves his belief that even when one is “good”, the evil comes out of them when it is beneficial (Golding 122).

As well as everyone having evil inside them, Golding also believes humans are power hungry and desire control. Godling lived through both of the World Wars and participated in one, where soon he learned that the main reason for the war was all for power and control. He mainly shows this belief in the conflict between Ralph and Jack. since the first day they had landed on the island, Ralph was considered the one with power because he found the conch and used it as a source of authority. Jack, on the other hand, was jealous of Ralph being chief, and would constantly fight with Ralph about what is needed or what is important. In chapter three, Ralph and Simon were busy building shelter, something that was a need for them, while Jack was out trying to hunt for meat, a want. “The madness came into his eyes again. ‘I thought I might–kill.’ ‘But you didn’t.’ ‘I thought I might.’ Some hidden passion vibrated in Ralph’s voice. ‘But you haven’t yet.’ His invitation might have passed as casual, were it not for the undertone. ‘You wouldn’t care to help with the shelters, I suppose?’ ‘We want meat–‘ ‘And we don’t get it.’ (Golding 39). Since Ralph would not let Jack hunt because he thought it was not a priority at the moment, Jack decided to go on his own because we wanted to control and did not want to follow the rules Ralph put in order. ‘Who thinks Ralph oughtn’t to be chief?’ He looked expectantly at the boys ranged round, who had frozen. Under the palms, there was deadly silence. ‘Hands up,’ said Jack strongly, ‘whoever wants Ralph not to be chief?’ The silence continued, breathless and heavy and full of shame. Slowly the red drained from Jack’s cheeks, then came back with a painful rush. He licked his lips and turned his head at an angle so that his gaze avoided the embarrassment of linking with another’s eye. ‘How many think–‘ His voice trailed off. The hands that held the conch shook. He cleared his throat and spoke loudly. ‘All right then.’…’I’m going off by myself. He can catch his own pigs. Anyone who wants to hunt when I do can come too.’ Jack just wanted to hunt and hunt and did not want anyone to tell him when he can or can not, so he went on his own (Golding 98). Jack tries to have another election so he can be chief but, this conflict causes Jack to leave. Which all leads back to the belief Golding reveals in the book, humans will always be power hungry and desire control.

Lastly, with Jack on his own now this brings in Golding’s last belief, which is without order, humans will become savage and barbaric. “…People who are released from social responsibilities, for example by the fall of their government, revert to their ‘natural state,’ acting out of unadulterated, primal self-interest. They are, as Rumsfeld said, ‘free to… commit crimes and do bad things.’ In other words, human nature is savage and antisocial, waiting to erupt whenever the lights go out and the law is interrupted” When people lack order they go back to their “natural state” or savagery and barbarism. (The Two Human Natures). In the Lord of the Flies, Golding’s shows this belief through Jack and Roger. Since the beginning of the book Roger was Introduced as a quiet and an intense older boy, and eventually becomes a sadistic and brutal terrorist over the course of Lord of the Flies. Midway through the book, Roger’s cruelty begins when he terrorizes the littlun Henry by throwing rocks at him. Jack, since the beginning, was always obsessed with having power, but then soon becomes obsessed with hunting and painting his face like a barbarian. The more savage Jack becomes, the more he is able to control the rest of the group. The boys begin to go through Freud’s psyche levels, the started at the superego level—the values and morals of society which are learned from one’s parents and others—and as the story goes on the boys ended at id level—the primitive and instinctive component of personality. The superego was shown when jack said: “I agree with Ralph. We’ve got to have rules and obey them. After all, we’re not savages. We’re English, and the English are best at everything. So we’ve got to do the right things” Showing he was with the rules and wanted to keep order” (Golding, 58). The id was shown later the night they killed Simon. They chanted: “Kill the Beast! Cut his throat! Spill his blood!” their chant shows clear savagery and they do not have anymore civility left in them (Golding 152). Jack’s want to hunt and separation from the rest of the boys started Golding’s whole belief that without order, humans will become savage and barbaric.

Overall, the allegory revealed in the Lord Of the Flies reveals his three main beliefs of the human society: Everyone has evil inside them everyone is power hungry and desire control and without order, humans will become savage and barbaric. He uses his experiences from the war and put them into his writing to share with the rest of the world what he believes is the true nature of humans and the horrors of it.

William Golding’s Psyche Revealed Through the "Lord of the Flies". (2021, Feb 04). Retrieved from https://studymoose.com/william-golding-s-psyche-revealed-through-the-lord-of-the-flies-essay 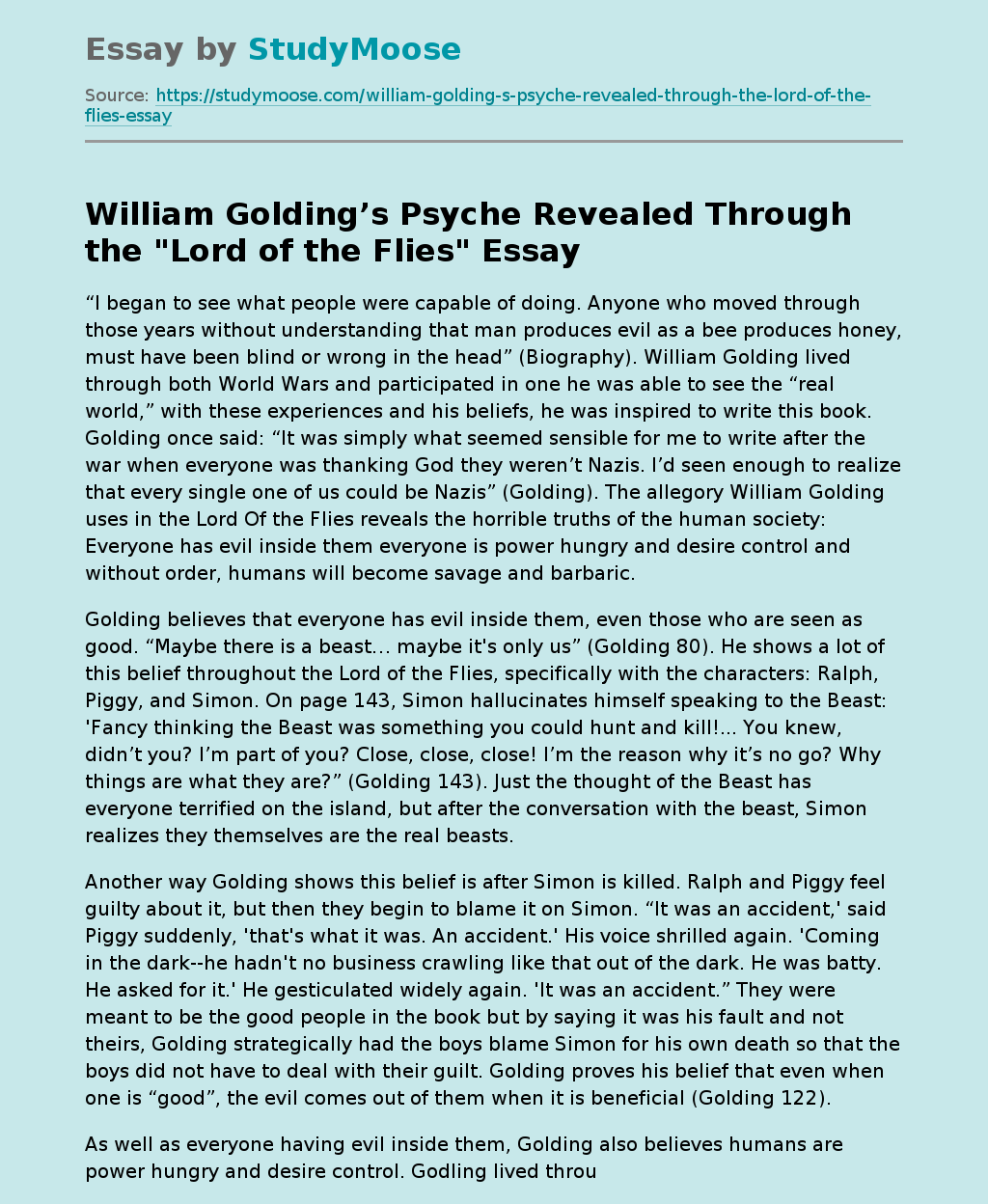