The Walt Disney Company’s organizational structure looks most like a horizontal structure. Horizontal structure is based on departmentalization or subdividing the organization into subunits (Bateman & Snell, 2011). The Disney Company has five business segments: interactive media, studio entertainment, consumer products, parks and resorts, and media networks. These departments are grouped by product which is a great example of the divisional approach. Each product is closely related to the other as they all are about entertainment in one form or another, but they do still have their own descriptions.

The interactive media segment uses digital media to create high-quality interactive entertainment since it was founded in 2008. The studio entertainment segment is a segment on which the company was built. Stage plays, music, and movies are brought to people everywhere through this segment. The consumer products segment brings engaging and innovative product experiences from clothing and toys to fine art and books to the public.

Millions of guests each and every year take the opportunity to spend their vacations and making memories at one of the world’s leading providers of leisure and family travel experiences, at a Walt Disney park or resort.

The media networks segment is made up of various cable, broadcast, publishing, and radio businesses over two divisions. The divisions are ESPN Inc., and the Disney/ABC Television group (“Our businesses: the Walt Disney company”, n.d.). The Disney Company could use a functional approach and group their departments or jobs by the skills needed to perform them. An example would be a marketing division which would take care of marketing company wide.

With the divisional approach, each business function would have their own marketing division. If the functional and divisional forms overlapped they would have a matrix organization. Staff would have two bosses to report to, functional manager and divisional manager. Now they have a dual line of command instead of a single line of command. The upside to a matrix organization is the company would be more flexible and would be able to adapt to change quicker. The downside would be the difficult interpersonal situations and potential confusion that having two bosses could cause.

The human resources function is responsible for finding the best talent to fit in with their corporate culture that defines the people management processes. The company has introduced processes and styles they feel distinguishes them in the marketplace. They know that a good aptitude will not work without the right attitude (“Disney institute”, n.d.). If the human resources department cannot find enough candidates with the best talent to fill critical positions in the company, they could be forced to restructure some of the positions. Instead of using the divisional approach the restructuring could cause Disney to use more of a functional approach in these areas. It would ultimately change their overall approach to a matrix approach.

Many of the examples of organizational design helped determine the Walt Disney Company’s structure. Geography is a factor because all of Disney’s business segments reach all over the world. They have amusement parks in several countries, their movies are translated into many languages worldwide, and the consumer products segment has thousands, if not more, types of merchandise that is shipped everywhere. The media networks, whether cable, publishing, radio, or television are broadcast in almost every country. ESPN is, according to their slogan shown at almost every broadcast, the worldwide leader in sports programming.

Departmentalization is what their structure is based on more than anything else. Creating the five separate business segments makes it easier to manage a company as big as Disney. Even though there are separate divisions, they all work towards Disney’s vision which is simply, “To make people happy.” This vision complements their mission statement which says, The mission of The Walt Disney Company is to be one of the world’s leading producers and providers of entertainment and information. Using our portfolio of brands to differentiate our content, services and consumer products, we seek to develop the most creative, innovative and profitable entertainment experiences and related products in the world. (Tama, 2011).

Disney uses a division of labor to assign different tasks to different people or their groups. The process where the division of labor performs the different tasks is called specialization. When this is done differentiation is created. Differentiation is said to be high when there are many subunits and specialists. At Disney, differentiation is not very high. They have some, but they only have five segments all with stable environments. However, all five cannot perform totally independent of each other. They are all a part of a bigger company that does communicate, coordinate, collaborate, and integrate with each other. Companies with high differentiation need to have a high level of integration to be successful. Disney seems to have the right balance as they are one of the most successful companies in the world.

After all the comparing and analyzing of the organizational structure of the Disney Company, it clearly looks to be a horizontal culture. This company is departmentalized into five business segments. This division of labor has each segment taking care of their own business within the company. However, they all integrate back to each other to make sure the entire business is fully functional and keeping with the company vision of making people happy. 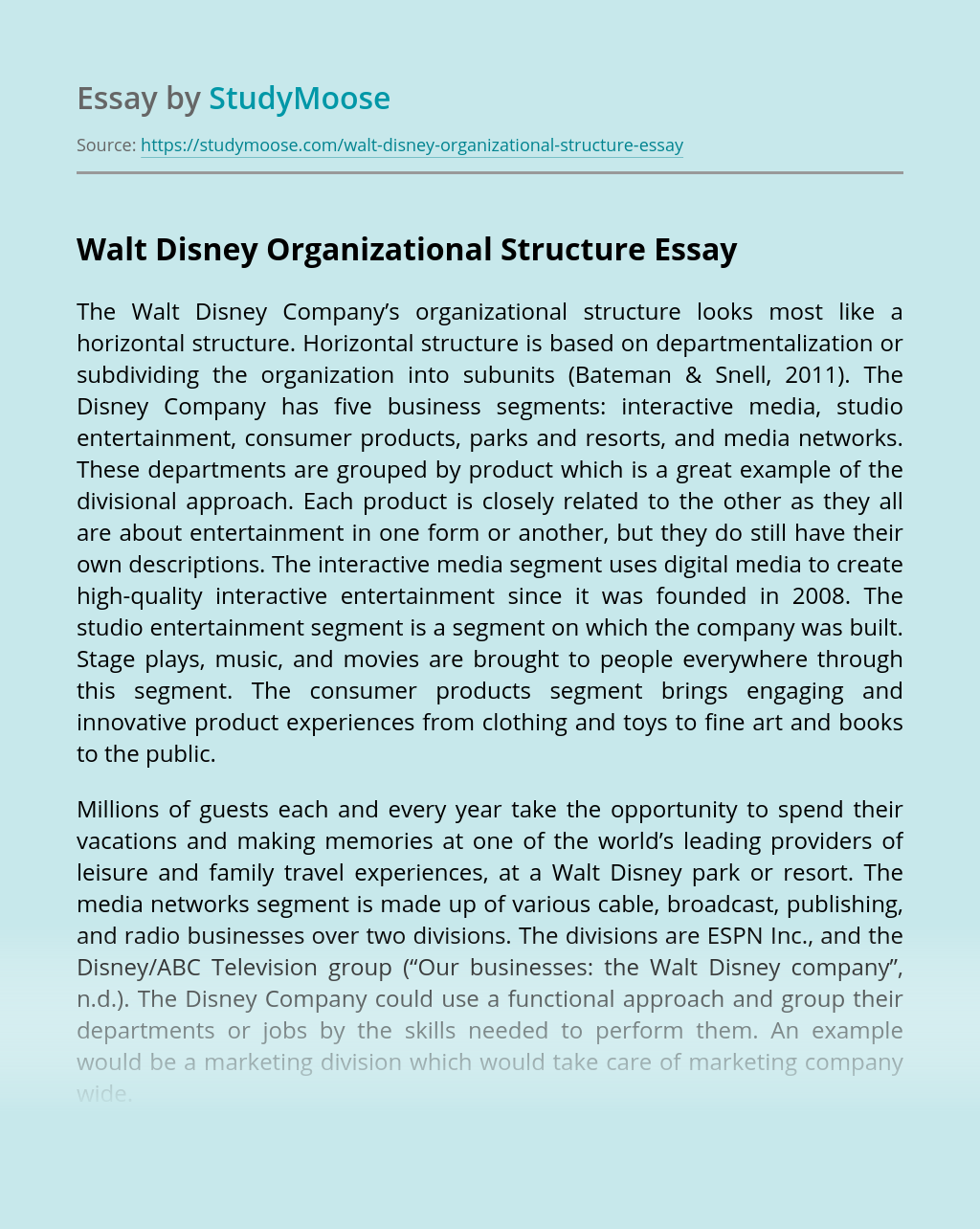