The hip hop subculture is a way of life tethered to and popularized by the widespread practice of rap music. It originates from the African American community. It is expressed through flashy modes of dressing, graffiti art forms, break dancing, and slang. However, with the passage of time, the culture has traversed racial and cultural lines and has become one of the most practiced genres of music throughout the world, with an equally daunting culture to match.

Due to its African American roots, the hip hop culture was, for a long period, a reserve of the black community.

Don't use plagiarized sources. Get your custom essay on
“ The hip-hop subculture ”
Get custom paper
NEW! smart matching with writer

Rap music is largely expressive; its lyrics emotive and sourced from the experiences of its artists. Due to its urban origins, a large number of rap records and graffiti artwork featured the predominant themes of violence, police brutality, and gang affiliation. Some of the lyrics glorified ‘thug life’, which drew more negativity to the subculture. As such, the subculture was viewed by a nugatory eye by members of the white community, an opinion that was fueled by majority of rap lyrics.

However, due to the popularity and commercialization of rap, these artists became very successful and transformed into beacons of hope among the youth. Rap was used as a platform to discuss social issues and preached survival above the worst of adversities as publicized by the pioneers of the genres. It slowly became widely accepted by all and percolated beyond cultural barriers. The subculture slowly became a culture of excess, characterized by expensive clothing, flashy cars, beautiful women, colossal mansions and never-ending parties, dubbed the ‘fast life’.

Most argue that the emphasis on materialism has diluted the subculture’s content, but the practice of sampling and ‘flipping’ continue to embody the original value system of the culture.

The hip hop subculture is an expansive collection of various modes of artistic expressions, beliefs, value system and a way of life for many of its followers. Also written as hip-hop, numerous elements distinguish the culture, the cores of which are rap music, disc jockeying or turntablism, break dancing, and graffiti artwork. The culture has diversified from these cores, giving rise to new forms of expression that in turn have created a strong foundation for hip hop followers worldwide. The adaptation of the different aspects of hip hop by different communities has provided the subculture with a sense of solidity and consistency rivaled by only the greatest of cultures.

The coining of the term ‘hip hop’ is credited to a myriad of the genre’s pioneers. The earliest appearance and use of the term is traced to the year 1978 and the band ‘Grandmaster Flash and the Furious Five’. (Hager, Steven, 18). A band member, Keith Wiggins, used the term to describe the tempo with which soldiers matched, to tease his newly enlisted friend. The band proceeded to use a similar tempo in their performances, and drew jeers from other disco artists with whom they performed. The term ‘hip-hoppers’ was developed as a slur against ‘disco rap’, but was later on to become the root of its identity. The term was further popularized by ‘The Sugarhill Gang’ 1979 release of ‘Rapper’s Delight’ whose lyrics featured the words ‘hip’ and ‘hop’.

DJ Lovebug Starski’s release of ‘the positive life’ in 1981 popularized the term among South Bronx residents. (Hager, Steven, 21). As such, he is widely believed to be the original creator of the term as it relates to the culture. The term’s earliest appearance in print occurred in the detailed history of this culture, dubbed ‘Village Voice’ and authored by Steven Hagger. The book features an in-depth profile of yet another hip-hop pioneer, Afrika Bambaataa, who credits the coinage of the term to Lovebug Starski. (_”Zulu Nation: History of Hip-Hop”._ webcache.googleusercontent.com. Retrieved 2010-04-23)

The movement began in the 1970’s era among the urban settlements Of South Bronx. Due to its subversive nature, the culture remained in the shadows and was only practiced during house parties. Christened the father of hip hop, Clive Campbell aka DJ Kool Herc was among the first of many to provide his apartment as a platform. (Light, Alan, ed. 54).Gradually the music spread throughout his entire neighborhood. The Jamaican-born DJ contributed largely to the genre’s development by incorporating its signature spontaneous toasting, speech and arrogant poetry, prevalent in numerous Jamaican genres. (Light, Alan, ed. 58).The style was named emceeing. It defines the rhythmic delivery of lyrics via spoken word, over music or beats or free of accompaniments.

The rapper Melle Mel, of the ‘Furious Five’, was the first to call himself an ‘MC’ coining and popularizing the term that is in use to date. Cool Herc is credited with the invention of breaking beats, the practice of breaking, isolating and repeating funk songs. The upbeat steady rhythm was meant to keep the crowds of house party enthusiasts dancing all night long. The parties grew in size, and the style became widespread and was adapted by numerous DJs. New modes of breakbeats such as cutting and scratching emerged, and famed DJs Jazzy Jay, and Grand Wizard Theodore started releasing diverse records where they would rap to the beat. A form of dancing, known as breaking, accompanied these performances.

The culture soon became the main form of expression among urban street gangs. They came up with creative variations as a means of competition and usually to debunk a rival gang, instead of taking the usual violent route. Afrika Bambaataa sensed the levels of creativity among the gang members and founded ‘Zulu Nation’, a collection of talented graffiti artists, rap lyricists, and street dance crews. The groups’ popularity and its consequent positive effect on gang activities soon drew the attention of Billboard Magazine, whose article mentioned Afrika and Cool Herc as influential figures. In 1982, Afrika further characterized the culture by creating electro-funk, which fashioned an electric sound out of the upbeat tempo of the genre. (_”Zulu Nation: History of Hip-Hop”._ webcache.googleusercontent.com. Retrieved 2010-04-23). The genre also embraced the use of human body parts to create sounds of music, dubbed human beat-boxing and popularized by Doug E. Fresh and Fat Boy’s Buffy.

Hip hop soon became a platform for the marginalized urban communities to make social statements. Majority of the lyrical content featured the actualities of life in the projects. The youth used hip hop to participate in the civil rights movement whilst highlighting its limitations. The rappers embraced life in the ‘hood’ and the violence, acts of crime, gang affiliations and poverty that came with it. These aspects were hyped, drawing negative connotations from the conservatives. (Light, Alan, ed. 84).Christened ‘Gangsta’ rap, the element grew more lucrative and as such it attracted a larger following. Gangster records such as Ice T’s ‘6th in the morning’, N.W.A’s ‘Niggaz for life’ and Ice Cube’s ‘Amerikkka’s Most Wanted’ broke record sales around the country. The sales were indicative of the fact that hip hop was clearly no longer a conserve of black teens. The plight of the youth from the projects and black civil rights activists was spreading throughout the country. The focus soon shifted from socio-political concerns expressed in the lyrics. It instead focused on the drugs, hostility among gangs and misogyny to appeal to a larger audience. (Light, Alan, ed. 89).

Several cultures have adopted the hip-hop subculture throughout the world. The sound diversifies according to the region that adopts it and is defined and expressed in numerous ways by the people that subsist within it. It has become one of the largest influences over the activities, dress and lingo of the youth worldwide. (McLeod, Kembrew 144). Its sounds have been largely incorporated and fused with several genres of music, therefore, yielding myriads of new styles of music and adding to its already massive fan base. Wherever the hip hop culture takes root, its socio-political and progressive agenda remains intact. Lyrics, dance, and graffiti are commonly used to table issues affecting various communities and to further communal growth and development. Emphasis on the authenticity of rap lyrics has made the subculture localized rather than a foreign import. (McLeod, Kembrew 147).

Although the formally suppressed subculture continues to enjoy universal success, most of its mainstream artists and original supporters argue that the commercialization of the genre has been mostly pervasive and unconstructive. (Ogbar, Jeffrey O. G., 187). The level of income generated by the artists gradually decreased the alignment of the culture by politicians and businessmen. In a bid to attract, a wider audience, the socio-political conscious messages ingrained in the culture were sidelined to glorify the most common of the aspects of the lyrics. Abuse of drugs, misogyny, violence, and gang affiliation, were glorified to attract the white male. (Ogbar, Jeffrey O. G., 188).

The lyrics lost their edge and their quintessence; the message has lost its authenticity and is no longer rooted to a sense of community. The wealth gained by the rappers became the stamp of the genre, its rapidly growing albeit ostentatious industry. (Ogbar, Jeffrey O. G., 188). Affluence and influence have become chief subjects of most record-breaking records. A majority of upcoming artists focus on materialism and a faction of the pioneers have had to redesign their craft in order to remain relevant. Mainstream artists continue to condemn the money-oriented message of the modern hip hop culture with artists such as Nas declaring that ‘Hip hop is dead’.

Misogyny, on the other hand, has completely undermined the efforts of talented female MCs into the industry. Female rappers acquire fewer opportunities than their male colleagues. Missy Elliot, Queen Latifah, and Mc Lyte are the few noteworthy females that have broken this barrier. Lil Kim was the only female whose album has gone platinum, a record that has until only recently been reached by Nicki Minaj. (Light, Alan, ed. 194).

Mainstream female rappers have used the platform to empower the black women and debunk the subservient role that was accorded to them by male artists. The unity developed among these rappers has however declined in the new generation, which has been characterized by feuds and competitiveness. Conversely, the industry has provided female rappers with a wider platform and has accorded them abundant opportunities to thrive.

A select few of modern rappers continue to embody the original elements of the culture. Lupe Fiasco, Kendrick Lamar, Nas, Common, Talib Kweli and KRS-One continue to use rap as a platform for activism, social change, education, and life lessons. (Ogbar, Jeffrey O. G., 194). The movement is known as alternative hip-hop. The lucrative nature of the industry has produced highly successful rappers turned entrepreneurs, such as Jay-Z, Dr. Dre, and Puff Daddy and as such continues to inspire young African American to rise above their circumstances.

In conclusion, hip hop traverses the bounds of the practice of rap music. It continues to spread across all aspects of culture and will continue to do so for a extensive period to come. 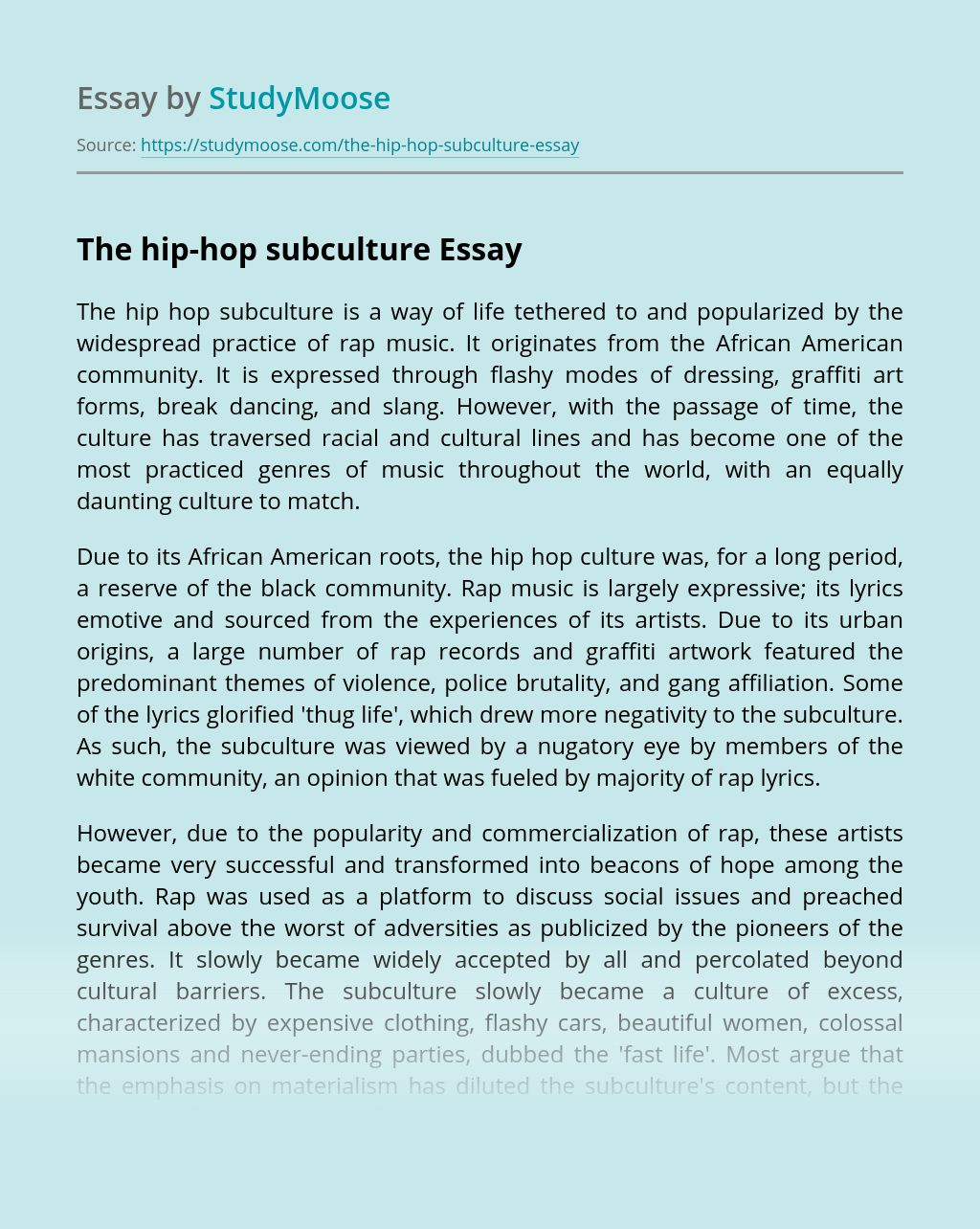