It is safe to say that expressing oneself is exerted differently amongst individuals and forms, and in many cases an art is created. The list of different art forms, artists, art-type etc. extends, and a popular art form on this list includes music. Music is a category in relation to art, but also contains many categories within itself. It is a broad subject that connects from: Country, Pop, Gospel, Opera, Hip-Hop, Rap, Tech, R&B etc. I am an individual who sees the beauty and greatness in all music, but happens to be passionate about two particular genres previously listed.

Don't use plagiarized sources. Get your custom essay on
“ Hip-Hop and R&B ”
Get custom paper
NEW! smart matching with writer

R&B and Hip-Hop are two genres of music that are capable of dissection into small details, separating their differences and similarities. When I listen to and/or observe these two genres, I tend to notice certain contrasts and comparisons. The two music genres, Hip-Hop and R&B, share many similarities and differences especially involving the formatting, lyricism, and tone and/or melodies.

Hip-Hop and R&B songs are both constructed with different instrumentals, but sometimes vary in style. R&B songs tend to portray more of a relaxed, sensual feel, whereas Hip-Hop songs are more for dancing actively. Two of my favorite R&B and Hip-Hop songs at the moment, “Paint This House” and “Senile”, exemplify this. In these songs, like many others, certain keys are used promoting a base sound. Base appears often in Hip-Hip songs, and is usually recognized by its distinct sound in relation to a “boom” noise.

Parties and clubs show how this sound incorporated with music affects people. Along with the crowd, the Hip-Hop songs’ instrumentals, inclusive of a base, makes people want to dance; as also, the case with me. The instrumental also plays a role in the vocalization of a song, leading to an artist’s approach to the song. When I hear certain R&B beats, I automatically think of how I would sing on it and lyrics. The simple formation of the instrumental affects my mindset and mood, leading to sadness, anger, or happiness etc. related lyricism. The occurrence of these emotions in songs could also display its genre.

Various artists belonging to these groups outline their songs based on their genre. The artist’s genre affects the song’s lyricism with the two genres’ different purposes. There have been countless times that I have altered the way I sing or rap a song, because of its genre amplifying or altering my mood. A television show I watched one time, broadcasted an interview with the R&B artist Brandy; an interview in which Brandy exemplified how the instrumental she received, moved her and in a sense, her voice. Most Hip-Hop artists’ songs differ in lyricism from R&B songs, to appeal to different audiences. Some people only enjoy certain types of music, leaving the void filled by artists that make such songs. Certain vocalization could also prove to attract people, like high-pitched vocals on songs.

With the exception of a rapper on an R&B song, singers display more vocal-play on songs. With the melodies singers create, R&B songs differ from Hip-Hop songs; though Hip-Hop artists sometimes create melodies without always singing. Pop and rap songs played on the radio today provide examples of a method of singing, without having to actually sing much; this method is known as Auto-tune, which makes a computerized noise. A singer can also create a Hip-Hop song, though Hip-Hop songs are usually rap-oriented. Different R&B artists have experimented with rap in their music, reciting rap-influenced lyrics with a melody. Various cases even show how singers use Hip-Hop instrumentals at times, but sing personal, self-written, or unrelated lyrics. I have covered songs with friends in which I sang and was at an advantage on certain vocal parts, seeing as how I naturally sing. This ability allows me to alter songs in a different way, including Hip-Hop songs.

​Music is one factor possessing the ability of creation through countless amount of ways. A slight noise could trigger my instinct to create a melodic beat from it, and sing random lyrics. This effect is not only the case with me, but many musical geniuses existing today or previously. Music serves as a stress-reliever, escape etc. so it ultimately affects the production of a song. It is these changes in the formation, that leads to noticeable similarities and differences of a song. The music genres, Hip-Hop and R&B, play a major role in society differentiating whilst also relating; this, in terms of different factors shaping the production of a song. To make a song, many aspects could be assessed connecting from choice of words, beat etc. These particular aspects are the main ones I pay attention to when listening to music, providing a platform in which to compare and/or contrast in many ways. 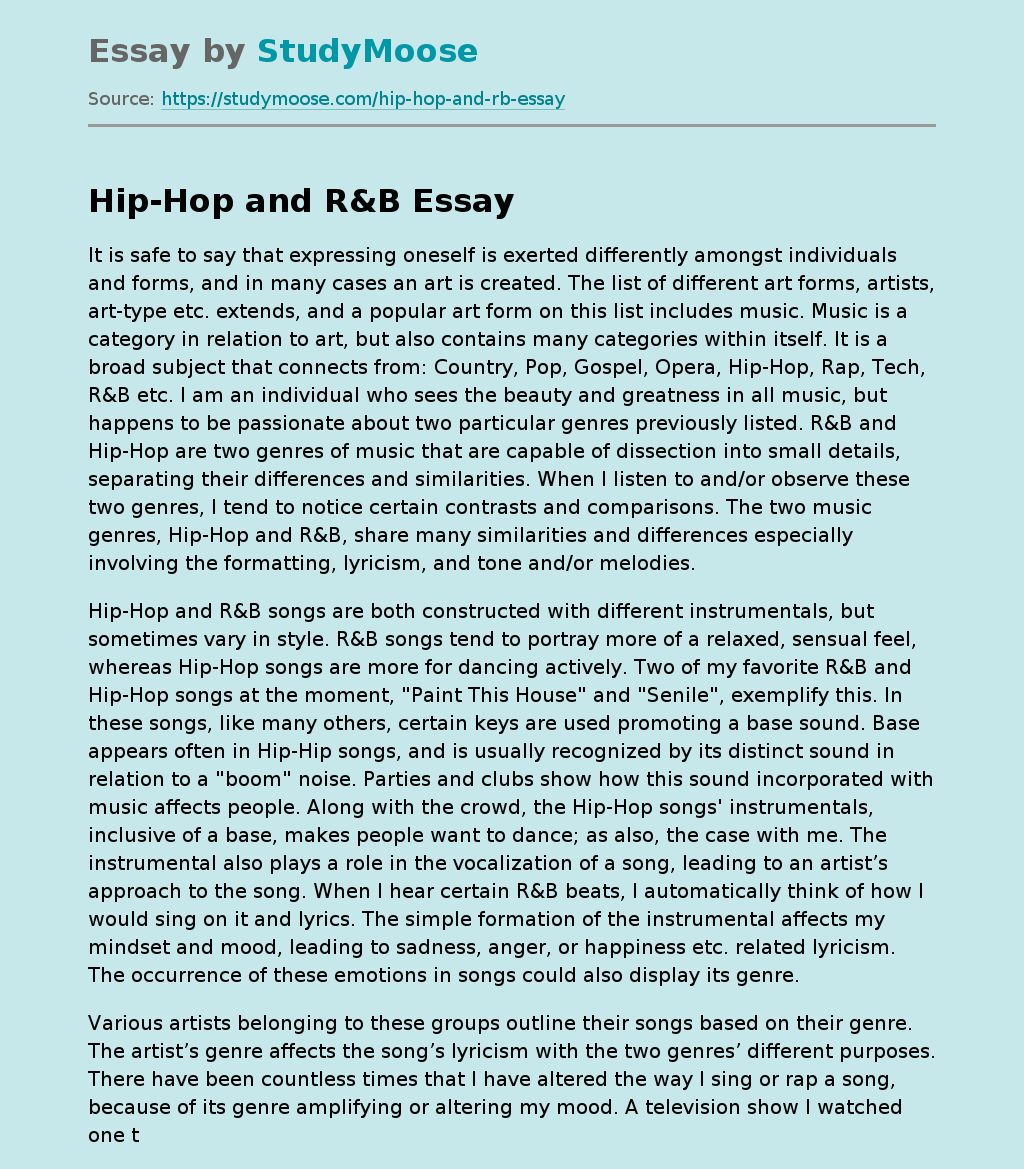