The Positives and Negatives of Hip-Hop

In Geoffrey Bennett’s essay titled, “Hip-Hop: A Roadblock or Pathway to Black Empowerment,” he speaks about the positive and negative effects that hip-hop has on the Black Community. Bennett goes all the way to the beginning of hip-hop, which he says took place in the early 1980s with rappers such as Run DMC, Public Enemy, Sugar Hill Gang and many others. The author then speaks about how hip-hop grew not only in the young black African American culture but also in the white youth culture as well.

Don't use plagiarized sources. Get your custom essay on
“ The Positives and Negatives of Hip-Hop ”
Get custom paper
NEW! smart matching with writer

Finally, Bennett states that hip-hop has the power to influence positive and negative effects on African Americans and the larger cultural in general. I believe that the hip-hop culture has contributed positively to the African American cultural but it can also be degrading and explicit to the Black community. Hip-hop is a culture and form of ground music that is self-expressed. It originated in the African American communities in the 1970s. Hip-hop is a musical genre rhythmic and rhyming speech that is chanted.

It is not only expressed verbally but also by DJing/scratching, break dancing, graffiti writing and beat boxing. Hip-hop is the way people talk, the way people act, their fashion and their culture. It is the culture of the streets. Throughout the years, hip-hop has changed dramatically from the artist to the lyrics. There once was a time where “old school” rappers such as Run DMC, Heavy D, LL Cool J, Public Enemy and many others would rap about promoting political awareness about topics from racial inequality, gender inequality, police abuse, voting, education, family and more.

The golden age of hip-hop is very different from the hip-hop that is popular now. Artists like T. I. , Young Jeezy, 50 Cent, and Soulja Boy are some of the front-runners in hip-hop. Most of their songs are about guns, money, drugs, or disrespecting women. There is not any kind of emotional aspect or any actual point to the songs. They are just simplistic lyrics on simplistic beats. They do not produce songs like the golden age artists did because that style has fallen out of the spotlight and now hip-hop artists rely on money, jewelry, and thug habits to make them famous.

Older rappers were rapping so that they could be able to influence others with their lyrics but now days most rappers are rapping for the fame. A perfect example of hip-hop being positive and negative would be a former rapper by the name of Tupac Shakur also known as “2pac”. He began his career in the early 1990s but it was not until 1993 that he finally got his big break with his music career. Tupac’s music and philosophy is rooted in many American, African- American, and World entries, including the Black Panther Party, Black Nationalism, and liberty.

His debut album, “2Pacalypse Now”, revealed the socially conscious side of Tupac. On this album, he attacked social injustice, poverty, respecting women and police brutality in motivational songs such as, “Keep your head up”, “Brenda’s Got a Baby”, “Trapped” and “Part Time Mutha” and he wrote poems as well. Later in his career around 1996 he wrote a song dissing former rapper by the name of Notorious B. I. G called “Hit Em Up”. In the song, Tupac claimed to have had sexual intercourse with Faith Evans, Notorious B. I. G wife at the time.

On September 13, 1996, Tupac was shot and killed by one of the deceased rapper Notorious B. I. G associates. On the positive side, I believe that hip-hop artist and their lyrics have a big effect on young kids and teenagers all around the world. Many rappers write songs that thousands of people can relate to in their day-to-day life. To some people it could make their day or even motivate them by knowing there is someone out there that understands what they are going through. On the negative side, there are people who look up to rappers that promote the violence, the cursing, the drug dealing and killing.

One of the biggest problems with rappers now days is the way that they go around parading about selling drugs like it is the only way to make money and provide for their self or families. Because of that, there are more young males selling drugs and being arrested over a lifestyle that they did not have to choose but because of lyrics in a song by a rapper that probably never sold drugs before in their life. The genre of hip-hop music can be both positive and negative. It is up to individuals to determine what they want to take from the lyrics, and choose if they want to apply it to their day-to-day lives.

Many songs in hip-hop talk about violence, disrespecting women, materialism, and drug dealing. However, these things existed way before hip-hop was popular, and they will continue regardless of hip-hop’s existence. Hip-hop can be positive and negative to each individual differently depending on the person it does not matter if they are Black, White, Hispanic or Asian. It is a culture, it is a state of mind, it is a language, its fashion, it is a style, and it is something you feel. Hip-hop is deep; it has a meaning for each person. You do not just listen to hip hop music, you feel it, and you respect it, understand it and share it.

The Positives and Negatives of Hip-Hop. (2016, Dec 21). Retrieved from https://studymoose.com/the-positives-and-negatives-of-hip-hop-essay 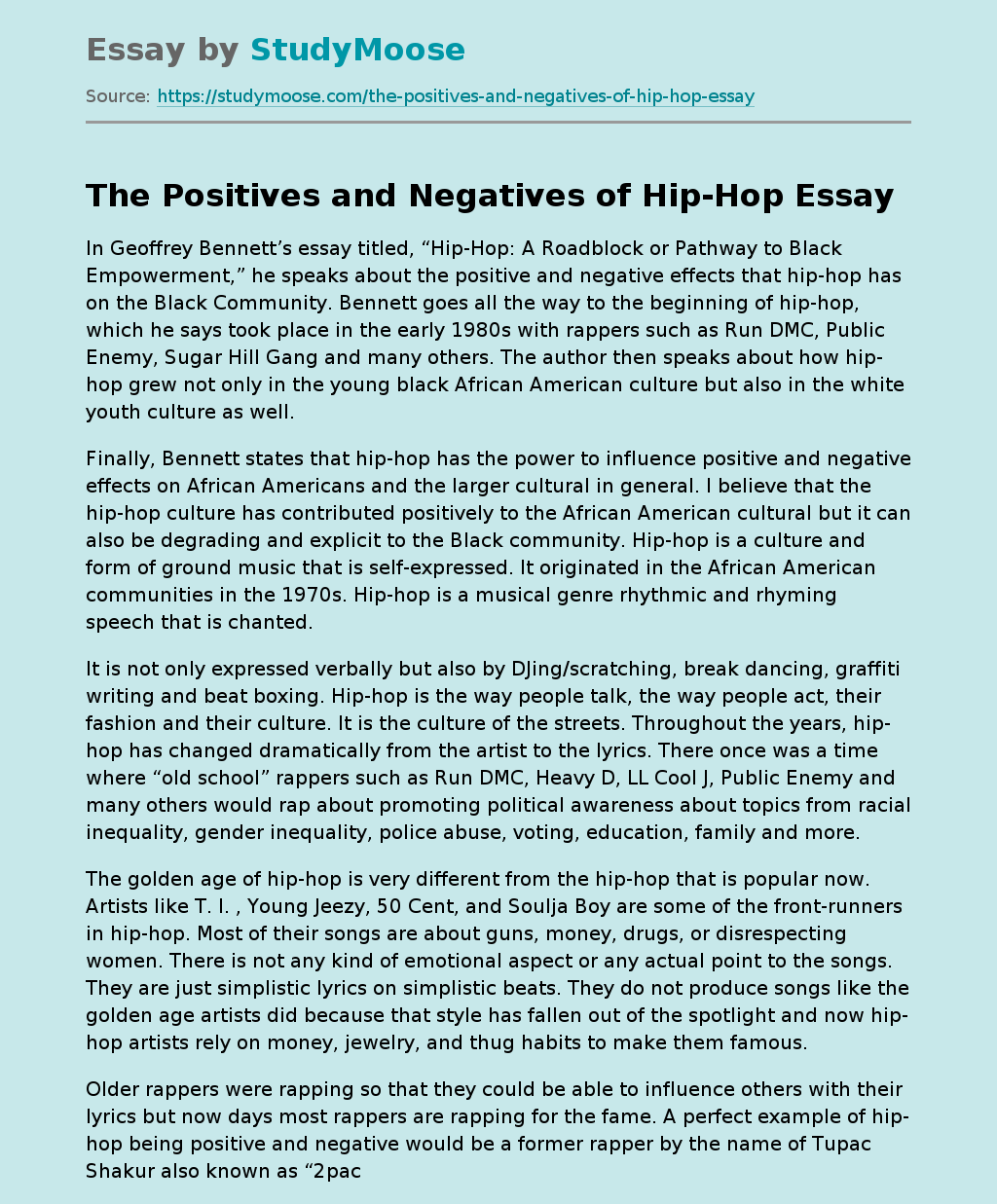