In Hip-Hop’s Betrayal of Black Women published in Z Communications online magazine July 1, 2006, Jennifer Mclune responds to Kevin Powell’s Notes of a Hip Hop Head by vividly expressing to feminist and African American women that “Hip Hop owes its success to the ideology of woman hating. It creates, perpetuates, and reaps the rewards of objectification.” In Powell’s quote he begins to defend male artists by blaming their behavior on socioeconomic conditions, and by comparing their lyrics to that of how black men were looked at during the 1960’s.

Don't use plagiarized sources. Get your custom essay on
“ Hip-Hop’s Betrayal of Black Women ”
Get custom paper
NEW! smart matching with writer

Mclune feels as though Powell is merely using his “socio-economic explanation for the sexism in hip hop” (Mclune 1) as a way to silence feminist critiques of the culture. Mclune feels as though Powell is turning a blind eye to the fact that women are also raised in poor and violent environments as well as men. Women “…have yet to produce the same negative and hateful representation of black men that male rappers are capable of making against against women” states Mclune (Mclune 1).

“Yet we all know that wealthy white boys can create the same hateful and violent music as poor black boys” Mclune argues (Mclune 1). As long as both races share the same common enemy people will look past the slander of women.

Mclune argues that the women should not be diminished in response to the war that has been declared, so she now feels it is time to fight back. Mclune makes sure the readers know that “those who do have to fight to be heard above the dominant chorus of misogyny” (Mclune 2). Talid Kweli amongst other artists was one of the few called out in the article for his uplifting music that does not slain women. Known for songs such as “Black girl Pain” a song that is an attempt to praise black women and recognize their struggle. Though he does not disrespect the African American woman his passiveness towards other music that down plays them is in the equivalence to that of a contradiction. Mclune goes on to say “they remain passive in the face of unrelenting woman hating bravado from mainstream artist.” (Mclune 2)

Though just when this feud begins it only gets deeper when she shines a light on the dark area of the women in hip hop. This is not a feud of just black and white men in hip hop versus the black woman. It is a feud also between the women in hip hop against the African American woman. Hip hop artist Eve appears in music video Pigeons and while being a woman in hip hop ever “displays her unity not with the women… branded pigeons but with the men who label them. (Mclune 3)” Mclune goes back to Powell’s original quote to strengthen her argument. She implies that if people are to continue to live by Powell’s thesis that African American women will remain victims of hip hop. Mclune continues on by comparing this day in age’s women hating to the “attacks on black female writers who went public about the patriarchy in our community” says Mclune (Mclune 4). While the women who tried to take a stand were called traitors and looked down upon the women bashing and women hating rappers were glorified. As Jennifer Mclune brings the article to a close she goes on to say ”…were any females at the table when the deal went down. Did we agree to be dehumanized.”(Mclune 4) Mclune feels as if the war has already been lost because “Sexism is the winning ticket to mainstream” (Mclune 4) she continues “If these are the wining terms for our creativity black women are ultimately the losers” (Mclune 5).

Hip-Hop’s Betrayal of Black Women. (2016, May 12). Retrieved from https://studymoose.com/hip-hops-betrayal-of-black-women-essay 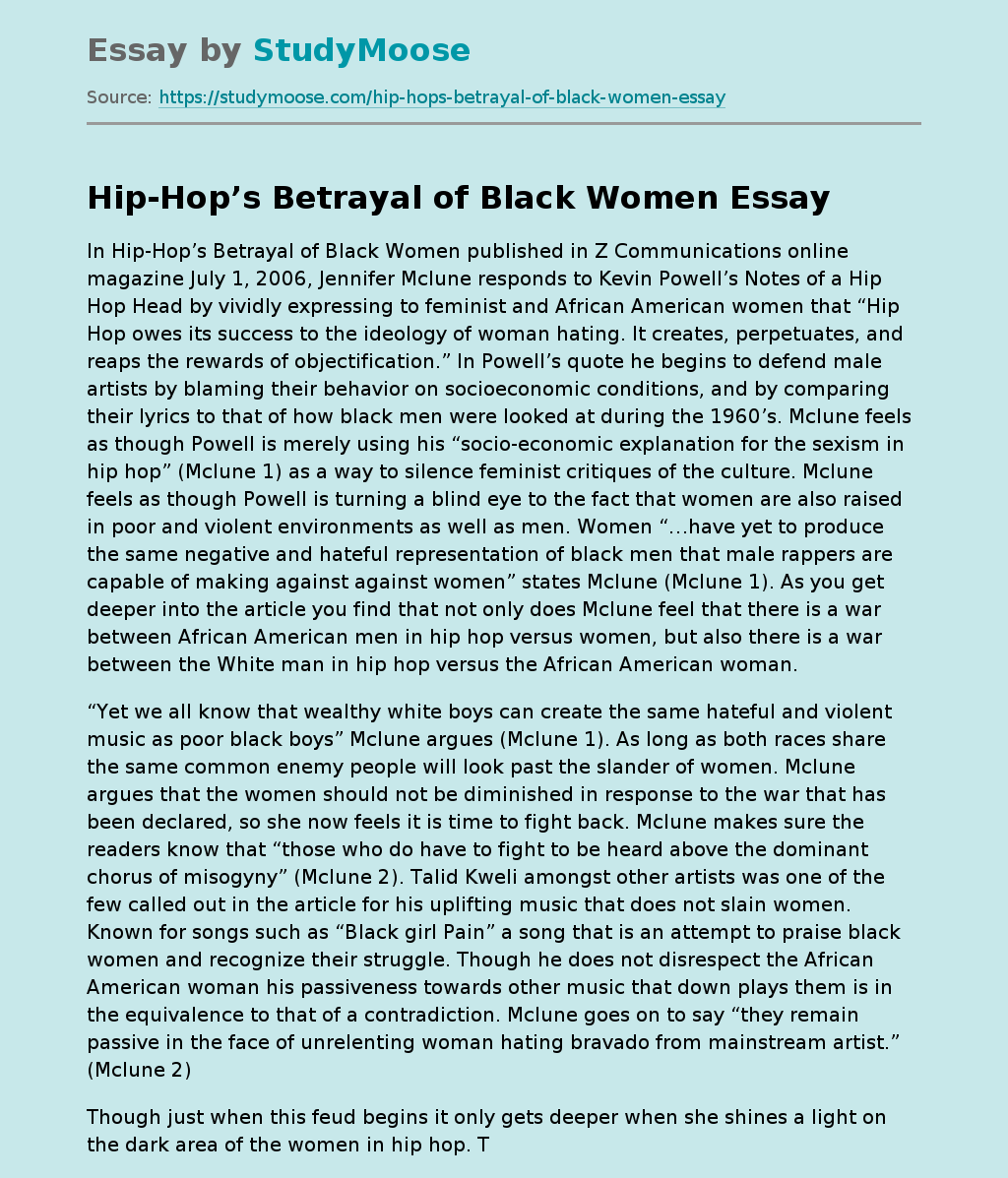