Why has Walt Disney been so successful for so long?
Disney’s long term success lies mainly in the quality and type of product it creates and the firm’s successful and tactful management of its creative content and resource s. At its core Disney, unlike many other content providers has the ability to reuse and remake previous content. A demonstration of this ability is the current re-release of a 3D version of The Lion King that is current in theater.

Don't use plagiarized sources. Get your custom essay on
“ The Walt Disney Company Case ”
Get custom paper
NEW! smart matching with writer

This ability to reuse content is achieved because Disney can market its children’s movies to each new generation of children and to their parents, with whom many of their productions once resonated with. Disney has exploited this aspect of their business by returning movies to the “Disney Vault” and only having a set number of movies available for purchase at any given time. Furthermore, Disney is a multifaceted business that has developed content to appeal to a wide range of ages.

Such that once one moves beyond The Lion King they can engage in content created for an older and more contemporary audience, like Touchstones’ films. And when these consumers finally become parents they are once again touched by the Disney magic through their children. Disney’s other businesses such as ABC, and ESPN, allow them to hone in on specific consumer groups and their parks provide and experience that the whole family can enjoy. Overall Disney’s success is a result of their ability to engage new audiences and cycle their audience through various aspects of their content.

What did Michael Eisner do to Rejuvenate Disney? (Specifically how did he increase net income in the first four years?) When Eisner joined Disney in 1984 he committed himself to maximizing shareholder wealth through annual revenue growth of 20%. At the core of his plan to rejuvenate the firm and achieve these revenue margins, Eisner and his team focused on revitalizing Disney’s TV and Movie Business. In 1986 they started by bring back network program with the launch of The Disney Sunday Movie on ABC.

The show served as a demonstration of Disney’s commitment to quality programming, and innovation. Essentially it put Disney back on the map and in front of viewers. This was followed by the release of several hit sitcoms and non-network shows. In terms of Disney’s movie division Eisner upped the company’s production of new films and improved the content of films to suit a more contemporary audience.

The success of Eisner’s new approach and tactics is demonstrated by Disney increasing its market share 19% in 1988 from 4% in 1984. Furthermore, by 1988, 82% of Disney’s movies were profitable, while about 60% of all movies lost money.

Has Disney diversified too far in recent years?
Change is a necessary element if a company seeks to sustain growth as years go by. In recent years Disney has explored numerous new avenues, to reach out to previously untapped consumer populations and further exploit existing ones. However, not all of Disney’s ventures

have been successful from the get go or remained successful in the long run. Therefore, I believe that it is not quite accurate to say that Disney has diversified too much in recent years, but that it has been too slow to abandon previously successful opportunities. Specifically, distribution methods and some merchandising / consumer products, that have since lost popularity given new technologies and consumer tastes.

.
Where did the Management of Creativity change under Eisner?
Prior to Eisner’s arrival at Disney in 1984, the term management of creativity had yet to be coined as a term that described Walt and Roy Disney’s management of creativity within the company. Up until his death, Walt Disney can be credited as the driving source for creativity at Disney. Although he may not have derived every new idea, he was often the main force refining and perfecting it.

Under Walt, the nonhierarchical and flat nature of the company allowed the free flow of new ideas and projects. While his emphasis on teamwork, communication and cooperation is what polished and pushed good ideas into creation and allowed for the reformation of ideas that needed more development in order to meet Walt’s standards. Upon his arrival in 1984 it was clear that Eisner viewed “managing creativity” as Disney’s most unique and defining corporate skill.

He committed himself to preserving the culture of free flowing ideas that Walt had created and fill Walt’s void as a driving source for creativity and quality. To this end he immersed himself in the many phases of the creative and production process, and often created tension between the creative and financial sectors so that through this constant push and pull they would force each to the limits of creativity and efficiency. Despite each sectors high expectation for growth and cost containment, it was always clear that spending was available if necessary to achieve and improve upon new and creative ideas.

How would you asses the job Bob Iger is doing?
Robert A. Iger became President and CEO of The Walt Disney Company in October, 2005. His strategic vision for The Walt Disney Company has been to focus on creative content possible, innovation, utilizing the latest technology and expanding into new global markets. With the acquisition of Pixar (2006) and Marvel (2009), two of the entertainment industry’s greatest storytellers, Iger has built on Disney’s rich history of unforgettable storytelling. In the most recent fiscal year, Disney recorded 5% growth in revenues and a 24% increase in shareholder return.

Mr. Iger has also expanded and coordinated Disney’s presence outside of the United States, therefore, establishing the blueprint for Disney’s international growth today. Disney has since become the largest media company in the world. In light of a bad global economy, it seems that under Iger’s watch the company has maintained stable growth and his vision for the firm seems reasonable given the companies track record, strengths and weaknesses. 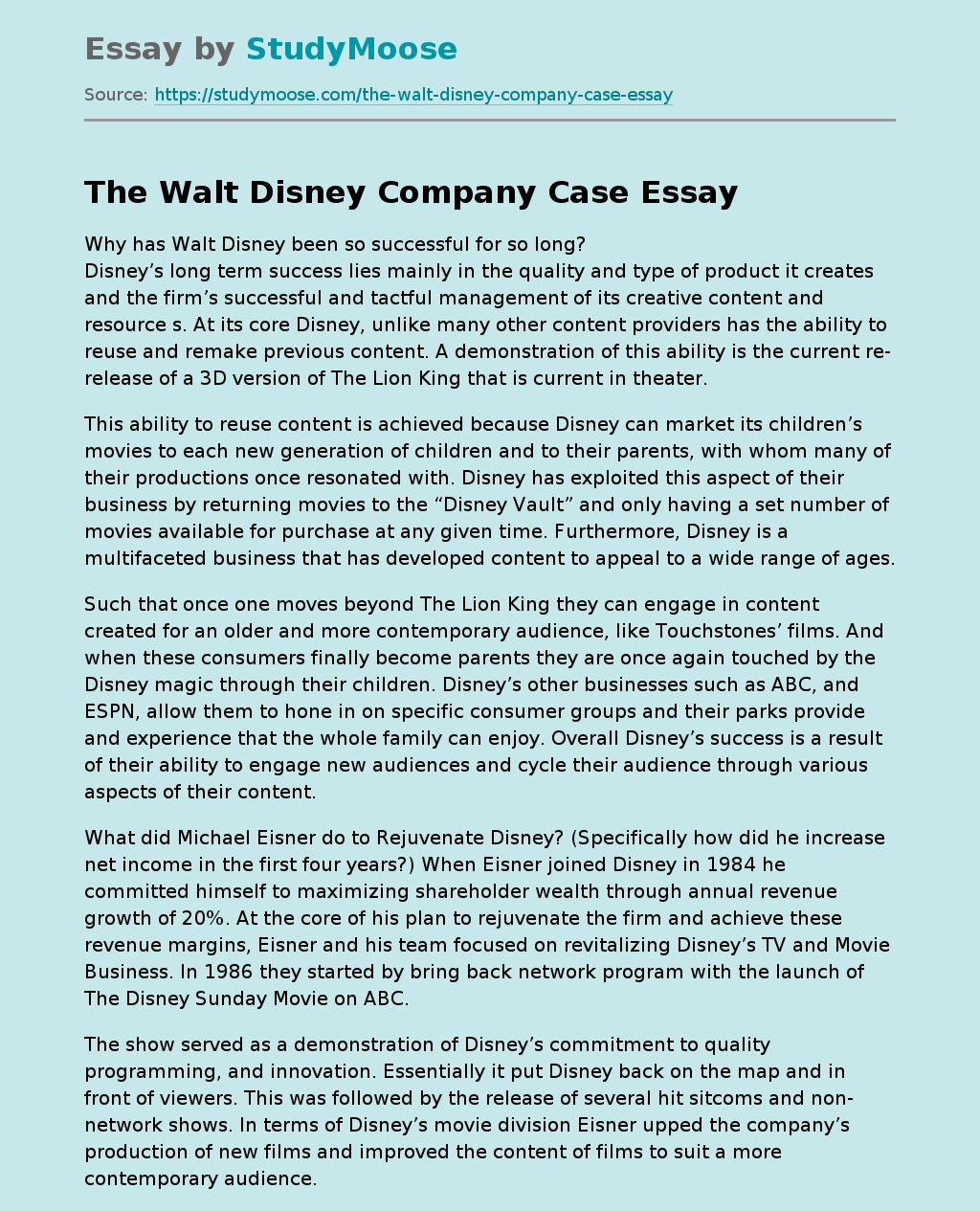