Some American historians devote their research to topics related to robber barons vs. captains of industry. That’s right, back in the 1850s, the New York Times dubbed new American businessmen. The metaphor implied medieval knights, who charged for passage past their castles on the banks of the Rhine. A nickname was still there, fixing for mill-owners and financiers, who in the XIX century created huge industrial and transport empires.

They were named burglars because at one time they managed to monopolize entire industries through the formation of trusts.

Don't use plagiarized sources.
Get Your Custom Essay on Leland Stanford – Robber Barron or Captain of Industry Just from $13,9/Page

The union was accused of lack of business ethics and ruthless exploitation of wage earners for the sake of increasing their own profits. There were persistent rumors that these capitalist pioneers were at the roots of organized crime in 1920-1933, establishing colossal financial companies through intimidation, violence, corruption, conspiracy, and fraud.

But a lot of modern capitalists see them as the industrial genii because own activities have led to an unknown growth of the US economy, material prosperity of the nation.

Among the sectors helped to collect big fortune were oil, steel, alcohol, cotton, textile, and tobacco, as well as railways and banks.

In those days society comprehends a new American aristocracy had arisen, whose authority and public status was due not to a noble lineage but financial wealth. When in the 1880s it was about captains of industry or even robber barons, Leland Stanford was one of the priority names that came to mind.

He was born in 1824 in a large family. A boy finished a comprehensive school, and after, up to 15 years, he studied at home. In 1841 the youth entered the Clinton Liberal Institute, where learned jurisprudence. In 1848, Leland was enrolled in the Bar Association. After relocation to Port Washington, he started own practice as a lawyer. But life’s vicissitudes forced him to change a workplace.

Stanford mastered all rules of wholesale trading, settling in a shop for miners. He served as a justice of the peace and helped form a library community in Sacramento. In 1856, Leland with his wife moved to San Francisco for participating in major trade transactions. He has quite succeeded as an entrepreneur.

Leland joined the four largest businessmen in Sacramento, who were dominant investors for the Central Pacific Railroad (CPRR), founded June 28, 1861. Stanford was elected as president of the association. Charles Crocker, Mark Hopkins and Collin P. Huntington who were his colleagues also had a reputation as robber barons. In the same year, Leland for the second time put forward his candidacy for the post of stadholder in California and won. By the way, one of the locomotives on the railway was named in his honor.

Leland was the first Republican governor. Being a big, slow-talking person who always read a pre-prepared text, he astounded audience with own sincerity and unexpected improvisations. During his tenure, Stanford reduced the national debt by half and advocated the preservation of forests. He also led the creation of pedagogical college in California, which later became the State University of San Jose. After the Governorship of Stanford, the term of office changed from two years to four, in accordance with the law passed.

A significant part of Stanford’s legislative efforts was related to bills that would provide laborers’ unions with the required legitimate structure and sources of credit for prosperity. In addition, Leland did not see any restrictions on women in business. He stressed that difficulties they face in the workplace are not due to their own limitations, but to the fact that employers do not take into account their needs.

The main difference of new financial cohort was a desire to control the economy of the entire state. But a huge expansion of influence could not be achieved without the assistance of political circles. There was a gradual enlargement of economic representatives in power. The phrase “politics is business” becomes the formula of the end of the XIX century.

In May 1868, Stanford, along with his companions, formed the next brainchild. It was the Pacific Union Express Company. Being the head of the firm that built the western part of the first transcontinental railroad in the Serra-Nevada Mountains, Leland spearheaded the Central Pacific and Union Pacific unification ceremony in 1869.

Stanford showed himself not only a successful but also a tireless manufacturer. Perhaps, this is the secret of his success – to foresee future prospects and invest assets. While the CPRR was under construction, Leland and his partners acquired supervision over the Southern Pacific Railroad. Stanford served as president from 1869 to 1890. And in 1874 he became chairman of the Steamship of the East and West, which carried out voyages to Japan and China.

The sphere of Leland’s interests, except transport hubs, extended to other areas. So, Stanford owned two wineries and a vineyard with an area of ​​about 14 square meters. His property included the “Griddly Trail” and a farm in Palo Alto, where the famous breeds of horses were removed.

Leland Stanford, along with his wife Jane, founded Leland Stanford Junior University as a monument to their only child who died as a teenager on a trip to Europe. About $ 20 million was sent to the opening of the mentioned educational institution. The state of the Stanford family in the late nineteenth century was estimated at about $ 50 million.

A lot of the so-called robber barons like James J. Hill, Henry Ford, Andrew Carnegie, Cornelius Vanderbilt and John D. Rockefeller have become wealthy entrepreneurs through product innovation and business efficiency. The supply grew out of the provided goods and services, prices fell rapidly, which greatly increased the standard of living of Americans. Agree, this is the opposite of monopolistic behavior.

Others, including Robert Fulton, Edward C. Collins and Leland Stanford, earned their fortune through political entrepreneurship. Some rich railroad tycoons during the 1800s received privileged access and funding from the government through the extensive use of lobbyists. They received monopolistic special licenses, one-mile subsidies, huge land grants and low-interest loans.

Thus, captains of industry or robber barons transformed capitalism into its managerial variety, in which they could sooner achieve leadership in their field and create a monopoly for maintaining control. In all corners of the country, branches of companies governed by professional managers were formed. I.e. despite the possession of huge capital, a lot of oligarchs of the 19th century, especially Leland Stanford, sent it into the mainstream of philanthropy, investing in the future of America.

(2) Folsom, Burton W., The Myth of the Robber Barons

You may also be interested in the following: robber barons or captains of industry essay 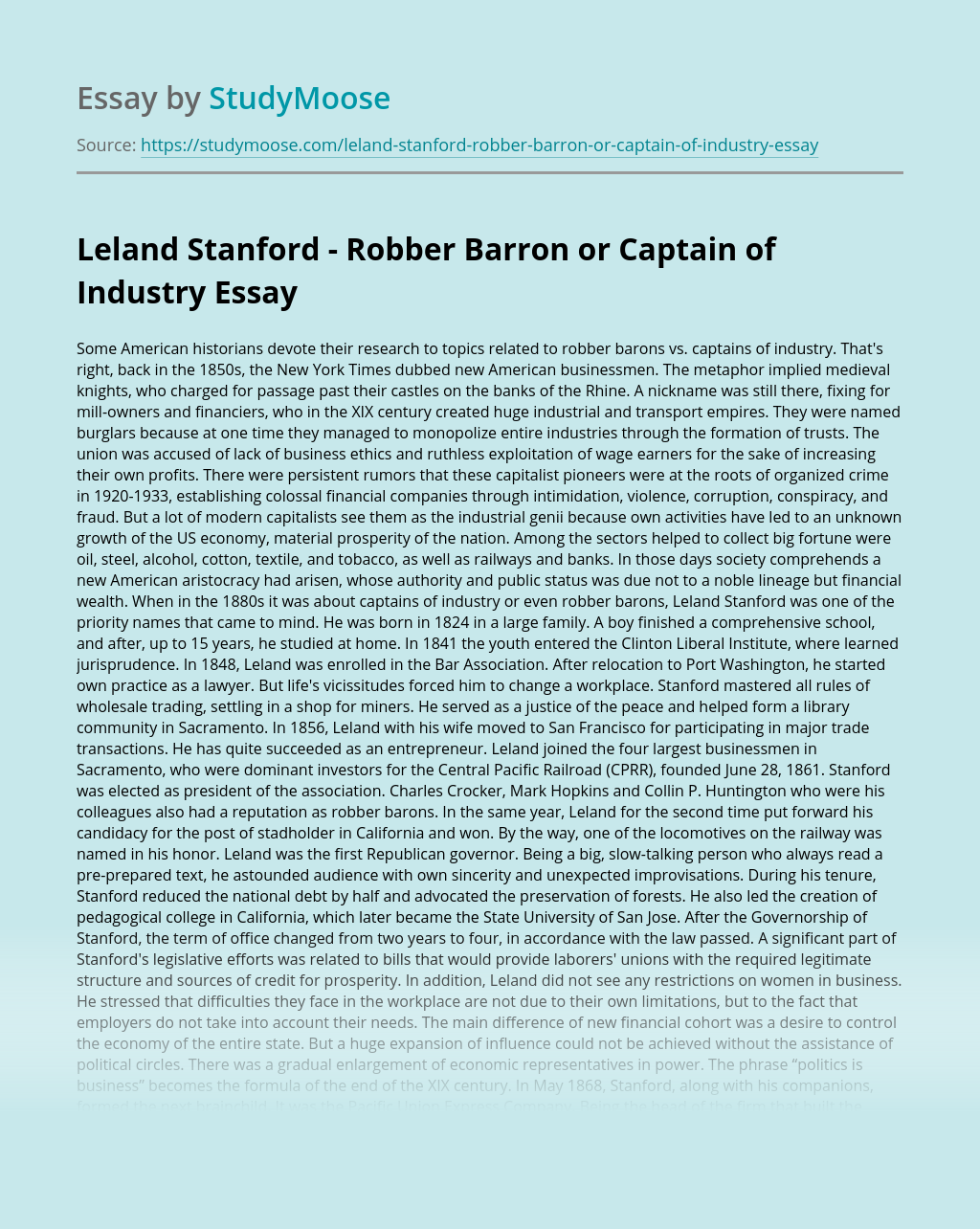 The Role of Fame, Fate, and Destiny in Beowulf

Beowulf dedicated his last breath to save his people from the ravages of a deadly monster.  Despite the frailties of old age, he hastened once more to save the day.  Unfortunately, the terrible earth dragon was too much for him.  Beowulf succumbed to his wounds and died.  The last lines of this great Anglo Saxon... VIEW ESSAY

Do you think Evo’s decision not to set up any physical operation overseas is a good one? Why or why not? I have a mixed opinion on this question. I feel that there is a lot of potential missed business by not going international. The cost of setting up a business internationally is highly expensive,... VIEW ESSAY

When we speak about unions for example the United Auto Workers, the Teamsters and the Steelworkers I was surprised to learn this week that public employee unions don’t have the same rights. One key difference that makes public different than private unions is that fact that in individual states public sector unions are not covered... VIEW ESSAY