Dred Scott was an African American man born into slavery around 1800. He wanted what all enslaved people wanted. He wanted his freedom. Dred Scott vs. Stanford was a landmark Supreme court case that was a major player in the secession of the southern states. The bravery, courage and determination of Dred Scott was one of the the first steps in a long road to freedom.

Around 1820, during the time of the Missouri compromise, Dred Scott’s owner Peter Blow took him to the newly formed slave state of Missouri.

Don't use plagiarized sources. Get your custom essay on
“ The Dred Scott Decision ”
Get custom paper
NEW! smart matching with writer

He was then sold to John Emerson, and was taken to Illinois. Which came into the Union in 1819 as a free state. Dred Scott was a slave in the free state for a short time, but then he was moved again to the Wisconsin Territory.

According to the Missouri compromise, that territory also fell under the free land. In 1837 Emerson went back to Louisiana and left Dred Scott in the Wisconsin Territory. Emerson’s wife Eliza leased out Dred Scott in Wisconsin, then later brought him back to Louisiana and then eventually to Missouri. Soon after, Dred Scott sued for his freedom in the Missouri State court case of Scott vs. Emerson. The court ruled that he would still have to be a slave because he was in a slave state. Eventually, He took his case to the supreme court. At this time his new owner was John Sandford, Eliza’s brother. Thus, the Supreme Court case had began.

Roger Taney was the Chief Justice at the time.

Scott was only able to take his case to the Supreme Court because in article 3 section 2 of the Constitution it says that if you are suing a citizen of another state, it can become a federal case. There were some issues with the case because there had never been one like it in the supreme court before. People wondered if congress had the power to regulate slavery in the new and unorganized territories. There were no previous rules about if a slave became free for being in a free state or not.

The president at the time was James Buchannan. He was elected in November of 1856 and took office in March of 1857. He was very concerned about this court case because he did not want it to cause more aggression between the north and the south. Justice Robert Cooper Grier and James Buchannan talked regularly about the case. Buchannan wanted to make sure that a northerner such as Grier sided with the majority of the court so it would not seem like another sectional decision. He didn’t want to deal with the slavery issue anymore because he knew it was ripping the nation apart. He wanted the supreme court to close the doors on this case, and he thought that would make it ok.

The Dred Scott case eventually led to the Panic of 1857, and even attributed to other well known fights such as Bleeding Kansas. By the end of Bleeding Kansas in 1856 there were 200 dead and 2 million dollars worth of property damage. All of this was taking place during this court case. Sectionalism was tearing the nation apart, and the Dred Scott case just made everything worse. It played a major role on how the United States would continue to view African Americas. According to his case, it would be as slaves and property only. Without the efforts of Dred Scott and all of the people who followed him freedom could have taken much longer. He was one of the first in the long years, and fights for freedom. He inspired people such as Rosa Parks, MLK and even Malcolm X. These people had a huge impact on the world, and gaining equality for all people. The decision was 7-2. They stated that Dred Scott was not a citizen, because the “Negros” have no rights to citizenship or the legitimacy to bring this to trial.

Taney goes on to say that Congress’s ability to regulate slaves in the territories with the Missouri Compromise and the Northwest Ordinance of 1787 is unconstitutional. This was only the second time in history that a congressional act was overturned by the Supreme Court. They said that because Dred Scott did not have the rights to sue because he was not a citizen he was still a slave and they were not going to do anything to change it. They said that slaves were property and nothing could change that. After the decision, the north started to refuse to enforce the fugitive slave law. The free states started to go around the national government and pass their own freedom laws. The republicans at the time claimed that the decision was not binding, but at the same time the southerners tried to push the north to accept the decision or they would leave the union.

This case really upset many abolitionists, and helped lead to the civil war. It lead to many things, such as the John Brown Raids. It was very empowering for the southerners because it gave them hope that slavery could continue to be everywhere, and expand out west. No matter where a slave resided, they were not considered to have true freedom. This left little opportunity for slaves and northerners. Soon Lincoln took office, and he had a very strong opinion that slavery should be illegal. All of these things combined lead to the secession of the slave states.

After this Supreme Court case, in the year 1857 his former owner’s sons bought his freedom. The Blow brothers were childhood friends of Scott’s and they helped pay Scott’s legal fees through the years, and they even set him free after the Supreme court ruled that he was still a slave. Without the Blow Brothers, I doubt that this case would have made it as far as it did. It just goes to show that even in a time when slavery was alive and prospers, there were still some people who wanted it gone in the south too.

I don’t agree with how this court case went, and frankly I find it appalling. Slavery in general is a very hard thing to deal with, and it is a very dark time in American history. The Supreme Court started to break all of the rules regarding slavery, and congress’s laws, and it is just not fair. Not only the enslavement, but the unfairness of how some slaves were able to gain their freedom in lower courts in other states and under the same conditions .This case was the main driving force that led to many riots, and eventually it even led to the civil war and the election of president Lincoln. The Dred Scott Decision has been one of the most controversial decisions in the history of America, and it is still commonly reflected on as a vital piece of American History. 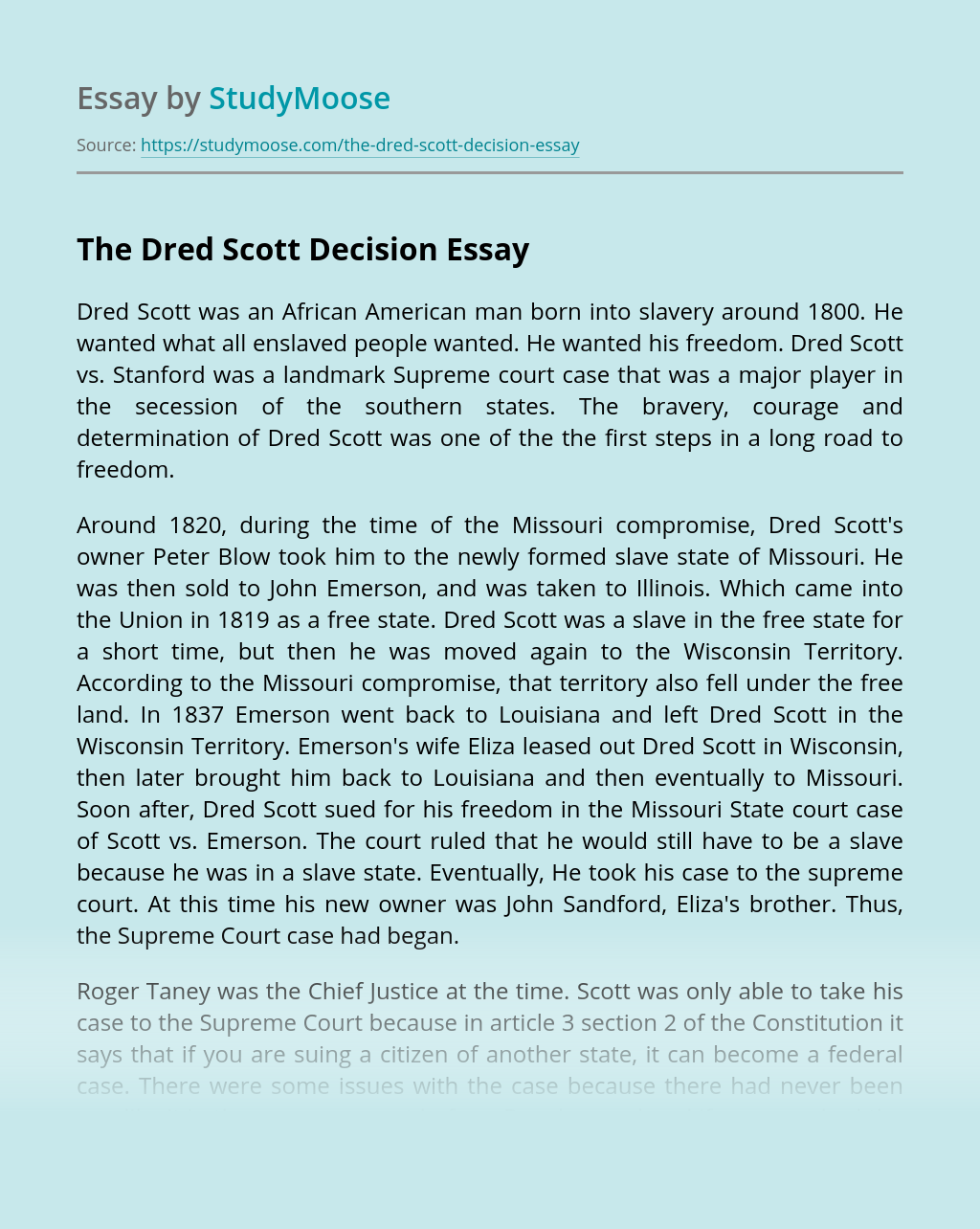