The Poem Marrysong by Dennis Scott

The poem “Marrysong” by Dennis Scott is about a man who is desperate to understand his wife as he struggles to predict her feelings and reactions. Scott uses a variety of ways including his method of unusual comparisons to create the unusual image of how this ordinary woman’s mind seems to work. This poem makes us think of how a normal relationship or marriage can be something so complex with many hardships coming with it.

Having the whole poem being like an extended metaphor as the poet first describes this woman’s mind as “territory” we straight away get the idea that this is a man’s view on a woman’s mind, thinking it as something being protected and impenetrable.

Don't use plagiarized sources.
Get Your Custom Essay on The Poem Marrysong by Dennis Scott Just from $13,9/Page

Further into the poem many references are continuously made about the woman’s mind as being like a “new country” an area unknown, yet to be explored and something to be part of “geography” (something that will be studied).

It is described that this man as having “charted” her but the “roads disappeared. The map was never true”. This gives us the unusual image of his wife’s mind being pathless furthermore much more complex than we would think; making it seem like bravery is needed to explore this completely unknown yet natural creation. This ladies mind is also once again constantly referred to as something of nature throughout the poem.

This again as an extended metaphor can make us think of someone’s mind as something different from what we thought of before. Her feelings are described to shift “without seasons”, which is a effective comparison as it shows how her mind isn’t like seasons that are predictable but something that constantly shifts, sometimes with no pattern. “Wind brought him rain sometimes, tasting of sea” further emphasises how someone’s mind can actually be so unpredictable and uncontrollable till it brings just sadness and tears.

The poems structure also creates an effect on the reader to help create the poets unusual image on this woman’s mind. Having the beginning of the poem heavy with enjambments it creates a slower pace than the ending which is smoother. This gives the audience the idea of how this man is feeling as he’s unsure and confused at the beginning as he starts to try to understand his wife. In conclusion I think the poem “Marrysong” strongly shows us how the mind of anybody can actually be something so complex.

It gives us the unusual image that everybody’s mind can be unique and each may be something similar to a “new country” with a whole different set of “seasons”. The poem successfully portrays this image threw the use of descriptions to create an extended metaphor. With the help of the structure and other literacy devices an unusual image is created to show how people’s minds and feelings can be completely unfamiliar. This leads to the theme of the poem, telling us about the hardships that can come with marriage as understanding each other is not always easy.

The Poem Marrysong by Dennis Scott. (2017, Oct 25). Retrieved from https://studymoose.com/the-poem-marrysong-by-dennis-scott-essay 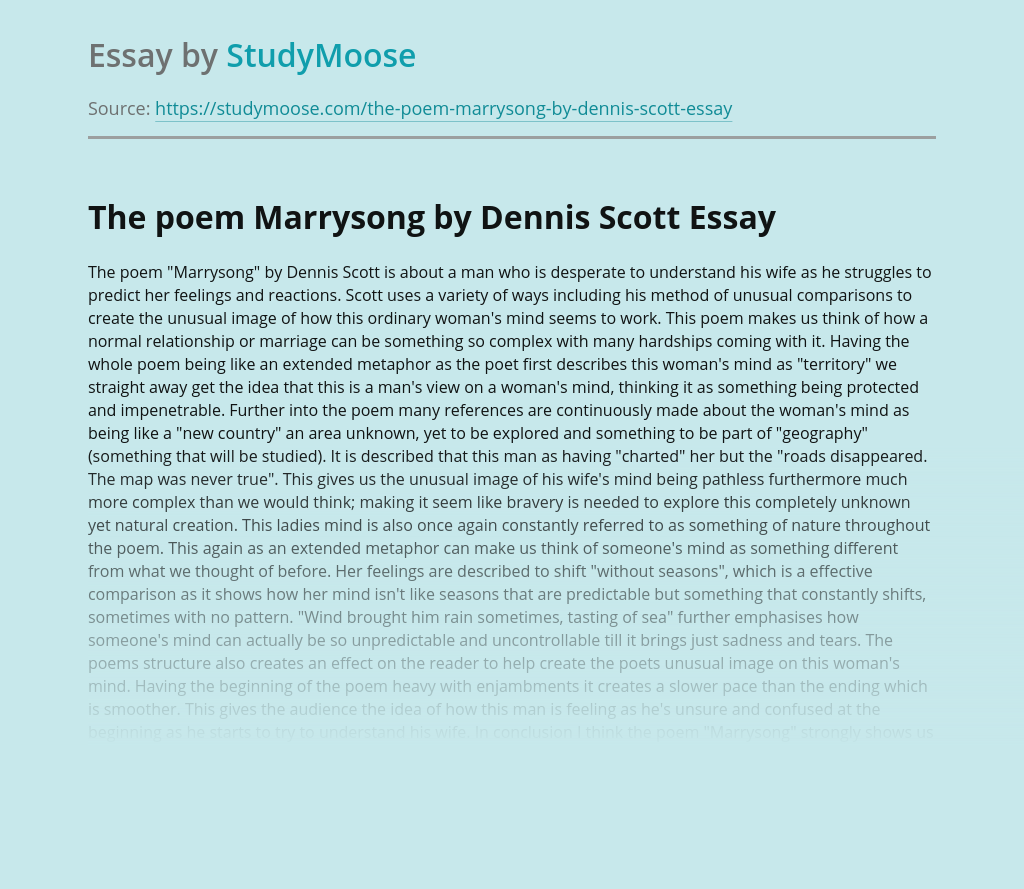 Not all people in this nation living in a loud location, the majority of them want to lived in a serene place with trees and fresh air and we all know that most of the time we can focus and believe thoroughly in a peaceful place. Sound pollution can be specified as undesirable or offending...

What impact does an absent father have on child development?

The absence of a father can have emotional and social consequences in a child’s development. Children manifest problematic behaviors including depression, aggression, delinquency, early role difficulties, as well as poor social and adaptive functioning and low self-esteem. In daughters, the absence of a father reveals different behavior dimensions, the way they view the opposite sex,...

Get Essay
Introduction to Personal Development in Health

1.1 Explain the duties and responsibilites of own role My role is to guarantee I treat all my clients as people, ensuring they always feel safe and at ease when I am around and doing my care, I make sure I check out the care strategy every day for each client to see if anything...

The Power of Language

George Orwell, the writer of many highly regarded literary works, is extremely interested in the power of language, mainly how it is abused. By analyzing two of his works, 1984 and Politics and The English Language, it is clear that Orwell is using his writing to bring awareness to the dangers of the manipulation, misuse,...

Improvement by means of Assessment in Learning Process

“Assessment for learning is the process of seeking and interpreting evidence for use by learners and their teachers to decide where the learners are in their learning, where they need to go and how best to get there”. Assessment Reform Group, 2002 The teacher has ultimate responsibility for setting schemes of work for the class...