“I am no bird; and no net ensnares me: I am a free human being with an independent will.”- Jane Eyre

Freedom is a normal human right but in our author’s case, it wasn’t. In 2001 Alicia keys wrote a song version of Maya Angelou’s caged bird poem. Both were called caged birds and were inspired by Paul Dunbar’s sympathy poem, which was written in 1899. In the three versions, a constrained and imprisoned bird wants to feel free and fly, like any other bird.

But each one of the three writers expressed it in a different way.

For example, Dunbar wrote it because of racism and slavery, since his parents were slaves. On the other hand, Maya Angelou wrote a caged bird because of her bad experience of being raped as a child, in addition to racism and sexism. Because Alicia keys related to these poems she decided to turn it into a song version and changed it to her point of view as a singer.

Throughout the 2 poems and song, the bird faces similar problems that limit it from feeling free and normal. However, the caged bird poem and song are slightly different from the sympathy poem but similar in many, because they express different feelings and points of view, thus used and presented the themes, symbols, and figurative language differently.

The poem (sympathy) has some different themes, that aren’t similar to caged bird’s song & poem, but at the same time, they have many similar themes.

For example, the first theme of “Sympathy” is all about wishing for freedom and hating on imprisonment. After all, it’s a poem about a “caged bird,” a bird that isn’t free to fly around and eat little worms or build a nest in a tree—which is, you know, what birds are meant to do. But the narrator describes this caged bird in order to describe his own need for freedom. Unlike Caged bird’s first theme, which is Freedom vs. captivity. The poem “Caged Bird” compares and contrasts the experience of a free bird with that of a bird held in captivity. While part of this contrast is meant to express the injustice forced upon the imprisoned bird, the comparison also allows the poem to explore how a free being thinks and acts, and to argue that freedom is a natural state for living beings.

The second theme that is shared between the sympathy and caged bird’s poem and song is race and the African-American experience. “Sympathy” and “caged bird” are poems and a song about a bird. So what in the wide world of sports does it have to do with race? A lot actually. Dunbar was an important African-American poet of the Harlem Renaissance, a period when there was the development of African-American literature and arts. And the fact of the matter is, a lot of writers and poets of the Harlem Renaissance wrote about race. After all, they were still living in an isolated country where blacks were treated as second-class citizens. On the other hand, Maya Angelou was also an African-American poet. She wrote the caged bird poem to express her bad experience in being raped as a child, in addition to racism and sexism, as shown In lines 8-14, 15-22, and lastly 27-38.

Both Caged birds and sympathy have many similar symbols but meant and used them in different ways throughout the two poems and songs. For example, the key symbol of both poems and songs is the bird. The bird whether caged or not is a traditional symbol of freedom simply by their unique ability to fly. Taking flight is about as reasonable as being completely released and free from the chains. Put that bird into a cage and the characteristic symbolism of freedom is lent the tragic aspect of being kept in slavery. On the other hand, Maya Angelou’s bird represents both herself and those who have experienced the cruelty of racism and sexism. In her autobiography, I Know Why a Caged Bird Sings (1969), Angelou discusses the pre-Civil Rights oppression of black people, especially black women, who experienced sexism in addition to racism.

The second symbol that they all share is the cage. The cage is a powerful metaphor applied specifically to present slavery as the universal symbol of African-American life. Beyond the poem’s specific meaning relating to blackness in America, of course, the cage can represent any situation in which the speaker might feel he is being held back from achieving his potential. In each of the works, the cages represent something. For example, in sympathy, it represents how the authors want to be freed from racism, on the other hand in the Caged bird poem it represents how the author wants to be freed from sexism in addition to racism and gender inequality. However, in the caged bird song, it represents Alicia key’s life on stage and as a popular singer. In the end, each author presented and meant different things although they used the same symbols.

The last key similarity between the two poems and song are poetic devices. Both poems and the song has the same devices but used them differently. All of them used metaphors, alliteration, and personification. Sympathy used a controlling metaphor device that runs throughout the verses in which the caged bird represents any and all humans being held in slavery, and specifically the African-American. On the other hand in the caged bird poem, the metaphor device was more used. Like when the author compares wind to water by calling them “downstream” and “current”. The author also uses metaphor in the use of two birds, “free bird” and “caged bird”. She used both metaphors to compare and contrast between the privileged and non-privileged sections of the community. The free bird represents the privileged and the caged bird represents the non-privileged part of the community. 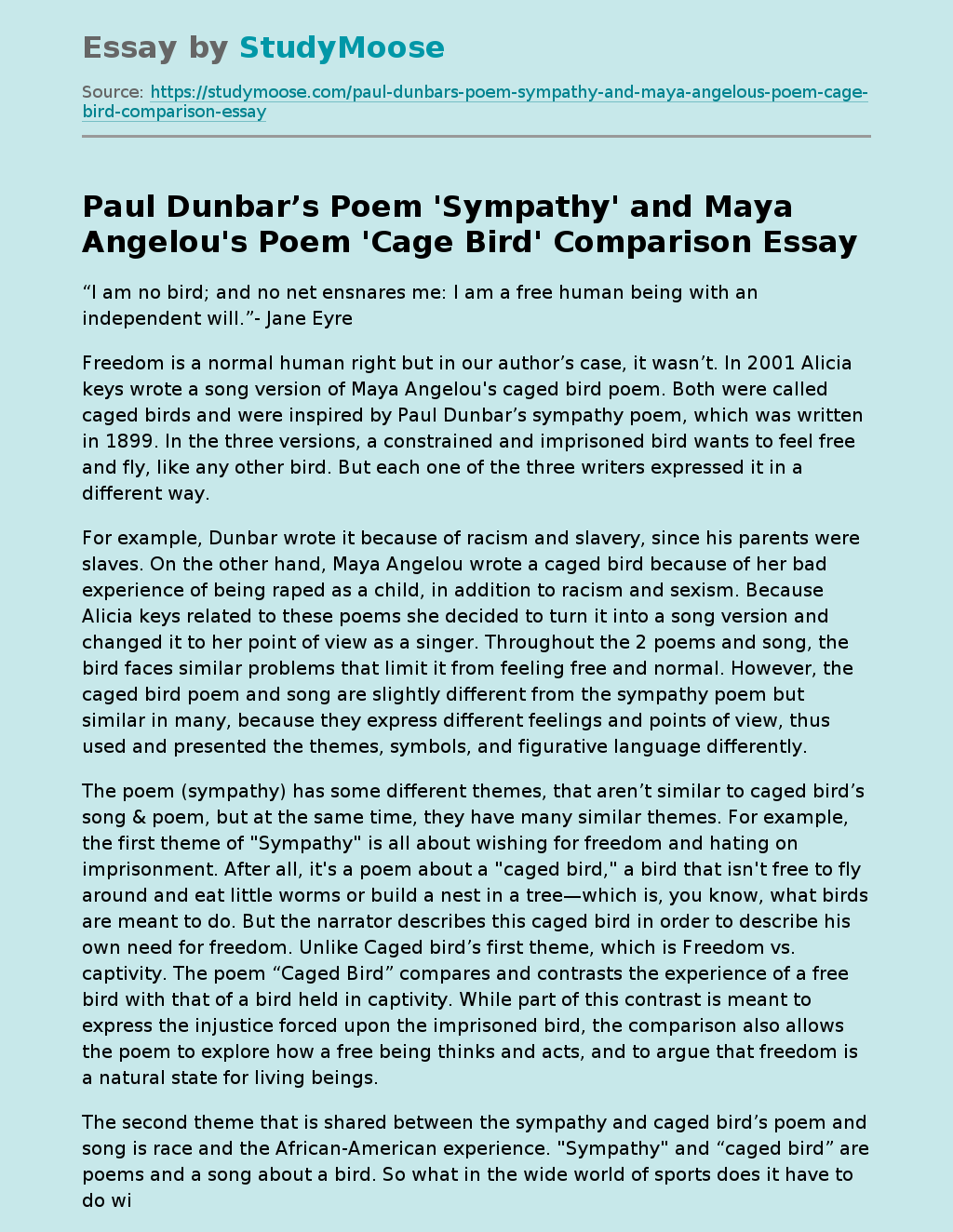