This paper is a book review of Maya Angelou’s “Gather Together in Maya’s Name”, personal narratives and poems around the theme of motherhood.

Maya Angelou’s “Gather Together in Maya’s Name” “A baby’s love for his mother is probably the sweetest emotion we can savor.” (Angelou) By consistently weaving the theme of motherhood into her literature, Maya Angelou creates both personal narratives and poems that the reader can relate to. Her exploration of this universal theme lends itself to a very large and diverse audience.

Don't use plagiarized sources. Get your custom essay on
“ Maya Angelou’s “Gather Together in Maya’s Name” ”
Get custom paper
NEW! smart matching with writer

Throughout Angelou’s works, she allows her followers to witness her metamorphosis through different aspects of motherhood. Well-worked themes are always present in Angelou’s works- self- acceptance, race, men, work, separation, sexuality, and motherhood. However, Angelou uses the latter to provide “literary unity” (Lupton 7-8). Maya Angelou was born Marguerite Annie Johnson on April 4, 1928, to Vivian Baxter and Bailey Johnson. After three years her parents divorced, and both Maya and her older brother Bailey, were sent to Stamps, Arkansas.

Once in Stamps, the children were cared for by their paternal grandmother, Mrs. Annie Henderson (Neubauer 21). In her first book, I Know Why the Caged Bird Sings, Angelou tells the story of her childhood. She also makes the reader keenly aware of her close connection with her grandmother. Stephen Butterfield says of Caged Bird (in his Black Autobiography in America, 1974): “Continuity is achieved by the contact of mother and child, the sense of life begetting life that happens automatically in spite of all confusion- perhaps also because of it.

” Annie Henderson is a God-fearing, independent woman whose firm hand leads Maya throughout many rough spots in her childhood. It is through Mrs. Henderson’s values of self-determination and personal dignity that Maya’s idea that she is “shit color” slowly fades away (Vermillion 33). Maya fails to see her grandmother’s negative traits. She sees only a woman that many people, both white and black, respect. The general store that Annie owns is the center of activity in Stamps. This centralization of the store has a direct correlation to the way Annie is the moral center of Maya’s childhood family (Lupton 8-9). After ten years of living with Momma Henderson, Maya and Bailey are sent to join their mother in St. Louis. By the time the children are in their teens, they have covered the western portion of the United States, traveling between their parents’ separate homes and Momma Henderson’s in Arkansas. Each move greets them with a different set of relatives or another of their parents’ lovers. The turmoil that Maya undergoes causes her to question many aspects of herself. As a young woman she begins to doubt her sexual preference and engages in a onetime sexual encounter to prove her sexuality. After this experience, Maya finds herself pregnant. Angelou ends her first book with the birth of her son, Guy. This occurrence lends itself to a note of awakening that carries through Maya’s next book, Gather Together In My Name. Between the conclusion of Caged Bird and the beginning of Gather Together, there is practically no break in the narrative. The former ends with Guy’s birth and the latter when he is just a few months old. In its totality, Gather Together tells the story of Guy’s first three years and of Maya’s struggle as a young, single mother who is struggling “to achieve respect, love, and a sense of self- worth.” (Neubauer 22-23). One of her main motives during these early years is to spare her son the insecurity and rejection that Maya faced as a young child. However, Maya’s professional career is also developing during this time. Angelou worries about her responsibility to care for her young son and to provide a stable environment for him (Lupton 24-25). In her third book, Singin’ and Swingin’ and Gettin’ Merry Like Christmas, Maya discusses her feelings of apprehension and guilt stemming from her leaving Guy to further her career. Despite her internal conflicts, Angelou accepts a role as Ruby in Porgy and Bess. After taking on this role, Angelou places Guy in the care of her mother. Maya is aware of how her actions mirror those of her own mother when she was young (Lupton 10). While performing with the theater group, Maya travels throughout Europe, the Middle East, and North Africa. While in Rome, she must cut short her engagement because Guy is suffering from her extended leave. She learns that her son has developed a severe and seemingly untreatable rash in her absence. After returning to San Francisco, Guy recovers, and together they reach a new level of trust and interdependence. Simultaneously the two realize that their separation is now over for good (Neubauer 25). With a promise that recalls the last lines of Gather Together, Angelou vows to Guy: “I swear to you, I’ll never leave you again. If I go, you’ll go with me or I won’t go” (Lupton 14). Singin’ and Swingin’ closes in a sentence that stresses, through its three nouns, the underlying themes of the book: “Although I was not a great singer, I was his mother, and he was my wonderful, dependently independent son.” This sentence not only works to close Angelou’s first three books, but also puts to rest Maya’s feelings of self-doubt and insecurities about motherhood (Lupton 14). From the time Maya was an infant, she had experienced many events which distorted her view on motherhood and the role of a “mother.” This skewed perception created many conflicts throughout much of her life. However, by her constant growing and evolving, Maya was able to overcome her altered views and become a loving and devoted mother, daughter, and granddaughter. Outline I. Introduction II. Background Information III. I Know Why the Caged Bird Sings A. Mrs. Annie Henderson in Stamps B. Move with Vivian Baxter in San Francisco C. Maya’s pregnancy IV. Gather Together In My Name A. Theme of book B. Maya’s career and the results V. Singin’ and Swingin’ and Gettin’ Merry Like Christmas A. Role in Porgy and Bess B. Absence from Guy while on tour C. Relationship closure VI. Conclusion Bibliography Angelou, Maya. Gather Together In My Name. New York: Random House, 1972. Angelou, Maya. I Know Why The Caged Bird Sings. New York: Random House, 1969. Angelou, Maya. Singin’ and Swingin’ and Gettin’ Merry Like Christmas. New York: Random House, 1976. Lupton, Mary Jane. “Singing the Black Mother: Maya Angelou and Autobiographical Continuity.” Contemporary Literary Criticism, Vol 77. Detroit, MI: Gale Research Inc., 1993. Neubauer, Carol E. “Maya Angelou: Self and A Song of Freedom in the Southern Tradition.” Contemporary Literary Criticism, Vol 77. Detroit, MI: Gale Research Inc., 1993. Vermillion, Mary. “Reembodying the Self: Representations of Rape in `Incidents in the Life of a Slave Girl’ and `I Know Why the Caged Bird Sings.” Contemporary Literary Criticism. Detroit, MI: Gale Research Inc., 1993. 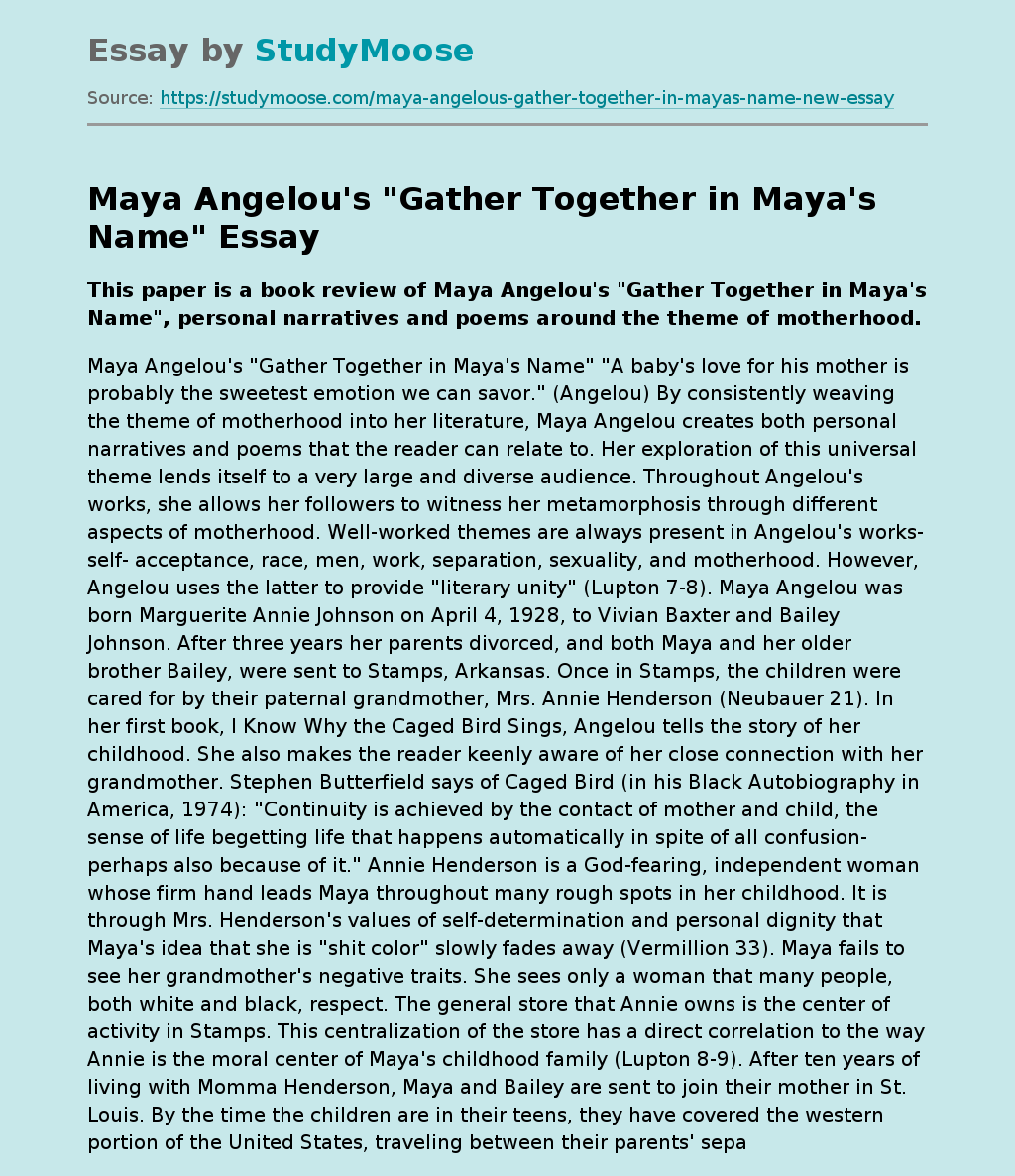