"These Yet to be United States" by Maya Angelou

Maya Angelou could have been writing her poem, “These Yet to be United States,” with many different motives or messages. This work leaves the reader open to many different interpretations and viewpoints. The many underlying tones and possible themes that are implied by certain descriptions get the reader looking deeper into the true meaning of the poem. The main focus, however, is on the United States as a whole, the dominance of the government, and the effect on the children being born into this lifestyle.

Don't use plagiarized sources. Get your custom essay on
“ “These Yet to be United States” by Maya Angelou ”
Get custom paper
NEW! smart matching with writer

She also supports and develops her ideas with many different literary techniques.

The title of the poem is well chosen and leads in the right direction of the message and topic of the poem. It also allows tying certain ideas in the poem together, which may have been difficult to notice without having a title like the one Angelou used to describe the poem. It is saying, despite misconceptions and actions of the United States, it still cannot call itself “united” because of the way things work and how society is setup and run.

There are two main thoughts that could be formulated by reading the poem and analyzing any underlying meanings of certain phrases. One is pertaining to the topic of war and how the country handles itself and foreign affairs. The other is that the problem is internal and they way things are run are not copasetic to citizens and people living in the United States of America. However, these two separate thoughts can be tied together into a general consensus of the unhappiness and disappointment Americans have for their government.

With that basic idea of where Maya Angelou is going with this poem, the literary techniques and writing style can be analyzed a little further and applied to the main idea and message of the poem. The tone and diction of the poem, used in conjunction, is one of the more noticeable techniques that Angelou uses to strengthen the poem. The tone of the poem shows the somewhat fear and deep concern that arises in people as a direct result of certain actions of the government. Angelou’s diction, or choice of words, for certain descriptions is very cleverly chosen and powerful. Such phrases as: “Tremors of your network,” “Your open mouth in anger,” “obliterate the spring,” and “your mushrooms fill the sky,” all contribute to the strength of the poem. Also, single words in each of the stanzas have the same effect with terms like curses, poisoned, grim, dread, threatened, terror, and fear.

There are also some elements of symbolism that can be noticed, which in this poem helps support the main idea mostly on a larger scale. The mouth is used in the first stanza as a symbol to show that the communication between United States and its’ people is one of negativity, especially when expressed fear in the same line. The use of the sky, in this case where it is filled with mushroom clouds, shows the domination and control the U.S. has, being that the sky is above everything.

In the last stanza, the “whitened castles” show the inferiority and seclusion of the common people to the government in that the castle is a symbol of enclosure. In other works of literature the castle can be seen as a fortress, which holds an ominous person or group, and is sometimes a target to be overthrown. This can also be noted as a direct comparison to certain buildings in Washington D.C. where government organizations meet and do business. The White House, Capitol Hill, and other establishments all apply to this theory, and are white in color as well.

In the last stanza, Maya Angelou really drives her point home using the children of the United States as an outlet for her message. This part of the poem also develops the author and reader’s relationship by causing the reader to sympathize with her viewpoints. This stanza describes that the current situation is that children are being born into an ongoing problem of government dominance.

This is described in the phrases “Their nights are threatened daily/by a grim inheritance,” and “cannot hear the curses/which fill your children’s throats.” Overall, the poem “These Yet to be United States,” by Maya Angelou, conveys the message that the government in the U.S. causes internal problems for its citizens and it is an going cycle that continues as new children are born into the country. With her use of symbolism, tone, diction, and the relationship, which she creates between the reader and the writer, her message is conveyed very powerfully and with more impact.

"These Yet to be United States" by Maya Angelou. (2016, Jul 16). Retrieved from https://studymoose.com/these-yet-to-be-united-states-by-maya-angelou-essay 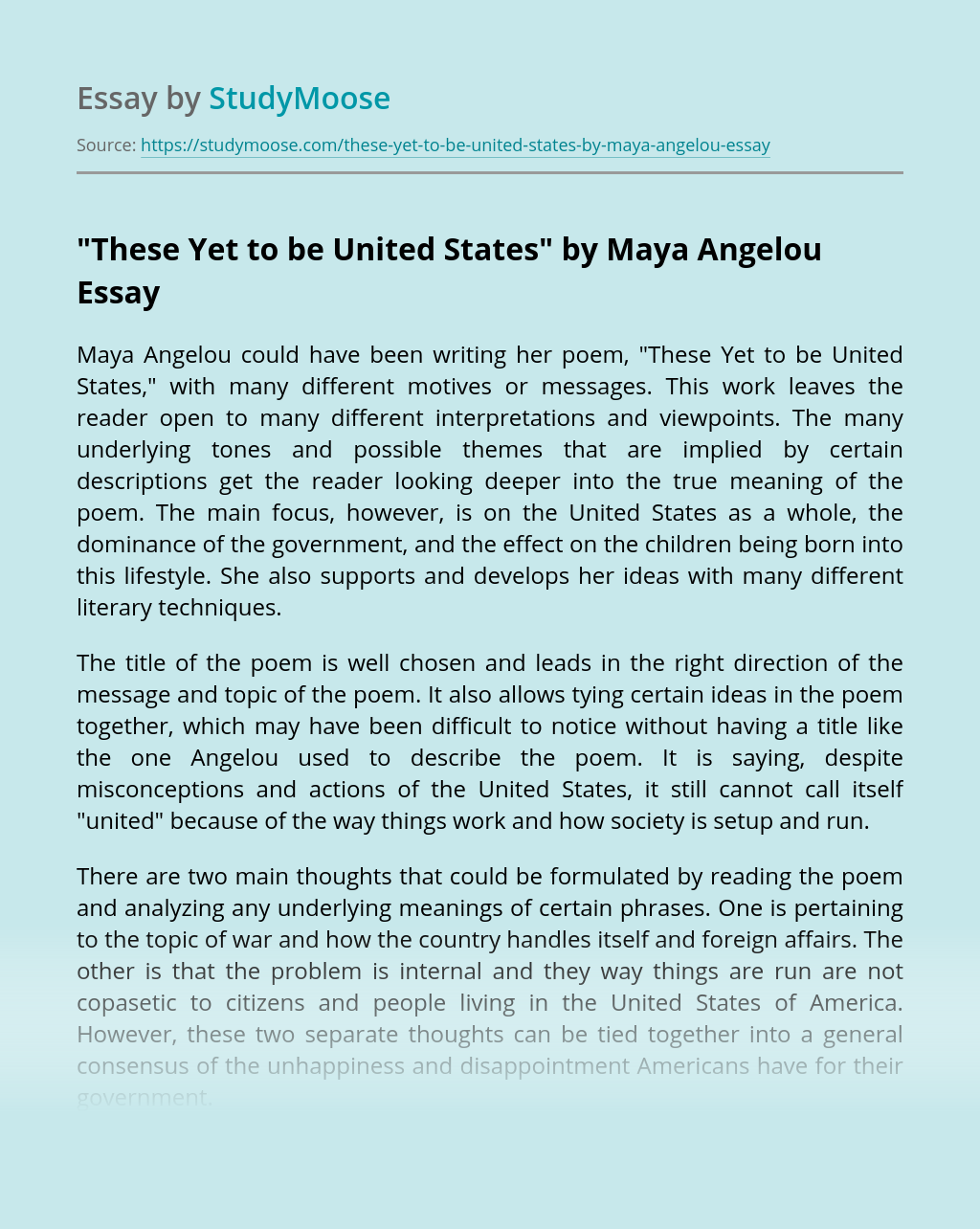