“Champion of the World" by Maya Angelou

Maya Angelou is the author of thirty best-selling books. In a famous autobiography she wrote a novel titled I Know Why the Caged Bird Sings. In this story she composes a chapter remembering her childhood called “Champion of the World.” This chapter is a memoir during the late 1930’s when Joe Louis became an African American hero by defending his heavyweight title against a white contender in a boxing match. Throughout “Champion of the World” Maya Angelou uses language, rhythm, and actions of character to create suspense, tension, and anticipation for the reader.

Don't use plagiarized sources. Get your custom essay on
“ “Champion of the World” by Maya Angelou ”
Get custom paper
NEW! smart matching with writer

First, Maya Angelou implies a strong rhythm to the story. The reader can easily recognize when suspense is occurring because the sentences become shorter. For example, when Angelou and her family thought the Joe Louis was about to lose the sentences were about three to four words long. “My race groaned. It was our people falling.” “We didn’t breathe. We didn’t hope. We waited.” The choppiness of these sentences grew very dramatic.

Though, as things were getting better for the African American boxer, the sentences grew longer; “There were a few sounds from the audience, but they seemed to be holding themselves in against tremendous pressure.” When the sentences lengthened, the suspense diminished. Despite the volume of sentences throughout the story, Maya Angelou also uses ellipses to form rhythm. Ellipses were used a few times in the story, but it is greatly emphasized at the end of the match. “Here’s the referee. He’s counting.

One, two, three, four, five, six, seven… Is the contender trying to get up again?” “Let’s get the microphone over to the referee… Here he is. He’s got the Brown Bomber’s hand, he’s holding it up… Here he is…” “The winnah, and still heavyweight champeen of the world… Joe Louis.” All of these sentences are building up tension to keep reading because the reader can feel the anticipation of the ending.

Furthermore, the language in this piece is unusual. The author uses the words “rape, whip, lynching, clutched, maimed and penetrate” as if the story was about a rape. Ultimately, using these words helped illustrate the meaning of winning this battle and defeating Joe Louis’s opponent with no mercy. It was not only for the boxer but for the people too. Maya Angelou introduces racial comments as well. “White boy” and “cracker” were used in the story. This language helped correlate with the black versus white aspect. In this time period, blacks and whites were very segregated. The reader can easily discover the unequal disparity between blacks and whites through the language, especially when Joe Louis wins and all his African American fans felt just as equal in the world as white people. “If Joe lost we were back in slavery and beyond help. It would all be true, the accusations that we were lower types of human beings.” Winning this battle was not just for the title when it came to Joe Louis and his black community; it was for their pride.

Lastly, the author uses the setting and the actions of the characters to recognize the importance of the fight in “Champion of the World.” They watched the match in Maya Angelou’s Uncle Willie’s store. Angelou gives a clear image in the reader’s head of how crowded the story was of family and friends. The radio was turned up to the last notch so that the children sitting on the porch outside could hear. The women sat on chairs, stools, and wooden boxes, men had to lean on shelves or on each other, while babies were perched up on every lap possible. Maya Angelou stresses the family rule of quietness during the fight. No one was aloud to use the cash register to ring up customers because it was simply too noisy and it might “shake up the atmosphere.” So when the unusual customer dragged along Maya or her brother would lay the coins down on the cash register instead.

“Champion of the World" by Maya Angelou. (2016, Mar 21). Retrieved from https://studymoose.com/champion-of-the-world-by-maya-angelou-essay 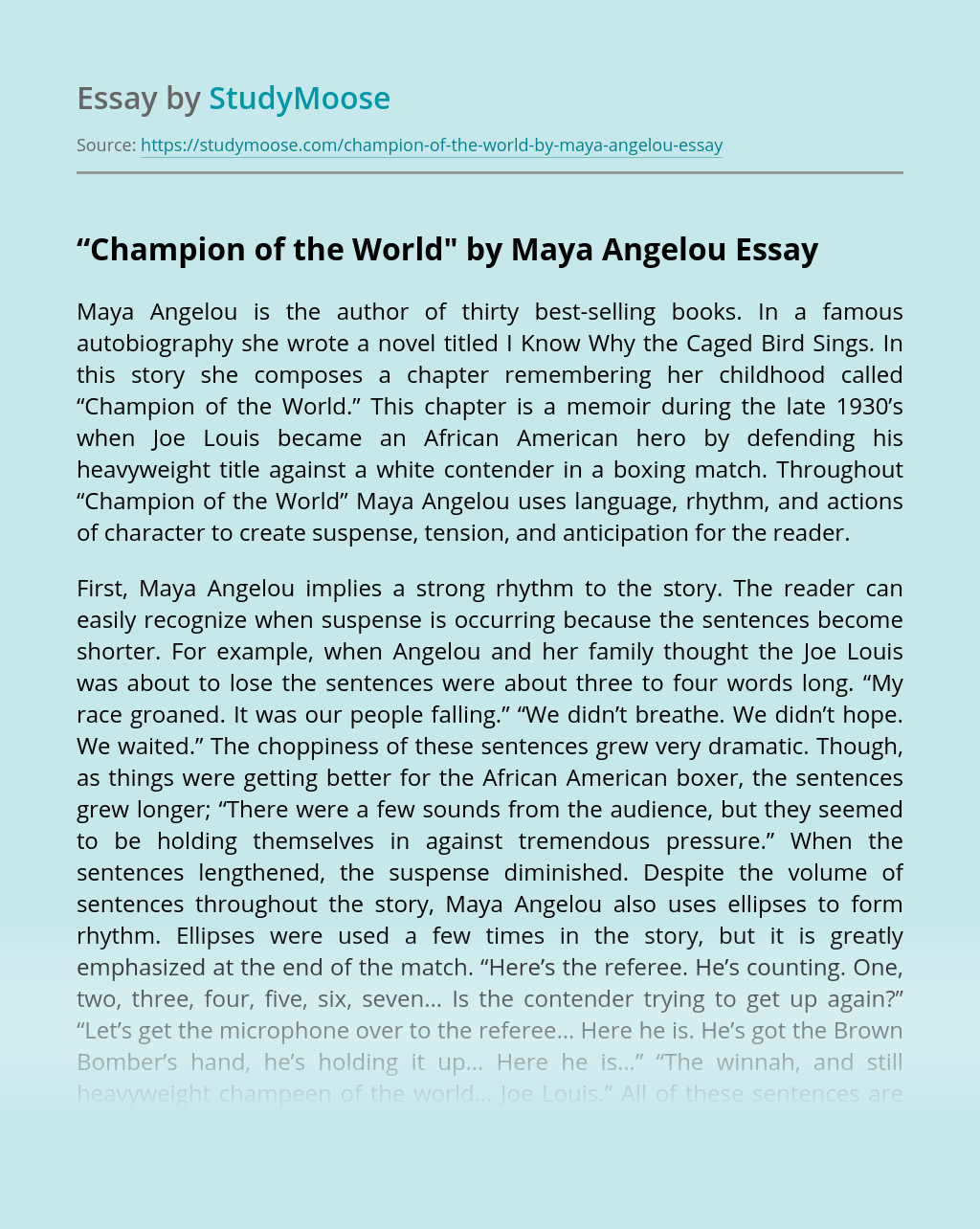