Still I rise and Caged bird By Maya Angelou

The poems I decided to use are “Still I rise” and “Caged bird” By Maya Angelou I choose to do these poems because they both set a similar theme. The theme is obviously based on discrimination and racism in America between Black and White people. But although the themes are the same the messages in each poem are different. In “Still I rise” Maya Angelou who is the speaker is telling her readers about the discrimination she has overcome and how these obstacles have made her the person she is today and in “Caged bird” she is showing how black people are trapped and limited because of the colour of their skin.

Turn in your highest-quality paper
Get a qualified writer to help you with
“ Still I rise and Caged bird By Maya Angelou ”
Get high-quality paper
NEW! AI matching with writer

But although the message in each poem is different it always comes back to the theme of racism and discrimination and how white people have felt superior to black people. Maya Angelou has developed the theme of each of her poems because of personal experiences she has faced in her life which has helped her to make her poems successful and inspirational.

Imagery is used to create a mental picture in your mind to help make the poem clearer. In “Caged bird” and “Still I rise” imagery is strongly used throughout these poems for example in Still I rise “Shoulders falling down like teardrops” we imagine her shoulders slouching in the shape of a teardrop which also associates with sadness and would create sympathy in the reader and in Caged bird “A free bird leaps on the back of the wind and floats downstream till the current ends and dips his wings in the orange sun rays and dares to claim the sky.

The use of strong imagery is present because you imagine a free bird soaring through the sky because it isn’t bound to a cage, it makes you think and feel the sense of feeling alive and free. The second poetic device is metaphor. In “Caged Bird” and “Still I Rise” the use of metaphor is ever present in each of these poems but more so in caged bird than Still I rise because Caged bird itself as a whole is a metaphor.

I’m a black ocean, leaping and wide” which was used in still I rise the effect of this metaphor is to show that they may see her as just a “black women” but to her she is more than what they say she is. And in caged bird “Bars of rage”, “but a caged bird stands on a grave of dreams”, “his shadow shouts out” and “his wings are clipped and his feet are tied” the effect of these metaphor are used to show how they are disadvantaged for their skin colour which makes them feel undermined and unworthy and freedom is only a hope and a distant dream.

The third and final poetic device is repetition. In caged bird “The caged bird sings with a fearful trill of things unknown but longed for still and his tune is heard on the distant hill for the caged bird sings of freedom. ” I believe the effect of repetition is to state the entire message of the poem, the poet is saying that black slaves (who is the caged bird) want to be more than what the “white people” want them to be, they don’t want to be anybody’s slave, they want to be free.

They want to be these things but can’t because of their skin colour which is their cage, she feels as if she and other African Americans are limited to options because of her skin colour. And in still I rise the repetition of “still I rise” is also used to state the message of the poem which is she is constantly rising up against discrimination because she was brought up in a very racist part of America which in my words has shaped her into the strong African American women she is today.

So the message of the poem is no matter what people do or say to, I will stay strong and overcome it. I think the entire tone of each of these poems are strong Emotional, sadness, full of hope and inspirational, the use of words made it seem as though the character in the poem is talking to the readers by doing so it helps the readers to feel more involve with the poem emotionally which helps to make readers realize what she went through and her thoughts and feelings it also helps create a connection to the poem either on a personal or emotional basis.

Still I rise and Caged bird By Maya Angelou. (2016, Nov 29). Retrieved from https://studymoose.com/still-i-rise-and-caged-bird-by-maya-angelou-essay 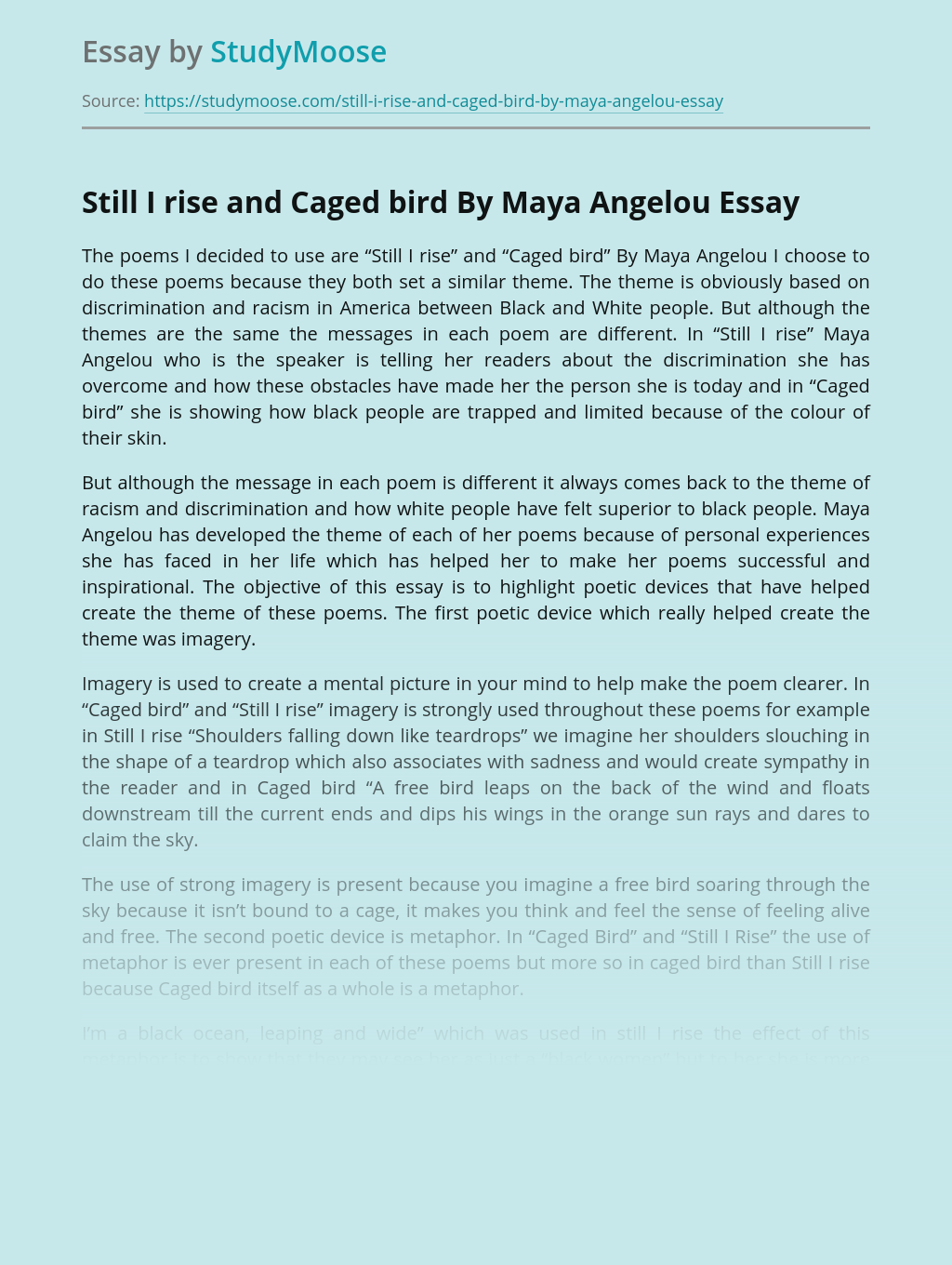 Turn in your highest-quality paper
Get a qualified writer to help you with
“ Still I rise and Caged bird By Maya Angelou ”
Get high-quality paper
Helping students since 2015
Stay Safe, Stay Original