In the novel Enders Game the author Orson Scott Card shows us a complete different world than we are used to. Set into the future, the world has just recovered from a devastation alien war that was won by a fluke of luck by our soldiers. Although this time we will strike back, in preparation for the upcoming “Bugger” war the worlds smartest children get drafted to join the battle school program set in space to learn combat form an early age.

Don't use plagiarized sources. Get your custom essay on
“ “Enders Game” by Orson Scott Card ”
Get custom paper
NEW! smart matching with writer

One of these kids happened to be Andrew “Ender” Wiggin, the six year old was stripped of his childhood, taken away from his family and sent to battle school. All his life Ender has extreme pressure on him because six year old Ender was meant to save the world.

Throughout the novel Orson Scott Card blurs the thin line between appearance and reality, through the concept of “games” two different examples of this are Enders stays at Battle School and then again at Command School, throughout both Ender was constantly played and manipulated for the “greater good”.

While at Battle School Ender was objected to isolation, due to the jealousy of the other children. Ender grew accustomed to the hostility and tried to not let it bother him as much as he could. In the private study time given to the child soldiers they were free to do what they wished.

Not having many friends and not finding the studies overly challenging Ender would play the games on the Battles School’s program. Ender quickly became engorged in a role play game called the Giants Drink. This game was deemed impossible but Ender became obsessed with it and reached levels no one had ever seen before. Ender could not stand to lose at anything so he went to any extreme needed to further him in the game.

Ender was to always remember the details of this game, because to complete the level time and time again Ender had to play maliciously and evilly, he had to play as a murderer and a cheater all the qualities reminding him of his brother, Peter who Ender despised and wished to never turn into. Later on into the novel Ender is told to search for new planets to colonize. While on his mission to find new planets to inhabit Ender stumbles upon a plant that seemed to feel a little too familiar having an uncanny resemblance to the landscape and structure of the plant of his childhood pass time game, The Giants Drink. Only to discover this planet was created for him as a means of communication by the “Buggers”.

“He had played here too many times as a child not to know this place. But it was not possible. The computer in the Battle School could not have possibly seen this place”

A game form his past, what he though was mere mush of pixels and graphics turned out to become a reality. Orson Scott Card made us believe throughout the novel that The Giants Drink was just a game. Whereas it was actually always a secret place only Ender had ever visited, making it perfect to use as a secret means of communication. Orson Scott Card pushed us beyond what we thought was quite insignificant and made it more or less one of the most important event to take place in the novel. By not sticking to convention and going above and beyond making us think more about how what was just a game turned into reality. Furthermore while at Battle School all the solider had to participate in “Battles” again each other. These Battles were often the highlights of these children’s days, when Ender became a commander and got his own army to train for these pretend Battles.

He quickly learned that he was never going to be treated fair and that all odd will always be stacked against him always trying to defeat him. Time and time again Ender won the Battles he took part it, having a perfect win streak. This infuriated many and Ender made many enemies, even the teachers seemed to be against Ender give him multiple battles a day and also giving him two armies as opponents instead of the usual one. All his life Ender was isolated and treated unfairly so none of this was new to Ender. Whatever situation was thrown at him Ender came out at top because of his intelligence, natural born leadership and yearning to win. Although these battles seemed to be just a game to tear apart the children the skills learned in this game could be the difference between life and death, once again confusing us about what is the illusion in it all.

Ender graduated through the Battle School program faster than anyone and got transferred to the next step, Command School. The first little while in
Command School was spent in complete isolation, it was more terrible than Battle School which Ender thought was not possible once again only being left with the companionship of the games they offered. After a year of complete seclusion Ender meet with his mentor, teacher, friend and enemy Mazer Rackmen, the man who was responsible for saving the human race from the second “Bugger” invasion. Mazer was the only person Ender ever got a chance to be with. Together they went through anything and everything that could possibly be an aid to Ender when the “Buggers” attack. Mazer got Ender to play the simulator games again but now in a complete different way, it was no longer a one man game, Ender verses The Computer but now it was Ender Commanding different squadron leaders.

The leaders which turned out to be the small group of friends Ender had accumulated over his stay at the Battle School. Together they worked amazingly, using Enders intelligence and great leadership skills. With Enders desperation to always win they always came out of battles victorious, he may have lost his friends in the process of becoming this amazing leader but he gained their complete admiration and respect. Closer to the end of this novel, Mazer gives Ender his final examination, being sick of it all Ender just wanted to end it as soon as he could.

Not into it at all Ender plays half-heartedly in the bigining, when being faced with his challenge Ender steps it up knowing he was once again set for failure. Not wanting the teachers to have the satisfaction of One Upping Ender he plays in a way he hates, as a cheat but it seems to once again be the only way to succeed in these games. After beating his final examiniation Ender finds out all of the simulations he played with his squadron leaders were not games but they were they actual “Bugger” war which Ender had fought and won without even knowing what her was doing.

“You made the hard choice, boy, All or nothing. End them or end is. But heaven knows there was no other way you could have doing it. Congratulations. You beat them, and it’s all over.”

“Real. Not a game. Enders mind was too tired to cope with it all.”

Absent mindedly Ender has annihilated a whole species, making him a murderer. Thinking he was playing a game Ender had fought a galactic war.

Orson Scott Card hazes the thin line between your appearances and your realities. What Ender thought was a game was a life or death situation. If Ender would have listened to his heart and lose the last game, he could have saved an intelligent species, but we never know our outcomes until our decisions have been played out and it is too late to change our mind. Orson Scott Card highlighted the fact that every little thing in someone’s life makes a huge impact. As insignificant as it may seem everything has a purpose. If Ender had not played these games to win the “Buggers” could very well be alive and not knowing their intentions, letting them live was too big a risk.

All throughout his life Ender had been played with, an object of constant manipulation and mind games. Battle and Command School were no different than Earth in this aspect. On Earth Ender was bullied and manipulate into doing what he wants by Enders evil older brother Peter, while at Battle School, Colonel Graff the head administrator never failed to lie to Ender, only tell him half the truth and additionally manipulate him, When Ender got to his last training program Command School Ender was manipulated and lied to in a way he could not even begin to imagine

“Of course we tricked you into it. That’s the whole point.”

At the end Colonel Graff even admits that all the manipulation, lies and hostility towards Ender was a part of his and Mazer Rackmens plan. Ender having been lied to and brought back to his murderous side, the part of him he hated the most. Ender was furious and could not bear to look at anyone and went back to his room. Orson Scott Cards showed us that it’s better to not trust anyone. What you think is really happening might just not really be happening and that you should always keep a check on your reality verses your illusions.

Throughout the novel Orson Scott Card blurs the thin line between appearance and reality, through the concept of “games”. At times it is quite difficult to grasp your appearances verses your realities because you get too caught up in the little things that you forget to stop and look at the bigger picture. Only if you look at your life from a neutral perspective will you be able to tell what is really happening and what is a fragment of your imagination. Orson Scott Card illustrated this point amazingly throughout this novel. 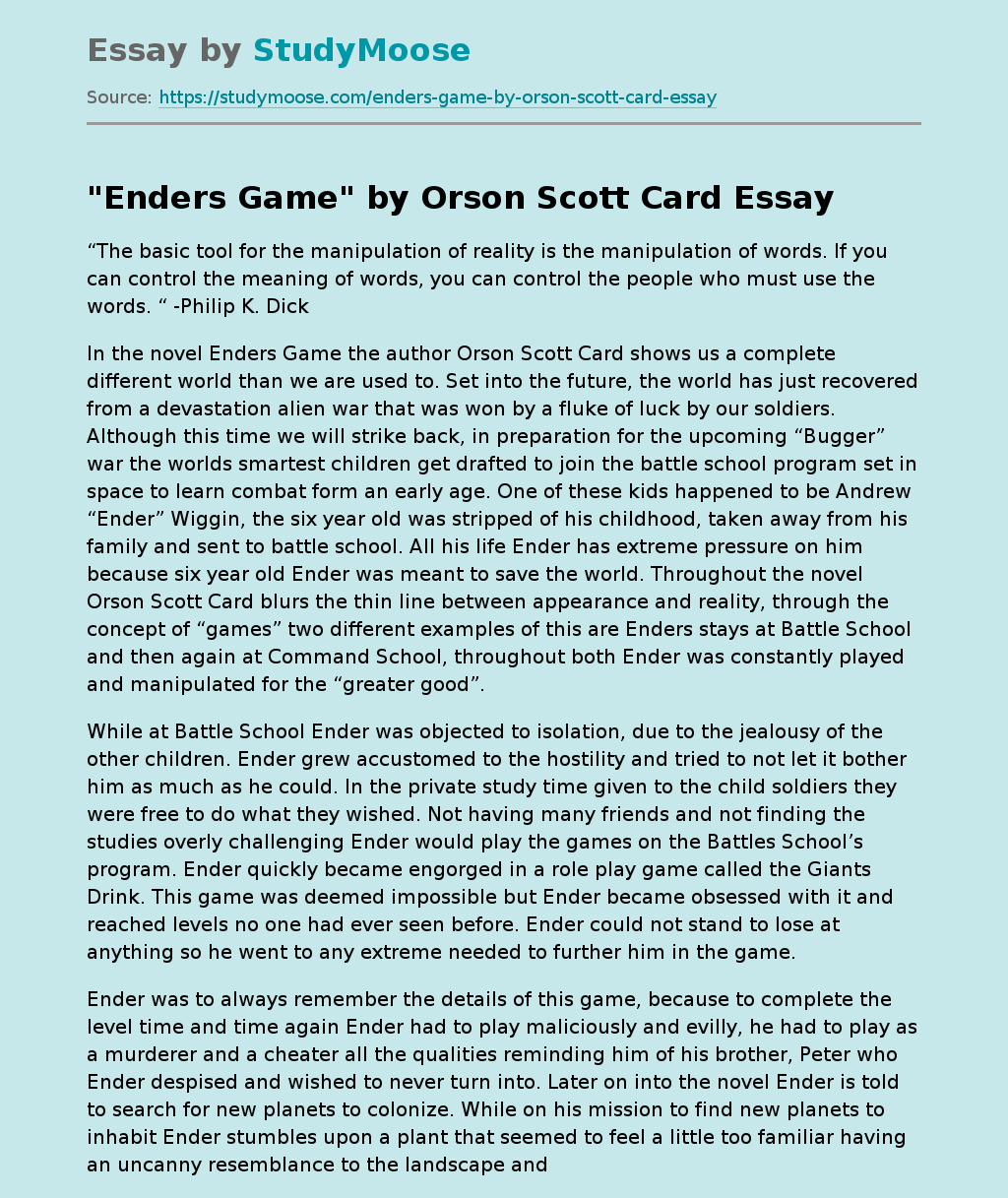