The Stanford Prison was an experiment to study the psychological effects and reactions of students pretending to be prisoners and guards. This study was conducted in 1971 and although it was suppose to have duration of 2 weeks, it finished after just 6 days.

The experiment required 24 male students for the role-play and paid $15,00 per day. Several volunteers answered to an ad on a newspaper and were selected after being interviewed. They were all healthy and there were no psychological differences between them. The role-play allocation for guards and prisoners was randomly made.

Don't use plagiarized sources. Get your custom essay on
“ The Stanford Prison Experiment ”
Get custom paper
NEW! smart matching with writer

The fake prison was situated in the basement of the Stanford University’s Psychology department. Guards were not allowed to harm prisoners or use any type of physical strength but could and should make them feel bored and powerless, frustrated. Every prisoner was picked-up and arrested at their own house in front of everyone and taken to the prison where they were undressed, humiliated, insulted and were obliged to carry a chain on their foot.

Inside the prison, each prisoner had a different number assigned that was used as their identification, instead of their names.

The guards started to use psychological tactics and abuse towards the prisoners. First they started by rewarding the good prisoners but soon after there were prisoners becoming more rebellious and the guards went back to treating them all at the same level. Two of the prisoners quit after a few days and the rest became emotionally traumatized with the guards’ behavior. The experiment was aborted after 6 days when a graduate student alerted Zimbardo about the conditions and effects that this experiment was having on students.

The Stanford Prison experience received strong criticism as it was considered unethical, biased, lacked control and the active participation and influence that Zimbardo had in this experiment. This was a very famous study at the time and still today psychologists and researchers use it as an analysis o human behavior.

One can say that what prevented the “good guards” from objecting the “tough guards” was the fear of expressing their feelings to their peers. They probably felt that the “bad guards” were the leaders due to their behavior of cruelty towards the prisoners and although they felt it was wrong, they did not want to be the “outcast” by objecting the orders and risking being excluded from the group. Since the violent treatment and abuse was not directed towards them, it was easier to stand beside the rest of the guards and ignore the situation rather than opposing.

The guards and prisoners fell into their roles very easily, more than Zimbardo was expecting. Although this was a simulation, the prison turned very real for the students two days in. The guards where given a role of power and although they were not allowed to use physical force, they managed to use other abusive ways to control and humiliate the prisoners. The guards were not given boundaries so they used and abused their power, some exhibiting “genuine sadistic tendencies” as described by the experimenter. The prisoners, although it took a while for them to take the roles seriously, became emotionally traumatized with the guards’ treatments. They were obliged to obey the guards’ authority and rules, and soon accepted their evil behaviors from. Knowing that this was an experiment and a simulation, with a limited time period with an assigned role, I would probably fall easily into it but not as intensely as some did.

The guard brutality evolved with the context. All students were selected on the same ground and were randomly assigned the guard and prisoner roles. However, one can say the “bad guards” behavior maybe had a touch of their own personal character that was emphasized with the feeling of power and leadership. Since they were not given boundaries for their authority, they used it becoming even too evil. This received heavy criticism since there was insufficient data about the students and their behavior, and the influence or lack thereof of the experiment.

There is a core to our-self identity independent of how others define us. It can be difficult to remake oneself into a new identity but it is possible, in certain situations, to adapt. This experiment is a good example of the reconstitution of new identities on the students. They were given roles and with time, they started to take it too seriously and attaching these personalities to their identity. Part of this new “personality” was developed through the uniforms given and that was a subliminal message for all participants of their “new identities” in the prison.

After the study, the prisoners and guards went back to their normal lives and environment. As those students saw each other with the same civilian clothes, there was probably embarrassment about the whole the situation. The guards are likely to have experienced a feeling of guilt for having used verbal and physical harassment towards the prisoners who actually were civilized students as them. The prisoners may have looked in retrospective and felt humiliated for losing their own identity and allowing the guards to have such an influence on their behavior, leading them to an emotional trauma or resentment. After the experiment took place, the area of “the prison”, reconverted to a basement laboratory hallway, must have caused a sense of confusion and disorientation as what was now a class space had been their “prison” before. The perception they had of this place can hardly be changed due to the memories and events they experienced, even if it shows no evidence of its previous (fabricated) purpose.

This type of situation can be compared to the way employees are treated or treat each other. If an employer mistreated me, or I mistreated an employee and meet that person again in non-business scenery, I would probably feel embarrassed and awkward with the situation, and I would not attribute the same value it had in the business context.

If I were the experimenter in charge I would have probably done this study but with more data about the students and avoid participating in the experiment in such an active role as Zimbardo did. I would let it continue the full two weeks but have more control over the situation. There would be some limit use of the guard’s power over the prisoners to avoid a deep psychological effect. After the study, I would do a follow-up of all the students and check their psychological status and emotion instead of just collecting information about their experience. I believe that the main problem with the experiment is that all reactions escalated too fast, motivated by the wish of obtaining a productive analyses but, in this case, at the cost of people’s performance.

This experiment shows the corrosive effect that prison situations have on human nature and this can be compared to the business world. People are trapped in this world of power, money and competition, some with no evident way out.

Those with higher positions can be compared to the guards. They have the power to dictate and give orders to employees (the prisoners). Since employees need the job, they accept the certain rules and behavior of their superiors. The prisoners also have no choice but to accept the guards’ harassments since they are imprisoned. This gives space for the superiors (and guards) to use coercive power towards the employees (or prisoners). This shows how the corporate world can be like a prison. Employees sometimes have to deal with the fact that to reach a specific goal, they have to go through “the tough road” and complete the “sentence” given, and that gives a sense of power and authority to those in a higher hierarchical position. 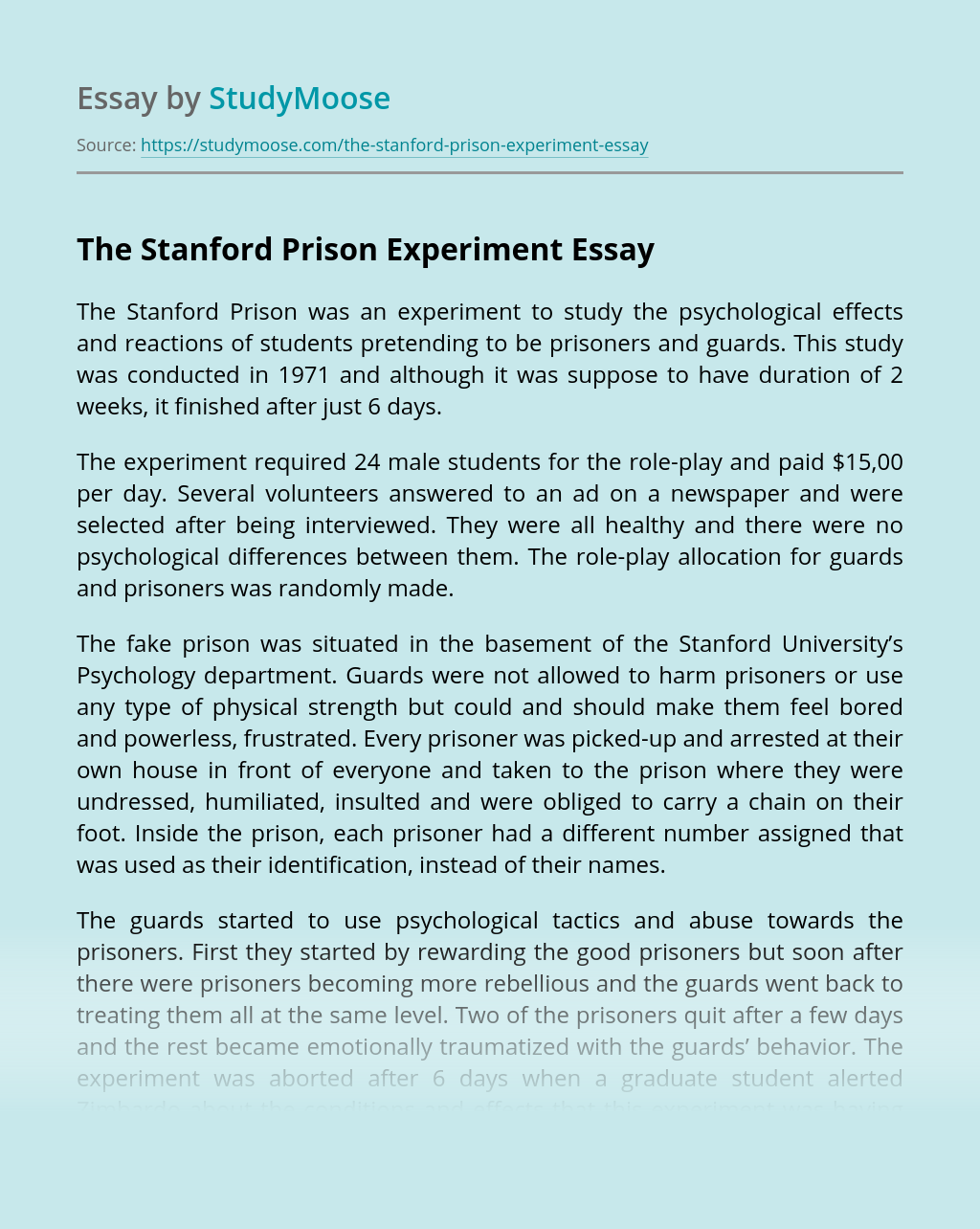