The Prison System in Our Society

How can the prison system rehabilitate prisoners so that they will enter the society as equals?

Prison inmates, are some of the most “maladjusted” people in society. Most of the inmates have had too little discipline or too much, come from broken homes, and have no self-esteem. They are very insecure and are “at war with themselves as well as with society” (Szumski, 1985). Most inmates did not learn moral values or learn to follow everyday norms. Also, when most lawbreakers are labeled criminals they enter the phase of secondary deviance.

They will admit they are criminals or believe it when they enter the phase of secondary deviance (Doob, 1994). In the end, most inmates find themselves behind bars or abusing drugs and/or alcohol within 3 years of being released (Ripley, 2003).

Some believe that if we want to rehabilitate criminals we must do more than just send them to prison. For instance, we could give them a chance to acquire job skills; which will improve the chances that inmates will become productive citizens upon release.

The programs must aim to change those who want to change. It was seen in the case of Jean Sanders that it is hard to stay off drugs and away from the lifestyle you lead. “Like most who leave prison, he will be returning to the scene of his crimes” (Ripley, 2003). Those who are taught to produce useful goods and to be productive are “likely to develop the self-esteem essential to a normal, integrated personality” (Szumski, 1985). This kind of program would provide skills and habits and “replace the sense of hopelessness” that many inmates have (Szumski, 1985).

Moreover, another technique used to rehabilitate criminals is counseling. There are two types of counseling in general, individual and group counseling. Individual counseling is much more costly than group counseling. The aim of group counseling is to develop positive peer pressure that will influence its members. One idea in many sociology texts is that group problem-solving has definite advantages over individual problem-solving. The idea is that a wider variety of solutions can be derived by drawing from the experience of several people with different backgrounds. Also one individual’s problem might have already been solved by another group member and can be suggested. Often if a peer proposes a solution it carries more weight than if the counselor were to suggest it (Bennett, 1978).

Further, in sociology, one of the major theories of delinquency is differential association. This means some people learned their ways from “undesirable” people who they were forced to be in association with and that this association “warps” their thinking and social attitudes. “Group counseling, group interaction, and other kinds of group activities can provide a corrective, positive experience that might help to offset the earlier delinquent association” (Bennett, 1978). However, it is said that group counseling can do little to destroy the power of labeling (Bennett, 1978). The differential-association theory emphasizes that a person is more likely to become a criminal if the people who have the greatest influence upon them are criminals (Doob, 1994).

Most of today’s correctional institutions lack the ability and programs to rehabilitate the criminals of America. One can predict that a prisoner held for two, four, eight or ten years, then released, still with no education or vocational skills will likely return to a life of crime. Often their life in crime will resume in weeks after their release. Although the best prisons and programs in the world will not cure the problem totally, improvements still must be made (Szumski, 1985). Also, being released from prison gives the former inmates a disadvantage compared to others. For instance, members of the group might not be as open or show emotion because they want to appear “tough.” Also the members might not express their opinions openly because the others might see it as “snitching.” For the group to work it takes a dedicated counselor (Bennett, 1978).

Some believe that a way to stop crime is to punish criminals much more. This was contradicted by what Mr. Resko stated. “Punishment did nothing for the felon except make him warier, more cunning, and more inclined to violence. Punishment was not the answer to the financial and moral problems generated by the increasing number of prisons and prisoners. Punishment, whether it is corporal, psychological or moral…is not the answer. Not for the con or for his respectable brother.” (Schneider, 1996)

To do an experiment on this hypothesis, we must do a longitudinal study. Inmates must be studied from the time they enter the prison system till approximately 5 or 10 years after they are released. To find the right candidates, a survey must be given and those who are as similar to each other as possible will be the people studied. Questions in reference to background (religion, manners, schooling, first time committing a crime, etc.), crime committed, age, sex, sexual preference, and hobbies will be asked on the questionnaire to identify similarities and differences. Background is extremely important because it is what made this person who he is today.

Also, it is what identifies a person most. The crime committed should be the same one so that we do not see the progress of murderers compared to people that committed a white-collar crime. Age is relevant because it the younger you are the easier influenced you are. Sex is important because we must study one group and sexual preference because difference in appearance as well as lifestyle is easily seen. Hobbies are a very important factor because it is said that a person that has hobbies can overcome an ordeal easier then a person without.

Questions for the survey will include the following:

The people that the experiment should be conducted on will be a very narrow group of people. Ones with the same interests and background. However, the experiment should be conducted many times so that the researchers can see the different outcomes for different groups of people and maybe find out why or even better, how can we help everyone. The first group of people that should be tested on is young adults, ages 21 to 30, which are also first time offenders. This age group is easier influenced then a group of older people since the younger you are, the easier it is to lead you in a certain way. They should be first time offenders because I believe that you should deal with people that are easiest to deal with first and second or even third time offenders have not learned their lessons already so it will be harder to rehabilitate them.

My belief on this study is that prisoners that get educated will have an easier transition then prisoners that were not educated and where still rehabilitated the same way the prison system works now. A prisoner that is educated in prison and is informed about all the new activities will enter the society like he is at home and is equal, however, a prisoner that was not kept up to date and wasn’t educated will have a harder time fitting in and will see himself as well as be seen inferior to those that were not in prison. The world is still based on survival of the fittest and one must have brain and brawn to survive and even to be identified. Prisoners that are on the same level of intelligence as they were when they entered the prison system will have a great disadvantage over those that have been schooled and shaped. However, those that were schooled while they were in prison will have a slight disadvantage only because they have a record.

In conclusion, things need to be done to improve rehabilitation in America. Improvements in job training, counseling, and halfway houses for rehabilitation must be brought to the forefront by citizens. If we do not get involved and try to make changes, our crime problem could worsen beyond control. This is a very important thing to study since the Bureau of Justice Statistics states that we have more than 1 million prisoners in the United States and the number is climbing daily. Those that get released must have a place in society and since mostly all of inmates that get released commit a crime within a few weeks after being let out and go back to prison within 3 years of being released, therefore making it seem as though people that get released don’t seem to fit in. We must educate them so that when released they can have a normal job and a normal life, one that stays away from prison and away from breaking the law.

The Prison System in Our Society. (2016, Jun 23). Retrieved from http://studymoose.com/the-prison-system-in-our-society-essay 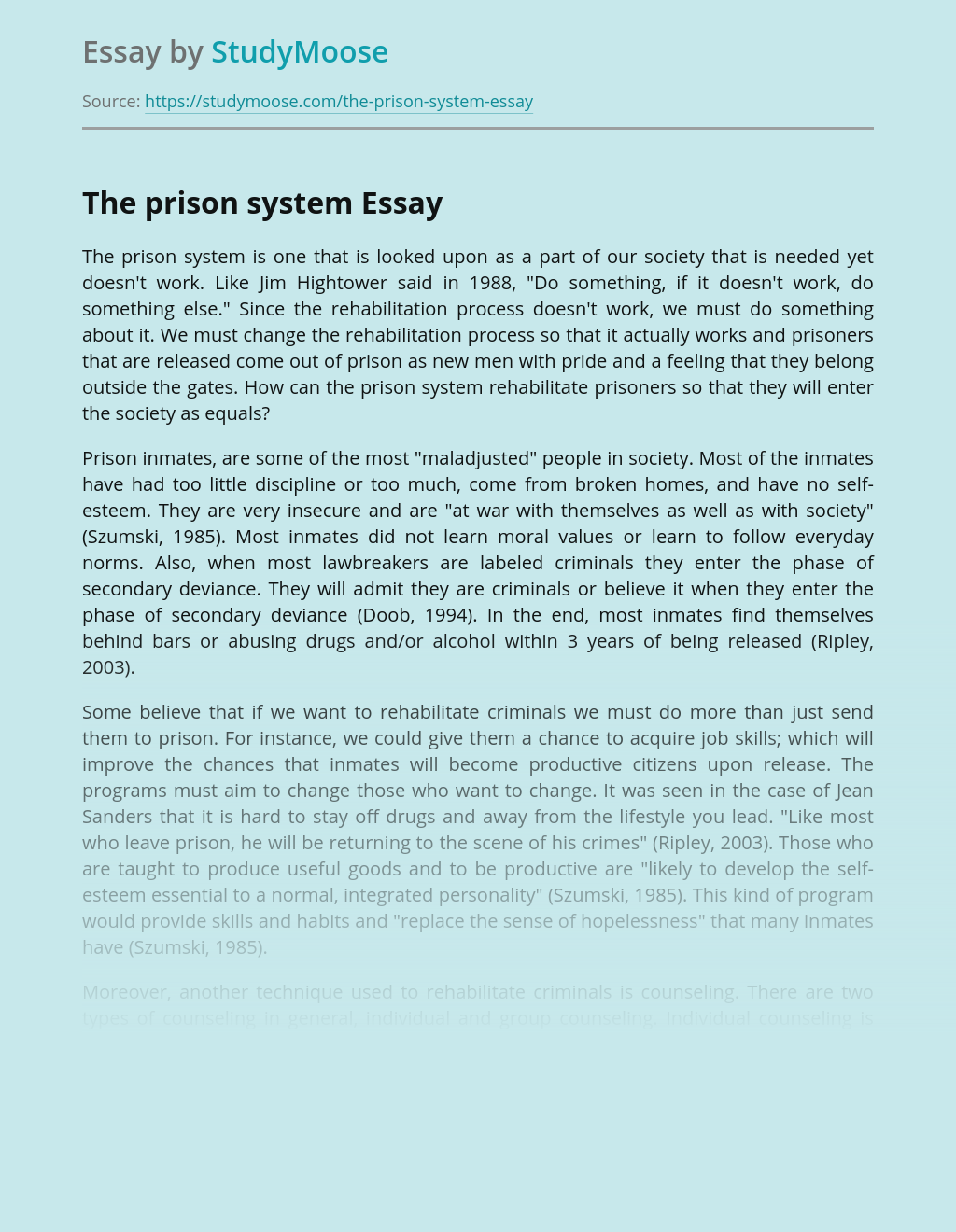 Don’t waste time
Get a verified writer to help you with The Prison System in Our Society
Hire verified writer
$35.80 for a 2-page paper
Stay Safe, Stay Original