In summary the studies showed that the behavior of the ‘normal’ students who had been randomly allocated to each condition, was affected by the role they had been assigned, to the extent that they seemed to believe in their allocated positions. The studies therefore reject the dispositional hypothesis. The Stanford Prison Experiment demonstrates the powerful role that the situation can play in human behavior. Because the guards were placed in a position of power, they began to behave in ways they would not normally act in their everyday lives or in other situations.

Don't use plagiarized sources. Get your custom essay on
“ The Stanford Prison and BBC Prison Experiments Comparison ”
Get custom paper
NEW! smart matching with writer

The prisoners, placed in a situation where they had no real control, became passive and depressed.. Zimbardo believed that the behavior in prisons could be best explained using a situational attribution. In particular he believed that the conditions were influenced by the social roles that prisoners and prisoner guards are expected to play. However there were individual differences in styles of coping with this novel experience. Half of the prisoners endured the oppressive atmosphere, and not all the guards resorted to hostility, some guards were tough but fair, while some went far beyond their roles to engage in creative cruelty and harassment.

The BBC study showed that there is a world of deference between someone imposing a group role upon you, and you seeing yourself in terms of that role. The findings of the study were very different from those of the Stanford Prison Experiment. Specifically, (a) there was no evidence of guards conforming ‘naturally’ to the role, and (b) in response to manipulations that served to increase a sense of shared identity amongst the prisoners, over time, they demonstrated increased resistance to the guards’ regime.

I think The BBC Study is more creditable than the Stanford Prison Experiment, simply because of the new teqneques and precautions that were used. the prison was built like a real prison with no windows and isolated from the outside world.

The guards had a full survailance on the prisoners, they could monitor the prisoners in their cells by screens. The guards had an exercise area, a comfortable bed rooms with good quality beds, the researchers provided a real prison atmosphere. therefore I think it’s more reliable and creditable. We all play many roles in society and these social roles do to some extent shape our identity. 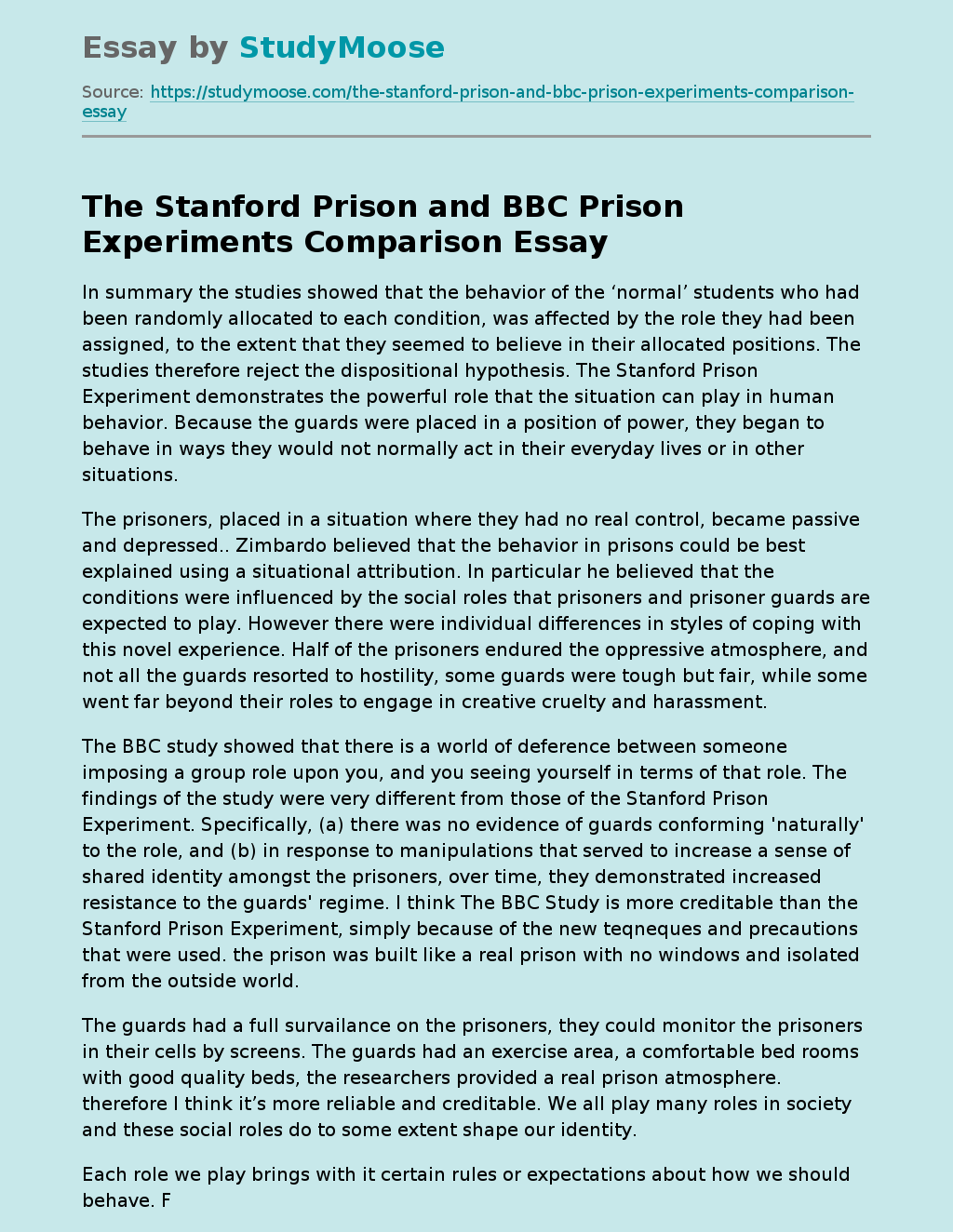