Steve Job’s 2005 Stanford Commencement Address left a moving impact on his audience. A crowd of thousands filled with recent college graduates, their families, educators, and current college students who left the stadium with a new motivation to achieve their dreams. Steve Jobs was an inventor, designer, and entrepreneur. He co-founded Apple and started Pixar animations. He was born in San Francisco in 1955 to two college students who would give Steve up for adoption. Steve would eventually be adopted by his parents Paul and Clara Jobs.

Steve’s father, Paul, “encouraged him to experiment with electronics in their garage, which led to a lifelong interest in electronics and design.”

On June 12, 2005 Jobs stood in front of the 114th graduating class at Stanford University and delivered a speech that would initiate the beginning of their next stage in life. The audience expressed excitement and eagerness to graduate and pursue their careers, and to have Steve Jobs there, made it all the more real and heartening.

All seated in Stanford Stadium, thousands of people eager to hear what the American visionary has to say. The California weather hugs around the stadium and warms the people in the stands. The audience cheers and laughs as Jobs proceeds through his speech. In the crowd, there are people of all ages and color; men, women and children. Younger brothers and sisters who are watching their older siblings achieve a milestone and wanting to be just like them. The audience, specifically the college graduates listen to Jobs like his words are gold and they hang on to each word.

The audience views Jobs as someone they can relate to. Someone who, like many teenagers, didn’t know what they wanted to do with their lives. Someone who went through many struggles and downfalls and uncertainty. Someone who while giving this speech is struggling with the remission of pancreatic cancer, but still has an energy to invoke greatness in his audience. I chose to observe this speech for it’s relatability to me currently in my life. I will be graduating in the next two years and I need moments of inspiration whenever I can get them.

Jobs starts off his address with a joke about this moment being the closest he’s ever gotten to a college graduation. He tells his audience that he will share three stories. He will go in chronological order starting at his birth. His first story he says is about “connecting the dots.” He shares how his birth parents couldn’t take care of him and his first potential adoptive parents wanted a girl instead. Finally, his parents adopted him and promised his biological parents that one day Steve would go to college. Jobs explains how college wasn’t for him so he dropped out and looking back it was one of the best decisions he has ever made. This statement is ironic since he is speaking to a crowd of college graduates who have probably felt like Jobs did and soon will have to pay the huge amounts of money they owe. However, Jobs explains how he now had the opportunity to look into the classes that interested him, like calligraphy class. He explains how the classes he took a chance on would be the most helpful to Jobs later on in his life. That calligraphy class would provide the future Mac computer with beautiful typography. Jobs ends his first story by delivering his meaning behind it. He explains how, “you can’t connect the dots looking forward; you can only connect them looking backwards.” Jobs wants his audience to know that they must, “trust in something.” Jobs states that his belief in trust has, “made all the difference in his life.” In Jobs first story he appeals to the audience’s ambitions and sometimes hesitations and fears, but he offers them hope. His second story, Jobs explains, is about love and loss. Jobs states how he and his friend Woz started Apple in Job’s parents’ garage. Showing his audience that big things sometimes have small origins. He continues by sharing that he got fired from a company he started, which shows his audience that even when you’re at the top, you can fall. However, from this failure sprung new ideas and one of my favorite Jobs’ quotes. “The heaviness of being successful was replaced by the lightness of being a beginner again, less sure about everything.” Jobs goes on to explain how sometimes life, “hits you in the head with a brick,” but you can’t lose faith. Jobs went from being fired to starting the most successful animation studio in the world. Jobs gives a call to action to his audience. He wants them to find what they love, because that’s the only way to do great work. He appeals to the audience’s emotions and their will to keep striving for what they want. His final story is about death. This part of Jobs’ speech invokes thoughts of existentialism and deeper meanings. Jobs explains how reminding himself of his mortality has been the most helpful tool for him in making the best decisions. He elaborates to his audience that death is something we all have in common, and death reminds us that, “there is no reason not to follow your heart.” Jobs shares his journey with being diagnosed with pancreatic cancer. At the time of his speech, Jobs was in remission, and had a new outlook on life and death. He calls death the “single best invention of Life.” Jobs advises the audience to stop wasting their lives not doing what they want to do. He appeals to the audience’s own personal obstacles and encourages them to not give up.

Jobs’ wife, Laurene, shared later in the book Becoming Steve Jobs, how nervous Jobs was the morning before the Stanford address. She explains how important the speech was to Jobs and how often he practiced his delivery. During his speech, Jobs seemed nervous, often reading off his note cards and only looking up on the last word of each sentence. However, regardless of his lack of physical confidence, his words carried him and made his presence known. A speech which only lasted around 15 minutes, was the perfect amount of time to inspire the thousands in the crowd. His nervousness made him appear humble and more human and relatable. Jobs wore jeans and sandals under his robe, proving to his audience that he remains a down to earth person, who remembers where he came from and where he’s been. He showed his playful and child-like personality but also his deep and intellectual side. Jobs made more eye contact with his audience when he discussed topics that really matter to him. When he brings up his family, the work that he loves, and his close experience with death. Jobs looks into the audience and creates a personal moment between him and the crowd. Jobs, though nervous, had a lightness about him and showed a relaxed stature which made his audience feel comfortable, as if they were listening to a mentor or friend.

Effectiveness of the Speech

Steve Jobs’ Stanford commencement address has over thirty million views on Youtube. His inspiring words extended past the thousands in the Stanford Stadium and has reached millions of people. His story touched the hearts and minds of people who have struggled in pursuing their dreams. Throughout the speech, the reactions from the audience proves why Steve Jobs is an inspirational speaker. The educators behind him smile in approval. The college graduates watch Jobs with adoration on their faces. Tears of happiness and excitement flood the stadium. Jobs a probable hero and role model to the students in the crowd hear their icon tell them to not give up on their dreams. Jobs shares invaluable lessons he has learned throughout his life. He calls his audience to action in three short stories. First, he states how you cannot lose faith and you must, “trust that the dots will somehow connect in your future.” Second, Jobs tells his audience to make sure you do what you love, then nothing can go wrong. Third, Jobs advises his audience to not waste their time “living someone else’s life,” and to not be afraid to keep trying. Steve Jobs’ commencement address, to this day, continues to be one of the most inspiring speeches of all time, especially for the ones who are committed to their dreams. 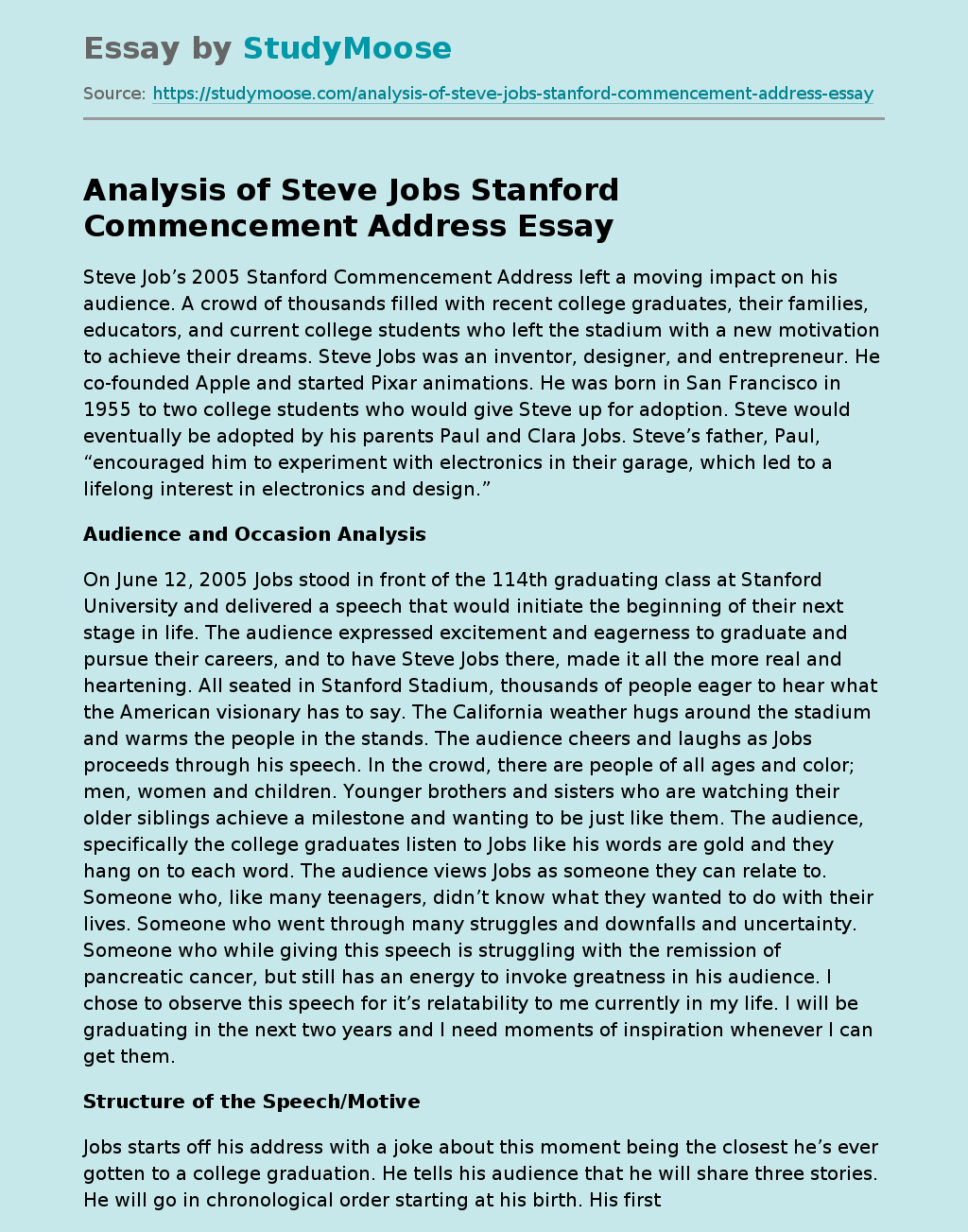