The organization Apple Inc. has a flat hierarchy with six levels. This makes it possible for the CEO and the Board of Directors to have a larger overview of the company. The departments at Apple Inc. are functionally grouped. Some (e.g. Global Communication) are then grouped geographically. The organization is divided into specialized departments or teams, who all report to a team leader. All team leaders then meet with the CEO to discuss matters. Within theses teams are people who the CEO trusts to do their part.

Don't use plagiarized sources. Get your custom essay on
“ Steve Jobs Leadership at Apple ”
Get custom paper
NEW! smart matching with writer

This means the CEO has a quite narrow span of control, as he does not have the responsibility for all departments, but he has selective influence on them. On a daily basis, Jobs had direct contact with about 50 people, out of the about 10.000 working at Apple Inc.

For the organization to run as smoothly as possible, Jobs let those of a higher status (“A-players”) have a lower formalization, as he feared that if he did not let these very qualified people do their job, they would leave the company.

Those of a lower status have higher formalization, as Steve has little trust in them. At the same time, it can be said that the organization has a centralized structure, as for instance, no product is ever released without it being approved by the CEO. In many situations though, decisions have to be made without his approval. A reason for this can be found in the wise words “No brain can effectively control more than 6-7 other brains” (General Sir Iain Hamilton) Who is Steve Jobs as a Leader?

It is interesting to discuss whether Steve Jobs can be defined as a leader, or if he is in fact “just” a manager.

Leaders can be said to be visionaries who drive new initiatives, which makes them likely to take risks. They seek to create positive or dramatic change. Managers on the other hand seek to achieve stability and predictability. It cannot be denied that Jobs has never hesitated to take a risk with his ideas and products, which would therefore make him a leader. “Managers do things right, leaders do the right thing” is another perception of the two terms.

With undeniable success, Jobs has definitely done things right, which would make him a manager. Of course, there has been failure on his road to success, but if we take the firing from Apple (1998) as an example, his comeback only made him seem even more important in his role as CEO of the company. It is difficult to define him as one or the other. According to Mintzberg, management and leadership overlap. However, although most CEO’s must be a manager, not all posses the traits of a leader. The leadership ability to inspire is not easily acquired, and it was perhaps this trait, which made him not only a manager, but also an exceptional leader.

Besides his inspirational qualities, there are other personality traits that define him as a leader. Through his commencement speech at the Stanford University graduation, he made use of his great rhetorical skills and charisma. According to Cannel (2008) typical traits of good leaders include ability to inspire and listening, sharing and delegating skills, and these boxes can therefore be checked off. In addition to this, an appealing trait is technical or professional knowledge and competence in a particular field. Jobs had an ability to connect art and technology, which led to e.g. the iPod. Taking the traits above into consideration, Jobs can be defined as what we call a Transformational leader, which is a term in new leadership. A such leader is typically charismatic, inspiring and motivates others to perform “beyond their contract”.

According to Tichy and Devanna (1986) Transformational leaders have three main roles: Recognizing the need for revitalization
Creating a new vision
Institutionalizing change

Jobs fulfils all three roles, as he had the ability to figure out what customers wanted, before they knew they wanted it. The creation of the iPod was on of the first examples of this. The iPhone and iPad kept Apple competitive on the market. Jobs has always been very involved in these inventions and has always aimed for the highest possible standards in his products. His way of incorporating art into technology, is what made the products of Apple unique and competitive. Examples of new ideas are the white iPods, Macs etc. and touch-screens. Even though other brands have attempted to use the same, it has now become a part of the Apple brand.

The concept of New Transformational Superleader combines the ultimate traits of a leader in the 20th century. Such leaders must be in possession of specific traits, style-counselling and a context-fitting leadership.

In the first category is appearance. In relation to this, it is interesting to notice that Steve Jobs always dresses in a black turtleneck, round glasses, jeans and sneakers. This characteristic outfit has become a symbol of his personality as it reflects his characteristic style. (Steve Jobs, p. 411 Walter Isaacson 2011) In the style-counselling category we again find that inspirational and visionary qualities together with risk-taking is valued. In an interview with ABC news, his former partner Steve Wozniak explained how Jobs was never afraid to take a chance on what he believed in, and he deliberates on the meaning of Jobs’ quote in the Stanford university commencement speech “Stay hungry, stay foolish”:

“Like his other words (…) “follow your dreams, follow your internal passion, what’s in your heart, believe in yourself even when a lot of people are saying “No, this is not right, it’s not going to be worth anything, it’s not going to go anywhere, you’re off the right track,” and that’s very important.”

Last we find the context-fitting category. Jobs is a very situational leader. As the world changes the products need to change too. An example of his context-fitting style was the personalization of the computer or the invention of the iPod. He did not invent these, but his creations so fundamentally changed the market, he might as well have. Today, many people do not have mp3 players, they have iPods, and so he created a whole new concept for a whole new time. Again, Jobs’ way of seeing what people wanted before they knew they wanted it, paved the way for great success on a new market. Later on, as the iPod almost became a necessity, and smartphones became popular, Jobs again fitted his products with the situation and found a way to combine the iPod, the computer (Mac/iOS) and the smartphone into one – the iPhone.

The future of Apple Inc.

The death of Steve Jobs had great impact on the organization of Apple. Having identified what made him so successful as a leader, it has become obvious that the new CEO has much to live up to. The stocks of Apple fell the day Jobs died, which provokes the idea that people connect Jobs’ death with Apple Inc.’s failure. (See attachment 1) It has come to show that people have dreaded what will now happen to Apple.

There is a fear that Cook lacks the creativity and innovativeness that Jobs possessed. When the iPhone 4s came out instead of an iPhone 5, it cannot be denied that many were disappointed. Even though Jobs was in on the development of the 4s, it was Cook who presented it to the world, and so many have linked this ‘lack of renewal’ with Cook. Cook has yet to prove to Apple customers that he too has the required skills to be as successful as Jobs. Even though people may have doubts about Jobs’ successor, he has in fact done a lot to make Cook as capable as himself:

“We’ve got really capable people at Apple. I made Tim [Cook] COO and gave him the Mac division and he’s done brilliantly. I mean, some people say, ‘Oh, God, if [Jobs] got run over by a bus, Apple would be in trouble.’ And, you know, I think it wouldn’t be a party, but there are really capable people at Apple. And the board would have some good choices about who to pick as CEO. My job is to make the whole executive team good enough to be successors, so that’s what I try to do.”

Tim Cook may be a capable CEO, but he has yet to prove his creative skills. He was a perfectionist and may have had more passion for his products than Cook has. A great leader should always leave behind a company, which is independent of them, and will flourish without them. When Jobs was fired in 1985 the company proved to be dependent on him, and it most likely would have gone bankrupt, had he not been rehired. The last time Jobs ‘left Apple’ it all went downhill… will it happen again? Conclusion

In conclusion, the organization of Apple has a flat structure, which gives the CEO a possibility for a high level of involvement, while delegating responsibilities to teams he trusts to do their part. Steve Jobs has personally contributed a great deal to the success of Apple with his creativity and innovative mind. As a leader he has made the organisation very functional by attempting to create an independent company, but still staying as involved as possible.

He can be defined as a New Transformational Superleader, who is an inspirational person with the anility to motivate followers to higher levels of achievement and at the same time lead others to lead themselves. His ability to know what customers want before they know it themselves has transformed Apple from a minor computer company to a worldwide brand. His role in the creation of unique products was big, and as a front figure of the company the success of Apple has been linked to him, and made him a memorable leader, who will very likely go down in history. The future of Apple is yet to be defined, but if his successor possesses some of the same qualities as himself, it is likely that the success of Apple will continue for many years to come.

Jobs on whether Apple could live without him: http://money.cnn.com/galleries/2008/fortune/0803/gallery.jobsqna.fortune/5.html

The biography of Steve Jobs: http://allaboutstevejobs.com/bio/short/short.html :

Steve Jobs as a leader: http://abcnews.go.com/GMA/video/steve-jobs-proudest-achievement-14801246

Steve Jobs Leadership at Apple. (2016, May 10). Retrieved from https://studymoose.com/re-steve-jobs-leadership-at-apple-essay 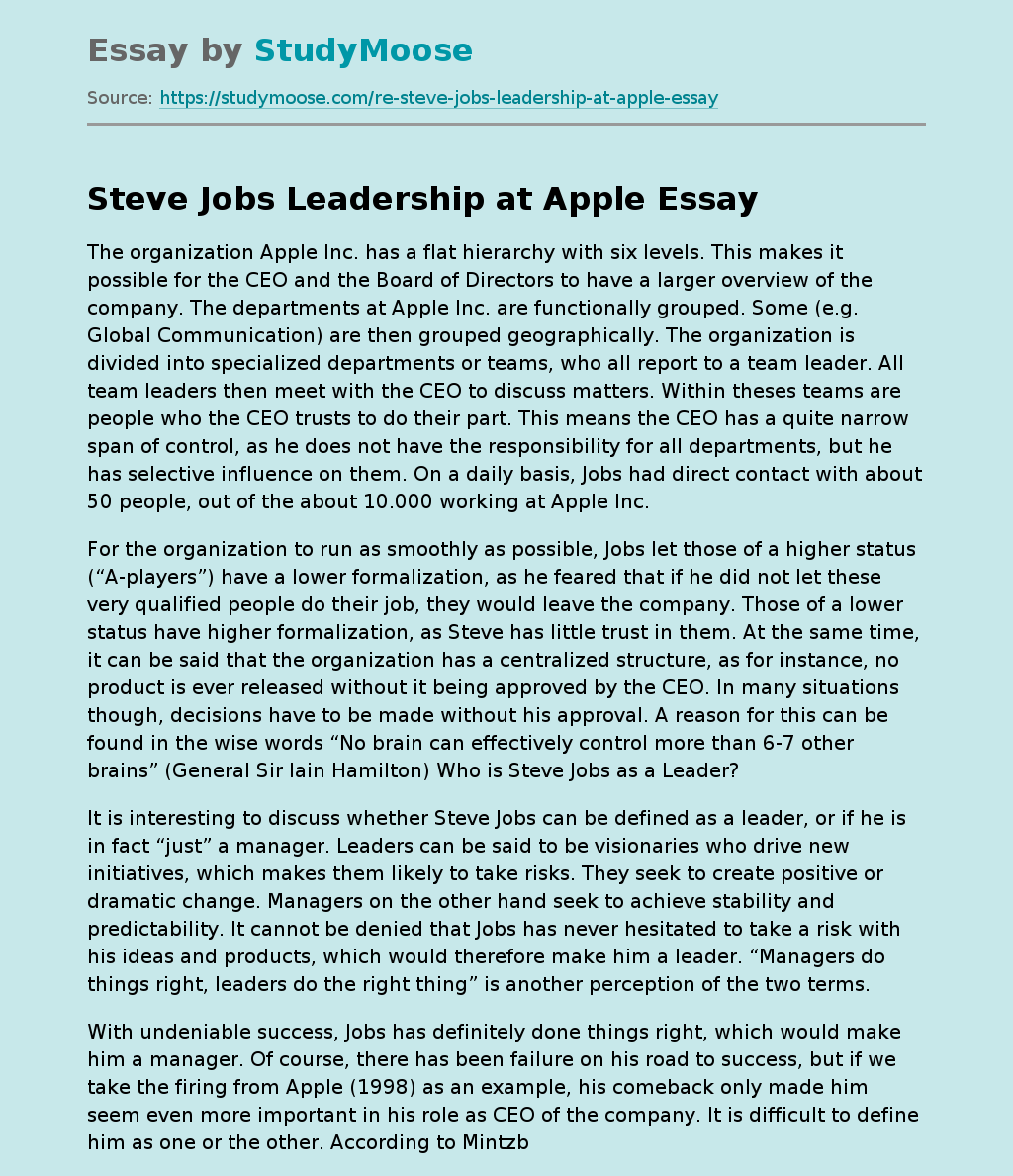