The man who went from sleeping on the floor to the man who revolutionized technology for the future. Steve jobs is truly an inspiration and a role model to not only myself but to many other people in the world. I strongly believe that all texts are reflective of the composer’s knowledge and understanding that is influenced by past experiences that shape our views and values. This is clearly conveyed through the speech that Steve Jobs gave at Stanford University.

Don't use plagiarized sources. Get your custom essay on
“ Steve Jobs’ speech ”
Get custom paper
NEW! smart matching with writer

Jobs chose to share a very personal part of his life with the world in a very genuine way that inspired graduates by informing students about his past experiences to peruse their passion. Jobs breaks it down into three stories that are unique to his own personal experience. the first is about connecting the dots, the second is about love and loss, and his third story is about death. but what he really wants the audience to see is that his life went okay, and then things took a wrong turn, and then everything began to brighten up and get a lot better.

Things were better than he ever would have imagined.

Throughout the speech Jobs effectively connects with the audience while engaging in logos by discussing his logic of saving money and dropping out of college, elaborating with ethos by telling personal stories, and using pathos when discussing failure. He conveys this message with the use of personal anecdotes referenced in the quote “I didn’t have a dorm room, so I slept on the floor in friends’ rooms, I returned coke bottles for the deposits to buy food with, and I would walk the 7 miles across town every Sunday night to get one good meal a week at the Hare Krishna temple.

” Hence his personal experiences of being a young man who was unsure of what he wanted to do with his life and found himself sleeping somewhere other than a place of his own. This allows the audience to relate and draw a connection. Furthermore, he utilizes a rhetorical question in the quote “so why did I drop out?” to lead himself into the story and to catch the reader’s attention. As a result, he creates a connection with the audience by referring to his life, where the founder of one of the greatest companies in the world started from humble beginnings, allowing the audience to feel a sense of hope for the future.

In a similar manner, jobs successfully depict the correlation of his speech and his life by discussing his second story in his speech that dealt with love and loss. Steve Jobs had gotten fired from the very company he started, Apple! However, he also said “…getting fired from Apple was the best thing that could have ever happened to me. The heaviness of being successful was replaced by the lightness of being a beginner again…”. He state’s that getting fired was the best thing that ever happened to him, because it was during that time that he started a company called NeXT, and another popular company called Pixar. Apple bought NeXT, and that is what brought Steve Job’s back to Apple. The use of contrast in this context allows the audience to feel inspired as he never gave up from failure and learned from his mistakes that benefitted him in the future. He refers to this in the quote “It was awful tasting medicine, but I guess the patient needed it” the metaphor further allows the audience to understand the impact of his failure and how its breaded success. Nothing is impossible.

Furthermore, the founder of apple mentions his third and final story that talks about death and how an individual should manage and give importance to life. Life, work with a combination of love, and death. Three different stories with one purpose. To teach a lesson. Everything happens for a reason. Life goes on. ‘My third story is about death.’ The use of logos shows his simple, simple, elegant, and quite frankly to the point. As a result, his short and simple way of speaking portrays honesty. In a similar manner, having experienced such a traumatic thing in his life it recreated his personal status on it. Being diagnosed with cancer and seeing his life change right before his eyes made him change his life around him. ‘Even people who want to go to heaven do not want to die in order to get there. And yet death is the destination we all share.’ He uses metaphor to indicates the impact of death and how it changed his life and opened an entirely different perspective of the world. Therefore, Steve jobs trigger feelings of sympathy from the audience by reflecting on his life, context and values in his speech.

In conclusion, Jobs’ speech makes multiple connections with the audience. Jobs’ speech discusses three intimate stories and failure while through simplistic words. Jobs chose to discuss failure to ensure that there are positive outcomes after failing. Steve jobs connected with his audience while engaging in logos by discussing his logic of saving money and dropping out of college, elaborating with ethos by telling personal stories, and using pathos when discussing failure. As a result, Jobs’ three stories are unique to his own personal experience that discusses connecting the dots, love and loss, and death. 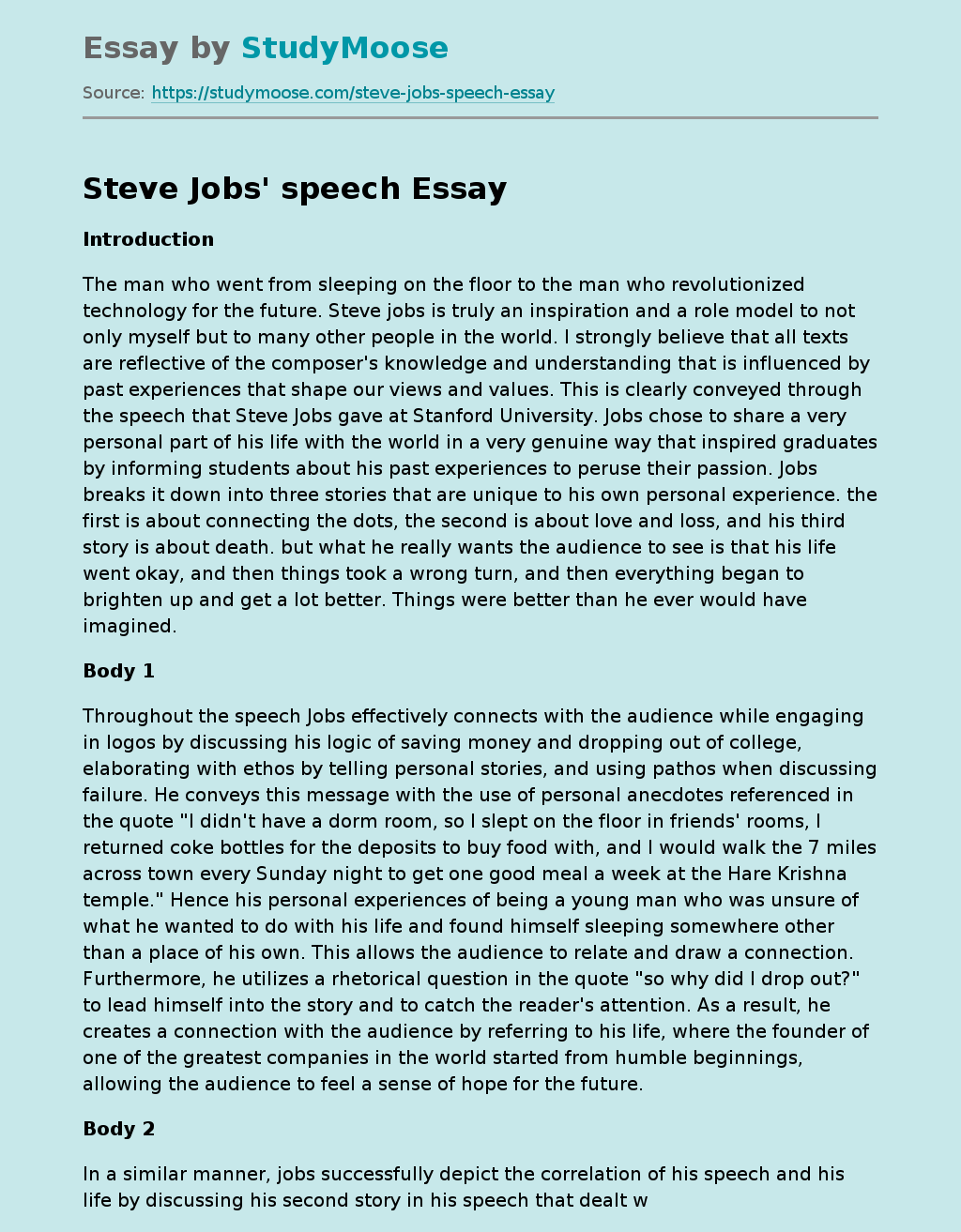