“ There are three apples important in this world, Adam’s apple, Newton’s apple and Steve’s apple”. This was one of the lines quoted by Steve Jobs in one of his speeches, which signified the level of confidence and faith he had in his work. The only way to be satisfied is to do great work, which can be attained only by loving your own work. This was the main idea of his commencement speech in Stanford University. He was a born hero as even after going through serious difficulties in his career life, he still had that faith and confidence in himself, which made him the CEO of a two billion dollar company.

He dropped out from college at the age of twenty, which was one of the best things that ever happened to him. He could indulge himself in the activities that attracted him so he learned calligraphy and ten years later used this creativity in designing his first Macintosh computer.

By the end of his speech in the Stanford University he stated “Stay Hungry, Stay Foolish. ” As far as my opinion is concerned, I believe that by this line he meant that however successful a person becomes in life, he/she should never be proud of themselves and should try and grasp as much knowledge as they can.

In a way he even meant that being the richest man in the cemetery is not another name for being successful, rather being knowledgeable is something that matters more.

We should never be satisfied with our knowledge as the world is very big and our brain is too small to be aware of everything. Staying hungry meant that we should always be looking for more and more whereas staying foolish meant that we should never try to make people believe that we know everything. Be calm and let people think whatever they want to, as showing off our knowledge would do us no good.

Success and failure, both depend on the work you do and doing what you love will bring nothing but success. Another idea that Steve mentioned in his speech was regarding finding your own love. Never be satisfied until you are doing what you are interested in. There can be nothing worse than being kicked out of one’s own company. Rather than being depressed or giving up, Steve still loved what he did, which made him continue his work in the same field. He started two companies named Next and Pixar and one of them (Next) was brought by apple.

This way Steve returned to apple and the technology he developed at Next is at the heart of Apple’s current renaissance. Even after having made his mark in life he is still hungry and wants to stay foolish. Considering my personal opinion towards his idea,. I totally agree with his words on success or failure, as both depend on our own deeds. We should always be in search of what we love to do and in order to do so we should be able to figure out our field of interest.

We would be surrounded by a lot of choices but picking the right one amongst all is something, which makes the real difference and is also the most important step towards our goal . Staying hungry and foolish at the same time would lead to a better choice of work. Steve’s quotes and sayings on success and failure are something, which cannot be doubted upon, as he is someone who having reached such a great stage of life always remained down to earth and followed the policy of “Stay Hungry, Stay Foolish. ” 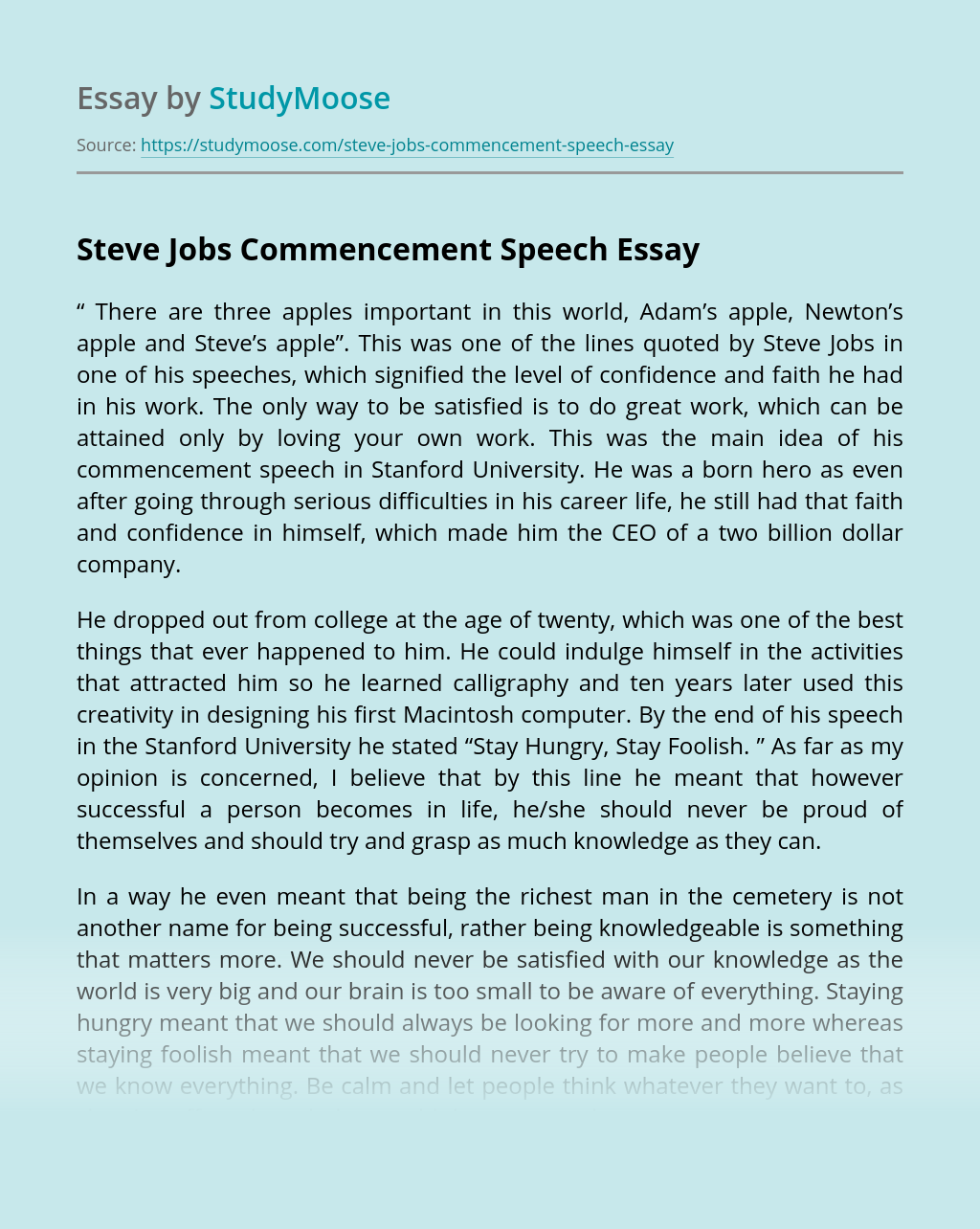