Throughout history many fundamental courses of action were forced to occur after a powerful word said by an influential person, in a form of a speech. One of these speeches is the Commencement speech of the co-founder of Apple Computer and CEO of Pixar Studios Steve Jobs. In his speech Jobs uses personal stories combined with the rhetorical appeals ethos, pathos, and logos in order to successfully persuade the graduates to do what they sincerely love and have courage.

Jobs starts his speech with a confession “I never graduated from college.

Truth to be told, this is the closest I’ve ever gotten to college graduation.”, and soon after he firmly compliments his audience, the graduating students of Stanford University. Although it is very unlikely to give a Commencement speech without completing studies at college, Jobs’ speech is about following different paths and being happy and courageous throughout life and that is why he is suitable for that. Additionally, he uses that to develop his ethos as credible rhetoric.

Jobs tells three personal stories with an uplifting tone, where he stars each story from a low point of his life and ends it with a resolution of getting to a higher point, and enables the development of pathos.

The first story that Jobs mentions is about connecting the dots of life, and as he metaphorically says “Again, you can’t connect the dots looking forward; you can only connect them looking backward.” This statement is beyond excellent and thanks to Jobs’ good use of the rhetorical device anaphora, he repeats this statement throughout the story to make it even more noticeable and meaningful.

Moreover, Jobs tries to say with this metaphor that people who are trying to control the future outcome of their activities forget to focus on their present; in addition to this, he uses this to advise his audience to stop worrying about the future. In this story Jobs elicits pathos from his audience while discussing his childhood, being adopted, and spending his parents’ savings for going to Reed College, which causes an emotional connection with the audience.

Furthermore, he maintains the emotional connection while speaking of the low points of his life after dropping out of college “I didn’t have a dorm room, so I slept on the floor in friends’ rooms, I returned Coke bottles for the 5-cent deposits to buy food with, and I would walk the 7 miles across town every Sunday night to get one good meal a week at the Hare Krishna temple. I loved it.” he uses pathos to describe that he had nowhere to live and had minimal amounts of food and money, and from that, the graduates can understand that sometimes even the most successful people come from misery. In the following part Jobs uses logos to appeal to the logical understanding of his audience by giving a description of how he contributed to the development of the modern society “If I had never dropped in on that single course in college, the Mac would have never had multiple typefaces or proportionally spaced fonts. And since Windows just copied the Mac, it’s likely that no personal computer would have them. If I had never dropped out, I would have never dropped in on this calligraphy class, and personal computers might not have the wonderful typography that they do.” He finishes the first story with amazing advice to all the graduates “So you have to trust that the dots will somehow connect in your future. You have to trust in something — your gut, destiny, life, karma, whatever. This approach has never let me down, and it has made all the difference in my life.”

The second story Jobs dedicates to the love and loss in his life. He explains the statistics of his company Apple “Woz and I started Apple in my parents’ garage when I was 20. We worked hard, and in 10 years Apple had grown from just the two of us in a garage into a $2 billion company with over 4,000 employees.” and focuses on its creation, growth, and worth so that can appeal to the rational thinking of the students. Further, he states one of the greatest losses in his, the moment when he got fired from his own company “We had just released our finest creation — the Macintosh — a year earlier, and I had just turned 30. And then I got fired.” This statement allows him to evoke ethos and pathos from the audience since it is about a great loss and it is told very honestly.

That moment Jobs clarifies as another low point in his life, but still, that didn’t his creative ideas and thoughts. In this quote “I didn’t see it then, but it turned out that getting fired from Apple was the best thing that could have ever happened to me. … During the next five years, I started a company named NeXT, another company named Pixar, and fell in love with an amazing woman who would become my wife.” Jobs again emphasizes how his life turned from the lowest to the highest point of happiness, which makes him even more credible. It is very ironic that Apple bought NeXT and it ‘the heart of Apple’s current renaissance’. He ends this story with another ambitious motivational quote “Sometimes life hits you in the head with a brick. Don’t lose faith. I’m convinced that the only thing that kept me going was that I loved what I did. You’ve got to find what you love. And that is as true for your work as it is for your lovers.”

The last story that Jobs tells is about death. In this story, he uses pathos in order to gain the audiences’ sympathy, which can be seen as he says “About a year ago I was diagnosed with cancer. … The doctors told me this was almost certainly a type of cancer that is incurable, and that I should expect to live no longer than three to six months.” Since some of the graduates in the audience may have gone through the same disease, it causes Jobs pathos to be even more visual. In addition, with this statement, he proves that even strong men who conquer their challenges can be taken by disease. Although Jobs survives thanks to surgery, he uses this near-death experience to encourage the students that life is short and they should become what they truly want until is too late “Your time is limited, so don’t waste it living someone else’s life. Don’t be trapped by dogma — which is living with the results of other people’s thinking. Don’t let the noise of others’ opinions drown out your own inner voice. And most important, have the courage to follow your heart and intuition. They somehow already know what you truly want to become. Everything else is secondary.” which is the motivational quote expressed through this last story.

To conclude, Steve Jobs’ Commencement speech is a massive ‘triumph’ in terms of successfully persuading the graduating class of Stanford University to follow their dreams, to have courage, do what the sincerely love, and always stay happy and positive no matter what life brings them. The cause for that is the magnificent use of the rhetorical appeals present throughout the whole speech. The pathos that allows the audience to sympathize with all the ups and downs in Jobs’s life, the ethos that makes Jobs credible rhetoric who successfully lived his life, and the logos that logically supports Jobs’s ideas with widely known information about the companies and people mentioned. 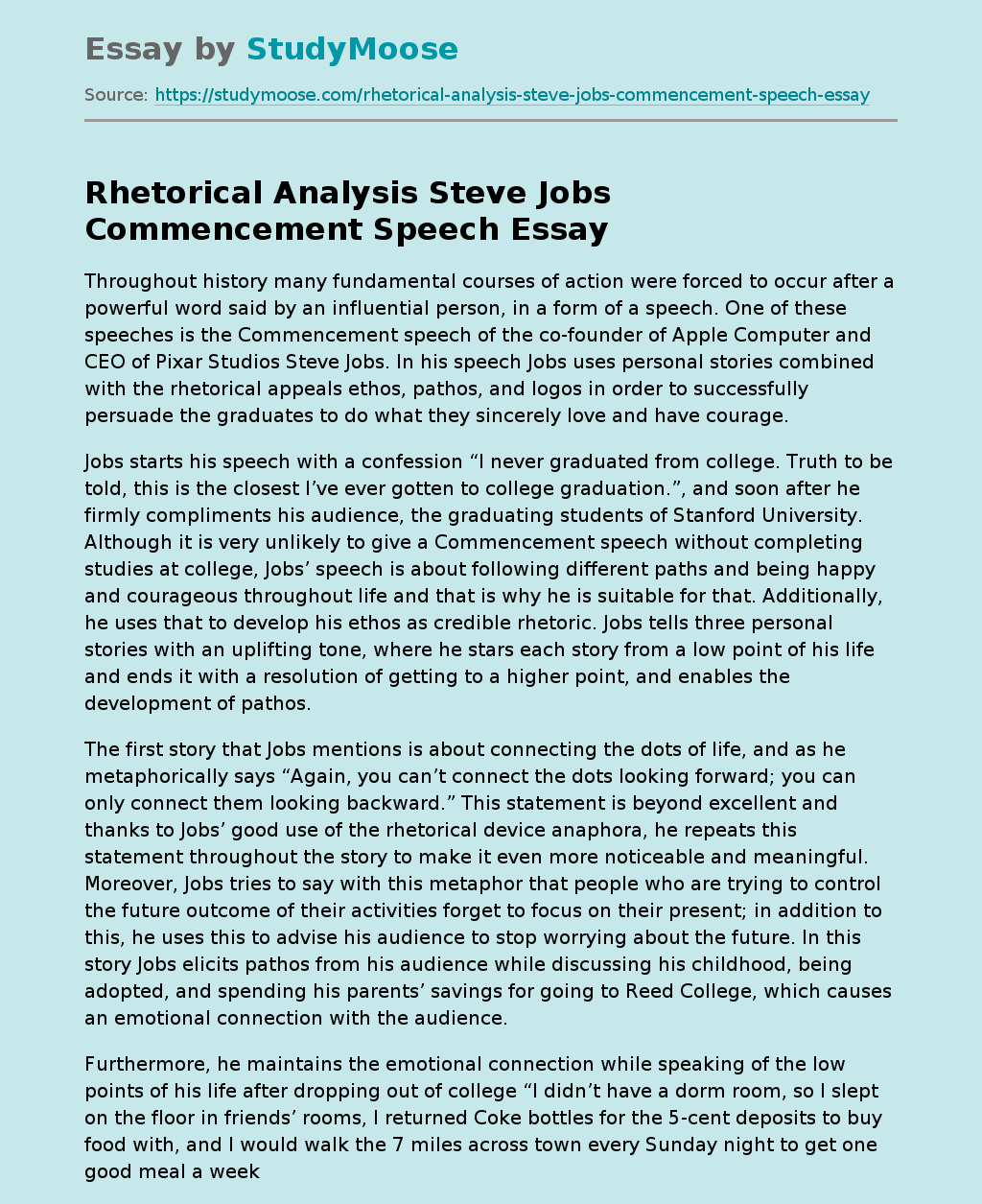