On June 12, 2005 Steve Jobs made a commencement speech to Stanford University for the graduating class of 2005. He shared how he became a successful businessman to all the people in the crowd. He gave advice for the new graduates for their life to prosper. In Steve Jobs commencement address his message of living life to the fullest comes across as profound and extensive due to his use of the rhetorical tools such as ethos, pathos, and logos.

His central idea of the speech was living life to the fullest.

In his address, he often said to try new things, and some changes in life come without suspecting it. By just going with his gut and dropping out of college, he succeeded in many different ways. This exhibited how he did not second guess himself in his decision, and was finally able to take the classes that looked interesting to him(Steve Jobs, June 12, 2005). Steve brought up many essential points to lead the graduates to the right path.

He got his core part across about life with using the tools such as ethos, pathos, and logos to make his speech more powerful.

One of the great tools Steve Jobs uses in his speech is Ethos. Ethos is used as a way to show credibility to the reader or listener. In his speech, Jobs showed ethos in the line, “We worked hard, and in 10 years Apple had grown from just the two of us in a garage into a $2 billion company with over 4,000 employees.

” This line spotlighted how much success he achieved in ten years. He wanted to prove to them you can start from nothing and generate more than you can imagine. Jobs was tenacious to what he loved and created an empire from doing so.

Another tool mostly used in his speech was Pathos. Pathos is used to connect to the listeners emotions and can cause the speech to come alive. Some examples he showcased with Pathos was, he had no dorm room and had to stay on the floor at his friends. Jobs was not wanted from his mom and the first couple that was going to get him rejected the adoption(Steve Jobs, June 12, 2005). These stories can reveal Steve had some emotional hardships but did not use it as an excuse. He still went into a great career like technology. He followed his heart and had to trust he was doing the right thing for his path. The worst things that happen in life, can turn out to be the best lessons to learn. Jobs used this tool with a purpose in mind. Pathos renders a way for the audience to relate to the author in a different way the other tools can not.

An additional tool Jobs uses is Logos. Logos is used to reference facts and statistics. A main line in his commencement speech was, “Death is very likely the single best invention of Life. It is Life’s change agent. It clears out the old to make way for the new.” This part in his speech speaks wonders. It is a very powerful saying, and wants the listeners to realize the amount of time you have in this life. Another major story Jobs explained was about receiving pancreatic cancer. The doctor told him he only has three months to live(Steve Jobs, June 12, 2005). This was a moment of realization of what he had to accomplish and do so in so little time. Jobs brings up this story to show the graduates you can have your whole life planned out with living till your old, but realistically you never know how quickly time can go.

Jobs rhetorical strategy was very effective by using ethos, pathos, and logos. His message became that much stronger by showing the emotion, logical, and credibility side. By using these tools, it can appeal to all the different graduates and the ones listening that day. Jobs used more Pathos to get people’s emotion and make it even more effective. He used ethos for those who appeal to ethics. Last, Jobs had logos for listeners who appeal to logic and facts. Approaching the audience with all three of these techniques, it allows for all the graduates to understand in their own way.

Steve Jobs made an incredible speech about his life. He wanted to show the college graduates how he was just like them and struggled in life. The main message that came across in his commencement address was, living life to the fullest because you never know how much time you really have in this world. Like Jobs said, “It clears out the old to make way from the new.” He shared many of his hardships and explained how he came up on top. Jobs did not start off as wealthy and wise, he had to learn through his troubles. He shared a last piece of wisdom for the graduates by saying, “Stay Hungry, Stay Foolish,” and those words he wants us to use in our near futures for pure success. 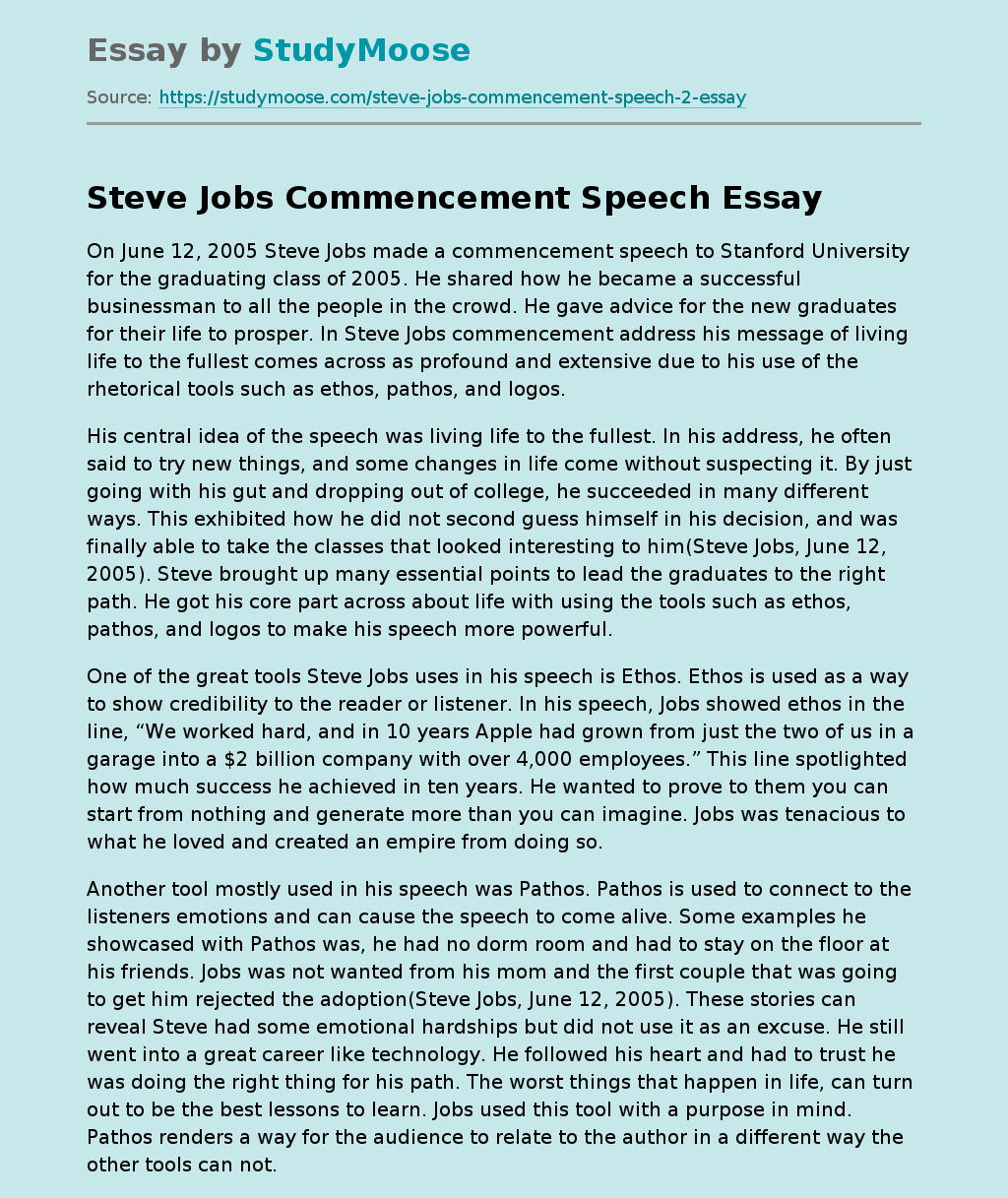