Steve Jobs’ success story began in 1976 when he and a friend built the first personal computer. He founded Apple in April 1, 1976; he was the Chairman and CEO of Apple Computers Inc. until he walked out due to a power struggle. He did not let this obstacle stop him. He went and started other businesses and developments. In 1984, he developed the Macintosh, which was the first small computer with a graphic user interface. In 1985, he started NeXT, a year later he bought Pixar Animated Studios.

Don't use plagiarized sources. Get your custom essay on
“ Steve Jobs Biography ”
Get custom paper
NEW! smart matching with writer

At Pixar he held the position as the CEO.

Jobs contracted with Disney producing a number of popular animated films. Among these films were Cars, The Incredibles, Toy Story, and A Bug’s Life. He was certainly one of the world’s most successful businessmen. Twelve years after leaving Apple, Jobs returned as Apple’s interim CEO. Jobs changed the way the world thinks and feels about technology. Steve Jobs is also known for his unconventional leadership.

He was a high-maintenance worker. He expected excellence from both himself and the employees.

He was known for his direct criticism when he felt was necessary. There is no doubt that Jobs was an exceptional leader. Introduction Over the past forty years, the computer industry has taken great leaps to where it is today. One of the most influential people during this time was Steve Jobs. He is considered a leading figure in both the computer and entertainment industries. Jobs is listed as Fortune Magazine’s most powerful businessman of 2007.

His life had many struggles, but he always found a way to make his ideas succeed. Childhood

Steven Paul Jobs was an orphan adopted by Paul and Clara Jobs of Mountain View, California in February, 1955. Jobs was not happy at school in Mountain View so the family moved to Los Altos, California, where Steve attended Homestead High School. His electronics teacher at Homestead High, John McCollum, recalled he was “something of a loner” and “always had a different way of looking at things” (Isaacson 23). After school, Jobs would attend lectures at the Hewlett-Packard electronics firm in Palo Alto, California, where he was hired as a summer employee.

Another employee at HP was Stephen Wozniak, a recent dropout from the University of California at Berkeley. An engineering whiz with a passion for inventing electronic gadgets, Wozniak at that time was perfecting his blue box. The blue box was an illegal, pocketsize telephone attachment that would allow the user to make free long-distance calls. Jobs helped Wozniak sell a number of the devices to customers. This was the defining moment of their relationship, Wozniak as the brains, Jobs as the business (Isaacson 28).

Instead of attending either Berkeley or Stanford, Jobs decided on the very liberal Reed University in Oregon. This is where he was introduced to philosophies, ideas that would shape how he would treat the business world, and LSD. At this time, school was not important and he withdrew after the first semester of college. When he returned home, he was thin and disheveled. He embraced a new goal of traveling to India in pursuit of “enlightenment” (Isaacson 49). He was a very big advocate of Zen Buddhism.

Going to work for Atari after leaving Reed College, Jobs renewed his friendship with Steve Wozniak. Jobs and Wozniak put together their first computer, called the Apple I, in Jobs’ family garage. They marketed it in 1976 at a price of $666. The Apple I was the first single-board computer with built-in video interface and on-board ROM, which told the machine how to load other programs from an external source. They managed to make their first “killing” when the Byte Shop in Mountain View bought their first fifty fully assembled computers (Isaacson 68).

On this basis the Apple Inc. was founded, the name based on Job’s favorite fruit and the logo. The following year, Jobs and Wozniak developed the general purpose Apple II. The design of the Apple II did not depart from Apple I’s simplistic and compactness design. The Apple II had built-in circuitry allowing it to interface directly to a color video monitor. Shortly after the release of the Apple II, Apple Inc. went public making the company worth $1. 2 billion (Butcher 94).

Jobs was smart in that he positioned himself for success. He knew how to be at the right place at the right time. The downside to this was he always wanted more. He had a hard time putting his vision down in a practical manner. He saw a computer with an elegant exterior but the problem with his vision was that the way he had to have it would make production nearly impossible. These unreal expectations were called his “reality distortion field” (Isaacson 124).

Jobs became fixated with a new idea for a personal computer, called the Macintosh. To help him market these new computers Jobs recruited John Sculley from Pepsi Cola for a position as president at Apple. Jobs was so focused that if you did not work in the Macintosh division, he treated you like an entirely separate person. The Macintosh division received higher salaries, invitations to company sponsored parties, and front row seats to company meetings (Butcher 136-148).

“While Mr. Jobs’ stated positions on management techniques are all quite noble and worthy, in practice he is a dreadful manager. It is an unfortunate case of mouthing the right ideas but not believing in or executing them when it comes time to do something…Jobs regularly misses appointments. He does not give credit where due. Jobs also has favorites, who can do no wrong—and others who can do no right. He interrupts and doesn’t listen. He doesn’t keep promises. He is a prime example of a manager who takes the credit for his optimistic schedules and then blames the workers when deadlines are not met” (Butcher 161).

NeXT and Pixar Jobs treated Sculley as if he were his best friend, but he actually despised him being at Apple. After a power struggle with the board of directors in 1985, Jobs left Apple and founded NeXT. His vision with NeXT was to create a computer for the higher-education and business market (Isaacson 211). In 1986, he acquired the computer graphics division of Lucasfilm, which was spun off as Pixar. During his time serving as the CEO of Pixar, movies such as Toy Story (1995) and A Bug’s Life (1998) were credited to Jobs as an executive producer.

He served as CEO and majority shareholder until Disney purchased Pixar in 2006. Reinstated After the computer industry at NeXT began to fail, Jobs decided to focus on creating software. While this was happening, Gil Amelio had replaced John Sculley at Apple. Apple’s business was suffering due to there being no creative genius striving to invent something new. Amelio noticed that Jobs had created an operating system called NeXTSTEP and decided that it would be in Apple’s best interests to purchase NeXT, bringing Jobs back into the company that he created.

NeXTSTEP platform later became the foundation for Mac OS X (Isaacson 305). Jobs returned to Apple as an advisor, and then took control of the company as interim CEO. During this time, he brought Apple from near bankruptcy to profitable by 1998. As the new CEO, Jobs oversaw the development of the iMac, iTunes, iPod, iPhone, and iPad. Jobs also developed the Apple Retail Stores, iTunes Store, and the App Store. Apple became the world’s most valuable publicly traded company in 2011 (Isaacson 348-511).

Without Jobs’ intervention in 1996, Apple would have went bankrupt and had to close. The reinvigoration of the company is regarded by many commentators as one of the greatest turnarounds in business history (Isaacson 560). In Remembrance

In 2003, Jobs was diagnosed with a pancreas neuroendocrine tumor. Jobs was against going to the doctor for most of his life, so he was reluctant to get his stomach pains checked out. Since he waited so long, the tumor was almost untreatable. In 2009 he received a pancreas transplant, but the cancer had already spread to different parts of his body. Jobs resigned from Apple in August of 2011 and was elected Chairman of the Board. As his health continuously declined, he died on October 5, 2011.

Conclusion Jobs’ major strength lies in his curiosity and innovation within the market. To say that Steve Jobs is something of an enigma is an understatement; his style of management and his ability to accurately predict trends made him more than just a valuable industry leader, it almost guaranteed that those who paid attention reaped the profits of his predictions. Apple has been ahead of the curve time after time (Brayan 1). Jobs had the ability to see far beyond the limitations of time and space. He lived in his own little world where success was inevitable and the steps to get there would not always be appropriate, but if it meant that those decisions would lead in the direction he wanted, then those steps would not be questioned. 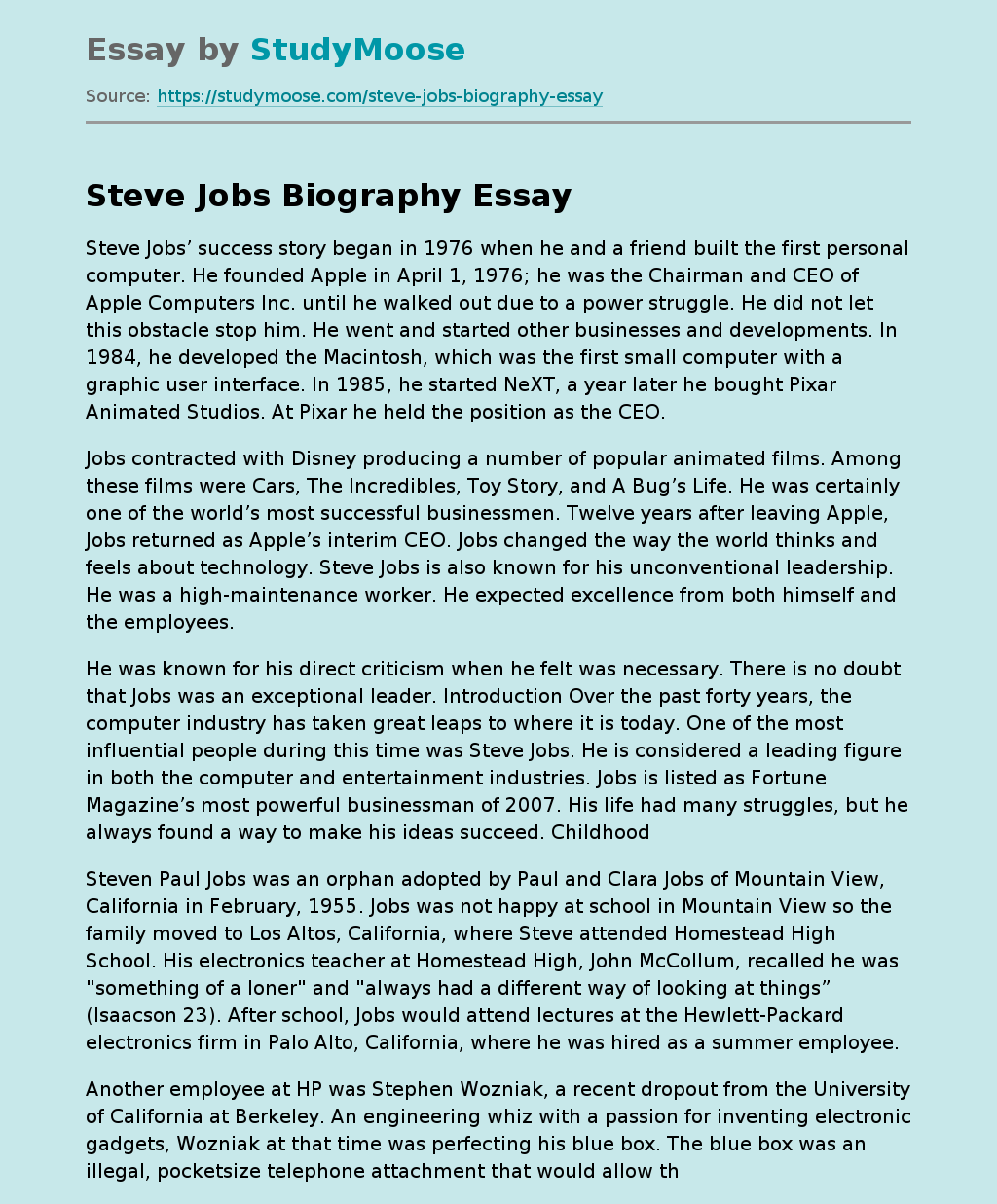