Leadership style is a leader’s style of providing direction, implementing plans, and motivating people. There are many different leadership styles such as leaders in the political, business or other fields. Steve Jobs (24th February, 1955 – 5th October, 2011) is one of the most remarkable leadership people in modern history and he is well-known as the co-founder, chairman and chief executive officer (CEO) of Apple Inc (Misa, 2011, p. 919). In any cases, Steve Jobs had displayed personal characteristics as a leader. Steven Jobs returned back to Apple when the company was going through a terrible phase and with amazing leadership style of him, Steven Jobs brought success for Apple.

Don't use plagiarized sources.
Get Your Custom Essay on Steve Job’s Leadership Style Just from $13,9/Page

There are three leadership styles which he used effective in changing Apple. He realized that company required a charismatic leader to step and transform the company, applied tyrannical leadership style – hire and fire at will and risk taking and daring.

Firstly, Steven Jobs is a transformational leader. Steve Job’s is a visionary inventor who is co-founded and CEO of Apple Inc.

, the most valuable company in Silicon Valley. Before claiming his title as CEO, he had transformed no fewer than five different industries: computers, movies, music, retailing, and wireless phones… Look at the two tenures of Jobs at Apple, firstly as the visionary founder who ushered a new era in personal computing and lift the company to new heights. Steve Jobs not only revolutionized how we use computers, how we listen to music, watch videos but also transformed two industries, computers and consumer electronics and created breakthrough products and one of the firsts to be designed in tune with what the consumers wanted (Buckley, 2011).

IPod, iTunes and iPhone which have revolutionized on how people listen to music today and how people willing to spend money to receive all types of digital content through App Store application. Steve Jobs was never a traditional leader, he always wanted to stay ahead and offer something different to customers (Lesonsky, 2011). Eric Reis, a successful entrepreneur, stated that successful companies in the future is need to fast adapt by practicing continuous deployment of idea, planning and more experimentation, ie creating organizations that have the ability to cultivate, test and materialize new ideas (Heskett, 2013). So, in terms of the large scale innovations like what Apple went through, transformational leadership was necessary. Secondly, Steve Jobs used tyrannical leadership style – hire and fire at will – to ensure that his employees were always delivered products of extremely has high quality. The American author Andrew Keen’s wrote “There’s not an ounce of democracy at Apple. That’s what makes it a paragon of such traditional corporate values as top-down leadership, sharply hierarchical organization and centralized control.

It’s Steve’s company – pursuing his vision, at his pace, with his team, making his products. Without Steve Jobs’ authoritarian leadership, Apple would be just another Silicon Valley outfit…” (Keen, 2007). CEO of Enterprise Management Associates, said, “Steve Jobs is a special example of a leader who dominated his company employees and guided them rightly with his authoritarian leadership style and unmatchable vision” (Chaudhuri, 26th April, 2012). Steve Jobs employees were always highly concentrated in work and delivered products of extremely high quality, they feel high pressure with the leadership of him, but this leadership style is also source of inspiration of employees because their successful ability can come out from tough situations. As he said, “an enduring company where people were motivated to make great products…a company that will stand for something a generation or two from now.” Jobs created a competitive culture where teams worked in isolation competing with other teams for designing products in the same organization is necessary (Isaacson, April, 2012).

Finally, one of leadership style, daring or risk taking is essential for a leader especially in today’s development environments that demand the need for flexibility to respond to risk which means the leadership trait of risk taking to perform the changes is very important with a leader. Kouzes and Posner showed perspective that leaders who are adventures into new territory and take the risks inherent in innovations (Kouzes & Posner, 2012). The ability to take risk – trying something that could fail – oftentimes is witnesses of high self-confidence. As in the case of Steve Jobs, he has been famous for taking risks when he was pursuing innovative products. Apple rose to prominence because Jobs was willing to bet the entire company on the Apple II. In the beginning, he rely on released the first Mac, he saw the value in what he was creating and believed in it enough to bet the entire future of the company on it, but Apple declined because innovation must spent lot of money.

The bet turned around again when Steve came back, became CEO, and bet the whole company on the iMac and then on the iPod. The times when Apple was successful, Steve forced the company to create loads of offerings and focus on great technology products, it is iPhone. Alan Deutschman wrote “The big thing about Steve Jobs is not his genius or his charisma but his extraordinary risk-taking” (Deutschman, 2000). In conclusion, Steve Jobs was a transformational leader, he brought change to Apple, challenged the stakeholders and demanded his employee’s to achieve impossible goals. His autocratic leadership style was different from the other leaders. He was a demanding perfectionist and never took no for an answer. His perseverance and never say no has brought him and Apple to an unimaginable success. Some critics do not accept with leadership style of him. However, Apple’s success has showed leadership style of Steven Jobs is wonderful. 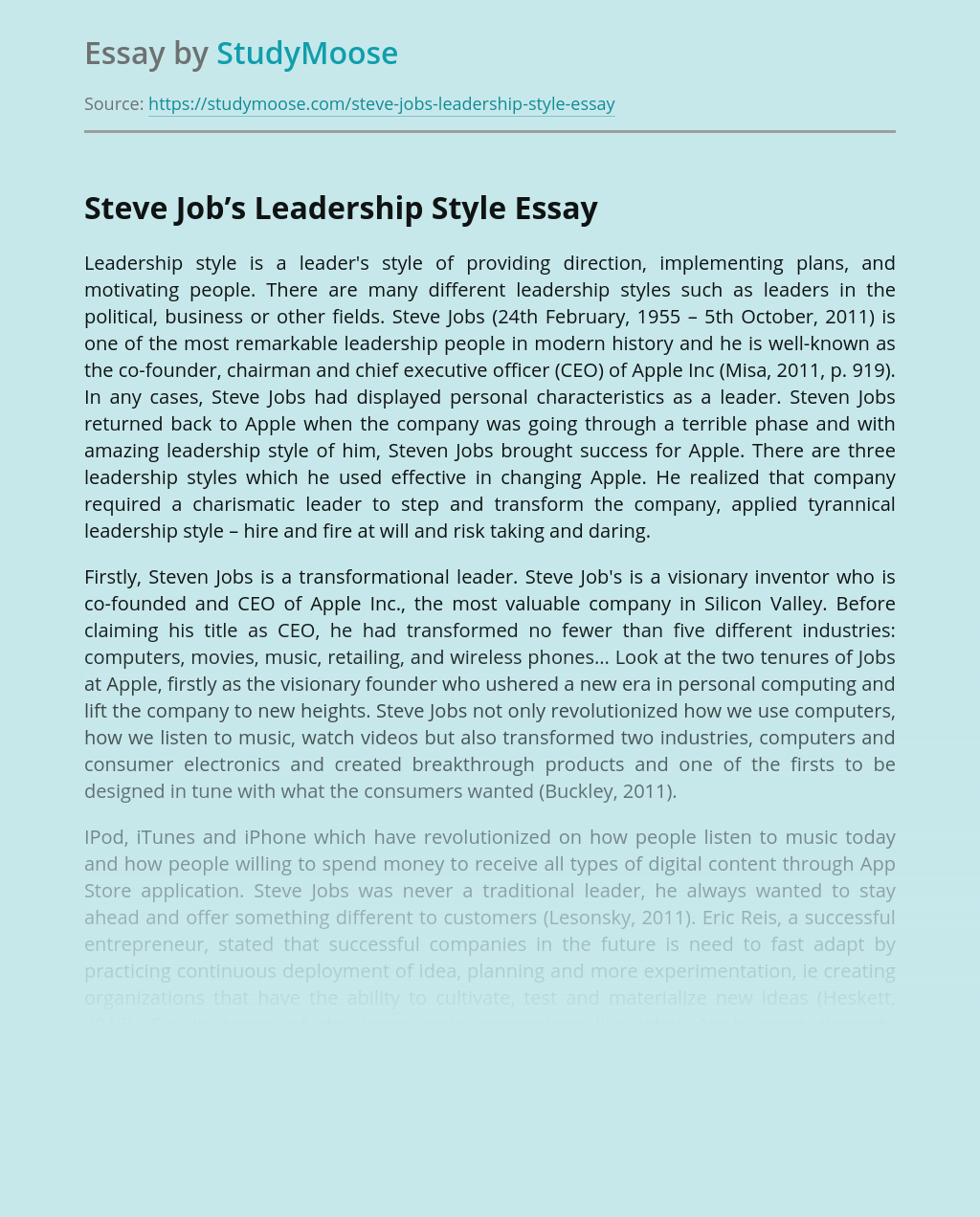 Entrepreneurship and Small Business Development Context 1. Introduction 2. Literature Review 3. A review of relevant material related to the selected entrepreneur. 4. Analysis 5. Conclusion 6. References 1. Introduction Nowadays, businesses are facing development problems. Problems are included: the competitors, management system, leadership and so on. For entrepreneurs, the leadership is an essential leadership... VIEW ESSAY

View sample
Assess Whether Pericles Was a Good or Bad Leader

Pericles (C. 495-429 BC) was a very influential politician and general in Athens. He is said to have brought about a very important time in Athenian history known as ‘The Golden Age of Athens’ where he brought about or placed focus on certain things like art, which gave Athens the reputation as the cultural and... VIEW ESSAY

* George Washington – led colonists during the war. He was a colonel. Made a name for him and the experience of this war helped in the American Revolution. Both civil and military because he led a group of Militia. * General Edward Braddock – He led a group of two thousand men to capture... VIEW ESSAY

Establish qualifications. Note your authority on the subject. Establish a common ground. “I have your best interests in mind, etc” Helps the audience believe your argument. Demonstrate fairness. Acknowledge opposing ideas without disagreeing. Note the introductions. Include at least one of the above. Following must be used. Announcement of subject. (problem your essay addresses) General... VIEW ESSAY