Prison Is Not a Cure for Crime

There has been a great deal written about the fact that the number of crimes have dramatically increased in recent years. Educators have debated whether criminals should be put in jail or not. One idea that has received much attention is that prison plays an important role to reduce criminals. This essay will explain that prison is a cure for crime as fas as punishment for offenders and transformation of criminals into better citizens are concerned.

One of the most important reasons why prison is a cure for crimes is that it is a punishment for culprits.

Don't use plagiarized sources. Get your custom essay on
“ Prison Is Not a Cure for Crime ”
Get custom paper
NEW! smart matching with writer

For one thing, when someone commits a crime or does not obey to the law, he must be punished. In other words, offenders have to pay because of their wrong behaviours. For example, one of my friends who has committed a serious offence such as assault must spend a long time in jail. In addition to this, a long-term prison sentence will act as a deterrent for someone who is thinking about committing a crime.

For another, innocent citizens will be hurt by culprits if government do not lock them into cells. Many countries use prisons like a tool in order to isolate and separate criminals from community. Public will live under constant fear when culprit’s have freedom outside prison. For instance, it would be difficult for an ordinary person if a murderer is living next to his door instead of in jail.

Another reason is that the crucial purpose of prison is rehabilitation of criminals.

First,many researchers claim that prison is a place where offenders have an opportunity to learn to be responsible for their mistakes. If someone behaves badly/ , other people should allow them to see what they have done is guilty whilst in prison, where they will learn how to prevent themselves from the evils. Criminals should be educated in prison in order to be sure they can be more and aware of their actions and not to re-offend. Also, jail provides culprits some skills in which they will be able to gradually make their way back into society without being discriminated for their work. For example, my close relative was sentenced for two years in jail when he committed multiple thefts. In prison, he realized several/ quite a few valuable lessons about life. After his release/ being released, his in-prison education/ training and skills helped him to turn into a good citizen. It is clear that prison serves a great purpose to the community when criminals are steered in the right direction as well.

Opponents of imprisonment may claim that prison is a convenient environment to help criminals learn a lot of skills to commit even more severe crimes. Moreover, the fact that governments put offenders to jail does not help to decrease the number of ctiminals. They have a point in thinking like that. On the other hand, they forget why we should put criminals to jail. The answer for this question is the more freedom offenders have, the more serious evils are conducted. For these reasons, jail is the best solution to limitation of crimes in the community.

In conclusion, it is undenianle that prison serves a function in educating criminals. First, it helps to turn bad people into good ones before giving them the socond chance to rehabilitate. Furthermore, those who are guilty deserve the serve punishment so as not to re-offend. If this trend continues, the work will be a much safer place to live in and parents will be no longer frightened of the evils awaiting for their children.

Prison Is Not a Cure for Crime. (2016, Oct 12). Retrieved from http://studymoose.com/prison-is-not-a-cure-for-crime-essay 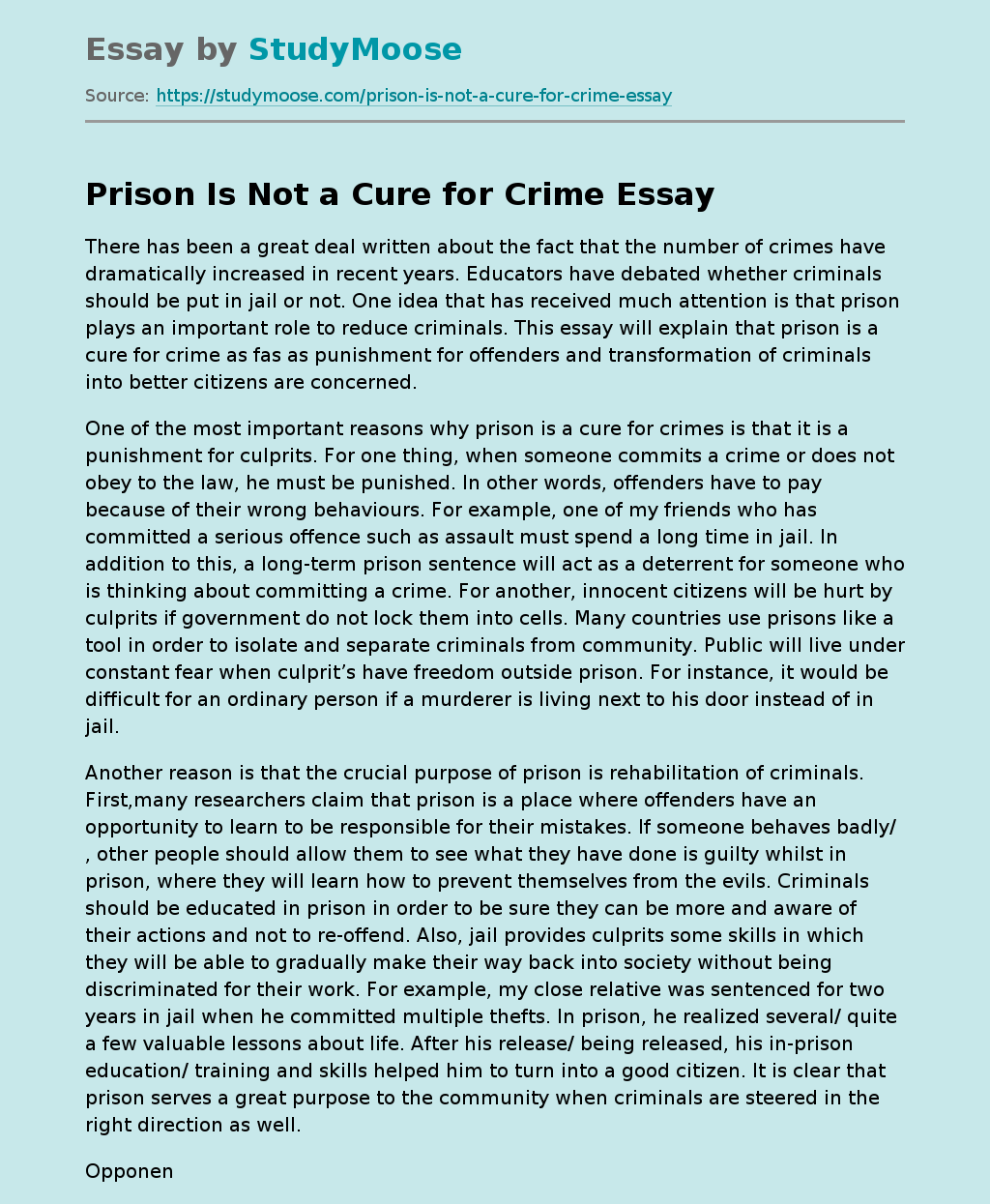