Cancer - Is Prevention better than cure?

Cancer is one of the biggest killers, 2 in 5 people will get cancer during their lifetime (ICRF 2001).

Cancer comes about in the Genes of the human body. It can start due to DNA mutations, which are either inherited from our parents, or as in a lot of cases, are brought about over a long period of time as the errors in our DNA accumulate over time due to environmental aspects that are all around us such as X-Rays, Viruses, and Background Radiation.

Don't use plagiarized sources. Get your custom essay on
“ Cancer – Is Prevention better than cure? ”
Get custom paper
NEW! smart matching with writer

There are a great many reasons why people get cancer and no sure way to cure it, so the question is, should an emphasis be put on Preventing cancer occurring or on the treatment of it. There are arguments to back both types of action but it is a question of which is more important.

Two of the biggest killers are Lung cancer and Skin Cancer and the above question has different answers for each type as some can be brought about by lifestyle and some are inherent respectively.

Here are a few points about Cancer and some of the different forms it may take in the body (www.imperialcancer.co.uk ’01)

* Most common cancers, carcinomas, arise from epithelial tissue. Epithelial tissue can be found throughout the body. The skin is one example, as is tissue that covers and lines internal organs such as the digestive tract. These account for up to 90% of all cases.

* Leukaemia’s are cancers of the bone marrow and lymph system, which make blood.

* Myeloma is a cancer that arises in the plasma cells of bone marrow.

* Lymphomas arise in the glands, ‘nodes’ of the lymphatic system. Hodgkin’s Disease is one type of lymphoma. All the others are referred to as non-Hodgkin’s lymphomas.

* Cancers of the nerve tissue are named after the specific cell they arise from.

There are many things that can lead to cancer, and some of these are known as Carcinogens, and these include Radiation, X-Rays, Cigarettes (lung/mouth/throat cancer) Alcohol (Cancer of the Liver), and such things as UV rays from the sun and Asbestos dust if it is inhaled even such things as BBQ’ed food may have a slight carcinogenic effect.

Most of these are harmless in small doses but when people start going overboard then problems can arise, such as cancers.

Prevention is maybe of the two the hardest to administer as people tend to take the “well it won’t happen to me” view, but it very often does. So persuading people to change lifestyles to try and bring down the rate of cancer is no easy task. There are lots of other ways of prevention of cancer such as, screening at an earlier age, and Healthier diets.

There are also methods like Cancer preventative drugs which are in the early stages of development but these are very hard to administer as they have a lot of Questions surrounding them such as how would research be carried out, as I would take a lifetime to monitor whether or not they were making a difference and then there are questions such as what age should they be given at and to what target group, and even if these trials were successful then it would still have to be approved by the GMC (general Medical Council) and then could take years to go into production (New scientist 4th Nov ’00, pg 50 ). Prevention does have it’s advantages as if you can persuade people to be careful then in the long run everybody is a winner because fewer people suffer from cancer, the Medical Profession then has fewer cases to deal with and so their resources are less stretched and more funding becomes available for everything else. However It does have drawbacks in that advertising the facts on prevention of cancer would be a mammoth task and could cost ï¿½ Millions.

One of the biggest Killers is Lung cancer, which is often brought about by smoking or passive smoking. Cigarettes contain many chemicals and up to 43 carcinogens, the main one being Tar

The Americans have invented a “safe” Cigarette, which has none of the cancer causing Nitrosamine chemicals in it (This is seen as a breakthrough but is still no sure fire way to prevent Lung cancer) There can be very few breakthroughs in the field of prevention of cancer because so much of it is down to the individual wanting to prevent the cancer and taking action. A lot of it is very simple but people are stuck in their ways and will not change that as they see no problem with it.

There is a lot of research going on into the Cure of cancer, which is good, but some would say, “Should it be necessary? If people looked after themselves then the number of cancer patients would drop considerably.”

This is true but for the Cancer patients that have say Breast cancer through no fault of their own need to also be thought of.

People often say that the Treatment of Cancer using chemotherapy is scarier and actually worse than the cancer itself. It is the use of radiation to kill off cancerous cells but can also lead to things such as hair loss. These bad points aside it is one way that can give some cancer patients a chance of survival.

New Technology has also brought about the development of a new type of scalpel for surgery on cancer, at present the surgeons can only remove what they presume to be cancer cells but it only takes one to be left behind for the cancer to continue spreading, so new scalpels with probes connected are being pioneered which are able to reveal which cells are cancerous. This could help greatly as 25% of Operations on breast cancer have to be repeated because some cancerous tissue is left behind.(New Scientist Jan 6th 2001.)

Cancer - Is Prevention better than cure?. (2020, Jun 01). Retrieved from http://studymoose.com/cancer-prevention-better-cure-new-essay 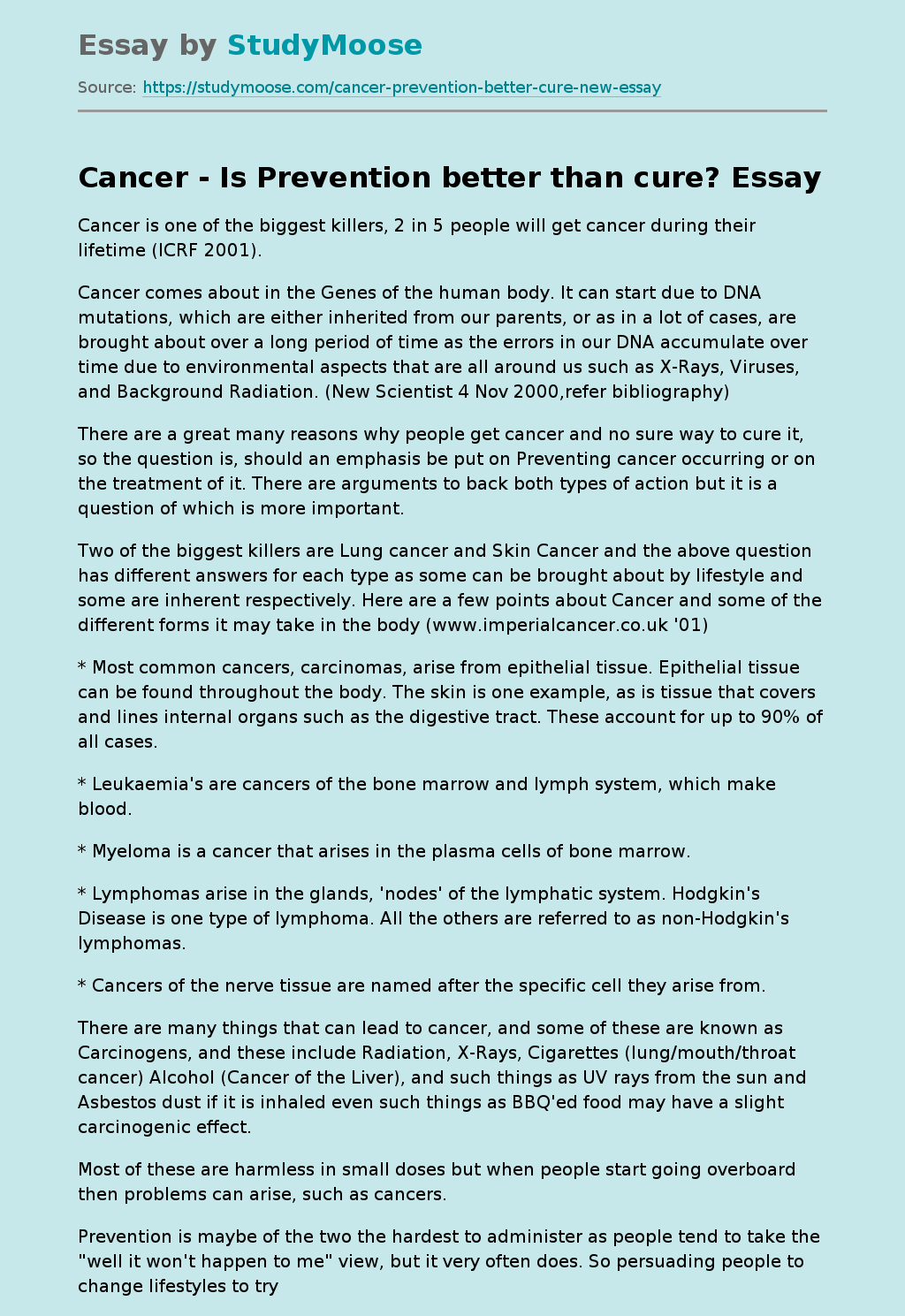