Nature of the Problem When it comes to the nature of the problem we can agree that there have been many issues with our health care system for many generations. There has not just been one problem, but quite a few. Prior to the Patient Protection and Affordable Care Act one of these problems was the cost of health care as well as health insurance. By 2008, the cost of health care had skyrocketed, and it seemed as if insurance plans were not covering as much as before and that was only if you were fortune enough to afford coverage (Editorial: Life before Obamacare, 2017).

Don't use plagiarized sources. Get your custom essay on
“ Nature of the Problem When it comes to the nature of the problem ”
Get custom paper
NEW! smart matching with writer

The lack of adequate healthcare was also a reason for the policy to be created. Preventive services were not covered which was a reason so many individuals went without being detected of any serious illnesses. Individuals could be denied coverage because of a pre-existing condition, or even charged more for services. Many were also in debt because of medical bills which led to bankruptcies.

However, the nature of the problem did not stop there, during the Great Recession there was an increase of people without health insurance, because there was a rise in unemployment and this resulted in a loss of job-based health insurance for those who were newly unemployed (Trevino, 2018, pg.41). How Widespread The problem did not discriminate anyone, it was widespread from individuals with little or no healthcare coverage at all. Although, many could obtain insurance through their employers, their employer chose the plan and what type of coverage options and doctors you could see.

However, there were other types of ways of obtaining health insurance. One way was by Medicare which only covered seniors and Medicaid which covered children, lower income families and, individuals with disabilities. Since many were too young for Medicare and made too much to qualify for Medicaid, this left them uninsured because they could simply not afford to purchase health insurance through an individual health insurance market. How many were Affected, who are Affected The number of individuals who were uninsured, and the share of the nonelderly population who were uninsured, increased from 44.2 million to 46.5 million between 2008 and 2010, during this time our country was facing an economic recession (Key Facts about the Uninsured Population, 2019). Most individuals who were uninsured were working families who couldn’t afford health insurance or did not have access to health insurance. Not only were working families affected but also poor working families and even full-time workers. Other individuals who were affected were women. Young adults were also affected once they were no longer able to stay on their parent’s health insurance plan. The whole nation was being affected by one way or another. How They are Affected One of the primary reasons Americans were uninsured was due to the cost and because of job loss. The way women were affected is that they were being charged more to purchase health insurance. Individuals were also not getting the proper care; certain services were not being covered and individuals were being denied coverage. The uninsured were mostly like to die due to not having health insurance. When it comes to the young adults, they were affected because some were going to school and could not afford to purchase health insurance or, if they did have a job it was usually a part time job that did not offer health insurance. Individuals were also affected by their growth in personal debt and bankruptcy due to medical cost. Not only were individuals being affected but so was the nation, due to a growing national debt and deficit because of the healthcare crisis. Evidence Regarding CausesThere were a few different causes that existed regarding the problems with the healthcare system. The number one issue was the number of individuals who were uninsured. Because these individuals were uninsured, they frequently faced medical debt. The amount of unpaid medical bills became the number one cause of bankruptcies, that have occurred in our country (Freymann, 2014). Many have also gone without the necessary care. For example, by skipping their prescribed medications. According to NerdWallet, 15million people had to dig into their saving to cover medical bills (Mangan, 2013). Once they have used all their resources, they have no other choice but to cut back on expenses. NerdWallet found that 25 million people tend to skip their medications by taking less, or by delaying refilling their prescriptions (Mangan, 2013). By not taking their medications of visiting the doctor for routine visits, it has caused them more health issues in the long run, such as many dying prematurely. In 2002, the Institute of Medicine released a groundbreaking report, Care without Coverage: Too Little, Too Late. This report estimated that, nationwide, 18,000 adults between the ages of 25 and 64 died in 2000 because they did not have health insurance (Care without Coverage: Too Little, Too Late, 2002). The Policy Description How Does the Policy Work? The Patient Protection and Affordable Care Act is expected to work by being able to provide more Americans access to affordable health insurance. It is also expected to improve the quality of healthcare as well as health insurance. It is supposed to regulate the health insurance industry and help reduce the health care spending in the United States. This policy to is to accomplish the above by several regulations, which will include taxes, tax breaks, mandates, and subsides. 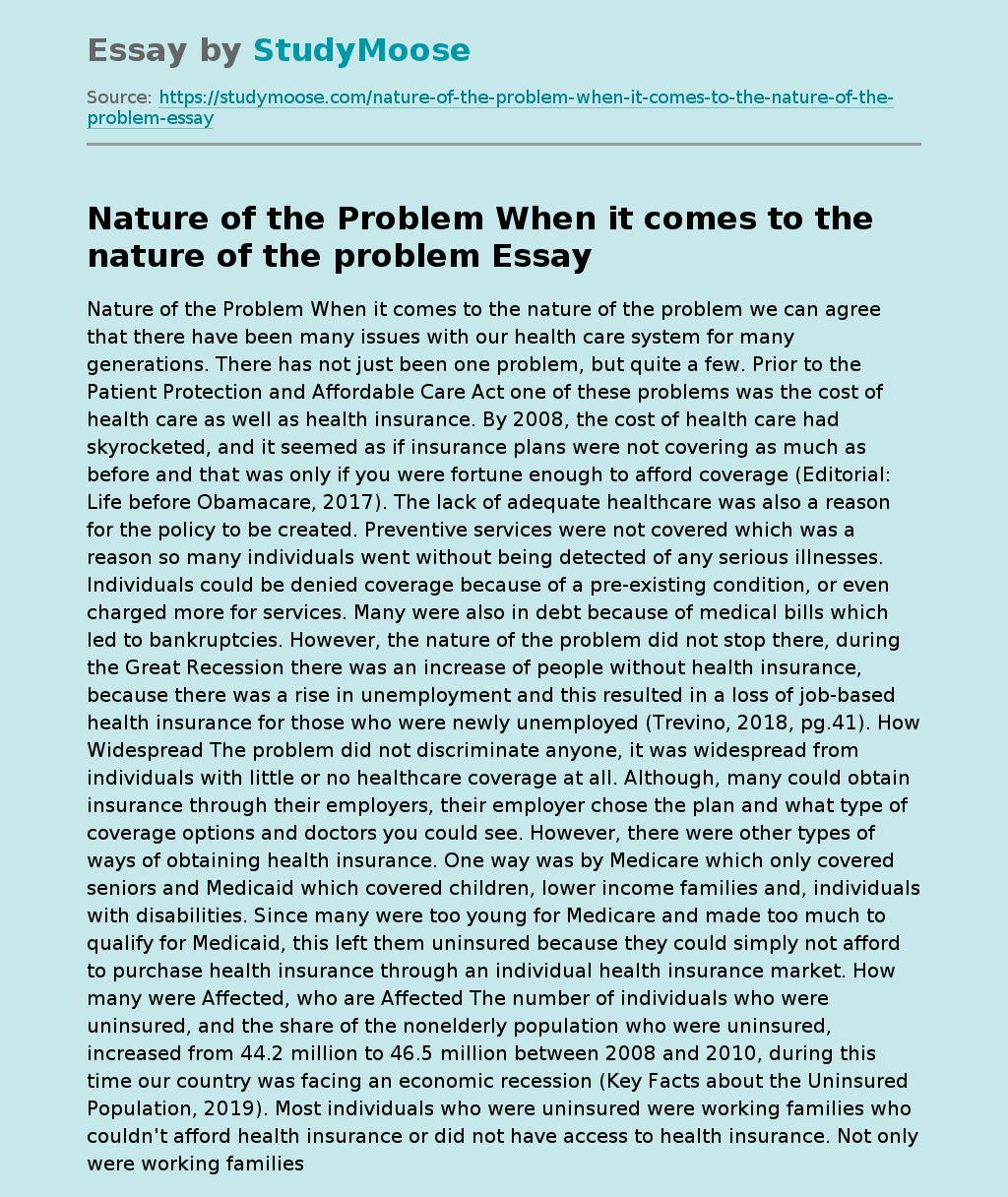