The very well-known comic book quote that almost everyone, even if they have not seen the movie or have read any of the Spider-man comics has heard this symbolic sentence at least once. It is an essential part of his origin story and is crucial to why he continues to inspire and represent multiple generations. In this essay, I want to examine this infamous motto that has subsequently been put in thoughts of Peter Parker. His Uncle Ben’s last words before death were philosophical words that cannot only be applied to the super powered web slinger, but also to every one of us.

Don't use plagiarized sources. Get your custom essay on
“ With Great Power. Comes Great Responsibility ”
Get custom paper
NEW! smart matching with writer

I will touch on certain comic issues, and the motion picture that revolve around this amazing quote. Let’s take a closer look at the ethics behind The Spectacular Spider-man!

First, In the text given I would like to input a deeper meaning and thought to the word responsibility. In relation to philosopher Peter Singer, it implies that Peter Parker wanting to put on the costume again and again in order to save people is not a choice.

(Thienenkamp) It implies that he has moral duty because of his powers. To name a few: Superhuman strength, extreme reflexes, wall crawling; and the ability to sense incoming danger in his surroundings, which is called “spider-sense”.

Moreover, He has the ability to prevent suffering as Peter Singer would put it. Because Spider-man can save individuals, he has a moral obligation to do so. (Thienenkamp) Uncle Ben believed Peter had a positive moral duty, regardless of knowing he had powers.

Peter Singer delivered quite a similar statement in his writings: The Strong Singer Principle: “If it is in our power to prevent something bad from happening, without thereby sacrificing anything of comparable moral importance, we ought, morally, to do it”. (Famine) While Uncle Ben’s quote is referred to the context of a fictional comic book character’s path to becoming a superhero, Singer’s quote is dealing with the proposition of whether we have or have not a moral duty to help prevent people that suffer from extreme poverty. (Thienenkamp)

However, they both have the same significance: If we have the powers to prevent suffering and danger for others, we should, even if that means accepting personal inconveniences and hardships. Spider-man sacrifices every day. His secret identity makes his social life, love life, and his financial life extremely difficult, it eventually leads to many deaths of people important and close to him. In the motion picture with Toby McGuire, he is constantly dealing with these problems. The Daily Bugle Chief and editor hot-headed J. Jonah Jameson is constantly flooding the press making Spider-man out to be vigilante.

Spider-man fights crime while Jameson makes out as if crime falls on his hands. Jameson claims that he endangers as many people as he saves and that he hides behind a mask like a coward. (Zdarsky) William Dafoe as Green Goblin (Norman Osborn) stated that “The one thing they love more than a hero is to see a hero fail, fall, die trying. In spite of everything you’ve done for them, eventually, they will hate you.” (S. Raimi) Even after all the fake press and harsh convincing from the Green Goblin that Spider-man will always be hated and looked at as a villain. He still makes it his moral obligation to go forward through the hate and continues to be a hero regardless.

Towards the end of Spider-man Movie Norman is impaled from battle and killed as result; Peter is left depressed due to losing a father figure and now has a burden of regret for his best friend Harry, Norman’s son. Spider-man takes Normans body back to his luxurious apartment. He lays the Goblin’s body on a sofa, but Harry sees them in the process and thus blames Spider-man for his father’s death. At his funeral, he vows revenge on Spider-man and thanks Peter for being a such a great friend. You would think after all that Peter would retire and give up being Spider-man, but he keeps going.

Because of all the casualties, there are moments in Peter’s life where he barely has the mental will power to stay remaining as Spider-man. Something that is not shown in the Captain America Civil War Movie but, is shown in the Comic book version is that Spider-man unmasked his identity to the world during a press conference thinking that it could bring more good than not. However, as result of it, his Aunt May has been shot from one of his villains King-pin after finding out truly who he is. Shortly after Peter has a conversation with the One-Above-All, which is in the comic world basically God himself, Peter admits that he feels that being Spider-man is a burden or punishment and wishes that the Spider that bit him and gave him powers should have bitten someone else instead. (Aguirre)

He questions if he should still keep being Spider-man. The One-Above-All brings peter to a fictional dream containing a beach full of thousands of people whose lives Spider-man has already saved. (Thienenkamp). This piece from the comic really lets you see the type of life and suffering Spider-man goes through. However, John Stuart Mill would point out that Spider-man saving the lives of thousands outweighs his own suffering. This a very utilitarian way of thinking: Spider-man accepts the worse to achieve what is most best for the people around him. (Gordon) Uncle Bens words have hidden utilitarianism in them. Peter Singer, being another representative of utilitarianism, would go even further with this notion: He would translate into words that if Spider-man did not to use his powers to fight crime and save lives, he could be held responsible for certain deaths and casualties.

Peter Singer is a firm believer in this belief. When we walk buy someone in need and do not do anything in order to help them. It is not that we think we shouldn’t help them but, we do not help because we do not think it is our responsibility or place to act. We rely on others. Ones we think should be in charge of that situation. Our society has skewed definition of responsibility. Which is why a person who refuses to help does not necessarily make them a bad person, but that does not make the act of not helping someone any less questionable or wrong. (Thienenkamp) Spider-man could necessarily not be to blame for people’s death or accidental deaths. However, his powers give him the possibility that allows him to save lives and if he does not, that very well makes him responsible for those lives because of his abilities.

This also why as shown in motion picture Peter feels responsible for the death of his uncle, he let the robber get away at the wrestling event and he eventually murdered Ben. Peter could have stopped him and because that he did not. He becomes responsible for the consequences. Moreover, Spider-man is only focus on the results of his actions and is less focused on the attractiveness of it. Even though Spider-man is flashy, fun, and has a showman attitude. His real main concern is getting the job done and not thinking about the morality of the situation. Spider-man brings about the most well-being possible for the greatest number of people.

When Spider-man does something heroic, it makes the spectator better for having witnessed it. His way of utilitarianism and saving the helpless sends a big message for everyone. Do not worry about how people will see you if you do a good deed when others will not. Spider-man inspires others to embrace what the greater purpose is in life regardless of what might be tugging at your heart at that moment. Spider-man embodies what a true hero should be. A hero we can all believe can make a difference while following true morals and ethics.

In conclusion how can we apply Spider-man’s moral duty and heroism to our everyday lives? Clearly, none of us have superhuman powers or abilities that allow us to fight crime and save lives. But, at this point I have already mentioned Utilitarianism and how Peter Singer concludes we have a moral obligation to help people suffering from extreme poverty or danger and that taking time from our lives to donate money in hopes that it could very well save someone’s life in dire need, instead of spending it on our own personal passions or luxuries.

Singer claims that it can take up to $1400 to save the life of a premature baby. He notes that doing research on which charity is viable, should be a must. (Singer) A baby (a life) that could very well become the next selfless hero with ethics just like Spider-man who can make a real difference in the world we live in. And, from my research findings I see fit that we should all take Uncle Ben’s words into consideration. His message is meant for everyone. Because, we all have great power. And with great power, there must also follow great responsibility. 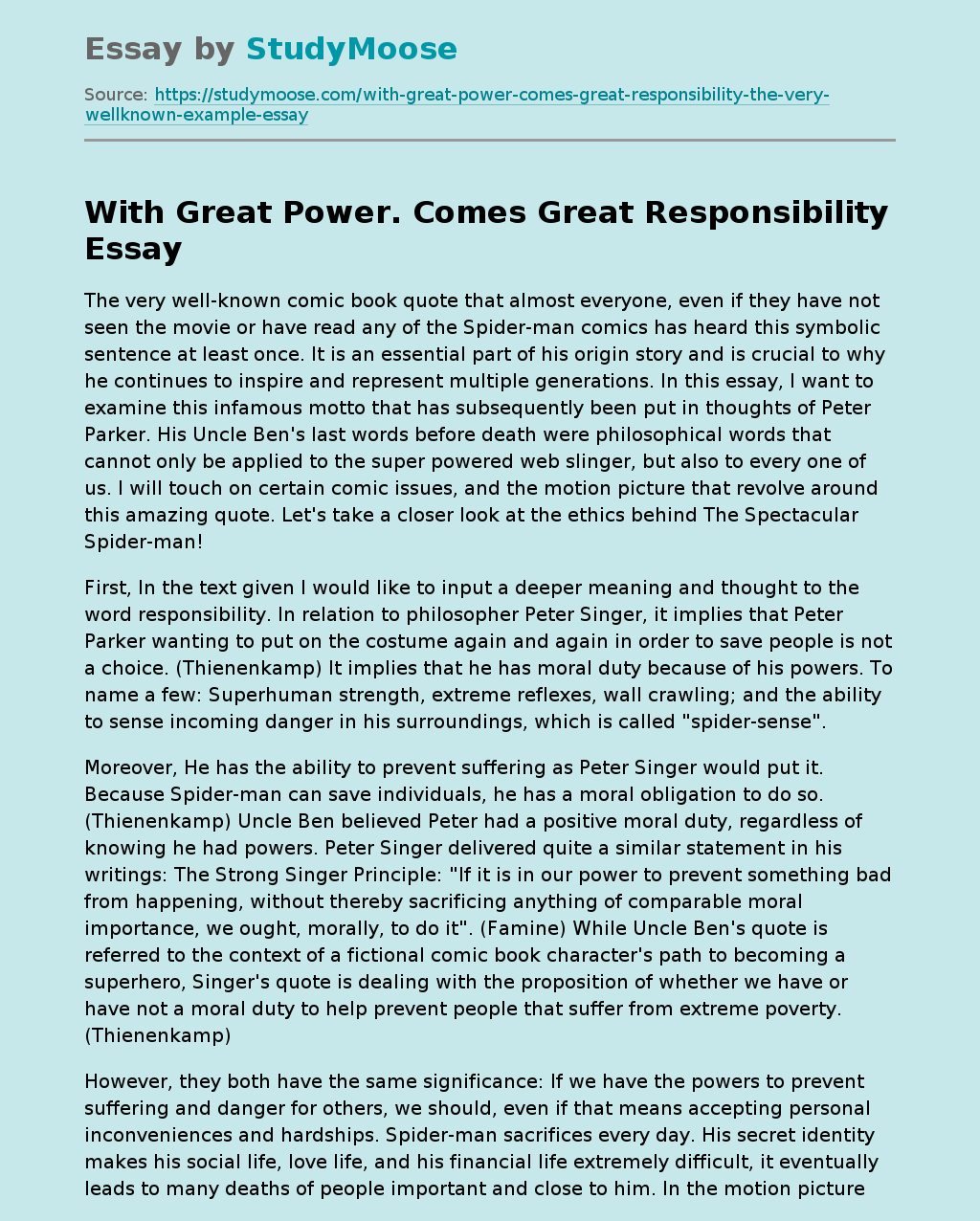