Responsibility in "The Great Gatsby"

The character qualities of individuals has become a popular theme in literature. In F. Scott Fitzgerald’s book, The Great Gatsby, Fitzgerald recognizes the conflict between wealth and responsibility. In the book the narrator, Nick, describes how two of the main characters, Tom and Daisy, use their wealth to hide from what the poor must face everyday. Tom and Daisy lived on the banks of the East Egg, where they enjoyed the finer things in life. And no matter what happened they always seemed to care only of themselves.

Don't use plagiarized sources. Get your custom essay on
“ Responsibility in “The Great Gatsby” ”
Get custom paper
NEW! smart matching with writer

In the telling of Tom and Daisy’s actions, Nick also seems to implicate that, in general, people and society use their wealth to hide behind. Tom, Daisy, and people in society dodge responsibility and reality with the aid of their great wealth.

In a quote said by Nick he states, ‘They were a careless people, Tom and Daisy–they smashed up things and creatures and then retreated back into their money or their vast carelessness, or whatever it was that kept them together, and let other people clean up the mess they had made….

’ This quote can be related to a cartoon given to us as a thought provoking reference. The cartoon is of a man and woman sitting in an all glass house and the inscription reads, ‘Of course, living in an all-glass house has its disadvantages… but you should see the birds smack it.’ In a twisted way these two quotes say almost the same thing. Nick talks of Tom and Daisy who retreat to their house and money when all hell breaks loose around them and in the cartoon you can see the two people sitting comfortably watching the world around them ‘crash and burn.

Also, in the book Tom admits that he didn’t realize his actions could be so harmful, and like the birds being hurt, the builder probably never intended to increase the number of shoe-box coffins. The cartoon refers to having ‘disadvantages’ and like the book, wealth came with a certain amount of public notice. It is a little hard to lead a wealthy life and show it without the involvement of the public; and like the glass house, with clear walls it is a little hard to find privacy. Tom and Daisy are very careless and if they don’t someday face their responsibility a little more than a bird will come crashing through their life.

Tom and Daisy are the perfect examples of the ‘poor little rich kid’ syndromes. Both of them have grown up with wealth and that is all they know. Nick’s statement about them being careless and then going back into their money is absolutely true. Tom and Daisy have grown to see their wealth as a security blanket and now they can’t give it up. The biggest example of this in the book occurs right after Daisy kills Myrtle. Daisy has no idea what to do about what she did so she tries to ignore it. All she knows is wealth, so she retreats to safety and hopes everything will go away.

Daisy has completely neglected her responsibility. She and Tom both act like little irresponsible little children that have no focus in life; only to continue to pamper themselves. Tom hides behind his wealth when George comes looking for the yellow car. He only cares about himself and he knows what George is going to do, yet he sent him to Gatsby anyway. Tom treats George very badly from the beginning and when he doesn’t stop to be helpful now he loses all hopes of ever joining reality and taking on a little responsibility.

Nick primarily takes and jab at society when he makes his statement of the wealthy ‘hiding.’ In the writing of this book Fitzgerald probably took what he saw around him and turned it into a book. Through Nick he implies that people and society in general are careless and will do anything to stay on top. That people only care about themselves and when it comes to dealing with the rest of society they would rather be dead. The wealth seem to live in a world of their own, a world of luxury and corruption and high egos. In the book this world seemed to exsist in Jay Gatsby’s backyard.

All of the wealthy would gather in his yard to have their parties, a place of security surrounded by their own kind, a place where they could forget reality and enjoy a good time. Jay Gatsby seemed to have seen this corruption among the wealthy because he stood apart from this crowd and only watched, probably more out of curiosity and fascination than from a lack of need to ‘party.’ Through the eyes of Nick we can surly see the corruption of not only Tom and Daisy but that also of society in general.

In today’s time we are all taught to take responsibility for ourselves. How ever in the ‘lost generation’ most people have fallen through the cracks and were left to teach themselves their own morals. In The Great Gatsby such a society exists, Tom and Daisy especially have been set out on their own and nobody ever removed their ‘security blanket’ and thus they have become attached to it. Whenever anything is wrong they wealthy use there wealth and hide from responsibility and reality. As did O.J. Simpson in the killing of his wife. If we could all just learn to stand up for ourselves and face the facts then perhaps this ‘could be a better place.’

Responsibility in "The Great Gatsby". (2016, Jun 18). Retrieved from https://studymoose.com/responsibility-in-the-great-gatsby-essay 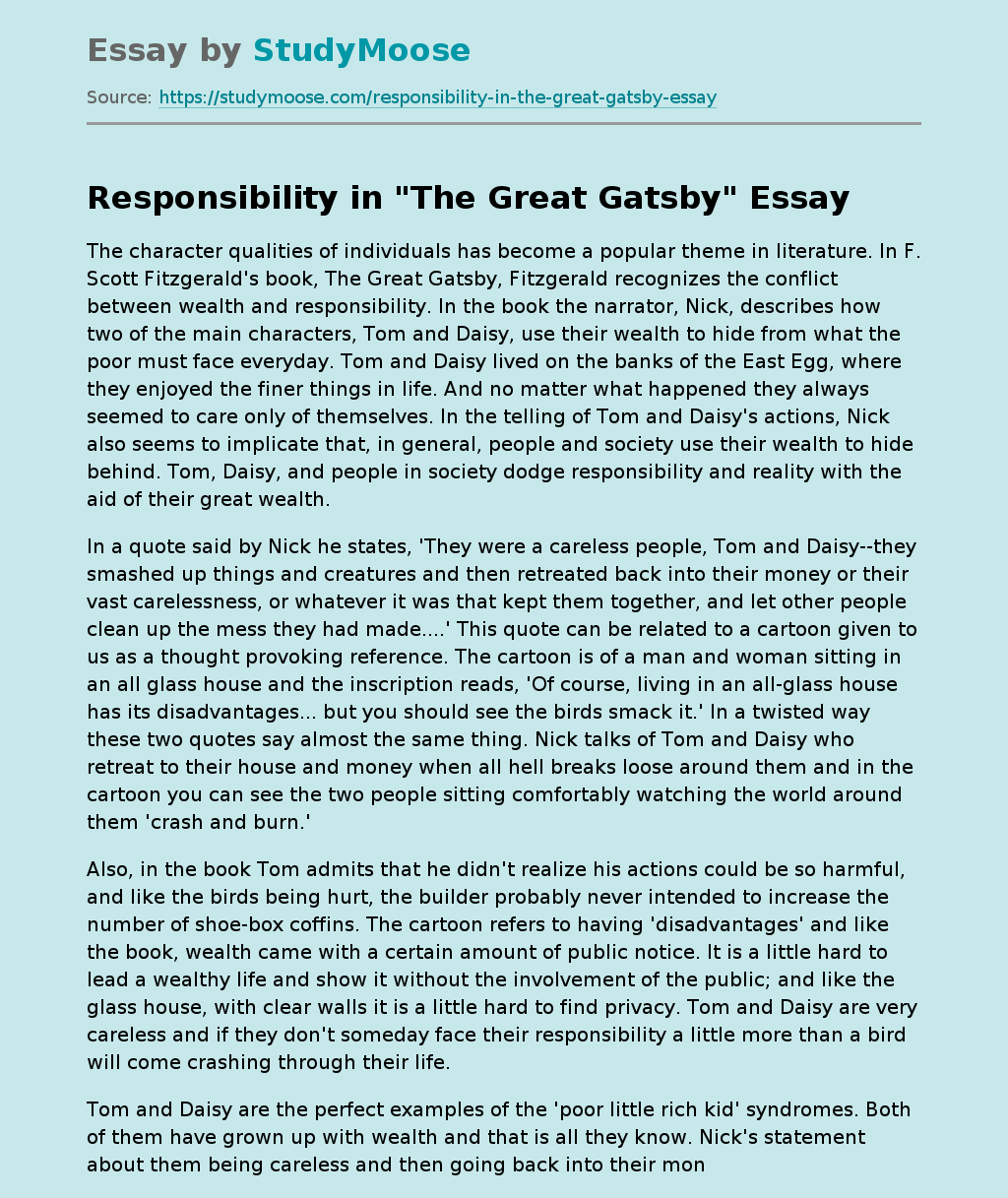