The Idea of Carelessness

In the Great Gatsby, carelessness and the idea of not caring about one’s consequences is strongly presented by the two characters of Tom and Daisy. Fitzgerald presents them as two characters from wealth, old money (unlike Gatsby’s character) and living in East Egg, which Nick’s narration describes to be the better of the two ‘perfectly shaped ovals’. The readers first meet the two characters in Chapter One, and through Nick’s first person modified narrator, we see Tom’s character as one that we shouldn’t like.

Don't use plagiarized sources.
Get Your Custom Essay on The Idea of Carelessness Just from $13,9/Page

Fitzgerald encourages us to look down upon him by mocking his wealth ‘he’d brought down a string of polo ponies from lake forest’. Polo ponies are horses used for playing polo, a classic game often played by the wealthy. Later in the novella, Gatsby introduces Tom’s character as the ‘polo player’ which is very much a condescending way of relating to someone, as if that was their only asset.

Their wealth is also shown by ‘they had spent a year in france for no particular reason’, and this kind of carelessness is highlighted as their decisions are shown to be made just because they can.

The carelessness shown by both characters when they cheat on each other, eg. with Tom showing his mistress off ‘I want you to meet my girl’ or ‘he turned up to popular cafes with her” shows how careless he is about undertaking something so morally wrong. The character’s decisions appear to have no consequences on any other character. When Daisy first meets Gatsby after the years apart, Nick mentions her husband to which she responds ‘who is Tom?’.

This sheer ignorance and faked naivety, “she said innocently” may be perceived as endearing to the reader, but there are underlying tones which hint at how fake her character is by blatantly ignoring the fact that she has a husband and being careless about the consequences which may arise from her meeting up with another man. These consequences also have an impact on Gatsby’s character, as ‘he felt married to her, that was all’, and his ever-growing obsession ‘Gatsby bought that house so that Daisy would be just across the bay’, whereas due to her character’s carelessness, when Gatsby gets murdered, ‘Daisy hadn’t sent a message or a flower’.

Fitzgerald shines a negative light on this kind of behaviour and encourages his readers to see how morally and ethically wrong it is to behave in such a manner, even having Nick’s character say ‘they were careless people – tom and daisy – they smashed up things and creatures and then retreated back to their money and vast carelessness’, which relates back to my first point on money. It is often disputed how Fitzgerald may be hinting at his readers that with money comes carelessness as the two characters can merely escape from their mistakes and the consequences to their actions.

Despite the warning from Jeanie in Goblin Market, Laura’s character is still careless enough to eat the goblin fruit. The idea of free will is highlighted in Rosetti’s poem as it shows the readers that people often disobey rules but later regretting it ‘she dropped a tear more rare than pearl’. Her character is often called ‘curious Laura’ which encourages the reader to see that she is tempted by these mysterious goblin men who tempt her with the ‘fruits’.

As Rosetti used to work to help fallen women, she would have come across women who were tempted and curious by these men which perhaps ended up as their downfall. By being careless, they could have let men take advantage of them, and Rosetti uses Laura as epitomes of these fallen women to show how careless they were. Being a feminist, it is likely that she would have blamed bad men who tempted innocent women, such as Laura and Jeanie, to their downfalls, yet still blaming the girls for being careless as they were tempted by the goblin men.

Using the repetition of the word ‘one’, it shows the reader that there is a vast number of tempting men. Rosetti uses anthropomorphism such as ‘one had a cat’s face, one whisked a tail, one tramped at a rat’s pace’ which could also relate to human characteristics, such as someone who is sly, devilish, etc… In The Convent Threshold, Rosetti presents carelessness through the actions which the narrator and the lover took.

A threshold is when the path splits into two and people have to make a decision, and in this case it could be seen as being sensible and living a pure life as a nun or continue being careless with her lover. The narrator describes her lover as seeing the earthly beauties, such as sex, ‘your eyes look earthward’, which could be interpreted as being careless. Throughout the poem, the narrator describes her internal conflict between sense and carelessness. The voice attempts to persuade her beau to be sensible ‘my livid lips that cry, Repent!

’ but the text is peppered with reminders of their carelessness ‘woe’s me that easy way we went’, implying that being careless is often too easy to be. In The Rime of the Ancient Mariner, the climax of the poem and the ‘event’ which makes the Mariner ‘careless’ is when he kills the albatross ‘I shot the Albatross’. This may also relate back to the concept of free will that God gave us all, and that ‘killeth the pious bird of good omen’ for no evident reason.

This idea of carelessness, just like in the other two texts, is shown by the actions which one’s carelessness and disregard affects other people. Just like in Moby Dick’s Melville, sailor’s good luck creatures are very precious to them and after killing the Albatross which the mariners loved dearly ‘as if it had been a Christian soul’, had dire effects for the rest of the poem. Coleridge uses pathetic fallacy, such as ‘the silence of the sea’ to show that the Mariner’s actions had consequences upon nature itself.

Even the rhythm of the poem alters, and the use of repetition to say the same thing is used ‘down dropt the breeze, the sails dropt down’ gives the poem a slower pace. The mariner’s carelessness is also presented as having a mystical effect, like having creatures come out which walked on water, again with the biblical references to Jesus who is meant to have died for the sins because of humans having free will, ‘yea, slimy things did crawl with legs upon the slimy sea’.

The guilt of doing something so careless could also be seen as physically hung around the Mariner’s neck ‘instead of the cross, the albatross, about my neck was hung’. This is an interesting stanza as the internal rhyme enables Coleridge to start to built up a slight pace to the poem, encouraging us as readers to think that there is still hope and that they are moving in the right direction towards redemption.

The Idea of Carelessness. (2017, Jul 13). Retrieved from https://studymoose.com/the-idea-of-carelessness-essay 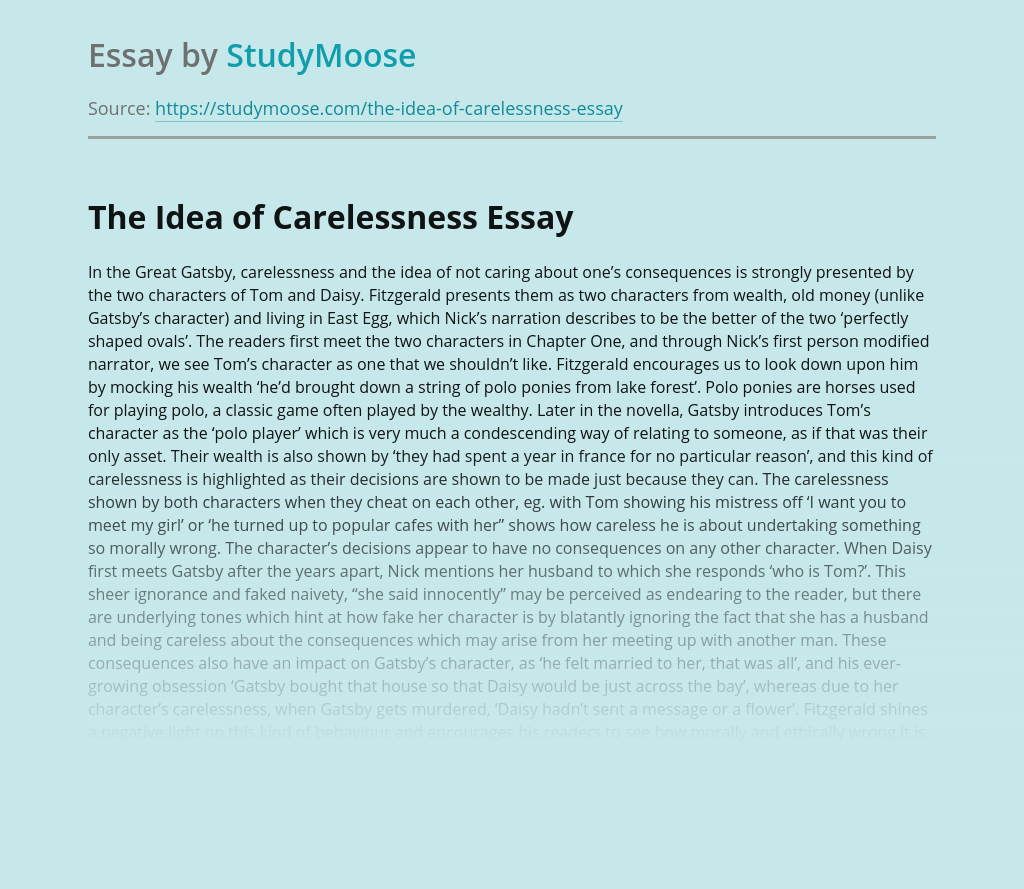 Romanticism and Realism, the two major threads in art and literature in the nineteenth century, both clearly had their roots in the burgeoning industrialism of the world around them. While both strove to show real people and question who was in power, Romanticism did this through the individual and exotic or even supernatural situations, while...

Sinbad the Porter and Sinbad the Sailor Like the 1001 Nights the Sinbad story-cycle has a frame story, which goes as follows: in the days of Haroun al-Rashid, Caliph of Baghdad, a bad porter (one who brings goods for others in the market and throughout the city) pauses to rest on a bench outside eviction...

Get Essay
The State of Nature According to John Locke

The state of nature according to Locke is “a state of perfect flexibility to order their actions and dispose of their belongings and persons as they believe fit … without asking leave or relying on the will of any other guy.” For Locke, the state of nature is where people exist without an established government...

I. Ask questions A. Is John her husband? 1. Is John really a physician? 2. Did John really faint? B. Is Jennie really John’s sister? C. Is Mary really a nanny? D. Does she really have a baby? F. Is mansion really “vacation” home? 1. Did her room really used to be a nursery? 2....

Review of Related Literature and Studies

Parents Portal The Parents Portal gives the parent an opportunity to view their student’s schedules, performance, and statement of accounts. Parents also have access to review current contact information, which may be used to help the school maintain accurate contact data. Online Reporting is the innovative use of media and communication technologies such as emails,...