To kill a Mockingbird by Harper Lee: Idea of Justice

“…in this country our courts are the great levellers, and in our courts all men are created equal.

Don't use plagiarized sources. Get your custom essay on
“ To kill a Mockingbird by Harper Lee: Idea of Justice ”
Get custom paper
NEW! smart matching with writer

” Describe and explain how justice and injustice are represented through events and characters in To Kill a Mockingbird.

Justice, what is right and fair by all of society’s standards and morals, is represented, along with injustice, through events and characters in To Kill a Mockingbird. “…in this country our courts are the great levellers, and in our courts all men are created equal.” (Atticus, pg227). One type of justice is the legal kind, the kind in our courts, where men are found guilty or innocent. The other is any right or just act. “The one thing that doesn’t abide by majority rule is a person’s conscience.” (Atticus, pg116). In To Kill a Mockingbird these justices and injustices are represented through Atticus, Tom Robinson, Arthur ‘Boo’ Radley, and through the prejudices of people.

In essay on to kill a mockingbird Atticus Finch represents the epitome of justice, through his belief in equality.

He has a great belief in the legal system, and a belief that it will be fair and equal to all. “Our courts have their faults, as does any human institution, but in this country our courts are the great levellers, and in our courts all men are created equal. ‘I’m no idealist to believe in the integrity of our courts and in the jury system – that is no ideal to me, it is a living, working reality.

” (Atticus, pgs 226-227). Atticus Finch, a lawyer by profession, has a deep rooted belief that the court system will be just and fair, as that is what it stands for. Atticus is also just in that he is not prejudice; he does not think himself above another man based on skin colour.

“The handful of people in this town who say that fair play is not marked White Only; the handful of people who say a fair trial is for everyone, not just us; the handful of people with enough humility to think, when they look at a negro, there but for the Lord’s kindness am I.” (Miss Maudie, pg261). Miss Maudie shared the same beliefs as Atticus, the belief that everyone is equal. Through Atticus there is also an injustice shown, not in how he treats others, but by how he is treated. “‘Mr Cunningham is basically a good man,’ he [Atticus] said, ‘he just has his blind spots along with the rest of us.’ Jem spoke. ‘Don’t call that a blind spot. He’da killed you last night when he first went there.'” (pg173). Because of his belief that Tom Robinson deserved a fair trial, he was a target for anger, which is an instance of injustice. Atticus shows that treating everyone equally is the right thing to do, and that is justice.

On the other hand, Tom Robinson is a perfect example of injustice. He had a good character, and was a kind-hearted person who got accused, and convicted, of rape because of the basis that he was black. He tried to help Mayella Ewell, but was looked down upon because of this. “‘Yes suh. I felt sorry for her, she seemed to try more’n the rest of ’em -‘ ‘You felt sorry for her, you felt sorry for her?’ Mr Gilmer seemed ready to rise to the ceiling.” (pg218). It was unheard of in the 1930’s white society that this book was set in to have a black man feel sorry for a white woman, and this added to the reason why Tom got convicted. “‘Given,’ said Atticus. ‘Tom Robinson’s a coloured man, Jem. No jury in this part of the world’s going to say, “We think you’re guilty, but not very,” on a charge like that. It was either straight acquittal or nothing.'” (pg242).

Tom was found guilty on the sole account of him being black. As a result of this conviction, Tom gave up hope and lost all reason to live. “Atticus leaned against the refrigerator, pushed up his glasses, and rubbed his eyes. ‘We had such a good chance,’ he said. ‘I told him what I thought, but I couldn’t in truth say that we had more than a good chance. I guess Tom was tired of white men’s chances and preferred to take his own.'” (pg260). Tom couldn’t live with being found guilty of a crime he was innocent of solely based on the fact that he was black, so he decided to try escaping, ultimately resulting in his death. That is one of the greatest injustices shown in To Kill a Mockingbird.

Prejudice, a main theme of To Kill a Mockingbird, is another representation of injustice in the novel. Racism is the most obvious type of prejudice, and this is shown through the trial and the outcome of it. “Well, coming out of the court-house that night Miss Gates was – she was goin’ down the steps in front of us, you musta not seen her – she was talking to Miss Stephanie Crawford. I heard her say that it’s time somebody taught ’em a lesson, they were getting way above themselves, an’ the next thing they think they can do is marry us. Jem, how can you hate Hitler so bad an’ then turn around and be ugly about folks right at home – ?” (Scout, pg272). In the 1930’s, being racist was seen as normal.

Atticus, for example, was seen as unusual because he thought that whites weren’t above blacks. “‘Cry about the simple hell people give other people – without even thinking. Cry about the hell white people give coloured folks, without even stopping to think that they’re people too.'” (Dolphus Raymond, pg222). The prejudice of racism is shown throughout the book, and because of Atticus’ views, Scout begins to see it as unfair and unjust. Another type of prejudice that is briefly touched upon is that of sexual discrimination. “For one thing, Miss Maudie can’t serve on a jury because she’s a woman.’ ‘You mean women in Alabama can’t – ?’ I was indignant.” (Atticus and Scout, pg244). Like racism, sexual discrimination is seen as common practice.

The third type of prejudice is the most basic kind, the kind where one has formed an opinion of something or someone before knowing all the facts, such as what happened with Arthur ‘Boo’ Radley. “Inside the house lived a malevolent phantom. People said he existed but Jem and I had never seen him. People said he went out at night and when the moon was high, and peeped in windows.” (pg9). Jem and Scout had a preconceived idea of what Arthur was like because of what they had heard from other people, but they had never themselves met, or even seen him. The way in which he was seen was unjust; most people would not have accepted him because of their preconceptions. In the end, however, Scout and Jem realise what kind of person Arthur really is. “Atticus was right. One time he said you never really know a man until you stand in his shoes and walk around in them. Just standing on the Radley porch was enough.” (pg308).

Whether or not Arthur getting away with killing Bob Ewell is justice or not is a debatable one. On one hand, Boo was protecting the children, so it was a right deed. “‘I never heard tell that’s against the law for a citizen to do his utmost to prevent a crime from being committed, which is exactly what he did,…” (Heck Tate, pg 304). Arthur is also a solitary creature, so if the fact that he killed Bob Ewell came into light, he would be in the limelight. “To my way of thinkin’, Mr Finch, taking the one man [Arthur] who’s done you and this town a great service an’ dragging him with his shy ways into the limelight – to me, that’s a sin. It’s a sin and I’m not about to have it on my head.

If it were any other man it’d be different. But not this man, Mr Finch.'” (Heck Tate, pg 304). Even Scout seems to understand Heck Tate’s arguments. “‘Well, it’d be sort of like shootin’ a mockingbird, wouldn’t it?'” (Scout, pg304). On the other hand, Boo did kill a man, and according to the law he committed murder, even if it was in self-defence. “…it’s my duty to tell the town all about it and not hush it up.” (Heck Tate, pg304). In either case, the murder of Bob Ewell, and Arthur Radley being let off for it, is an example of justice, whether it is for the good of justice, or for injustice’s sake.

Throughout To Kill a Mockingbird, Atticus, Tom Robinson, his trial and subsequent death, the treatment of Arthur Radley and Bob Ewell’s death, and the prejudice of people, whether it be racial, sexual, or a misconception show the issues of justice, injustice, and how they are represented throughout the novel.

To kill a Mockingbird by Harper Lee: Idea of Justice. (2016, Jul 13). Retrieved from https://studymoose.com/to-kill-a-mockingbird-by-harper-lee-idea-of-justice-essay 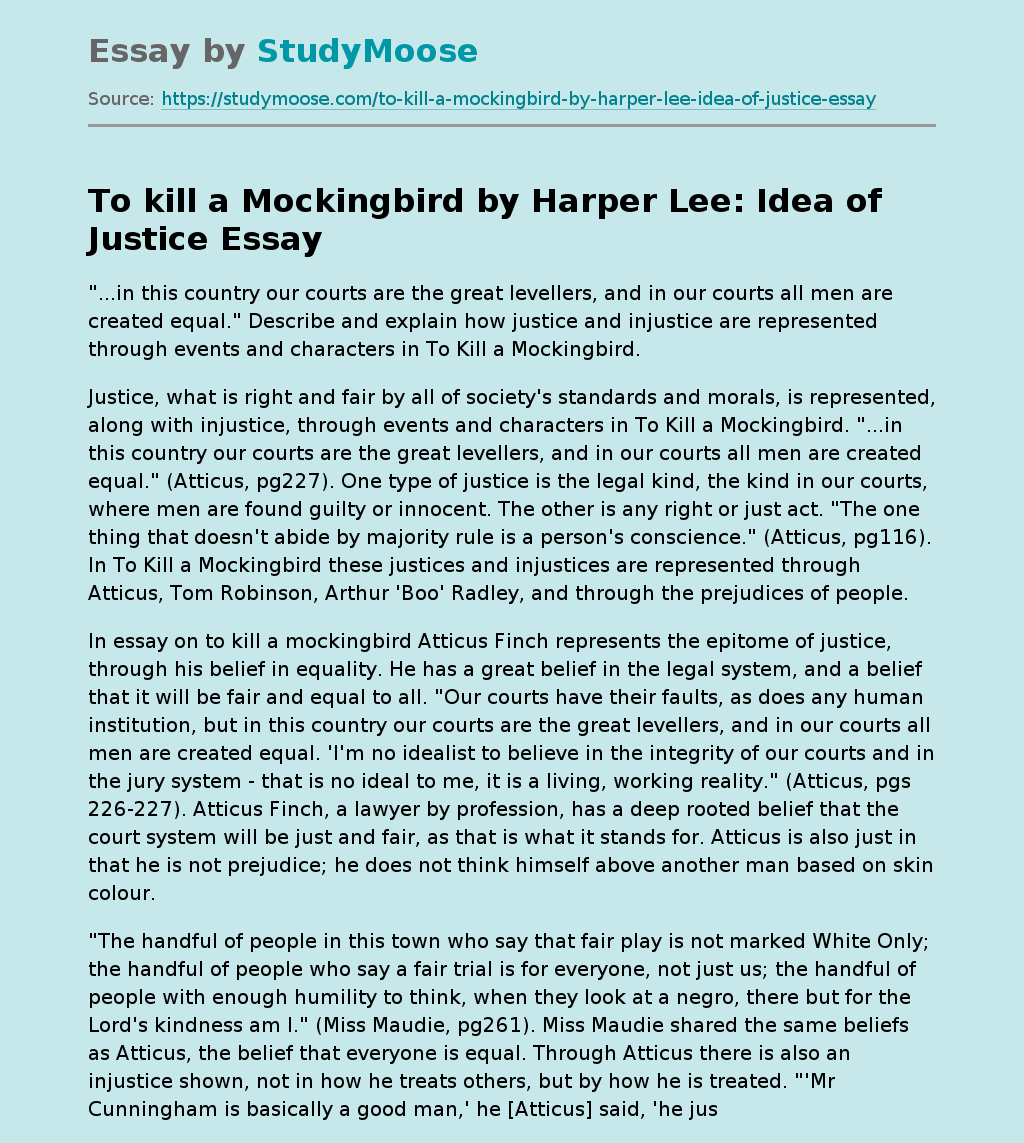