Provincialism in to "Kill A Mockingird"

The 1930s was a time when the U.S. was undergoing major changes. As well as the economic depression which was being felt so sharply; it was the years where clashes between certain ethnic groups occured. The happenings of those days have been reflected upon literature as well. Most of the authors often take racism as their theme, as their main idea. However,”Harper Lee”‘s book, To Kill A Mockingbird, was different than the other books because Harper Lee created the theme of “provincialism” which added great variety to his book.

The book is about a six-year-old called Scout who is reacting to the provincial events in her town, Maycomb County in Southern Alabama. Harper Lee classifies the types of provincialism in three major parts such as; distrust of others who are different, evidence of different levels of society and finally racial intolerance.

Firstly, Harper Lee uses the general attitude of Maycomb people towards some persons who they think are untrustworthy; to show a face of provincialism.

The first example is the town’s perception of Miss Maudie, an old lady whose hobby is to look after her flowers and keep her garden neat. The town thinks that if she went inside the house to read the bible she might have done something better. One day she tells Scout: “Did you know some of them came out of the woods one day and told me that me and my flowers were gonna go to hell, they thought I spent too much time God’s outdoors but not enough time in the house reading the Bible.

”(p.50) The town perceives Mrs. Maudie as a person who has gone mad and yet enforce her to become religious like the rest of the town. The second example is Atticus who the town once saw as their pride but suddenly lost all his dignity by defending a black man in the court.

“I guess it ain’t your fault if Uncle Atticus is a nigger lover besides but it certainly does mortify the rest of the family”(p.89)says Francis to Scout on the night when they are celebrating Christmas. Atticus’s attempt is certainly not approved by the family, the family is now thinking that Atticus has become a stain for their name. The last example is the Radley Family who behaves so badly when considering Maycomb’s own principles. “The Radleys welcome anywhere in town had kept to themselves, a predilection unforgiveable in Maycomb”(p.15) says Scout, pointing out to the town’s pre-judice against the Radleys. Maycomb, being a little town where everything is constant and where people happen to always predict what is waiting ahead of them, has become a boring place. This boring atmosphere of Maycomb leads people to gossip about certain people like the Radleys, like Atticus or like Mrs. Maudie or other people who don’t admire Maycomb’s ways.

Secondly, Harper Lee shows the reader the various socio-economic groups of people in Maycomb as a part of his theme, provincialism. The town has a caste system where slaves and blacks form the group with the least income, living in absolute poverty. The blacks are socially and racially discriminated and live in a totally segregated area. They use different buses, they have their own schools, they don’t have equal rights in the law and they aren’t even allowed to use the same water fountains as whites. They are third class people, briefly. In a conversation about the trial of Tom Robinson, a Negro, Mrs.Merriweather tells Scout the following words: “The cooks and field hands are just are just dissatisfied, but they’re settling down now, they grumbled all next day after the trial.”(p.238) In here Mrs.Merriweather sees the blacks as servants only, as field workers or cooks. That’s what mostly can become from a black person. The second group of people is the farmers whose economic condition is slightly better than the blacks; but having a tough time because of the economic depression.

When Scout wonders if her family is poorer than the Cunninghams, Atticus answers her: “The Cunninghams are country folks, farmers and the crash hit them the hardest.”(p.27) This quote shows the impact of the economic crisis on farmers who are not able to sell the cotton to others. The last groups of people appearing in Maycomb are the educated people and the ladies of the town who spend most of their time sitting and gossiping about the ways of other people. Aunt Alexandra, who comes to stay with Atticus just for a while fits in those ladies very well and becomes a permanent member of all the social activities in Maycomb. She even becomes the secretary of the Maycomb Amanuensis Club.

“To all parties present and participating in the life of the county, Aunt Alexandra was one of the last of her kind; she had river-boat, boarding school manners; let any moral come along and she would uphold it; she was born in the objective case; she was an incurable gossip”(p.135) says Scout, commenting on the things Aunt Alexandra does. Yet, Aunt Alexandra puts down the Cunninghams; “They’re not good folks like us” she says to Scout, telling her that she is a Finch and she should know with which people she should be friends with. Referring to all these, there happens to be a concealed caste system in Maycomb, the wealth of a person is taken greatly into consideration when you are evaluating him, the character and other attributions come after that.

Lastly, Harper Lee uses the discriminatory acts of white people against blacks that create a convenient mood for provincialism. The Maycomb County is a place where people live with their traditions and it contains many ethnic groups. Like most of the other narrow-minded American towns, Maycomb County is where blacks are treated too badly. For instance during the trial of Tom Robinson when Bob Jewell is explaining to the jury what happened on the night, when his daughter, Mayella was raped; he points his finger at Tom Robinson and curses: “I seen that nigger rutting on my Mayella.” (p.179) Bearing in mind the fact that the word “rut” means special excitement time for animals, here Bob Ewell does maybe the most embarrassing thing that can be done to a man. According to the Maycomb people there is no difference between a black person and an animal. Another kind of intolerance we see is implemented on whites who are on the side of blacks; people just like Atticus. After Atticus’s decision about lawing for a nigger is heard all over Maycomb.

“My folks said that your daddy was a disgrace and a nigger ought a hang form the river-tank.”(p.82) shouts out Cecil Jacobs, Scout’s friend from school. Everyone now assumes that Atticus should have gone totally blank and mad by defending a black man. The whites who are with blacks are unfortunately have to face the same struggle as blacks. A white that is with a black is a shame on the white community. The last kind of intolerance is this time coming from a different direction, the isolation of whites from the black community. As it is mentioned before, there is an enormous wall separating these two worlds from each other. A location belongs to either blacks or whites.

Just like whites, blacks want respect for the privacy of their community. For instance when Calpurnia takes Jem and Scout to the black church, the cold air of exposure greets her: “You ain’t got no business bringing white chillun here, they got their church, we got our’n. This is our church, ain’t it Miss Cal.”(p.125), Lula, a black woman, expresses her feelings. This proves that there are two different worlds appearing in the Maycomb County. An individual is belonging to one of those communities. Just like whites blacks always possess a world whose insight is known only to themselves. The Maycomb County is a place where different ethnic groups clash in ideology.

After having examined all these examples, it may be concluded that provincialism has three sides to it; pre-judice against certain people who are standing out of the crowd, the presence of gaps between certain people in wealth and philosophy and lastly intolerance of opposite races and peculiar people. The Maycomb County is a place where people are judged according to the town’s own principles, where a person is placed in a certain category of people among with the ones having similar attributions, and finally a place where races happen to be in challenge. Overall, Harper Lee’s TKAM is a good example of what human-beings can do to each other once they live with provincialism.

Provincialism in to "Kill A Mockingird". (2016, Jun 22). Retrieved from http://studymoose.com/provincialism-in-to-kill-a-mockingird-essay 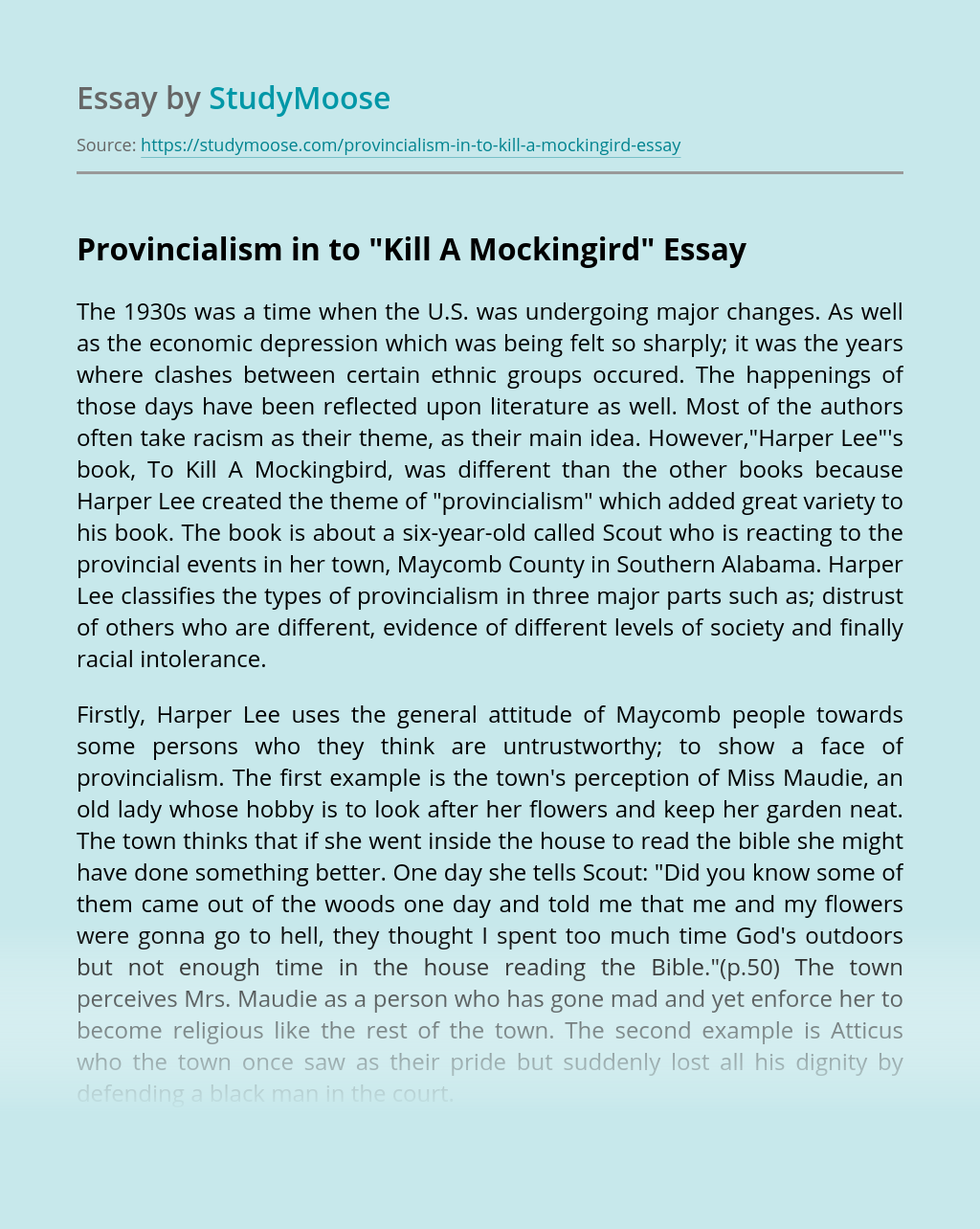 Don’t waste time
Get a verified expert to help you with Provincialism in to “Kill A Mockingird”
Hire verified expert
$35.80 for a 2-page paper
Stay Safe, Stay Original