Women in the novel "To Kill A Mockingbird" by Harper Lee

The Stereotyping of women is common in literature and it is not any different in To Kill A Mockingbird by Harper Lee. The ladies of Maycomb are excellent examples of stereotypical roles women play in a “man’s world. Scout’s observation of the ladies of Maycomb is …”Ladies seemed to live in faint horror of men, seemed unwilling to approve wholeheartedly of …[men].” ” …There was something about…[men] that I instinctively liked…they weren’t—” “Hypocrites,” page 234

The ladies of the missionary circle that the ladies of Maycomb belong to is a stereotypical role for women.

Don't use plagiarized sources. Get your custom essay on
“ Women in the novel “To Kill A Mockingbird” by Harper Lee ”
Get custom paper
NEW! smart matching with writer

They sit around and have a business meeting that involves the discussing of the horrible uncultured and uncivilized communities of the world. They talk about the poor savages and how their beliefs are horrible while they do not scrutinize their own indiscretions. The social part of the meetings are a time for gossip and to give their opinion of what the towns people are doing wrong and how they should change.

This circle of ladies is a stereotype that is pressed upon Scout because of her Aunt’s presence in the Finch home.

Aunt Alexandra role in this novel is to provide a background for Jem and Scout. Aunt Alexandra believes that because the Finch family has land and comes from a line of landowners that have been around for generation that they deserve respect and are on the higher end of the social circle of Maycomb. Aunt Alexandra refuses to be associated with black and the poor.

She treats Calpurnia as the help instead of a member of the family like the rest of the household does. Aunt Alexandra tries her hardest to mold Scout into a lady and she has tried to explain the importance of social standing and background to her as well. But these things to not interest Scout in anyway. She does want to please her Aunty but she also does not want to be confined to one way of thinking and one way of conducting yourself in the world. Aunt Alexandra is viewed as an upstanding citizen and a lady. Aunt Alexandra’s views social standing are a stereotype of women from her time.

While Scout is growing up in a man’s world she is expected to behave like a lady. She has many ladies setting examples for her but they all seem to fall short in the eyes of Scout. Her short list of women who she looks up to in Maycomb is Miss Maudie and Calpurnia. Miss Maudie does not treat Scout as if she is not behaving as a lady should she respects her and her innocence. Miss Maudie treats Scout with great respect and allows Scout to spend time with her in the garden or on the porch.

Miss Maudie, unlike most of the other women on Maycomb, is not a gossip and does not have strong prejudices toward anyone. Calpurnia is the only black person that is Scout relates with on a day-to-day basis. Calpurnia is a well-educated woman and she speaks her mind in the Finch home. She is the mother figure for Scout and a role model that Scout can look up to.

Even thought there are many upstanding ladies in Maycomb Scout has a difficult time in finding ladies that she can relate to or that can relate to her. Her Aunt tries too hard to refine her and the ladies of the missionary circle are hypocrites in Scout’s eyes. Calpurnia and Miss Maudie are the two female role models that best fit Scouts persona.

Aunt Alexandra: Atticus’ sister, Aunt Alexandra is a proper Southern woman who maintains a strict code about with whom she and her family should associate. She criticizes Atticus for letting Scout run wild and when she moves into their home during Tom Robinson’s trial, Alexandra urges Scout to wear dresses and become a proper lady.

Miss Maudie: Miss Maudie is the counterpoint to Aunt Alexandra. A neighbor to the Finch family, Maudie offers Scout a female role model opposite from Alexandra. Maudie respects the children and admires Atticus. Unlike the other women in the town, Aunt Alexandra is a relic of the old South. She holds firm to out-dated beliefs about being a Southern lady. Many 20th century Southern authors have criticized the archaic notion of Southern breeding and the unofficial Southern aristocracy. It is a class of people characterized by subtle racism and class warfare.

Harper Lee uses Aunt Alex to expose what is wrong with the Southern gentility. She believes that by dressing well, using manners, and being social,nshe is a true lady. But Aunt Alex cannot stand up for what is right; she cannot go against old notions. In the novel, it is Scout who becomes the true lady. Scout stands up for what is right and is true to herself and her values. Aunt Alex can be no such person because of her breeding.

Characterization is what ignites a piece of literature and helps it come to life in the mind of the reader. The characters of the novel To Kill A Mockingbird by Harper Lee greatly enhanced the good and evil colors of Maycomb and the people that live their.

Arthur “Boo” Radley is a recluse who never sets foot outside of his house, Arthur grabs the imaginations of Scout, Jem and Dill. He is a powerful symbol of goodness he leaves little presents for Scout and Jem. Boo gives the children many hours of amusement. They reenact his whole life in a play they act out daily. Boo is feared and gossiped about by the town and especially his surrounding neighbors. Boo is not reveled in the novel until the last two chapters, when he save Scout and Jem’s lives. When Scout first notices Boo he is standing in a corner and not moving or saying a word. Scout understands that he is uncomfortable and tries to console him with kindness.

Boo is descried as a thin, tall and “sickly white” man. Throughout the novel Boo is characterized by the people of Maycomb as an evil and mentally unstable man. But when he revels himself to Scout and Jem he is there to help them. Boo is one of this novel’s “mockingbirds”, he is a good person that has been wounded by the evil, gossip, of man. Boo helped bring the main theme of the novel to a better focus for me. He allowed me to change my views on a character mid-book and understand what Lee was trying to bring to light.

Calpurnia is the black maid and nanny of the Finch household. Calpurnia is the only mother figure that Jem and Scout respect and she is able to discipline them with support from their father. Calpurnia is trusted and treated as a member of the family. Even though she is black and working for a white man she is treated with respect by the family and friends. Calpurnia is a well-educated and well-rounded person. She helps Scout to understand the things that are going on around her, she does not treat Scout as a little girl but as an equal mentally. Calpurnia being black and portrayed as the dominate black figure in this novel allows the reader to see that race should not be an issue.

Miss Maudie is the respectable neighbor of the Finch’s and a role model fro Scout. Miss Maudie shows respect toward Jem, Scout and Dill by allowing them to explore in her yard and baking special cakes for them. Miss Maudie takes pride in her flowers and does all of her gardening herself. Time after time Miss Maudie is proven to be a respectable citizen of Maycomb. When the trial of Tom Robison was starting she refused to go to town because she believed that it was just a “Roman carnival” (page 159) and it was not decent to go and watch a man’s life taken away.

Miss Maudie helps the children understand other people and why they believe the way they do, in example the Foot Washing Baptist. Also Miss Maudie give support to Scout when she was being made fun of at the missionary circle meeting. Miss Maudie is a breath of fresh air in this novel of hatred, racism, and stereotypes she allows the reader to believe there is hope.

Women in the novel "To Kill A Mockingbird" by Harper Lee. (2016, Jun 20). Retrieved from https://studymoose.com/women-in-the-novel-to-kill-a-mockingbird-by-harper-lee-essay 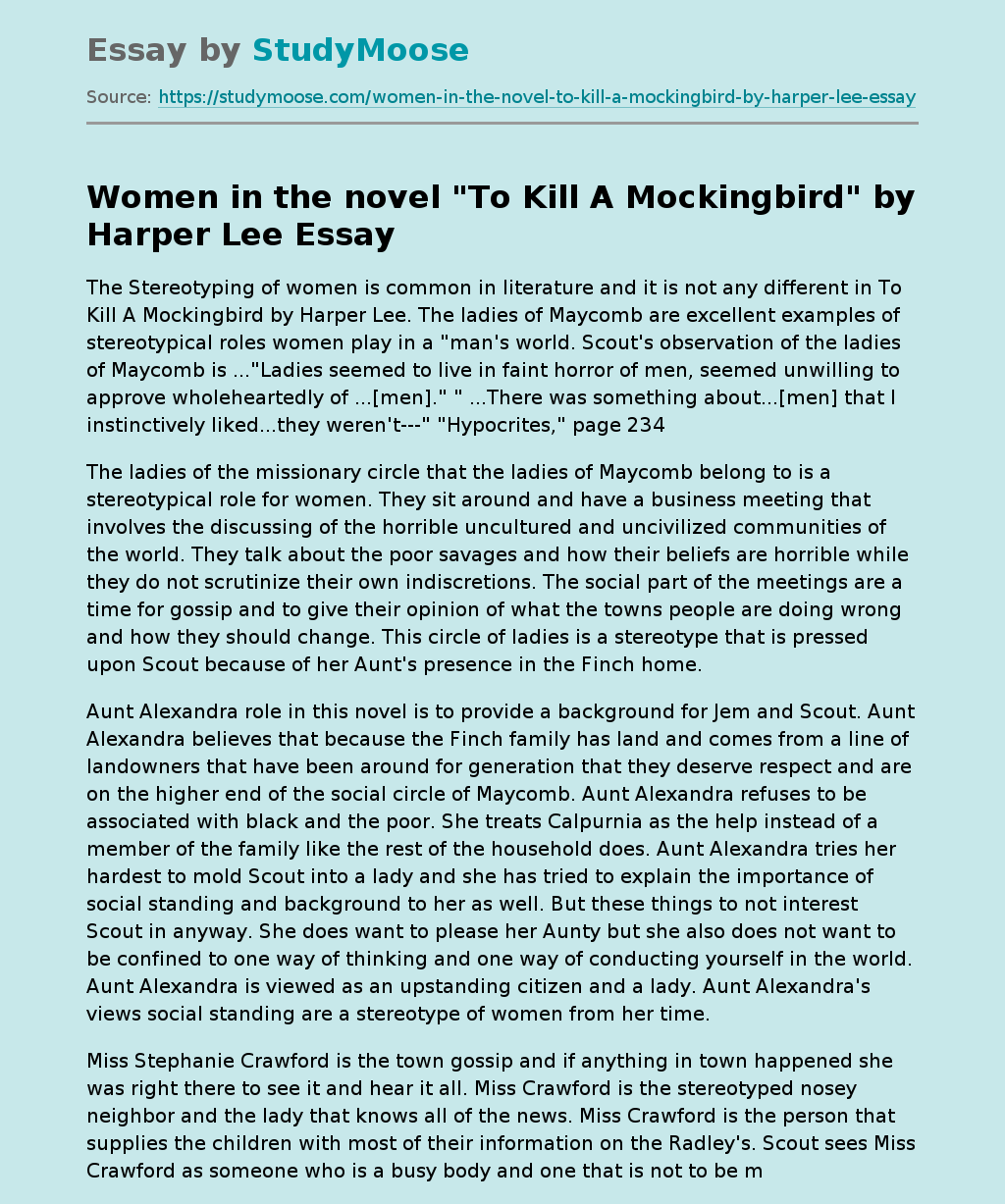