To Kill a Mockingbird by Harper Lee: Scout's Curiosity

Throughout the novel, To Kill a Mockingbird, Scout, the narrator of the story, encounters many adventures in Maycomb, a town full of the disease of prejudice. She shows her curiosity and independence as a child by questioning and wondering about life in her community. Her independence leads her to question many of the prejudiced beliefs in her town, thus setting her in the minority.

Scout’s independence is evidenced by her constant questioning of things around her. Sometimes, she asks questions that are very personal of people that might make them uncomfortable.

Don't use plagiarized sources. Get your custom essay on
“ To Kill a Mockingbird by Harper Lee: Scout’s Curiosity ”
Get custom paper
NEW! smart matching with writer

When a boy named Dill, moves in next door for the summer, she immediately asks him “where his father was” . She studies Dill’s appearance and finds him peculiar and labels him a “curiosity” (7). This is ironic because she calls him a “curiosity” when she is the one that is very curious. At times, her sense of curiosity pays off; such as the time she sees a piece of tinfoil “winking at [her] in the afternoon sun” (33).

Most kids, thinking that it was trash, would just let it be. Scout, on the other hand, reaches up and grabs it while standing on “tiptoe” (33). To her liking, it happens to be gum: Wrigley’s Double Mint to be exact. Scout, her typical curiosity leading her to try most anything, “cram[s] it into [her] mouth” (33) and enjoys it.

Yet, on a broader scale, Scout is always trying to find out about the world around her by reading books and asking questions.

“[She] knew nothing except what [she] gathered from Time magazine and reading everything [she] could lay [her] hands on” (33). She learns a lot from reading, but she also learns about the world by questioning. She always asks Atticus, her father, the meaning of things, such as “nigger-lover” or “rape”; words that she constantly hears throughout the town leading up to the court case. She feels comfortable around Atticus because he believes in equality and because he tells Scout whatever she asks. Atticus feels that children are equal to adults in all aspects.

She also asks questions of Miss Maudie, one of the major feminine influences she has while growing up. One of the people Scout asks about is Arthur “Boo” Radley, the man who lives in a rundown shack down the street. Most people think that he is crazy and are scared of him, but they have never actually seen him. She cannot stop thinking about how Boo looks and acts and ends up trying to find out with the help of Dill and Jem, her brother. The three of them try to get Boo out because Scout is not scared of boo, just curious. Scout, along with Dill and Jem, get in trouble by Atticus for bothering Boo and playing games regarding the Radleys.

Scout’s curiosity is expressed in different, sometimes contrasting, ways. At times, she is totally independent; yet other times she is dependent on Jem or Atticus and always wants to know what is happening around her. She is always wondering where Jem is going, and always ends up following him. For example, she follows him to the court to see the case of Tom Robinson. Meanwhile, when the mob appears at the jailhouse where Atticus is guarding Tom, Scout doesn’t listen to Jem when he “shrieked and tried to catch [her]” (152). She ignores him and runs toward Atticus, demonstrating her independence. An example of how she thinks in the minority is exemplified when she asks Atticus, “Are we going to win it,” (76).

Scout is asking if he will win the case. Most of the people in Maycomb have been taken over by racism, but she belongs to the small group of people that believe in equality within the community. She wants Atticus to win since prejudice has not taken over her mind. She believes in equality, just like her father. Scout’s curiosity leads her to become more independent throughout her childhood yet she still needs the help of Jem and Atticus.

Scout’s curiosity greatly affects many people in Maycomb by questioning their continuing prejudice. When Scout follows Jem and Dill to the jailhouse to see if Atticus is safe, Scout influences Mr. Walter Cunningham, by talking to him. He and the mob that he is with had planned to kill Tom Robinson and maybe even Atticus, but Scout, just a child, stopped them. She runs up and starts making conversation with Walter. This makes “Walter Cunningham stand in [Atticus’] shoes,” (157) and think twice about what he is doing. He then orders the group of men to leave. “It took an eight-year-old child to bring ’em to their senses” (157), Atticus said acrimoniously afterward. She also has a big impact on Boo Radley.

Since Boo always stays inside, he has noticed Scout and Jem trying, hopelessly, to get Boo out. Boo knows exactly what they are up to and where they are at all times. On the night of Halloween, Scout and Jem are attacked by Bob Ewell and Boo saves them. He would not have been able to save them if the kids hadn’t played outside his house. Scout doesn’t know that she influenced him, but she did, along with the help of Jem. In the end, Boo saved their life because of Scout’s curiosity.

Scout’s curious behavior plays an important role in the life of the community, along with her own personality. As a result of this curiosity, she saves the life of Atticus, Tom Robinson, Jem, and herself and she rescues Boo from his lonely life. She has learned to reject prejudices in life, especially toward certain people, such as blacks or Boo Radley. However, the majority of Maycomb has yet to realize the harsh affects of their prejudices.

To Kill a Mockingbird by Harper Lee: Scout's Curiosity. (2016, Jul 09). Retrieved from https://studymoose.com/to-kill-a-mockingbird-by-harper-lee-scouts-curiosity-essay 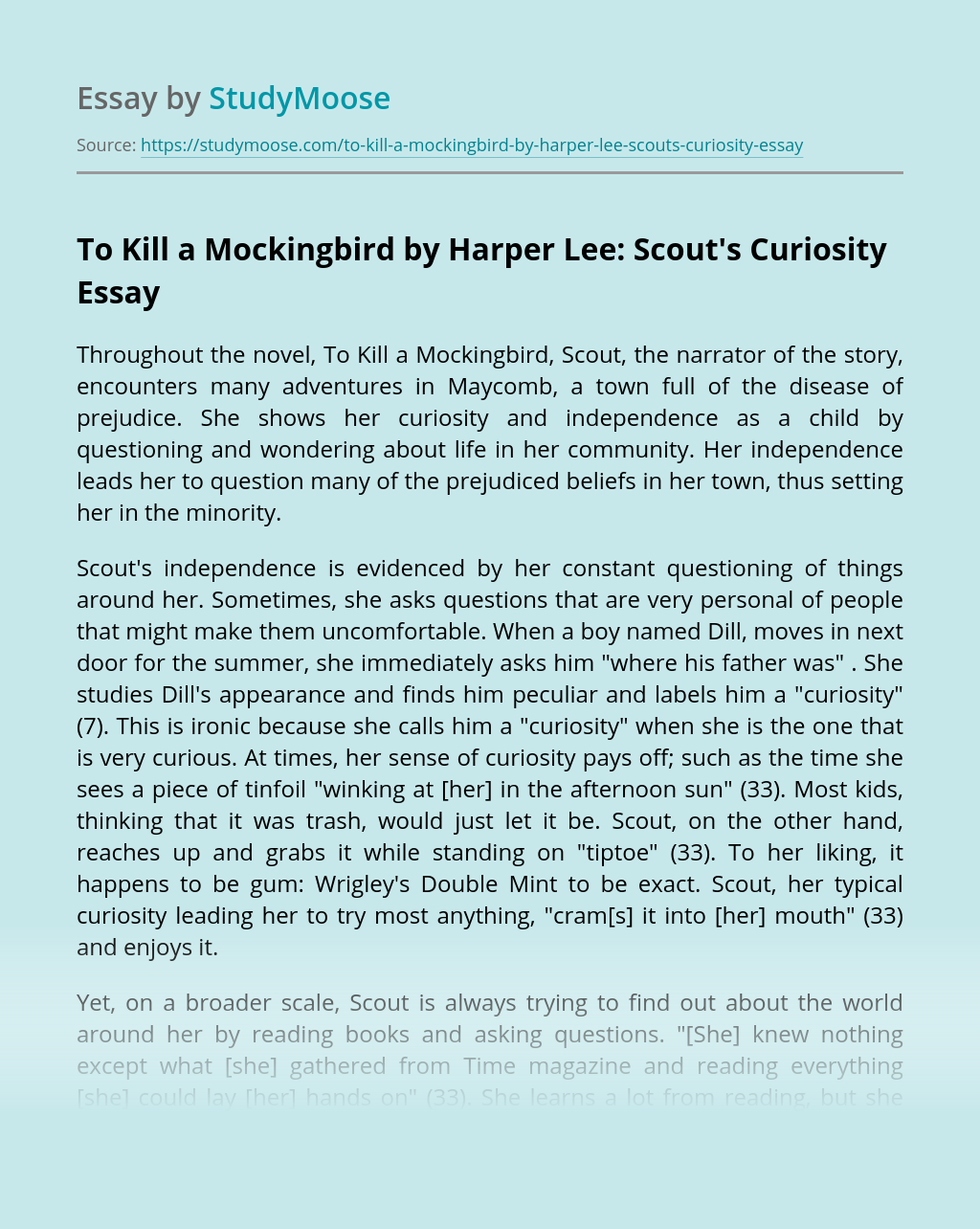