How does Steinbeck present different types of power and powerlessness in ‘’Of Mice and Men’’? In the book ‘’Of Mice and Men’’ Steinbeck uses different types of power and powerlessness to show the personalities of the characters. He uses the idea of power to show difference in all the characters and how their differences change each individual life in the ranch. Steinbeck portrays many strengths and weakness in a wide spectrum. In the pecking order of the ranch, Curley has most power, and is a bully.

Turn in your highest-quality paper
Get a qualified writer to help you with
“ How is the idea of powerlessness shown in ‘Of Mice And Men’? ”
Get high-quality paper
NEW! AI matching with writer

His wife has no identity, and is terribly lonely, but she too hurts others using manipulation. Cruelty and abuse of power characterises most of the novel, with the most noticeable exception of George and Lennie. Lennie shows extreme power in his strength. He is like an animal as it says ‘’snorted’’ and ‘’paws’’. He is portrayed like a bear but shows, although he has the strength to crush Curley’s hand on page 69-71, he has no control of his mind and lacks confidence and has to rely on George such as a domestic animal would towards his owner.

Furthermore he is described as ‘’a huge man…large, pale eyes’’ and also ‘’dragging his feet a little, the way a bear drags his paws’’. Steinbeck uses his physical power to show he is dangerous to the other characters such as Curley’s wife who Lennie kills. Steinbeck shows that when Lennie starts to panic his power gets worse consequently fatal for Curley’s wife. Also he cannot think for himself and crushes Curley’s hand because he is told to by George.

Lennie’s animal characteristics also come through in this chapter ‘’bleated…huge paws’’. Throughout the book Lennie’s actions reflect badly on the dream that the men in the ranch share. He is constantly putting it in jeopardy due to his lack of control and thought towards how his actions reflect on others. The combination of innocence and strength is what really makes Lennie so powerful and dangerous.

Throughout the novel Steinbeck presents the character of Curley’s wife in a number of ways. Initially he tells us that she is a beautiful girl who is lonely and she is the only female on the ranch. Steinbeck explains that she is presented as a sexual object for Curly. Even though she is the boss’s son’s wife, she is still low in the hierarchy within the ranch. She clearly uses her sexuality as a weapon and is seen as a sexual predator. Curley’s wife uses sexual power to get what she wants as a woman in the 1930’s would have little economic or social power and even when as you find out toward the end of the book and the death of Curley’s wife she only acts like this so she can finally have the attention she is missing out on. Unfortunately her sexuality has no impact on the farm because everyone is scared of being friendly or seen with her due to her husband’s power. She is flirtatious ‘‘you guys seen Curly anywhere?’’

She asks this just to be able to enter the stable to be with the men and this is used a decoy to get her to be able to socialise with the men. Steinbeck is giving the reader a negative image of her, almost as a sex slave. We see this negativity in other character’s description of her: She is said to be a ‘’tart’’ and a ‘’tramp’’ by George and Candy. She also wears a lot of make-up: ‘’heavily made up’’ and also dresses up: ‘’cotton house dress…red mules’’. Steinbeck shows her to stand seductively ‘’body thrown forward’’. Lennie who is captured by her sexual nature and states over and over after first meeting her ‘’she’s purty’’. Moreover, during alternate situations she uses her power to manipulate others as she does when in Crooks’ room. She uses the power of being a white female to be racist towards Crooks.

She knows Crooks cannot hurt or say anything against her because of the unfairness and punishment towards blacks, such as in the Scottsboro trial, and uses this to her advantage to take out all the hurt she has been feeling by being ignored on the ranch and only been given attention when she shows her sexuality. She also manipulates Lennie into talking with her by making him feel pity for her by telling him how lonely she feels ‘’I get awful lonely’’ and ‘’I never get to talk to nobody’’. In Of Mice and Men Steinbeck mainly presents Curley as a mean person who wants authority on the ranch. Although this makes Curley a more hated character, Steinbeck makes it clear to the reader that Curley is only mean as a result of being lonely.

This loneliness of Curley was typical of men on ranches in 1930s America. Curley wants to get more authority on the ranch. When we first see Curley, he is described as closing his hands “into fists” and stiffening his back “into a slight crouch” after looking at Lennie, showing the reader that Curley wants more authority over him. This makes the reader feel slightly uneasy as it hints that Curley may do something which will affect George and Lennie’s dream later in the novel. Also by Steinbeck saying that Curley has ‘’tight curly hair’’ it makes me feel he is being presented as an uptight, angry character. Curley feels intimidated by the sheer size of Lennie and feels Lennie is competition that he must beat in order to show his toughness and in case Lennie tries to win over Curley’s wife. Steinbeck also presents Curley as being an aggressive character. For example, Curley is quick to pick a fight with Lennie in Chapter three of the novel. Steinbeck uses words like “slashed” to describe Curley’s strength and aggressiveness.

The reader feels anger towards Curley at this point as he attacks Lennie only because he is bigger in build. Curley is also shown to only use his wife as when she dies Curley does not seem to show any love or respect for his wife as in staying with her when she is found dead or even going to her and his first thought is Lennie. He only shows hatred for Lennie and wants to hurt Lennie. I think Steinbeck made this character to show how others actions and how they react to them can affect a dream or hope you have. For example Curley’s attitude towards Lennie and his wife subsequently leads to neither of them achieving their dream. In conclusion Steinbeck shows power in strength, where you are on the hierarchy and in sexuality of women. Steinbeck represents human nature in the commendable and unfavourable qualities people had during the depression in the 1930’s. Steinbeck shows that human nature changed considerably and mostly for the worse during this period of the great depression. People looked up to and were more frightened of big men such as Lennie and Curley but more critical and abusive towards woman as they thought they were merely sexual objects as Steinbeck shows in the attitude towards Curley’s wife by the ranchers.

How is the idea of powerlessness shown in 'Of Mice And Men'?. (2016, Mar 29). Retrieved from https://studymoose.com/how-is-the-idea-of-powerlessness-shown-in-of-mice-and-men-essay 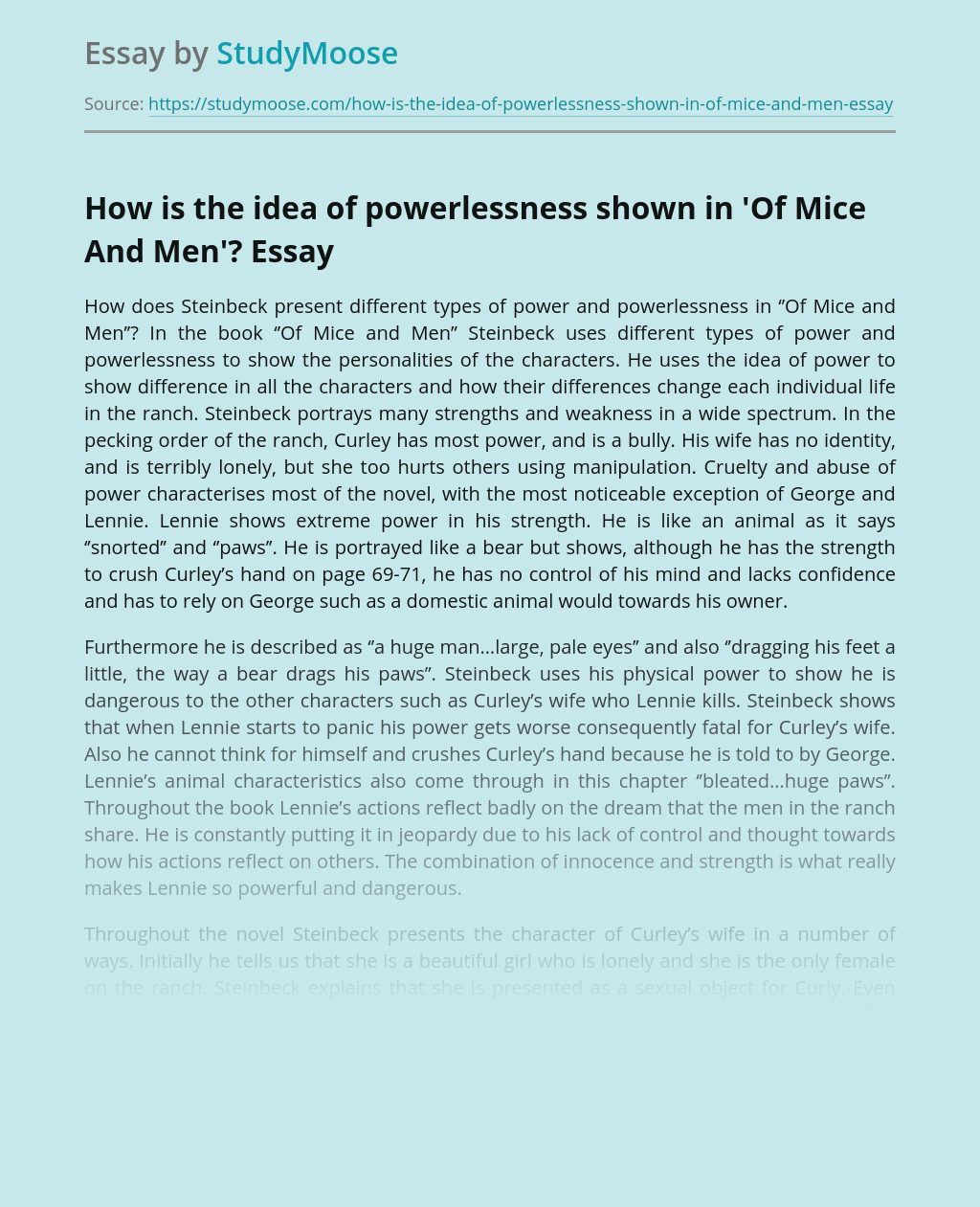 Turn in your highest-quality paper
Get a qualified writer to help you with
“ How is the idea of powerlessness shown in ‘Of Mice And Men’? ”
Get high-quality paper
Helping students since 2015
Stay Safe, Stay Original