Problems Shown in The Gentlemen of The Jungle

Each and every person must take his or her own bit of wisdom from the land of Africa, wisdom scattered generously by Mother-Africa to her children. These were the ancestors, the chiefs, the scholars, the bush men and women, the weak, the strong, and the brave. Let us examine such work of wisdom by Jomo Kenyatta in his short story: “The Getnlemen of The Jungle.” As a Pan-African and great political leader, Kenyatta became the first president of independent Kenya back in 1963.

Don't use plagiarized sources. Get your custom essay on
“ Problems Shown in The Gentlemen of The Jungle ”
Get custom paper
NEW! smart matching with writer

His wise story, pulsate with humor, for all the so called Gentlemen were animals, reminded me, at my first read, of the Africa my grandparents encountered. I had to apply various thinking techniques to enable me pinpoint the main idea of Kenyatta’s theme of the story. For some, the story may look like a funny-tale, however, on the contrary, provided you know the history of colonial Africa, it provides some hidden facts, an answer to how Europeans colonized the continent.

“Once upon a time an elephant made a friendship with a man. One day a heavy thunderstorm broke out, the elephant went to his friend, who had a little hut at the edge of the forest, and said: “My dear good man, will you please let me put my trunk inside your hut to keep it out of this torrential rain? “

We can easily visualize the normal form of mutual relationship the elephant requested from his friend in the above passage, who, in this case, happened to be a human being.

Such was the request of Europeans when they first came to Africa. They came as missionaries, and later, traders. They were eager to reside along with the African people, although their experiences, culture and beliefs were in total contrast with that of the African people. Obviously, the concept of an elephant and a man presented here was to give us a hidden message, and thus somewhat an anecdote of reality.

“The man, seeing what situation his friend was in, replied: “My dear good elephant, my hut is very small, but there is room for your trunk and myself. Please put your trunk in gently.”

Such generosity was enacted to Europeans in colonial Africa. They were given seats, even lands, to exercise their mission. An example of such action was in the Gold Coast, now Ghana, when the then native kings and chiefs allowed European settlers to build churches, court-houses, castles, prisons, and other institutions of the state, which, in fact, were all new to the African experience at that time.

“But what followed? As soon as the elephant put his trunk inside the hut, slowly he pushed his head inside, and finally flung the man out in the rain, and then lay down comfortably inside his friend’s hut……the man, seeing what his friend had done to him, started to grumble; the animals in the nearby forest heard the noise and came to see what was the matter.”

Let’s face it. The Europeans who came to Africa as good friends later deprived the African people of their rights. From then emerged an atmosphere of total dissatisfaction and frustration of colonial rule. The Africans felt betrayed, just like the elephant’s friend, as seen above. The same sense of dissatisfaction and betrayal ignited many African scholars abroad to return home and fight for independence, and for the total liberation of all Africa. For example, Kwame Nkrumah made his voice clear to the whole world on his notion of “self government now” against the British control of the Gold Coast. Of course, many politicians the world over recognized his cry on behalf of the whole African population.

“In this turmoil the lion came along roaring, and said in a laud voice: “Don’t you all know that I am the King of the Jungle! How dare anyone disturb the peace of my kingdom?…..The elephant, obeying the command of his master, got busy with other ministers to appoint the Commission of Enquiry……On seeing the personnel, the man protested and asked if it was not necessary to include in this Commission a member from his side. But he was told that it was impossible, since no one from his side was well enough educated to understand the intricacy of jungle law.”

Indeed, bitter it was seeing the entire African continent under the control of Europeans. It was during this time that they forced their own form of barbaric system of law and order upon the natives of the land, and then came a time of intense political and intellectual changes in Africa. However, for the Europeans, it was a time of consolidation, during which they attempted to build up more effective colonial administrations. By doing so, they set up various institutions of the state within which the Africans were barely appointed as civil servants solely because they were doomed as incompetent, or, more plainly, uncivilized. Like the lion, the head of each and every colonial administration at that time was the Governor, who was always chosen by the Europeans without any consent, whatsoever, of the African people.

Furthermore in the story, the Commission of Enquiry ( from which Rt. Hon. Mr. Fox acted as chireman, and Mr. Leopard as Secretary ) came up with a verdict against the man, saying:

“Mr. Elephant shall continue his occupation of your hut, but we give you permission to look for a site where you can build another hut more suited to your needs, and we will see that you are well protected.”

Undoubtedly, the above metaphor well fits in with European control of lands in colonial Africa. For example, during the apartheid system in South Africa, “The Group Area Act” law was passed in order to force people of certain races, especially Africans, to live in designated areas. These areas were mostly bad in terms of agricultural activities and vulnerable in terms of natural disaster. And as I write, the current government of Zimbabwe is in choas due to its barbaric tactics against certain White-land-owners in the country: perhaps all in an effort to heal that portion of colonial wounds.

“But no sooner had he, the man, built another hut than Mr. Rhinoceros charged in with his horn lowered and ordered the man to quit. A royal Commission was again appointed to look into the matter, and the same finding was given……Then the man decided that he must adopt an effective method of protection, since Commissions of Enquiry did not seem to be of any use to him. He sat down and said: “Ng’enda thi ndagaga motigi,” which literally means, “there is nothing that treads on the earth that cannot be trapped,” or in other words, ” you can fool people for a time, but not forever.”

In the end, all the animals, so called Gentlemen of The Jungle, were burned to death when they occupied a larger hut the man created in order to trap them.

The 1950s was a time of massive political and social changes in Africa, for Africans were implementing new ways of escaping the umbrella of European occupation. Unlike other colonial powers like Portugal and France, Britain reckoned that running the empire was more trouble than it was worth. Moreover, a number of African scholars increasingly push their demand for self-rule or de-colonization. Step by step, shoulder to shoulder, the people of Africa came together as members of one destiny and the struggle for independence was born. The abolition of the “aparthied” system in South Africa in 1994 (upon which Nelson Mandela became the first black president) marked a symbolic end of oppression, segregation, and racial discrimination on the African continent.

With this, we can all affirm that “Europeans fooled Africans for a time, but not forever!”

Problems Shown in The Gentlemen of The Jungle. (2016, Jun 24). Retrieved from https://studymoose.com/problems-shown-in-the-gentlemen-of-the-jungle-essay 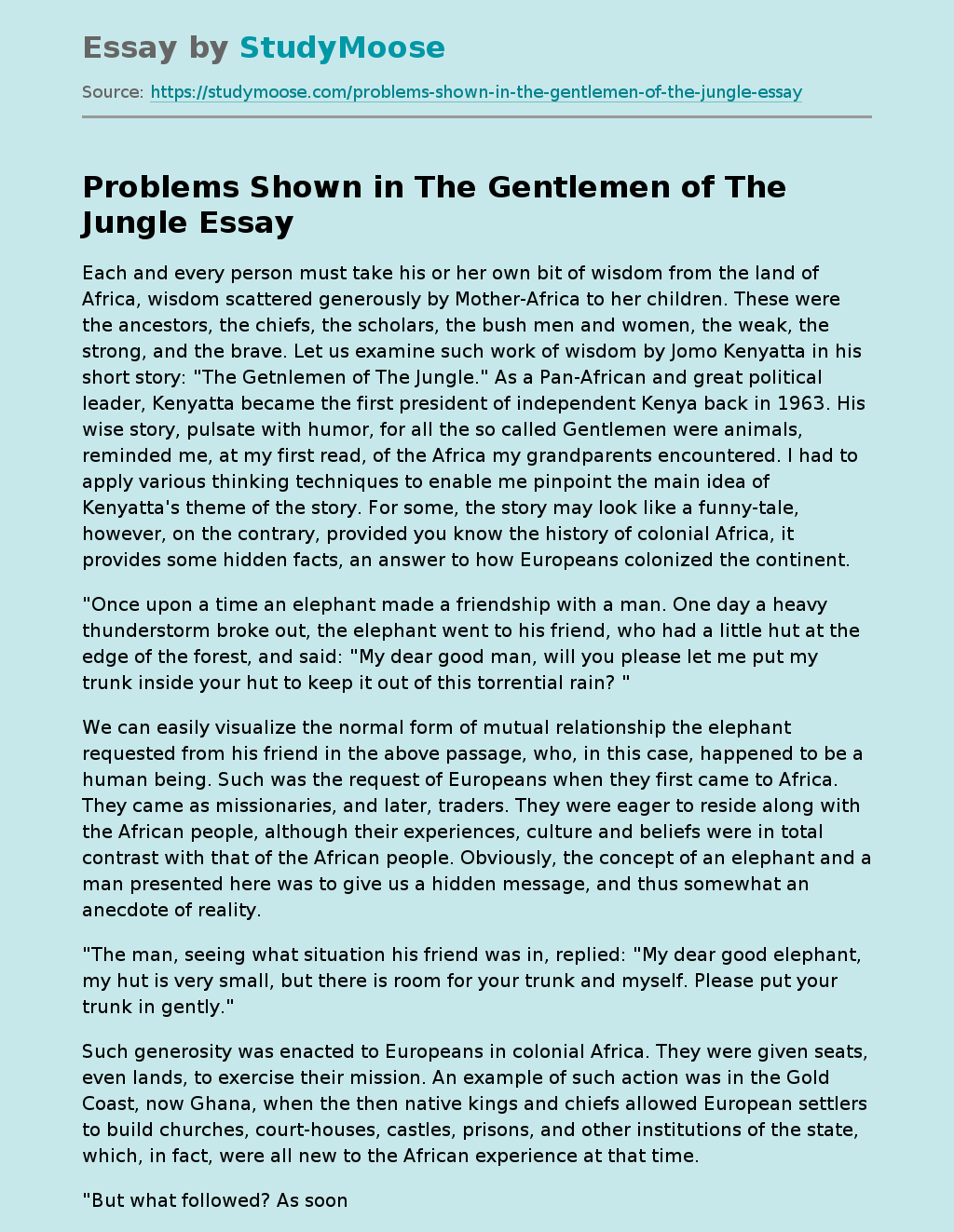