Education of Mowgli in The Jungle Book

In The Jungle Books, Mowgli is a prime example of how education is the most important tool in society, and like any other tool, it can only be beneficial when used correctly. Mowgli shows that in order to survive in society, a child needs the education of his society and he needs it early on. A child needs to be educated about his society right away so that he may begin to thrive in his society. So it is Mowgli that proves that it is impossible to survive in any society without an appropriate education early in childhood.

Don't use plagiarized sources. Get your custom essay on
“ Education of Mowgli in The Jungle Book ”
Get custom paper
NEW! smart matching with writer

The education that Mowgli receives, and his use of it, is parallel to how a civilized education will help a child survive in society. Mowgli is taught all he needs to know in order to survive in the jungle. First off he learns the law of the jungle, which is like a child learning the rules of society. Before a child can speak he is being scolded, and taught what is acceptable and what is not acceptable in the society he lives in.

Like a child told not to draw on the walls, or not to walk in the house with shoes on, Mowgli is taught what animals he is allowed to hunt, and in what areas. It could be said that the the word society should not be used to describe the jungle since the definition of society is all the people; human beings living together as a group.

However a further definition is an organized community of animals or insects.

The jungle is Mowglis society and he is forced to be educated by the natural citizens of the jungle in order to survive, just as a child must be educated by the society he lives in so that he can survive in his society. A child must be taught early on how to survive in society in order to get by. It is seen that Since at least the early 1800s, the U.S. has seen education as the ticket to success, especially for poor and working-class children. (Business Week; New York; August 26, 2002; Alexandra Starr.) For someone who isnt born into money or or any other form of protection in society, education is the only way for that person to survive. Just like Mowgli isnt born with sharp teeth or strength, he needs to rely on his education for survival.

We know that without an education, one can not get very far, one can hardly even enter the working world, which in our economically driven culture, is the central focus of society. Mowgli needs his education in order to not be killed in the jungle. Just staying alive is the center of his society. Without his early education from Baloo he never would have survived, nonetheless, conquered Shere-Khan. It is essential that Mowgli received his education early on. It turns out that starting an education even at age 5 or 6 is too late. Children form basic cognitive abilities in their earliest years, and those who don’t get exposed to letters, numbers, and social skills at home quickly lag behind those who do. (Business Week; New York; August 26, 2002; Alexandra Starr.) The townspeople couldnt have moved into the jungle and survived because they werent given a jungle education. Mowgli had began his education in the jungle much later his chances of survival would have greatly decreased.

Mowgli is not only offered the best education in the jungle, but he chooses to use it to the best of his ability. He knows that this education is not to be taken for granted, but rather used towards his advantage or else he will die. Mowgli knows that he doesnt have any other protection against the dangers of the jungle accept for his education. In other words, without education one cannot survive in society. Mowgli proves that an education will help one succeed exceptionally in society because of how he quickly climbed the ladder of respect after he received his education of the jungle.

Although all the other animals have some education, none have the prime education Mowgli received, and because of this he is admired by some of the less educated animals in the jungle. Some of the more unlawful animals, such as the monkeys, represent less educated people in society. Although they have communication among their kind, they have no laws, or structure and therefore they are ostracized in the jungle. They are looked down upon for being so unstructured, and for refusing to follow the laws of the jungle. The monkeys have a great disadvantage among the jungle society since they are much less educated. The only reason they survive is because they live high in the trees. It might be said the not all of the uneducated animals are ostracized for being uneducated.

However, the other less educated animals know at least the rules of the jungle, and therefore they are accepted since they follow the rules. They use the education that they did receive in order to survive in the best way they know how. Since these animals have other protection, such as claws, armor, or strength, they do not need to know all the languages of the jungle to survive, they need only know the laws that they must follow. All of the other animals use their education of jungle law and their own natural protection, let it be the ability to fly, or camouflage, or poison, to survive in the jungle. Mowgli however doesnt have any physical natural protection. All he has is his education and his ability to comprehend and think.

Not only does he follow the laws of the jungle, but he speaks all the languages of the jungle in order to help him survive. When entering a part of the jungle where animals dont know him, he tells them in their own language that he does not mean any harm. We be of one blood, ye and I. (The Jungle Books, pg. 24) He uses this skill of language to get by in the jungle without being killed. The only animal of the jungle who is out to get Mowgli is Shere-Khan, and even he is outwitted by Mowglis intelligence in the end. Mowgli uses more than just his jungle education to kill Shere-Khan, he takes advantage of his instinct for planning and coordinating in order to get rid of Shere-Khan. Because he makes use of his skills he ends up on top.

Mowgli is a prime example of how a child can optimize his survival chances just by exercising his education. Although Mowgli is not the perfect student (even he puts up fights during lessons) he does put time into what he is learning. Baloo will not allow him fail his lessons. In other words, Baloo will not let Mowgli die. Baloo even says that it is Better he should be bruised from head to foot by me who love him than he should come to harm through ignorance. (The Jungle Books, pg. 23) Mowgli shows how a child can use his education in order to get ahead in society. Mowgli not only uses his education for survival, but he uses it to help regain leadership of the wolf tribe, and to kill Shere-Khan. This is a perfect example of how a child in modern society can either choose to use his education to move up in society, or choose to waste the tool of education handed to him and go nowhere in society. Baloo shows how sometimes children need to be forced to realize the importance of their education. If a child is allowed to slack in school, or is not offered help, he will not be able to go far in society. He may survive but not by much. A child needs to realize that education equals survival early on. If Baloo did not force Mowgli to learn what he needed to know Mowgli could not have survived, however, if Mowgli did not understand the importance of this education he would not have survived either. If Mowgli did not know how to exert the skills he learned his education would have meant nothing. It is the fact that he knows when and how to use the skills Baloo taught him that allows him to survive in the jungle.

Mowglis primitive education is used as an example of how education is needed to survive in any society, even uncivilized ones. One might think a child raised by wolves could never live in the jungle, but Mowgli proves that with the appropriate education even the weakest can survive. Mowglis mode for survival in the jungle parallels a child’s road to survival in society and his steps towards education is identical to how a child is educated in society. It is this link between jungle and society that proves that education is required for survival no matter what level of civilization. Mowgli exemplifies how an individual can succeed in any environment when he has the proper education and applies his skills appropriately.

Education of Mowgli in The Jungle Book. (2021, Dec 07). Retrieved from https://studymoose.com/education-of-mowgli-in-the-jungle-book-essay 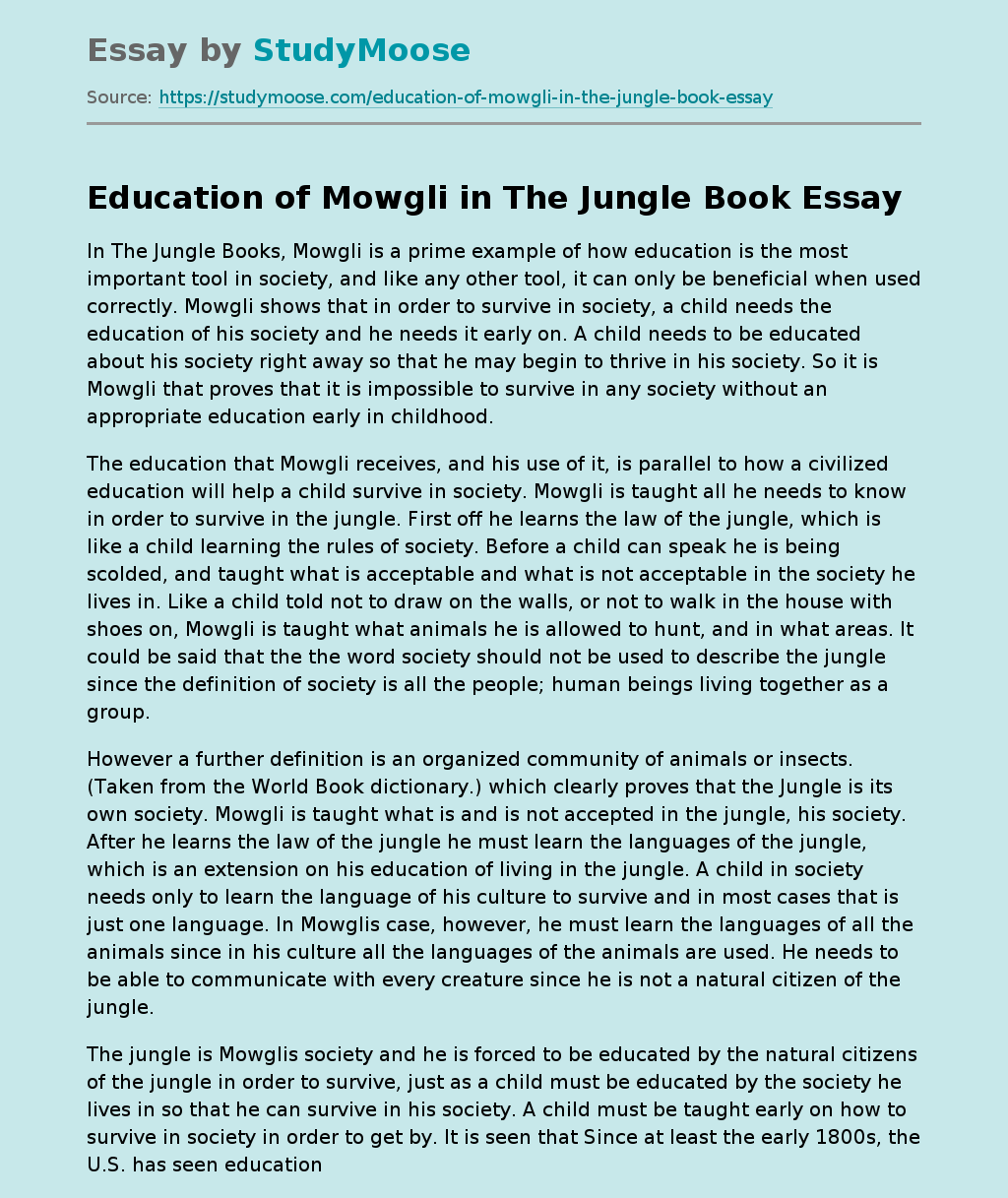