Upton’s Sinclair’s The Jungle was a novel based on one employee who worked for a Chicago’s meat-packing factory. This detailed novel described horrendous conditions and gruesome visions of contaminated meat. This brought forth significant changes within the meat-packing industry. America’s business of canned meat was declining within the country as well as the world. Lack of trust and controversy surrounding the meat-industry caused President Roosevelt and Congress to take initiative of the situation. This began a series of events which eventually developed the Pure Food and Drug Administration Act.

Don't use plagiarized sources. Get your custom essay on
“ Analysis of Upton Sinclair’s Novel The Jungle ”
Get custom paper
NEW! smart matching with writer

Upton Sinclair’s novel described the daily routines of the meat-packing industry. Poisoned carcasses are only the lighter half of what was occurring within the factories in Chicago. Jurgis was an employee of a factory in which Sinclair described. Sinclair gave a detailed description of specific conditions. An example is how employees cleaned their hands with water that was also used for the sausages. There was also the meat left on the floor with saw dust and spit which was grounded up and caned for consumers to purchase.

Eventually they extracted the bone and created a hole that was inserted with a “white-hot iron” and after that, the Number Three Grade meat was now known as the Number One Grade meat.

Once this idea was used, there was no longer the separation of Number one, two or three meats; they eventually just became Number One Grade meat. Nicknames for types of meat were the “boneless hams” which included any type of pork used; the “California hams” consisted of the shoulder and joints grounded up with barely any part of the hog meat included and the “skinned hams” which were the older hogs. There was also the infestation of rats which were a result of a leaky roof. The roof dripped upon the carcasses attracting the rats which invested the meat and were also processed and sold to consumers.

Poisoned breads that were to kill the rats were part of the daily supplement of meat as well. Those who worked in the factory also suffered. Some had cuts, others lost limbs and the ultimate was their lives, and when occurred would also be processed with the meat. Those who fell in the vats were overlooked and would be sent off passing through inspections. Government inspectors would socialize and not pay attention at what was passing by. What was invested in the meat would eventually be consumed by the public. When the public was informed of what occurred in the factories, creation of strict laws was going to be taken in effect.

Upon the release of The Jungle, President Roosevelt took immediate action. The Neill -Reynolds meat inspection report was a result of inspections among factories in which Roosevelt stated as being “revolting” . Roosevelt threatened meat-packing factories stating he would release the report if the packers did not take action and change their conditions. Packers feared that this would destroy the packing industry. In fact, President Roosevelt was contacted by the President of the American National Livestock Association asking for “adequate inspection legislation” . Where as Judge Sam H. Crown representing both the National Livestock Association and the Texas Cattle Association in which he asked for a bill for a compromise to take into affect. This was to restore faith among the packers that the meat industry would not diminish. Part of the compromise entails the cattle raisers to pay the cost of the inspection for live animals and the packers to pay the cost of inspection the carcasses and canned products.

Unions also participated with investigations. In Brooklyn union workers were sent undercover to non-union shops. These shops consisted of unskilled, low waging employees. The union officials stated “men do not leave their costs for the entire time they work, and are given to uncleanly practices” . However, in Upton Sinclair’s novel, Jurgis (the employee) mentions the packers, of course had spied in all the unions, and in addition made a practice of buying up a certain number of union officials…so every week they received reports as to what was going on Investigators began to inspect the Chicago’s meat packing industry because of the business they had with foreign countries. The novel by Sinclair brought concern not only among Americans rather the world, primarily London.

Consumers began to stop purchasing canned meat from America. In London, newspapers informed the public of the meat-packing industries’ methods. The entire United Kingdom boycotted any canned meat including roast beef and corned beef. The residents of London forbid consuming any type of meat product “shipped from Chicago… (since it’s not) fit to put in human stomachs” . A family from Fort Smith, Arkansas was poisoned by a bologna sausage and as a result the father and the three children died. The distrust of American factories brought London to seek towards Australians and New Zealand to take over America’s place in the meat-packing industry. The Chicago’s meat-packing industries cause an immense distrust with the English. It was not only London who was concerned rather sailors amount Atlantic Fleet battleship refused to consume any type of canned meat. One sailor stated in order for anyone to eat the can meat it will take “mightily fine cook to make it palatable” . This was referring to killing any bacteria themselves due to Chicago factories’ carelessness.

The president of the New York Board of Health investigated factories for himself and concluded that the meat factories were sanitary and to not cause alarm. Dr. Darline defended the process of coloring frankfurters stating “a little aniline to give frankfurters the same color would not be harmful”. Sinclair’s novel contradicts what Dr. Darline is stating. In his novel, meat was spoiled and chemicals were able to diminish the odor and the coloring would enhance the meat. Dr. Darline is correct in which the coloring is not harmful, however the reasons as to why it was colored could be harmful. Dr. Darline claims to have the best Health Department yet Sinclair’s novel mentioned otherwise. Employees of the factories stayed past 5:00pm in which they took animals unfit and processed them without many being informed and the contaminated meat “could not be identified”.

Even with the best Health Department, they would not be aware if the meat was contaminated with the naked eye. Another significant detail regarding Dr. Darline’s investigation is how his study was biased because the factories were aware of the investigation prior to Dr. Darline’s visit. Dr. Darline believed there was nothing wrong with the factories, that they were sanitary. However, in Indianapolis forty-nine meat samples were tested. Meats such as bologna, steak, veal, pigs-foot and more were examined. Out of the forty-nine samples, thirty-three were contaminated with chemicals and found among market stands for consumers to purchase. In Kentucky, the Cudahy Plant shut down due to their contaminated meat which was released by newspapers and magazines. Sixty percent of the meat produced by Cudahy factory was used in Louisville, Kentucky which nearby hotels and restaurants would have been affected by the shutdown.

The Americans themselves were writing to the editors of the New York Times, giving their ideas as to what to do. An anonymous individual believed Congress should develop a law forcing not only meat and beef packers, but should include any involvement with the Inter-State food business. It also stated that a license should be in effect and should only be granted by the Federal Court. Ernest H. Crosby was another gentleman writing to the editor of the New York Times and advised to stop eating meat altogether. Crosby believed meat to be unnecessary and can be supplemented by products with protein, such as “cereal, eggs, wheat bread, peas & beans” . Ernest H. Crosby was one out of many who thought taking meat out of their diet was a solution.

President Roosevelt demanded for the meat-packing industry to make significant changes in which he gave them an ultimatum. Roosevelt threatened the industry that a copy of the Neill-Reynolds meat inspection report was to be published if they did not change the entire industry bringing forth trust among the consumers. Neill and Reynolds were appointed by the President himself to inspect the factories and give a detailed description of what they found. In a speech to the House of Representatives and the Senate, President Roosevelt states:

The conditions shown by even this short inspection to exist in the Chicago stock yards are revolting. It is imperatively necessary,in the interest of health and decency, that they should be radically changed…Before I had received the report…I had directed that labels placed upon any package of meat food products should state only the carcass of the animal from which the meat was taken had been inspected at the time of slaughter. If inspection of meat food products at all sates of preparation is not secured by the passage of the legislation recommend, I shall feel compelled to order that inspection labels and certificates on canned products should not be used hereafter.

In June 1906, Congress passed the Food and Drugs Act. This provided consumer protection and made it illegal to sell any type of contaminated food throughout the nation. The bill contained a compromise among the packers as well as President Roosevelt. The document itself consisted of five main points. The first point was the right for labels to be accurate which included the date of its inspection. The second point was the expenses of inspection would be paid by the Government. The third main point was the “waiver of the civil service requirement so the Secretary of Agriculture could appoint Inspectors as he pleased” . The fourth point was the “right to withdraw inspection from any plant falling to comply with the rules and regulations of the Secretary with regard to the destruction of diseased or condemned carcasses” . The final point of the document was that “in the judgment of the Secretary of Agriculture” would decide the passing or rejection of meat.

The Food and Drug Act of 1906 is a significant document. It informed the nation as well as the world that it was safe to buy canned products from America. The horrendous, detailed description of what occurred in the meat-packing factory of Chicago took trust away from the consumers and instilled fear. Consumers were not aware of the actual ingredients within the canned meat, surprisingly everything but the actually meat was processed. The Food and Drug Act protects consumers from what Upton Sinclair’s novel entailed, restoring faith among America’s meat-packing industry. 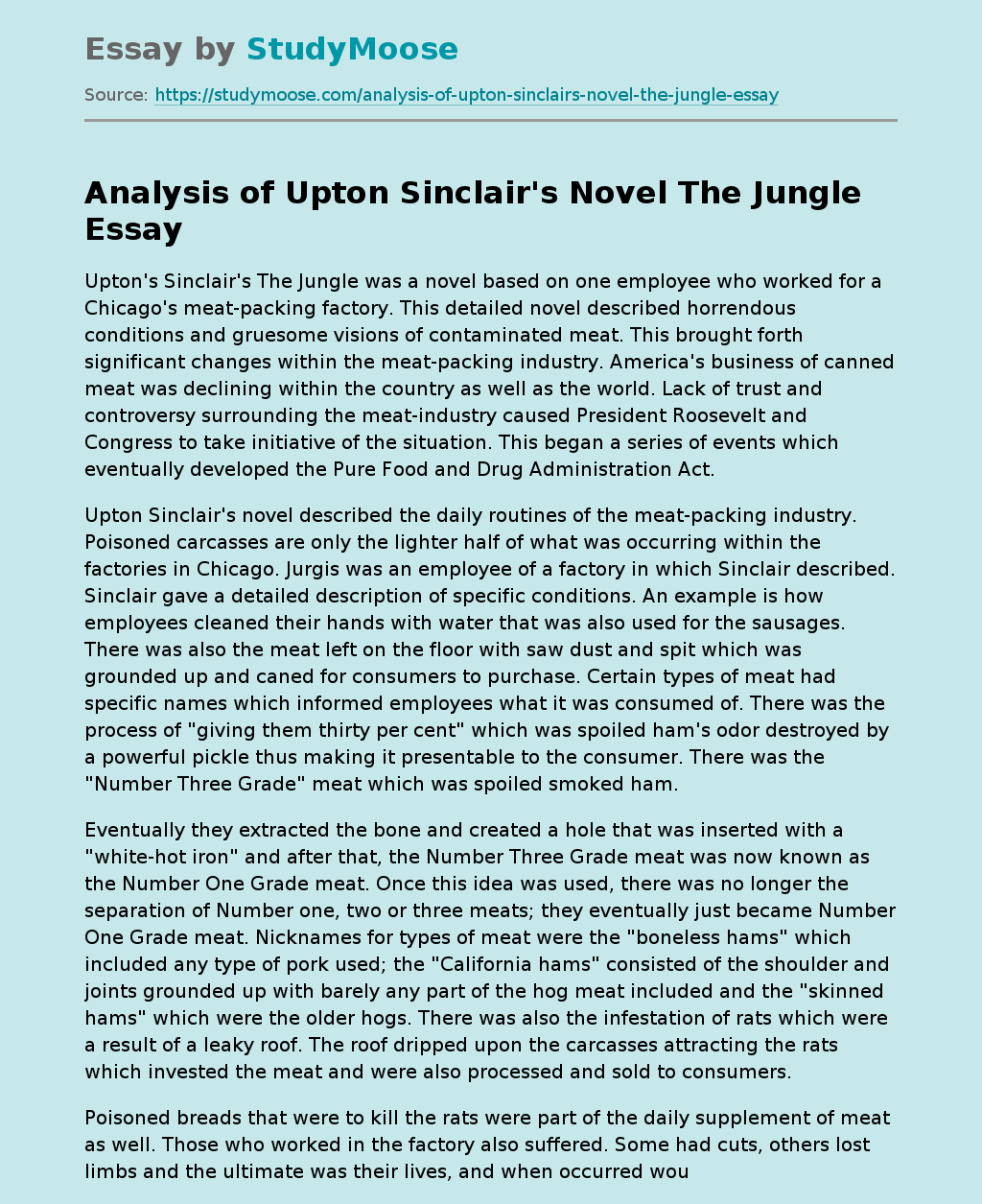