Ann from "The Painted Door" by Sinclair Ross

Because of John’s lack of communication skills, Ann feels isolated psychologically and emotionally, and as a result, she is seen by the reader as a woman in despair seeking companionship during the Great Depression.

Ann is dutiful and submissive, so typical of the women of the 30’s, as it is shown when she claimed, “Plenty to eat – plenty of wood to keep me warm – what more could a woman ask for?”(p.48) even though it is clearly the opposite of what she really wants.

Don't use plagiarized sources. Get your custom essay on
“ Ann from “The Painted Door” by Sinclair Ross ”
Get custom paper
NEW! smart matching with writer

She says to John “I know. It’s just that sometimes when you’re away I get lonely…” the hesitation in this particular sentence explains her powerful desire to have someone to talk to, yet is afraid of John’s response.

But we think Ann is more than just what she appears to be. There are moments where her rebellious personality is shown, such as when she went out of the house during the blizzard to feed the animals when John had plainly stated to her, “Everything’s fed and watered, and I’ll see that there’s plenty of wood in.

” This depicts Ann’s willingness to go so far as to distract herself from her loneliness. Also, the way she beseeches John to stay and the way she reacted, “She glanced up sharply, then busied herself clearing the table…” (pg49) at the mention of a visit by Steven shows that she presents some good intuition and intellect as to what may happen.

One can argue that Ann is unconsciously selfish and even ungrateful, for John is constantly trying to please her by working continuous hours without aids of others.

She also has a roof over her head and food in her tummy that so many lacked during that era, and yet, she gives hints that she is highly unsatisfied of her current situation and commits adultery. However, the lack of companionship, increased by the barrenness of the surroundings in which the character lives in, makes Ann desperate for anything that would get her out of her miserable existence. As we know, humans are extreme social creatures, and when Steven arrived on her doorsteps with his, quote, “still-boyish face” (pg57) and “his lips drawn in a little smile that was too insolent, but at the same time companionable”(pg57) , Ann forgets all rules and drops her mental barrier, giving into what she desires the most: companionship.

So in conclusion, we feel that Ann is a woman with an extremely good heart, but is misguided into doing wrong actions by the isolation and loneliness in which her husband had ultimately caused.

Ann from "The Painted Door" by Sinclair Ross. (2016, Jul 18). Retrieved from https://studymoose.com/ann-from-the-painted-door-by-sinclair-ross-essay 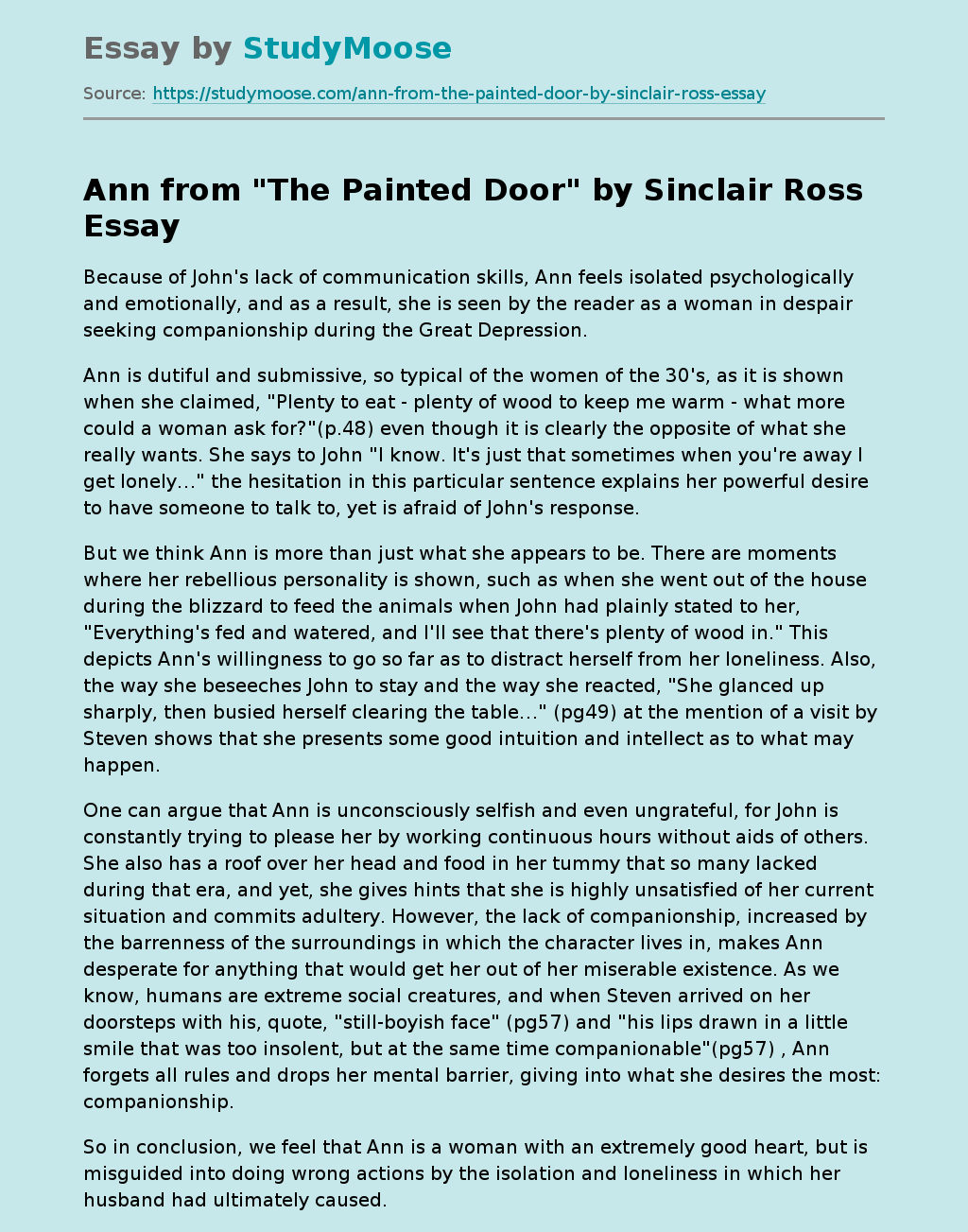