This paper expounds on the life and design style of Ruby Ross Wood. Her abstract life was during the cookie cutter times of the 1900’s. During these times the everyday woman went from being a homemaker to earning wages and being a prominent member of society. It was an excellent time in history when the women of the world stood on the threshold of greatness. The world desperately needed an eccentric, intelligent, and strong female designer in the public eye who would forever change the way we look at design and what is beautiful.

Don't use plagiarized sources. Get your custom essay on
“ The Design Philosophy of Ruby Ross Wood ”
Get custom paper
NEW! smart matching with writer

Being a descendent of several families prominent in America since Colonial times, Ruby Ross was destined to greatness. Her youthful charisma and sharp tongue won the hearts of many people in the public. During her years as an interior designer, Woods accomplished extraordinary things. Though many say her death cut her life and success as a designer short, she left behind many works that generations to come will still be enjoying.

Ruby Ross Wood Though many people around the world may be unsure of what to think of Ruby Ross Wood’s personal conduct, she was still a popular designer whose vision astounded the world.

Her design work was a great combination of “de Wolfe’s often stagy European style and the more reservedly American, less precious look of another tastemaking Elsie, Elsie Cobb Wilson” (Petkanas). It may be that Ruby Wood’s bold interesting writing that contributed to her design genius in early days, but the later days her use of colors and bold concepts is what opened people’s eyes to her true brilliants.

A compound looks at her road to greatness, the issues she faced as a new designer and her legacy after her death.

Road to Greatness Ruby Ross Wood was born October 26, 1881 in Monticello, Georgia. She was the eldest daughter of a successful cotton broker. Wood’s first husband, Wallace Field Goodnow, was an engineer from a well-known family. Wood’s had a son with her first husband, but he died as an infant. Wood’s second husband was Chalmers Wood, a well-connected stockbroker who enjoyed fox hunting. They lived at an estate in Syosset, New York called Little Ipswich. The architect William Adams Delano designed Little Ipswich for them.

The 29-acre property was leveled in the early 1990s and replaced by a 21-home housing complex called Pironi Estates. Mrs. Wood’s journalist career began after she moved to New York. She served as a ghostwriter, under editor and Chief Theodore Dreiser, writing poems, articles, and fiction about interior design. The magazine “The Delineator” was a popular women’s magazine. She also wrote a series of articles based off a collection of lectures on interior decorating by Elsie de Wolfe, and later was the foundation for the very successful book, The Honest House.

The articles Wood’s wrote for The Delineator, under the guide of decorator Elsie de Wolfe, later formed de Wolfe’s decorating manual The House in Good Taste. “Wood’s also become the ghostwriter for de Wolfe’s Ladies Home Journal articles, which later were became The House in Good Taste, and continued to contribute articles to leading shelter publications until her death (Wikipedia contributors). ” 1914, Wood’s founded the design company Modernist Studios, but this venture failed due to the lack of public interest in decor inspired by the “cutting-edge” designer Wiener Werkstatte.

Nonetheless Woods found her passion. Soon after Wood’s started working as a part of the decorating staff of the John Wanamaker store in New York City. There she ran Belmaison, a decorating division within the company, and worked with Nancy McClelland, who ran the Au Quatrieme antiques department of the store. She established her own decorating firm in the 1920s. Mrs. Wood’s had many clients, among them there were quite few notable characters: Alfred Vanderbilt, Rodman Wanamaker, and Brooke Astor.

Her best-known employee was Billy Baldwin (interior designer), whom she hired in the 1930s and who eventually became known as “the dean of American decorating”. According to Baldwin, Wood’s professional credo was: “The final judgment in decorating is not the logic of the mind, but the logic of the eye. ” (Wikipedia contributors). Mrs. Wood embraced many different cultural designs, and preferred to design with old world intent rather than embrace modern design. Her Death and Legacy Ruby Ross Wood died 1950 of lung cancer.

She was described by many as eccentric, but was best described by Mitchell Owens who wrote: “Ruby Ross Wood was an anomaly when compared with the other prominent decorators of her day. She was not a charter member of the international social set, like Elsie de Wolfe. She was not a beautiful society divorcee, like Dorothy Draper. And she most decidedly was not a glamorous kept woman, like Rose Cumming. Instead, Ruby Ross Wood—chain-smoking, impatient, tart-tongued—was what used to be called a working girl. ” Ruby Wood did not start her career with the intention to become a world famous interior designer, but she did become one.

She was different in many ways from the interior decorators of her time, but from the looks of things that is what made her work so exciting and vibrant. She is also a great example of realizing and pursing your dreams. She found her passion in life and followed through to the end, and even when she failed she kept going. When thinking of Ruby Ross Wood you should not only admire her design style and eye for colors, but also her spirit. We will forever see her designs in books, articles, and even in our homes. She broke the mold of interior design style, and opened the door for future generations of designers. 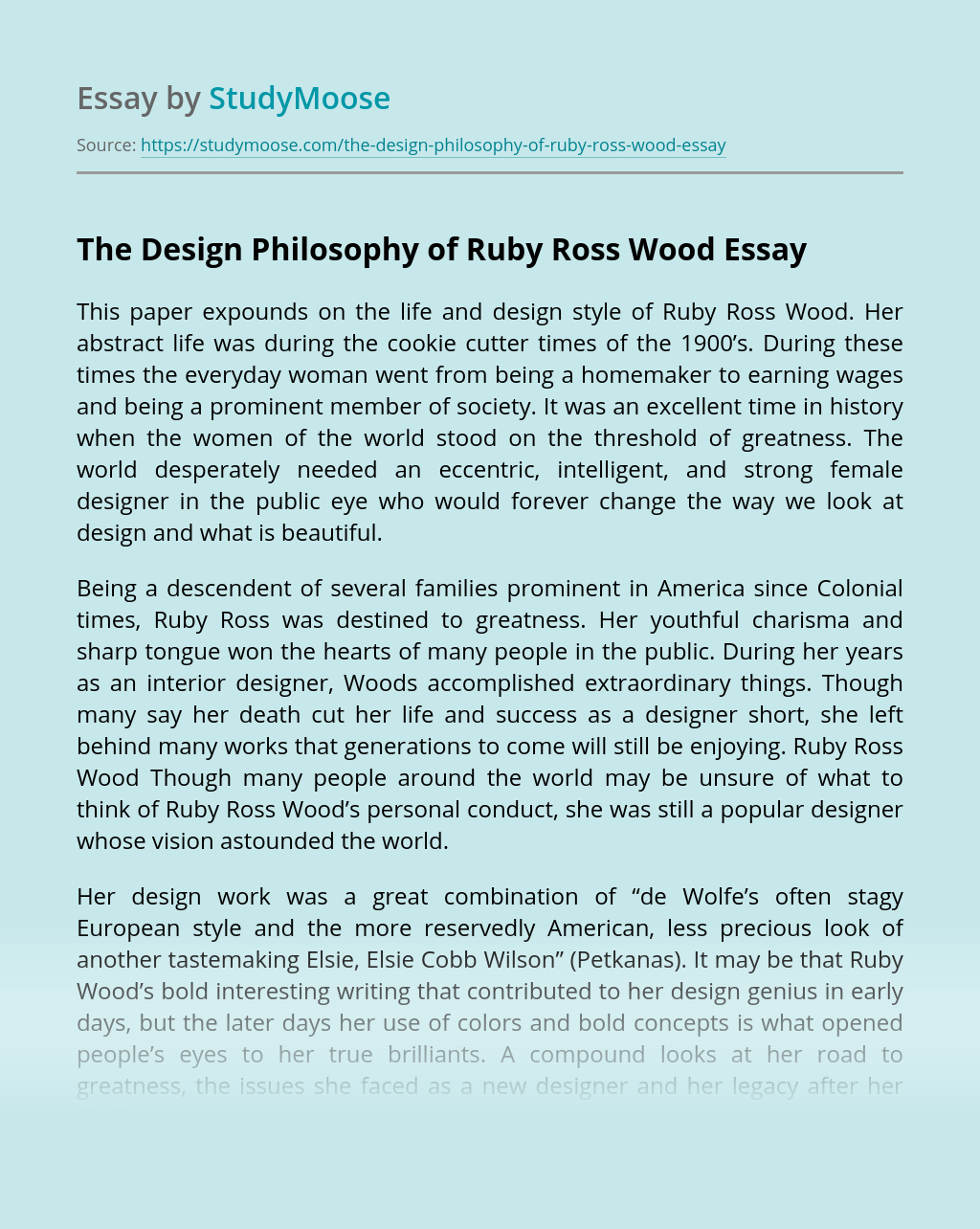